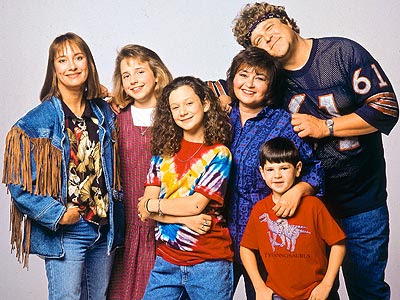 The first item on the agenda is the current Roseanne giveaway that’s in place here at Thrilling Days of Yesteryear—I have free copies of The Complete Third Season and The Complete Fourth Season of the 1988-97 sitcom to give away, and all you need to do to enter is drop me an e-mail (with “Roseanne giveaway”) at igsjrotr(at)gmail(dot)com before 11:59 PM EDT this Sunday (May 6) for a chance to win.  I had a chance to revisit the show (courtesy of Barbara at TVFlashbacks.com, which is offering these and other classic sitcoms with a discount that you can find on this page) recently and was pretty pleased that it continues to hold up as well as it does.  Your DVD library is practically naked without it. 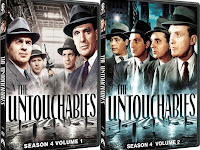 Speaking of TV-on-DVD, TVShowsOnDVD.com announced this week that CBS DVD-Paramount will let the final shoe drop on July 24th with the release of the fourth and final season of The Untouchables…a rather interesting example of “serendipiteevee” because I often watch reruns of the show on Me-TV on nights when I can’t sleep and I mused to myself a couple of weeks ago as to when they would getting around to completing the show’s entire run on disc.  Because this is CBS-Paramount we’re talking about, the fourth season will naturally be released in split-season volumes—the details haven’t been officially announced but I’m guessing that since the final season of Untouchables produced thirty episodes that will mean 15 to a set, and 4 discs in each should cover it.  (They did provide box art for both sets, which you can see at your upper right.)  CBS-Paramount will not be offering these two volumes in a shrinkwrapped bundle (they’ll have to be purchased separately) but they do plan to offer all eight volumes in a "Complete Series" packaging that will contain no additional content in the form of extras or anything.  (They must not be feeling well.)  I’ve got the previously-released sets here at the house so I’ll probably end up investing in the last two as well. 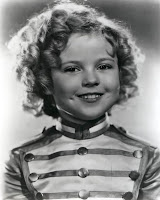 Our good friend Page at My Love of Old Hollywood has been wrestling with a few health issues of late, described on Facebook as the rockin’ pneumonia and the boogie-woogie flu.  No…hang on a second…that’s Johnny Rivers.  Page had a bout of walking pneumonia, and everyone here at TDOY is wishing her a speedy recovery (with a special shout-out from the folks in the mailroom) despite her continued efforts to associate me with the nauseating little moppet pictured to your left.

I’d also like to wish fellow classic movie blogger Dawn of Noir and Chick Flicks the best of good health; Dawn was diagnosed with breast cancer and was scheduled for surgery this past April 30 but promises to be up and about blogging in a month or two (Monty at All Good Things has temporarily taken over the Flicks rudder in her absence).  As someone who went under the knife two years ago I know that some of the best medicine is support from your friends, so I have my fingers crossed that she will be at her keyboard again soon.

You’ve heard me mention my very good friend Laughing Gravy on the blog many times—he’s the individual in charge of jujube cleanup over at In the Balcony.  With the economy still not able to walk around as hale and hearty as it has in the past, times are often tough for freelance writers and so if you could find your way clear to turning over some couch cushions for the necessary scratch to toss into his kitty (“Put somethin’ in the pot, boy” – Jack Kirkwood) it would be greatly appreciated.  Gravy’s got one of the best classic movie sites here on the Internets, and because he’s hesitant to whore ITB with advertising he could use a donation or two to keep things going (little luxuries like food, clothing and rent).  Thank you for your support, as the wine cooler guys used to say.

Over at True Classics, Brandie, Nikki and Carrie have set aside this month for movie memories—throughout May, they will feature reminiscences from classic film bloggers and other movie fans of all ages on their earliest experiences going to “the flickers” (including some guy who’s always whining that “nostalgia isn’t what it used to be”).  It promises to be an amazing collection of stories, and they’ve already left the other horses at the gate with their first entry, a wonderful post written by law professor and author Mary Libby Payne.  They’ll be doing their usual first-rate film posts as well, but you might want to make it a point to swing by with regularity and check out this feature. 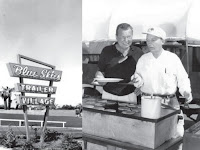 As fellow CMBA'er David Lobosco points out on both his Crosby-based blog The Bing Crosby News Archive and nostalgia blog A Trip Down Memory Lane, today would have been the 109th birthday of Der Bingle…and in one of those staggering coincidences that seem to occur with disturbing frequency in my life, yesterday I received an e-mail from Maureen, one of my closest online friends (whom I’ve known practically forever) who was nice enough to send me a PDF file of a brochure about a tourist attraction she recently visited in Rancho Mirage, CA.  invested in a bit of real estate that became known as the (they’ve since dropped the “trailer” from the name), which opened up in 1955 and according to Mo, “The radio stars (and stars from other media) showed up for an opening day celebration, after which the developers claimed that all of these muckety-mucks actually lived there!  In trailers.  Together.” 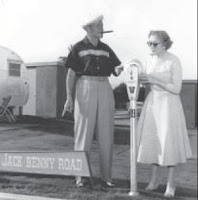 Anyway, the brochure (which you can download here) has some wonderful pictures of both movie and radio celebs (my favorite is the one with Phil Harris & Alice Faye sharing a smooch) and a hilarious paean to the village’s only parking meter, which was installed in Jack Benny’s honor (Maureen calls it “the Jack Benny Retirement Account”) and is pictured at the right with George Burns & Gracie Allen.  Mo told me that getting a picture of this was a must, and she provided me with a photo (she’s probably going to kill me for posting this, btw—“Now cut that out!”) of her striking a characteristic Benny pose. 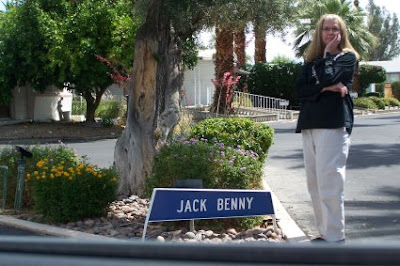 As for the Old Groaner…it sounds like an ideal time to watch Road to Utopia again today.  Meeting adjourned.
Posted by Ivan G Shreve Jr at 12:00 PM

Ivan,
Another fun round up! Just seeing that little moppet making an appearance on your blog has me smiling and feeling better. Did you lose a bet somewhere?

Lots of fun stuff coming up.
Thanks for the get well wishes. I would give you a hug but then with your luck pneumonia would turn into Mad Cow or something weird.
Page

Thanks a bajillion for the shout-out! We are seriously looking forward to reading your contribution.

I can't believe you willingly put a picture of Miss Curly Top herself on your blog ... you MUST be very concerned about Page's health!