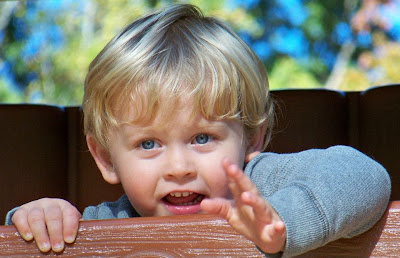 The first item on the agenda addresses the natal anniversary of my nephew Davis (pictured above), who is celebrating Birthday Number 3 today and hosting two parties: one earlier this morning at a park pavilion here in the Classic City (a “Chocolate Bubble Party,” which featured cupcakes and much bubble making) and one later this evening at his home at “The Double K Ranch.”  Because of this social obligation, TDOY’s weekly Serial Saturdays excursion will be postponed until tomorrow…it will spotlight the final chapter of the thrill-a-minute serial Jungle Queen (1945), meaning our long national nightmare will at last come to an end. 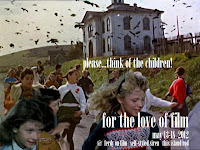 The nephew’s third birthday isn’t the only event that’s been keeping me busy of late: I’m also racing a deadline to complete a project for the good people at Radio Spirits…which is why I regretfully didn’t get to put up something for this year’s For the Love of Film III Blogathon.  I had every intention of slapping something together—I’ve been a Hitchcock devotee since the time the ‘rents allowed me to watch Frenzy (1972) with them on TV back in the seventies (my folks didn’t want me watching All in the Family, but apparently had little objection to a film about rape and necktie murders…figure that one out if you can).  I just couldn’t find the time to work it in, but I’d like to stress that my slackitude shouldn’t discourage you from putting something in the pot (boy) for a worthy cause like film preservation (the take this year is regretfully small, so do what you can).  My apologies to her Sirenship, Ferdy (on Films) and Rod for having to bow out like this at the last minute.

I recently received the honor of being asked by Jill Blake (of Sittin’ on a Backyard Fence) and Will McKinley to be a guest contributor at the collaborative blog The Cinementals, and popped the champagne cork on that puppy with this inaugural post explaining the wackiness that goes on here.  There just aren’t enough adjectives to describe my delight at being among such distinguished company, particularly since many of my blogging friends—Brandie of True Classics, Chris at Silent Volume, Cliff of Immortal Ephemera, The Lady Eve (positively the same dame!), etc.—are also part of the lineup, as well as other authors with whom I’m making fast friends thanks to both my charm and my mother’s pepperoni rolls.  I will do my darndest to keep you apprised of my comings and goings there and I hope you’ll make The Cinementals an essential part of your classic film blogging breakfast.

TVShowsOnDVD.com announced a pair of upcoming classic TV-on-DVD releases that I thought might be of interest to the TDOY faithful.  The first is that CBS DVD-Paramount is planning to release the last of Gunsmoke’s half-hour seasons (season six) to disc August 7.  The collection will be one of the company’s notorious split-season sets (gasp!) and since the info at TSoD indicates it’s a 3-DVD’er, I’m guessing about nineteen episodes will appear in the first volume (the series had thirty-eight episodes total in its sixth season) and the remaining nineteen for the wrap-up.  You know, if my math is right—that would mean that a complete season set would comprise six discs…do you honestly mean to tell me CBS-Paramount couldn’t sell these furshlugginer collections without having to…okay—I promised myself I wouldn’t rant about this in the post.  I’m just grateful they continue to make the shows accessible to fans, and with the completion of “Marshal Dillon” (the syndication title of the half-hour Gunsmoke) hopefully we’ll move speedily along to the hour shows (which are my favorites).

The other TSoD blurb is that the same company that’s jumpstarting The Life and Legend of Wyatt Earp on DVD, Inception Media Company, has acquired the rights to the 1957-63 sitcom The Real McCoys from former holder Infinity Entertainment.  Between 2007 and 2008, there were three complete season sets (1-3) released of the bucolic sitcom, and Season 4 was made available in 2010…but since that time, bupkis.  While it’s good news that Inception Media is on the case—the bad news is that the company is going to start back from the beginning, with The Real McCoys: The Complete Season One hitting the streets July 24th.  Seems like a lot of waste motion to me, and there’s really not much info on this release beyond an Amazon pre-order listing but if—and this is a very big if—I had assurance that the company had access to the original masters (Infinity used the edited-for-syndication prints, making their “complete season” claim a tiny bit bogus) I might entertain the notion of repurchasing them.  (Though I wouldn’t be happy about it.)  But if I could add my editorial two cents here—maybe the reason why Infinity forfeited the DVD rights is that it took them so freaking long between releases.

Before I skedaddle off to prepare for the birthday festivities I’d like to say how thrilled I am at the response to the blog’s Dark Crimes Giveaway (particularly after the lackluster reaction to the previous contest) and just remind you that if you’re interested in a chance to win this latest Mill Creek release (okay, technically it’s a re-release—but there’s some great stuff in this 50 pack: The Red House, Cause for Alarm!, The Scar (aka Hollow Triumph) and the 1948 movie tie-in to radio’s Inner Sanctum) shoot me an e-mail at igsjrotr(at)gmail(dot)com before 11:59pm EDT this Tuesday (May 22)…and make sure you include your name, address and e-mail.  I’ll draw and announce a winner the next morning…and if you’re not fortunate enough to be one of the lucky winners you can still purchase this set here (and take advantage of a discount code on this page).  Thrilling Days of Yesteryear—where the winning tradition continues!
Posted by Ivan G Shreve Jr at 4:00 PM

That is the most adorable picture of Davis I've ever seen! The birthday boy is undoubtedly in bed by now, but give him a big ol' happy birthday for me when you see him again.