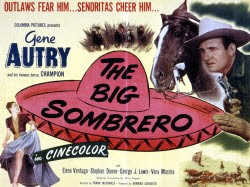 The Big Sombrero of today’s B-Western Wednesdays title is an impressive spread of a ranch “down Mexico way” where our hero, Gene Autry (playing himself), will wangle a job as foreman within the movie’s eighty-minute running time.  Things are not good for Autry after the opening titles finish, after singing the music standard You Belong to My Heart, he is forced to pawn his precious guitar for $17.00, explaining to the owner (Sam Bernard): “I’m not fussy myself…but I’ve got a horse out there in that trailer that likes to eat.”  (I had a little difficulty stifling a snicker during this scene because there was once a time in this country when pawn shop dealers were held only in slightly higher regard than lawyers…nowadays you can’t change the channel without seeing them as heroic stars of TV reality shows.)  Having scared up some walking-around money, Gene fortuitously runs into an old acquaintance of his named Angie Burke (Vera Marshe), a former sharpshooter turned dueña (Spanish for chaperone) for one Estrellita Estrada (Elena Verdugo), owner of the aforementioned big hat.  Angie suggests that Gene have a chat with Estrellita’s beau, James “Jimmy” Garland II (Stephen Dunne), about getting work at the ranch.

Gene and Jimmy are well-acquainted, though Gene is also well aware of Jimmy’s unsavory qualities.  In fact, the two men have a reunion when Jimmy is trying to outrun an angry band of rancheros, headed up by Juan Vazcaro (George J. Lewis).  Jimmy has insulted Juan’s wife, and when the rancheros are starting to catch up to Jimmy he whips out his six shooter and starts plugging away at the men…but because the rancheros are unarmed, Gene clips Jimmy and renders him unconscious.  Jimmy is enough of a good sport to hire Gene as foreman, however.

Then again…maybe not.  Gene starts to have second thoughts about the job when he meets the man (Martin Garralaga as “Felipe Gonzales”) whose job he’s taking as he gives a lift to elderly Don Luis Alvarado (William Edmunds), whose horse and buggy are frightened off by a gang of delinquents.  The reason why Jimmy wants Gene in as foreman is that he’s planning to marry Estrellita and sell the ranch to weaselly Ben McBride (Gene Roth, billed here as “Gene Stutenroth”)…and that’s why he’s been cracking down on the rancheros—he wants them off the ranch in order to move the sale along.  Gene decides that he’ll take the foreman job, but that he’s also keeping Felipe on as an interpreter…and with the help of Felipe’s grandson Tico (Neyle Morrow), he’ll assist the rancheros in the sale of their cattle to allow them to pay their debts to the ranch.  Jimmy and McBride’s job is to stop this from happening…but hey—this is Gene Freaking Autry we’re talking about…not even a landslide and a cattle stampede will deter that cowpoke from the proper path of justice. 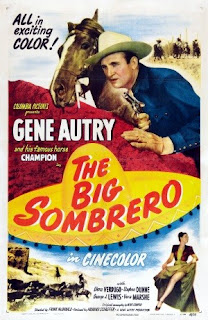 The Big Sombrero was touted as a “Gene Autry special” upon its initial release because it was one of two films (the other being 1948’s The Strawberry Roan) filmed in Cinecolor at Columbia, the studio Gene ended up at after leaving Republic in 1947.  was actually a revisit for me; I saw it and Roan on AMC when both films were featured as part of their first Film Preservation Festival in 1993.  I only saw bits and pieces of the film (it was a Sunday, and I had a little tidying up to do around the apartment) but for some reason I remembered the movie being better than it is.  A re-watch reveals that this is not the case.

Not that there aren’t lovely things to look at in this film—the major attraction is Verdugo, here in her starlet days (and many years before she took the gig for which I always remember her, faithful nurse Consuelo Lopez on Marcus Welby, M.D.).  Elena is vivacious and full of energy (she does a lively dance number at a fiesta in the film) but her character is irritating and shallow…and really, when you get right down to it, not likable at all.  Some of her scenes are embarrassing to sit through, notably a “comic” sequence where Autry kidnaps her, caveman-style, from a swimming pool at a dude ranch and then the two of them (along with Marshe and Edmunds) have an escapade behind the wheel of Gene’s truck as it bobs and weaves along a highway at top speed.

The problem is that her Estrellita, by dictates of the plot (written by Olive Cooper), is infatuated with caddish Jimmy and since he rarely rises above one-dimensional villainy they almost have to make Estrellita incredibly stupid to justify how she happened to fall in love with him.  Furthermore, the character starts to develop feelings for our hero as well…though that relationship is as chaste as a nunnery; she’s shown wearing a ring Gene gave her before the closing credits roll but they never even so much as exchange a kiss.  I realize that maybe I’m expecting a bit too much for a B-Western, but it’s almost as if the filmmakers thought shooting the darn picture in a cheap color process would be enough to satisfy discriminating audiences.  Roth, an old hand at western nastiness, manages to emerge unscathed because he really doesn’t figure too much into the plot (only as the bad guy in charge of it all); he even manages to inject a little humor in one scene where he first meets Autry as Gene enters Garland's office: "Don't get up." Autry says to him, prompting McBride to retort "I haven't sat."

Comic sidekicks like Smiley Burnette or Pat Buttram are sorely missed here; Gene must make do with a gawky, awkward kid named Tico whose antics aren’t the slightest bit amusing.  Tico ends up taking one for the team in the climax, and though you’ll probably think me hateful for saying this I sort of wish they had bumped him off earlier.  The direction by Frank McDonald is flabby and uninspired, the songs by Gene aren’t particularly memorable (save for the opening number) and though the movie is only an hour-and-twenty-minutes it plays longer for some reason.  There are also some continuity gaps that I haven’t been able to figure out as to whether it was due to the print I watched; in one scene, Garland’s henchmen (John L. Cason, Pierce Lyden) are pouring a bucket of water on their boss to revive him—the implication is that Gene socked Jimmy and sent him sprawling…but we never witness the punch.

I suppose it’s possible that my disappointment with Sombrero stems from the fact that I’ve always been an unapologetic Roy Rogers partisan…but the fact is that I do like some of Autry’s westerns—it’s just that I gravitate toward the ones that he made with John English at the helm, like Riders of the Whistling Pines, Rim of the Canyon and Sons of New Mexico.  So next week I’m going to indulge my Roy Rogers fandom with a film that was recommended to me in the comments section of the post I did for Night Time in —I was able to find a DVD of the movie at a great price during a recent clearance sale at Deep Discount.com.
Posted by Ivan G Shreve Jr at 3:00 PM