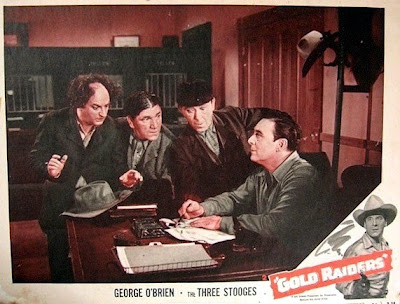 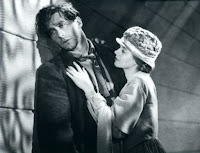 Chuck Anderson at The Old Corral muses that the movie career of screen cowboy George Joseph O’Brien (1899-1985) began and ended working for director John Ford.  A college athlete and amateur boxer (he was the Light Heavyweight boxing champion of the Pacific Fleet during World War I), he broke into the motion picture bidness in the 1920s as a stuntman and bit actor…and then got a big break when “Pappy” cast him as the lead in his 1924 epic The Iron Horse.  His silent work with Ford also included 1926’s 3 Bad Men and The Blue Eagle—the latter film teaming him with Janet Gaynor, with whom he would be reunited for what may very well be the greatest silent film ever made, Sunrise: A Song of Two Humans (1927). 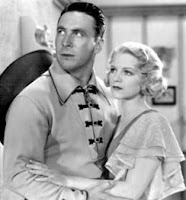 But by the 1930s, O’Brien had phased himself out of dramatic and comedic features (exceptions include the John Ford-directed The Seas Beneath in 1932 and 1934’s Ever Since Eve) and concentrated on being one of Fox’s big western draws, with a string of successful oaters (Riders of the Purple Sage, Frontier Marshal) that lasted until 1936, when he signed a contract to make a few pictures with independent producer George A. Hirliman.  The Hirliman-produced features, released by R-K-O, resulted in O’Brien’s being hired by that studio to make more B-Westerns…some of which turn up on The Greatest Cable Channel Known to Mankind™ from time to time.  That series of oaters only came to an end because George re-enlisted in the Navy in time for WWII (Tim Holt, who played O’Brien’s sidekick in several of them, inherited the series), serving his hitch until 1946. 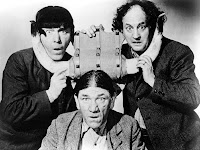 O’Brien’s picture work slowed down after his discharge; his old friend Ford put him in the cavalry in Fort Apache (1948) and She Wore a Yellow Ribbon (1949) but it wasn’t until independent producers Bernard Glasser and Jack Schwarz took a gamble on jumpstarting a new O’Brien series in 1951 that the actor returned as the headliner…and this time he had to share credit with three of the best comic-relief sidekicks a cowboy could ask for.  I know you’re probably thinking this is a typo, but George O’Brien stars in the 1951 sagebrush saga Gold Raiders alongside Moe, Larry and Shemp—the Three Stooges.

In Raiders, O’Brien (playing himself) is a retired marshal-turned-insurance investigator who finds himself ambushed outside the hamlet of Red Mesa.  The bandits, supervised by greasy henchman Clete (John Merton), are prevented from doing bodily harm to George when they are surprised by a peddler’s wagon traveling the same road…one being driven by the Stooges.  O’Brien thanks the trio for helping him out of the tough spot, and the four of them arrive in town—O’Brien to offer his services to mine owner John Sawyer (Monte Blue), and the boys to hawk their wares in a nearby saloon.  (The saloon is owned by the villain of the piece, a sebaceous gentleman who answers to “Taggart” and played by the always reliably evil Lyle Talbot.)

O’Brien returns the favor of when the boys helped him out of his jam by rescuing them from being strung up by the irate clientele of Taggart’s bistro, and he hires Moe, Larry and Shemp for a special assignment.  The Stooges will transport a gold shipment via their wagon while George rides herd on a decoy caravan that will hopefully distract the men working for Taggart from helping themselves to its contents.  It’s a bold plan…but unfortunately all does not go well because the grandfather (Clem Bevans) of George’s office assistant, played by the lovely Sheila Ryan, inadvertently spills the beans about O’Brien’s scheme to Taggart…and his men ambush the Stooges, making off with about $4200 in gold.  The upside to all this is that because O’Brien pays off on Sawyer’s loss so quickly the other mine owners decide to do business with Mutual of O’Brien, and pretty soon the gold shipments are making their way out of Red Mesa regularly with much success.

Taggart, not to put too fine a point on it, is pissed.  He has Clete try to shakedown Grandpa for information on the next shipment, but Gramps (formerly the town doctor, now the town tosspot) doesn’t know anything.  So Taggart convinces Doc Nightcap that if he doesn’t agree to help him he’ll let everybody know that it was Grandpa’s information that led to his success in the first robbery (not the truth by any means, but Taggart’s the bad guy—whatcha gonna do).  Gramps lays a trap for George and the good guys…or does he?  No, he doesn’t—he arranges for George to defeat the bandits (including a knock-down-drag-out tussle with Taggart that takes a little longer than it should, suggesting George has been at the same all-you-can-eat joint as Johnny Mack Brown) and as the film comes to an end, O’Brien and the Stooges ride off into the sunset…presumably to return again.

Unfortunately, this was not the case.  Despite the fact that George, Moe, Larry and Shemp all work very well together, the idea for further O’Brien/Stooges oaters (they had planned to make a total of three) was shelved and after its initial 1951 release, Gold Raiders made a return appearance to screens in 1958…then was edited for 8mm home movie audiences in two abridged versions.  Before its release to DVD in 2006 by Warner Home Video, Raiders was a difficult film to track down—I scored a rootpeg VHS copy from a collector in the 1980s and despite the film’s Grade Z-budget (writer-director Edward Bernds shot it in five days with one camera and later lamented that the film didn’t do him any favors with regards to his directorial ambitions in Hollywood) I think it’s a pretty entertaining little vehicle.

Much of your enjoyment of Gold Raiders will depend on your Stooge tolerance, I will admit up front.  I love the movie because it’s one of few times that Shemp Howard appeared in a feature film with Moe and Larry.  We’ve discussed this on the blog in the past, I know, but like Jack Warden’s character in While You Were Sleeping…I like Shemp—he’s my favorite Stooge.  Curly Howard was a talented comedian, no question about it…but he wasn’t ever going to be anything other than Curly of The Three Stooges.  Shemp had more versatility, working alongside the likes of W.C. Fields, Olsen & Johnson and Abbott & Costello—I can’t imagine Curly ever working with Bud and Lou (probably because Lou supposedly cribbed a lot of Curly’s act).  I’ll also cop to the fact that despite the fact the Stooges and O’Brien appear to have the same amount of time to shine, a lot of the boys’ material isn’t particularly strong (they do a few stand-bys like “Sovereign State of Texas” and “Paganini” but my favorite bit is their barbershop quartet harmonizing in a brief scene where they’re driving their wagon)…I chalk that up to the fact that they’re essentially having to do twice the amount of onscreen time than normal (out of their two-reeler bailiwick, you might say).  (If you want a really good example of a first-rate western-comedy starring the Stooges, check out 1950’s Punchy Cowpunchers.)

O’Brien can still convincingly play the cowboy hero (well, except for a few places when it’s obvious stuntman Hugh Hooker took over) and both Talbot and Merton provide prime villainy when it’s needed.  Sheila Ryan is solid in the ingénue role; I thought it was sort of interesting in that this is the second time I’ve run into Sheila this week (Mom and I saw her in the Jungle Jim vehicle Jungle Manhunt this past Monday).  I also chuckled a bit when I spotted fellow West Virginian Fuzzy Knight as Red Mesa’s law-and-order; all those years sidekicking landed him a promotion.

After Gold Raiders came and went, George O’Brien bid his movie career farewell with a brief appearance in John Ford’s Cheyenne Autumn (1964).  During his heyday in the late 30s/early 40s, he was ranked among the top cowboy stars in polls conducted by both Boxoffice and The Motion Picture Herald—and though Gold Raiders isn’t necessarily representative of his best film work (it’s a “guilty pleasure” among a few B-Western fans, but still) when it came to delivering the action goods he never disappointed.  My saddle pal Toby at 50 Westerns from the 50s did a nice post on this movie back in April with a little additional info; if you’re curious to have a look (it’s where I cribbed the lobby card, btw).
Posted by Ivan G Shreve Jr at 11:00 PM

I love the Stooges, and like Shemp a lot, but I found this one pretty tedious. May be worth another look though. I do remember being surprised at how shoddy the film looked. The Columbia shorts look like David O. Selznick productions in comparison.

I'll skip this one, Ivan--I loathe the Stooges. How does one go from Sunrise to this...poor O'Brien.

So many actors I like, and yet, the Three Stooges.

I will say this: despite the cheapity prevalent in Gold Raiders, the print on the WHV DVD looks pretty snazzy. (And in the film's defense, it was an independent production as opposed to studio product, which is probably why the Columbia shorts look so sumptuous.)

As for Kim and Stacia's shared revulsion for all things Stooge...well, to quote my nemesis Meg Ryan in Joe vs. the Volcano: "I have no response to that."