Even when a movie claims to be a true story, not every plot point in the film should be regarded as true and factual. Events are often compressed and characters are often composites for dramatic purposes. Some are completely fabricated in order to avoid an unfair portrayal. So even though Call Northside 777 (1948) claims to be true, it should be taken with a grain of salt. 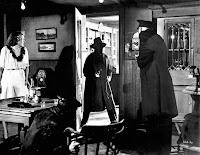 The story begins in 1933, when a patrolman is gunned down in a speakeasy. Two men, Frank W. Wiecek and Tomek Zaleska (Richard Conte and George Tyne), are railroad on flimsy evidence for the crime. Eleven years later, an ad appears in the Chicago Times, offering $5,000 for information that will clear Wiecek.
Reporter Jim McNeal (James Stewart) is assigned to follow it up. The ad was placed by Wiecek’s mother, who has spent the past 11 years scrubbing floors to earn the reward money in the hopes that someone might come forward. McNeal’s human interest story captures the imagination of the Times’ readers, leading to a follow-up, and soon McNeal is convinced there may be something to Wiecek’s claim of innocence. 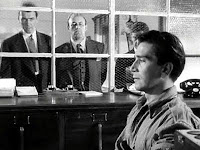 What follows is high drama (mostly) of the Times’ efforts to win Wiecek his freedom. I say mostly because there are some scenes that seem to drag on forever, such as when Wiecek is undergoing his lie detector test, and McNeal is pounding the pavement in search of the woman whose sole testimony is responsible for his Wiecek’s conviction. I can appreciate that such details were intended to convey the lengths to which McNeal and the Chicago Times go to win Wiecek’s case, but on film, they drag on interminably.
The film’s eventual resolution is a contrived yet effective plot device, but for the filmmakers to claim that it stems from true events is a disservice to the more naïve members of the audience. But that’s Hollywood; just as a newspaper will skew a story in the interest of stimulating public opinion – and thereby boosting readership – so to will Hollywood discard the lesser parts of a story in favor of something more dramatic.

Like the classic axiom of another James Stewart film, “When the legend becomes fact, print the legend.” In other words, never let facts get in the way of a good story. Call Northside 777 is a good story, but it shouldn’t be taken as gospel.
It features fine performances from James Stewart, who by now has perfected his “ordinary man fighting for an idealistic cause,” which we’ve seen in Mr. Smith Goes to Washignton and It’s a Wonderful Life, and Lee J Cobb, who co-stars as McNeal’s editor, Brian Kelly. Henry Hathaway directed the film, and according to the opening credits uses many of the actual locations featured in the story.

Mark Stevens both directs and stars in Cry Vengeance (1954), playing ex-cop Vic Barron. Three years ago Barron was framed for being on the take and was sent up. His wife and daughter were also killed in a car bomb meant which scarred him for life, and he blames crime boss Tino Morelli (Douglas Kennedy). Now that Barron’s out of prison, he’s looking for a little payback, if he can find Morelli.
Barron visits one of the local mob hangouts, where he runs afoul of hoodlum Roxey Davis (Skip Homeier). The old grudges between cop and criminal soon rear their ugly head, and Barron pays a visit to floozy Lily (Joan Vohs). She fesses up that Morelli has “retired” to the small fishing , . Steaming with anger, Barron catches the first plane out of .
There, Morelli has settled down to a quiet life with his daughter, Marie (Cheryl Calloway), with lackey Johnny (Mort Mills) keeping him apprised of the business back home. Word reaches them that Barron’s on the way, so they begin to make ready.

Reaching , Barron starts looking for Morelli with a big chip on his shoulder, but that’s soon whittled down to size by a local tavern keeper, Peggy Harding (Martha Hyer). She tries to soften Barron up, while trying to keep him from locating Morelli. It seems Barron is the first man to catch her eye in some time, but she knows he’s on the path to doom and destruction.
Meanwhile, Roxey has orders from to go up to and take care of Barron/Morelli problem permanently, and while he’s at it, take Lily along for the ride. He’s only too happy to do so. Only he gets it into his head that Morelli’s the easier target, and with him dead, Barron makes the perfect fall guy.

So while Morelli lies dead in a ditch, Barron pays a visit to his home, where he find little Marie. Having lost his own child, it’s just the tonic to make this Grinch’s heart grow big enough to let go of his need for vengeance. With Peggy’s help, he regains his mental balance and takes care of Roxey to boot.
It’s typical crime thriller fare of the day, trying hard to rise above its mediocre pedigree. It does okay, but Barron’s constant steaming over his desire for revenge becomes a bit tiresome. Peggy is way too attractive to remain single in for long. Perhaps the caliber of desirable men where she lives is somewhat lacking, but clearly her standards aren’t too high when she takes a shine to a self-destructive and physically scarred ex-convict. For me, the high point of the film was seeing future Mel Cooley Richard Deacon in a bit part.
Posted by Ivan G Shreve Jr at 4:00 PM

I enjoyed Call Northside 777 quite a bit. Some strong performances and some great location shooting.