Guest Review Double Feature: I Wake Up Screaming, Then I Walk Alone

By Philip Schweier
With Mrs. Wife out doing the Black Friday thing, I availed myself of a film noir double feature, courtesy of Netflix.
Part the first was I Wake Up Screaming (1941), directed by H. Bruce Humberstone and starring Victor Mature and Betty Grable. Mature plays Frankie Christopher, a moderately successful promoter who is out on the night club circuit with pals Jerry MacDonald (William Gargan), a newspaper columnist, and Robin Ray (Alan Mowbray), an actor whose career has taken a downward turn. Taking a cue from Pygmalion, the three take a shine to a waitress, Vicky Lynn (Carole Landis), and convince her they can turn her into the hippest thing in society. She’s no gullible kid from the sticks, but nevertheless, she rolls the dice. 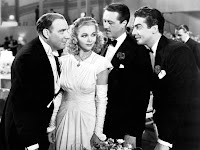 Much to her delight, the brain trust comes through. She’s a model; a socialite; a singer; and becomes famous for being, well, famous. Much like the attention-starved media-magnets of today (*cough* Kardashian *cough*), she starts to believe her own publicity and evolves into a self-serving tramp. So when comes a-calling, she throws all three of her suitors to the curb and catches the westbound – literally.
All of this is told courtesy of dual flashbacks as police simultaneously question Frankie and Jill Lynn (Betty Grable), Vicky’s sister. She also tells of a strange man whom she had seen lurking about, watching her. The cops call in Inspector Cornell (Laird Cregar), only to have Jill finger him as her sister’s stalker.

Frankie is suspect #1 in Vicky’s murder, but his two buddies each become a “person of interest” as it comes to light she’d been playing them all, handing out house keys like Halloween candy. But the D.A. is taking a shine to Harry Williams (Elisha Cook Jr.), the young man who mans the front desk in Vicky’s apartment building (those front desk clerks, there’s always something hinky about ‘em).
(Ivan’s note: “Hardy har har…”)

As the investigation ensues, Jill seems more inclined to believe Frankie didn’t kill her sister, a notion borne out when Frankie asks her out and she accepts. After an evening of all the finest entertainment has to offer, she’s convinced of Frankie’s innocence, and is prepared to return to Frankie a rather damning note he had written Vicky. Cornell steps in, but Jill helps Frankie take it on the lam.
Now, as much as I enjoyed this little thriller, here’s what has me flummoxed: Nowhere in the history of is the song “Somewhere Over the Rainbow,” used more than in this picture. Not even in The Wizard of Oz (1939), released two years prior by another studio. It’s Jill’s theme, playing anytime she’s on-screen, even when she and Frankie break into a bicycle shop to use a hacksaw to free him from Cornell’s handcuffs. 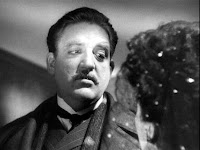 Escapee Frankie begins looking into Vicky’s death, aided and abetted by Jill, who’s providing the clues. Naturally, she can’t go to the cops; that skeevy Inspector Cornell intimidates her. In fact, he intimidates everyone, and in my opinion Laird Cregar was a talent who left us too soon, having passed away in 1944 at the age of 31. In every movie I’ve seen him in, he gives a first rate performance.
In the end, of course, Frankie is able to expose the real murderer and give Cornell his comeuppance. The movie has ample twists and turns without getting silly, and if you haven’t seen this tasty little film noir, I recommend you do.

Part deux of my day-off double feature was I Walk Alone (1948). I was disappointed with Tough Guys Burt Lancaster and Kirk Douglas, I expected better. The problem lies not with their performances, but with the pace of the film that seems to move slow as molasses, courtesy of writer Charles Schnee and director Byron Haskin.
plays Frankie Madison, a former bootlegger who’s just been released from prison after 14 years. The first 30 minutes of the film relate his reunion with Noll Turner (), with whom he seems to share some bad blood. Turner operates a swanky nightclub, the Regent, so he arranges a little dinner for Frankie with his singer/girlfriend Kay Lawrence (Lizabeth Scott), hoping he’ll drop his guard and reveals his plans following his unfortunate incarceration.

Frankie explains to Kay how he and Noll were on a run one night at the end of Prohibition and had just crossed the border into the States when they were set upon by would-be hijackers. A running gun battle turned fatal but they got away. Knowing the cops would be after them, the two decide to split up to better their chances, with a promise of whatever happens, it’s 50/50 all the way.
Now, 14 years later, Noll is in the chips and Frankie is just another ex-con, and he’s looking to collect his share. Noll hands him a check for $3,000, his share of the speakeasy they used to run. Dave (Wendell Corey), an old pal from Prohibition days and now Noll’s bookkeeper, explains how the old joint fell on hard times in the wake of repeal and the Depression. 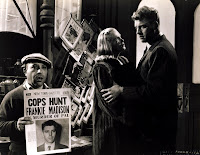 Feeling cheated, Frankie enlists the aid of Nick Palestro (Marc Lawrence), who rounds up a handful of guys to muscle in on the Regent. Unfortunately for Frankie, Noll has the Regent tied up with so many corporate rules and legal agreements, Noll couldn’t give him a piece of it even if he wanted to. Feeling betrayed on all fronts, Frankie vows revenge, and Dave is sympathetic enough to turn in his resignation.
But you don’t resign from the mob, and when he meets his end and the crime is laid at Frankie’s door, he promises retribution, swift and terrible. Of course by now, Kay has bailed on Noll also, partly for beating up Frankie, but mostly for throwing her over for a wealthy socialite (Kristine Miller).
It’s a good story, and Kirk Douglas is in top form as a major league essobee, though ’s frequent rages get tiresome. The pace just moved too slow to suit me.

Philip, you've done another fine job of pinch-hitting for Ivan! I'd never seen I WALK ALONE (other than the brief bit used in DEAD MEN DON'T WEAR PLAIN :-)), but your review encouraged me to seek it out.

I'm more knowledgeable about I WAKE UP SCREAMING, as it's one of my favorite early film noirs. Another great review, including a timely comparison of Vicky Lynn's meteoric rise to the top a la the Sisters Kardashian. Great job, Philip!

By the way, if you or anyone else here is interested, I blogged about I WAKE UP SCREAMING back in April. Here's the link:

Have a great holiday season!

As a follow-up to your interjected note, Ivan, may I add: Nyah ha ha!

I always Walk Alone after I Wake Up Screaming... because all that screaming scares everyone else away!