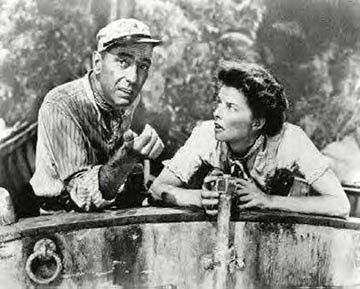 Before The Maltese Falcon, Casablanca, The Treasure of the Sierra Madre, In a Lonely Place and so many more Humphrey Bogart films got tucked under my cinematic belt there was The African Queen (1951)—a movie I was positively mad about as a kid (it may very well have been my first “adult” movie after a steady diet of Walt Disney flicks) and because I volunteered to pay it tribute on its 60th anniversary today at Edward Copeland on Film…and More, I was delighted to see that it still holds up as a true-blue classic after convincing the ‘rents to watch it with me two Saturdays back.  (Mom didn’t take much cajoling, since it's one of her favorite movies and in fact, she introduced me to Queen…but Dad was a little upset because while it was on he was missing vital reality show programming in the form of shirtless guys being dealt with severely by law enforcement on Cops.)   I state in the essay that it would be an ideal film to induct classic film-adverse audiences to the wonders of our cinematic past; it’s an astonishing blend of adventure, romance and comedy plus it was filmed in Technicolor…keep in mind, too, that Queen was produced outside the “studio system,” making it one of the first important “independent” films both in terms of money (it cleaned up at the box office) and prestige (it’s become a regular on those AFI lists trotted out every few years or so). 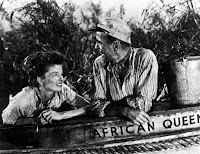 The African Queen had been absent from DVD before March 2010 save for a few Region 2 releases; I purchased one back in 2007 from Amazon.co.uk and then later acquired the Region 1 disc…and the difference is literally night and day.  The Region 1 release’s restoration is positively breathtaking (allowing you to drink in Jack Cardiff’s lush cinematography) and it also includes a nice little documentary entitled Embracing Chaos: Making The African Queen that is chock full of interesting anecdotes and information.  But the important thing is that Queen is finally accessible to a new generation of moviegoers, who can enjoy one of Katharine Hepburn’s finest performances (this is without a doubt my favorite Hepburn film) and the Oscar-winning turn by Bogie himself as a besotted ship captain who finds true love with the unlikeliest object of anyone’s affections: “a crazy, psalm-singing, skinny old maid.”

Confession being good for the soul, I must come clean and admit that I had every intention of putting together something for Meredith’s Bogie Blogathon over at Forever Classics but as it has happened so many times in the past, time slipped away from me and caught me flatfooted.  Fortuitously, the anniversary of Queen came up and allowed me to hoist a flute of champagne to it but you have to mosey over to ECOF and read the full story there.  (What can I say, Meredith…I desperately need courses in time management.)

Thanks for participating! I'm so glad to see that others are remembering The African Queen's anniversary