“Put your pants on, Spartacus…” 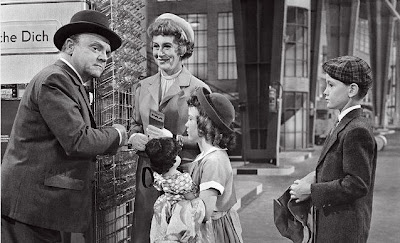 Fifty years ago on this date, Billy Wilder’s Cold War comedy One, Two, Three premiered in movie theaters…and this is the very first Wilder film I remember seeing (yes, even before Some Like It Hot, The Apartment and a gazillion other classics) though my muddled memories of childhood could only conjure up that final image of a pissed-off James Cagney holding a bottle of Pepsi Cola in his hand and yelling for his lackey (“Schlemmer!”) until I saw it again in later years (I think it was on a local Savannah station—which should give you an idea of how long ago that was; fortunately it later became available on DVD).  I’m still fond of the movie even though many of the jokes haven’t aged well (yes, Billy—we get it…Communists live in a shitty country and have backward customs), mostly because it’s a sheer delight watching Cagney move at his rat-a-tat pace in one of the fastest comedies committed to celluloid.  (I volunteered to commemorate the movie’s birthday at Edward Copeland on Film…and More, which I welcome you to peruse at your leisure.)

Also celebrating an anniversary today—though just a year shy of the five-oh mark—are the blogosphere’s wackiest parents, Ozzie and…er, I mean Nana (Irene to ClassicBecky) and Pop Shreve, or as I refer to them around Rancho Yesteryear, “the ‘rents.”  (Sorry about the poor quality of the photo, by the way—I cropped it from a larger one taken at ShreveFest 2011 this year.)  I never cease to be amazed at how the sitcom that is my folks’ marriage keeps getting renewed season after season, but they must be doing something right because it’s been going on for 49 years now and still does respectable numbers.  We will celebrate this auspicious occasion with a sumptuous dinner prepared by my Mom because she is watching every penny we spend as if she were running for higher office.  (Honestly—I offered to take them out to dinner.)  To the two people in my life whom I love and owe so much I can only say “Happy Anniversary!”

A very happy anniversary to the 'rents!

As for One, Two, Three, I saw it in the theater and laughed loud and long. At the time it was a very funny movie. Haven't seen it since the original release, though, so I have no idea how I'd like it now.

I havent' seen 123 for ages, but I remember that name - Schlemmer!

Congrats to your Mom (Irene to me) and your Dad (Dad to me)! Wonderful milestone -- let's face it, the best marriages are full of fun, fights, gastric delights and a crazy son like you. Hey, are you still the General, or have you scraped off the chin skin?