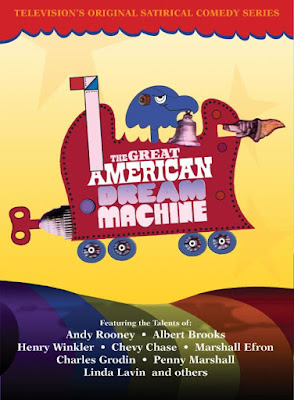 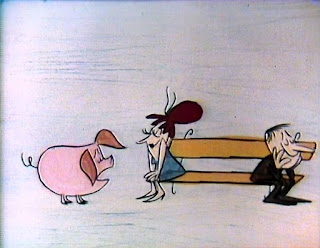 From 1971 to 1972, PBS was home to a freewheeling ninety-minute variety show (later trimmed to an hour) entitled The Great American Dream Machine.  Dream Machine was a hodgepodge of irreverent sketches, mini-documentaries, musical segments and animated shorts that focused on “the American Dream”; it didn’t command a particularly large audience (which is why its time on air was so brief—this is PBS we’re talking about, after all) but it’s fondly remembered by those who did see it in its original run.  Dream Machine also courted its fair share of controversy at the time; its disdain for the war in Vietnam and the Nixon White House (and its empathy for the counterculture) earned it enmity from conservatives, who were able to use the series as an example of the rampant “leftist bias” prevalent in public broadcasting.  (Some things never change, by the way.) 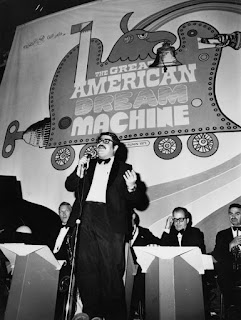 A fire at New York’s WNET (Channel 13)—which originally produced the series—decimated The Great American Dream Machine’s original broadcast prints and master tapes; this goes a lot toward explaining why the show had not been released in any kind of home video format (I don’t think the 40th anniversary special that aired on PBS in October of 2011 was released on DVD).  (By the way….if you blinked, you missed it; I just happened to catch it through a set of some extraordinary circumstances.)  But last Tuesday, a four-disc set of material from the show made its way to online and brick-and-mortar stores (available for the SRP of $39.98); my pal Michael Krause at Foundry Communications was generous enough to shoot me a screener copy.

I realize that promotional hyperbole is a necessary evil in moving product…but I had one small objection to the description emblazoned across the top on the front of the DVD box: “Television’s Original Satirical Comedy Series.”  (I kind of chuckled at this, wondering just where That Was the Week That Was fit into this scheme of things.)  Perhaps I’m relying more on the content inside, but The Great American Dream Machine transcended “comedy series” (many critics referred to it as “an intellectual Laugh-In”); it was more of a television news magazine, much in the mold of NPR’s All Things Considered (which premiered the same year)—I like to call it “60 Minutes after a three-martini lunch.”  There were comedy sketches and presentations, of course, but the program also spotlighted informative interviews with people both famous and non-famous.  Dream Machine could take you on a tour of a Florida retirement community nicknamed “Sun City” (not the place Steven Van Zandt and his pals refused to play), then chat with Sidney Poitier and Harry Belafonte on the set of Buck and the Preacher (1972) before visiting with a former Miss North Carolina to learn about the intricacies of a beauty contest. 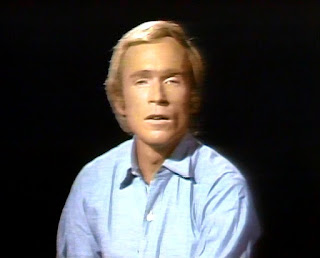 An installment that explores the theme of “death” will give you an idea of The Great American Dream Machine was like.  In the course of an hour, Dream Machine profiles Ted Rosenthal, a poet diagnosed with leukemia, and William H. Brode, a deceased individual still held in reverence by his family—they talk about the tremendous influence he had on their lives.  Dick Cavett reads poetry from Carl Sandburg and e.e. cummings, as well Mark Twain’s humorous thoughts on death etiquette (Amy Vanderbilt also throws in her two cents).  Kurt Vonnegut also contributes literary ruminations on The Big Sleep with a passage from his classic Slaughterhouse-Five.  Gordon Connell declares in spirited song that when he goes, he wants to go to Forest Lawn (Alice Playten and Patti Mariano accompany him with terpsichorean choreography) while Dudley Williams does a more somber interpretative dance to the Robert Shaw Chorale’s rendition of I Wanna Be Ready.  There are clips from memorable death scenes in such movies as The Lady from Shanghai and Broken Blossoms, and Viveca Lindfors and Hurd Hatfield top it off by reading verses from sympathy cards. 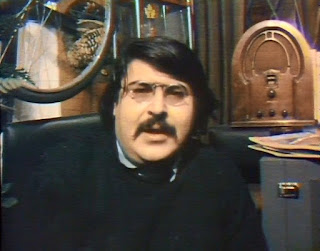 The “death” program also features a humorous monologue at the opening on “famous last words” by comedian Marshall Efron.  Efron was one of the co-creators of The Great American Dream Machine (along with writer Alfa-Betty Olsen and producers Jack Willis and Al Perlmutter), and while in some sources he’s designated as the host, Dream Machine really had no host in the traditional sense.  But Marshall was undeniably the series’ breakout star, spoofing commercialized mass culture by dissecting everything from children’s dolls to tires to olives, and this memorable sketch which is probably my favorite of his contributions (well, this and the “Trash Masher” bit: “The machine that turns 20 pounds of trash…into 20 pounds of trash!”):

I also thought it amusing that one of Efron’s monologues—“Is There Sex After Death?”—is the title of a 1971 feature film that features him and Buck Henry (Marshall plays an adult movie producer).  (In case you’re wondering…the answer is “no.”)

The Great American Dream Machine is often called a precursor to Saturday Night Live—though the only real similarities between the two shows is that both featured short, funny filmed inserts (one of Dream Machine’s best-remembered bits is “Albert Brooks’ Famous School for Comedians,” which is a blueprint for Brooks’ SNL contributions in the show’s first season) and Chevy Chase (also in the first season).  Here’s the extent of Chase’s participation on Dream Machine: 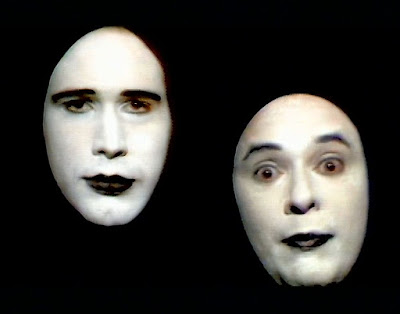 That’s him on the left (and his “Groove Tube” colleague Ken Shapiro on the right) as one of the “Singing Faces,” a Kovacs-esque creation that often introduced the Dream Machine every week with the pair miming to classical music pieces.  The Groove Tube (1974) also borrowed a few bits that had originally been performed on Dream Machine, notably the “Heritage Loaf” commercial (included in this collection) featuring “Kramp Easy Lube” shortening. 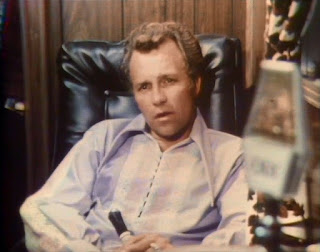 Another recurring segment on The Great American Dream Machine was “Great American Hero,” in which individuals from various walks of life were profiled: from custom car creator Ed “Big Daddy” Roth to roller derby legend Ann Calvello to the incomparable (and recently passed) Blaze Starr (born Fannie Belle Fleming in Wayne County, WV –saaalute!).  These features spotlighted rib-tickling songs composed by future Fernwood 2-Night star Martin Mull (billed as Martin Mull and His Midget Band), and the one he did for daredevil Evel Knievel is pretty hooty: 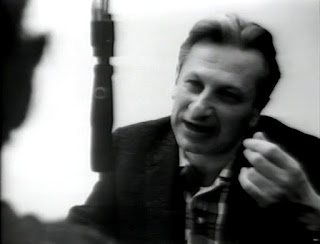 The Great American Dream Machine was a one-of-a-kind television program.  Its legacy lives on not in The Daily Show, as the promotional material suggests, but more like NPR’s This American Life; furthermore, memory is a strange animal, and I was surprised to see from the material on this must-have set that it’s a lot gentler than essays written about the show suggest.  I’d like to see a modern-day revival of Dream Machine (though I realize that the odious phenomenon known as “reality television” would nip that in the bud)—but I don’t know if there are any Andy Rooneys or Studs Terkels still around (Studs was a frequent contributor to the show with a feature entitled “Talking to Terkel”) to make it a worthwhile endeavor.  So it’s best to savor what’s still around for us to enjoy; I thoroughly enjoyed this collection, and would recommend without hesitation a purchase for those who know “nostalgia ain’t what it used to be.”

Oh, I am so getting this. I vaguely remember it from its first run and did see a special collection of bits just a few years ago, probably on one of those niche networks.

I also remember Efron as Bill Nickerson, the president of UBS on 'American 2Night'. (Where we put U before the BS.)

Loved this series...probably my first exposure to its kind of thing (Second City-style sketch comedy, etc.). Odd that they couldn't find a better/less fuzzy tape of it, but the preservation of PBS materials (and NET before them) has been shockingly haphazard.

BTW, one of the reasons they gave up on the original PBS logo is that the face is turned left...and hypersensitive management was worried too many would Read Into That...

I remember Efron's "Illustrated, Simplified and Painless Sunday School" that aired on CBS on Sunday mornings... where he enacted Bible stories in his own eccentric manner.

I loved watching GADM as a young teen; so hard to find info about (or clips from) the show nowadays. I remember being very moved by the mimed version of Biff Rose's "Molly," but never knew that the lady with the angelic voice was K. T. Oslin! Thank you for identifying her.