The following essay is Thrilling Days of Yesteryear’s contribution to the Planes, Trains and Automobiles Blogathon—a Fall 2015 event hosted by the member blogs in the Classic Movie Blog Association.  For a complete list of the participants and the movies/topics discussed, click here. 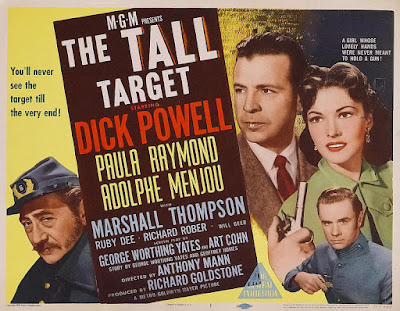 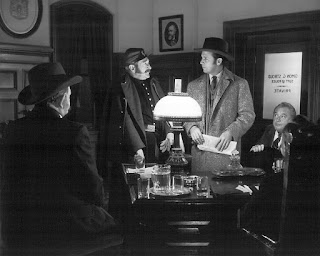 New York City police sergeant John Kennedy (Dick Powell) is a man on a mission: he has obtained information that Abraham Lincoln, who’s just been elected as the sixteenth President of the United States, is to be assassinated during a speech in Baltimore, MD on his way to his Washington, DC inauguration.  Kennedy has contacted both the Secretary of War and the newly elected Lincoln about what he’s learned…but his superior on the police force, Simon Stroud (Tom Powers), dismisses his concerns.  Unable to persuade either Stroud or militia colonel Caleb Jeffers (Adolphe Menjou) of the danger Honest Abe is facing, Kennedy resigns from the police force, determined to go it alone.

Kennedy’s throwing down of his badge in disgust is probably not the smartest move he could have made in this situation.  Since he’s no longer a cop, he technically has little authority in his intention to arrest the conspirator(s) involved in the plot.  Furthermore, a confederate in the form of Tim Riley (Regis Toomey), who was enlisted to secure Kennedy a ticket on the “Midnight Flyer” to Baltimore, has disappeared.  As the Flyer pulls out of the station toward its destination, Kennedy locates Riley…he’s been murdered.  And when Kennedy returns to his seat on the train, it’s now occupied by a stranger (Leif Erickson) who’s co-opted Kennedy’s identity and credentials. 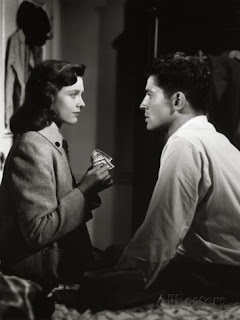 By the 1950s, director Anthony Mann was starting to embark on his successful career in movie westerns; Mann would borrow elements from the series of gritty film noirs he had previously directed to use in these oaters…but he hadn’t completely abandoned noir at this time.  He helmed 1950’s Side Street, a taut little suspenser that featured the stars of They Live by Night (1948)—Farley Granger and Cathy O’Donnell—and a year later rode herd on an interesting vehicle that introduced elements of noir and suspense in a period piece: The Tall Target (1951).  (Mann had performed the same task two years earlier with Reign of Terror [1949—a.k.a. The Black Book], an offbeat entry that features the background of the French Revolution as a film noir.)

The idea for Target was inspired by an incident known as “the Baltimore Plot”—Allan Pinkerton, the founder of the Pinkerton Detective Agency (“We never sleep”) purportedly learned of an attempt on Lincoln’s life as Abe traveled to D.C. for his first inauguration in 1861.  Scholars to this day argue as to the validity of the plot—and even Lincoln felt sheepish about “sneaking” into the Nation’s capital; his line about attending his inauguration “like a thief in the night” is present in Target—but whether or not the details are true, you can’t deny that it makes for a crackerjack movie plot…particularly in light of that whole unpleasantness at Ford’s Theatre four years later.  (The movie’s title, The Tall Target, comes from a line in the film spoken by one of the conspirators: “Mr. Lincoln’s a tall target…there’ll be another day.”)

The story for Target was concocted by George Worthing Yates and Geoffrey Homes; Homes, who also went by “Daniel Mainwaring,” is famous for writing the quintessential film noir Out of the Past (1947). Yates, who would wind up writing Target’s screenplay with Art Cohn, had a movie resume that included the original 1938 serial of The Lone Ranger and vehicles like Sinbad, the Sailor (1947) and This Woman is Dangerous (1952).  (Both men would gravitate to science fiction-themed flicks as the fifties wore on: Homes wrote the screenplay for Invasion of the Body Snatchers [1956] and Yates’ sci-fi contributions include Them! [1954] and Earth vs. the Flying Saucers [1956].)  The two scribes do an admirable job of embellishing on the details of “the Baltimore Plot,” turning the proceedings into a first-rate thriller. 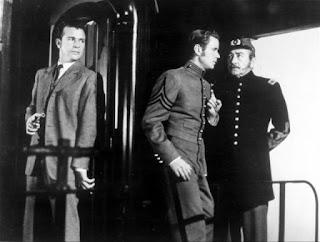 The star of The Tall Target is Dick Powell, an actor whose fortunes in the movies changed overnight when he was cast as Raymond Chandler’s literary sleuth Philip Marlowe in RKO’s Murder. My Sweet (1944).  In the 1930s, Dick was Warner Brothers’ resident chorus boy, appearing in scads of that studio’s sprightly musicals…usually alongside Ruby Keeler.  Powell eventually tired of doing what he called “the same stupid story” (the Warner musicals also lost a lot of their zip once the Production Code went into effect) but a job change to Paramount by the 1940s didn’t satisfy him, either.  With the Marlowe role in Murder, Powell refashioned himself as a tough guy in movies like Cornered (1945) and Johnny O’Clock (1947); the actor even showed off his new image on radio, headlining series like Rogue’s Gallery and Richard Diamond, Private Detective.

By the 1950s, Powell would starting to cut back on his appearances in front of the camera (I blame The Reformer and the Redhead [1950], which he made with wife June Allyson) to tackle assignments behind the device, directing movies like Split Second (1953) and The Enemy Below (1957).  (Powell also embraced that newfangled upstart called television, joining with three of his other Hollywood pals to form Four Star Productions while later hosting the successful Dick Powell’s Zane Grey Theater.)  So I’ve always thought it interesting that the actor explored the parameters of his tough guy persona in 1951; first by starring in this interesting thriller and later appearing in You Never Can Tell, a fantasy comedy in which Dick is the human form of a dog returned from the Great Beyond to solve the mystery of his murder. 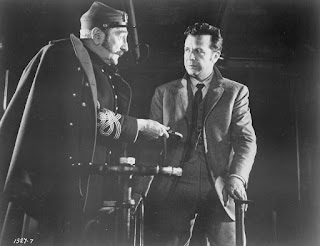 Powell’s role in Target is one of my favorites…and to be honest, I think it’s one of his best.  His John Kennedy (yes, don’t think that hasn’t caused an eye or two to bug out among those who watch the film for the first time) is an intelligent, resourceful cop who’s not above resorting to fisticuffs when his life is threatened.  Modern day moviemakers could learn a lot from Target in that while the protagonist is frequently placed in tight situations they’re never the kind that induce eye-rolling and cries of “Oh, come on!” like any number of Bruce Willis vehicles I won’t sully this blog by naming.  Kennedy is able to extricate himself from peril several times in the film because he manages to stay one step ahead of his adversaries (though admittedly, luck plays a part in one of his escapes—but not of the implausible kind).

Kennedy’s intense interest in protecting the President stems not from politics, but simply a personal one: Kennedy had been appointed as Lincoln’s bodyguard while Abe campaigned in New York, and after only two days of being in Lincoln’s company, Kennedy walked away believing “I was never so taken with a human man.”   One aspect of The Tall Target that fascinates me is that the politics in the film isn’t the usual cut-and-dried “North good, South bad” dichotomy that permeates movies of this type.  There is spirited discussion, pro and con, on the eve of Lincoln’s inauguration and the events that will result in the War Between the States; one of my favorite minor characters in the movie is played by OTR veteran Will Wright, a Hartford, CT building supplies bidnessman named Thomas Ogden who’s no fan of Lincoln because Ogden’s sussed out his company stands to lose a lot of money if there’s a war. 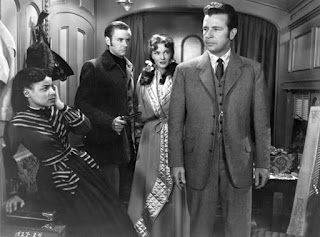 Wright’s character, along with many others, serves as a red herring because as in any good suspense thriller, Kennedy’s adversaries are often difficult to spot.  Throughout Target, individuals believed to be allies will turn on the hero, just as those people who are hostile or indifferent to his plight later come through in the clutch.  At the risk of spoiling any of the events in the movie, the one clear villain is the mysterious stranger (Leif Erickson) who tries to pass himself off as Kennedy by appropriating John’s hat and coat (containing his credentials and other personal effects—like his gun).  The character who gives Kennedy a much-needed assist in his investigation is a slave maid named Rachel, played by the amazing Ruby Dee in one of her earliest film roles.  Rachel is not some uncomfortable Butterfly-McQueen-in-Gone-with-the-Wind stereotype, but a three-dimensional individual who admittedly is torn between helping out Kennedy and her loyalty to the mistress she serves, a Southern belle named Ginny Beaufort (Paula Raymond).  Ginny and Rachel are on their way back to their plantation, “Tall Trees,” with Ginny’s brother Lance (Marshall Thompson)—a West Point grad—in tow.

Moviemakers learned early on (beginning with 1903’s The Great Train Robbery) that setting dramatic conflicts against the background of a moving train was a surefire way to generate suspense and excitement.  In Target, there are many nods to one of the granddaddies (or is it grandmammas?) of the genre, The Lady Vanishes (1938), in that the events in the beginning of Target resemble the missing-person plot of Lady (just where did Riley get to?) and later in Target, a vital clue in the assassination plot is scrawled in the soot residue that’s collected on a train window.  Target also acts as a warm-up for The Narrow Margin, released the following year; the claustrophobic atmosphere of Target (thanks to the striking black-and-white cinematography of Paul C. Vogel) is quite reminiscent of that memorable Chicago-to-L.A. train excursion featuring TDOY faves Charles McGraw and Marie Windsor.

Save for a snatch of The Battle Hymn of the Republic at the closing credits of The Tall Target, there is no music score in the film—something I’m sure was rather innovative at the time, as the soundtrack features nothing but the sounds of the train and the various bells and whistles that accompany such locomotives.  Target does, however, feature a plethora of beloved character actors that’s become a hallmark of this blog: Florence Bates and Katherine Warren are quite good in their roles, and Will Geer and Victor Kilian provide comic relief as the train conductor and engineer, respectively—they’re not all that concerned about rumors of assassination, they just want to make sure the train runs on time.  That’s future Leave it to Beaver mom Barbara Billingsley as the mother of the little brat who makes himself a nuisance on the train, and you’ll also spot the likes of Robert Easton, Jonathan Hale, Frank Sully, and Emmett Lynn.  (I like how the indestructible Regis Toomey continues the tradition of appearing in his pal Powell’s movies, by the way—in this one, he plays the doomed Riley.)  One actor who’s difficult to spot (he appears in the early scene where Powell’s Kennedy is making his case to investigate the assassination rumors) is Ken Christy—but that unmistakable voice gives him away every time.  And yes, Honest Abe even makes an appearance…in the form of actor Leslie Kimmell.
Posted by Ivan G Shreve Jr at 11:30 AM

Trains, murder and more trains. Who could ask for anything more? "The Tall Target" is as dandy a thriller to ever come out of Hollywood. I simply cannot imagine anyone not enjoying this film, especially after your take on the proceedings.

Such a great movie, and I agree, one of Powell's best roles.

This sounds like an essential film. Must track it down after reading your thoughtful review. I know I'll like it – what's not to love about Dick Powell?

Oooh - this sounds like it is right up my alley. I need to try and see this soon! Sounds like a real good time. Excellent post and choice for the event!

This sounds like a fun film! I'm always fascinated by Dick Powell's career trajectory. Who would have thought that the singing underdog of all those musicals would become such a great noir hero? Thanks for a great review--I need to watch this movie!