If you were curious as to why Brother Schweier seemed to have taken over the blog the past few days (not that this is necessarily a bad thing; his incisive reviews are always welcome) it’s because I took a short sabbatical while my sister Debbie and her family (husband Craige, daughter Rachel) graced us with their presence this week.  They have since made tracks toward their home base in the hinterlands, but not before stopping off in to watch Craige’s alma mater, , play in the Auto Zone© Liberty Bowl this afternoon (sister Debbie got them tickets as a Christmas gift).  After their stayover in The River City, it’s back to I-O-Way because my bro-in-law will be participating in the caucus come January 3rd. 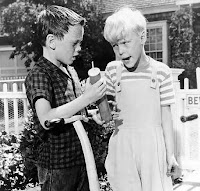 Both Deb & Craige and niece Rachel bestowed upon me some Amazon.com gift certificates for presentry this year…which have already been spent on two DVD collections that I have had my eye on for some time now, Season 5 of Alfred Hitchcock Presents and the fourth and final season of Dennis the Menace (I told ClassicBecky she’s welcome to my Dennis “rootpeg” set, and I wish I could say her reaction was one of boundless enthusiasm but that would be a lie).  As for the ‘rents, Deb & Craige splurged on a wireless router to allow their laptop internet access, so it will only be a matter of time before both Mater and Pater are zooming down the superinformation highway…and if past trips with my Dad are any indication, he’ll be pulling into some gas station any minute now to ask directions.  But on the off-chance that they do start surfing and stumble across this ‘umble scrap of the blogosphere…well, I’ll probably have to cut back on the profanity…and it wouldn’t hurt to tidy up some, too.
But the big bodacious gift we received here in the House of Yesteryear came from sister Kat and sister-in-law Katie (with financial kicking-in from Deb & Craige, too).  It’s a…wait for it… 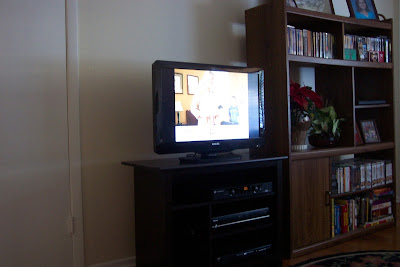 Viola!  A brand-spanking-new 32” Philips HDTV, which I have to say none of us was expecting.  Craige set this bad boy up last night (a necessary detour had to be made to our local Best Buy, however, because we didn’t have any shelving to sit it down upon) and my mom thinks its supercalifragilisticexpialidocious; it’s the first time she’s been able to read the score of a basketball game in years.  (My father has given it the thumbs-up as well—though there was a brief moment yesterday when I thought we’d have to break out the defib paddles because he was going through withdrawal being denied access to TV while the hookup was underway.)  Not only has Castle Yesteryear been outfitted with HDTV television and wireless internet capabilities, but Craige managed to fix the house thermostat so it comes on more than three times in the evenings.  All in all, it was a true Christmas miracle—the only downside is I’m having trouble sleeping at night because my bedroom is so warm.
This will be the last post here at Thrilling Days of Yesteryear for 2011, so I want to wish all the TDOY faithful the happiest of New Year’s and best wishes for a better and prosperous 2012.  We’ve got a real feed planned this evening (my Mom is whipping up her world famous hot wings) and will then probably watch a Bait Car marathon…in HDTV, even.
Posted by Ivan G Shreve Jr at 1:00 PM

And a Happy New Yesteryear with a zillion box sets and no split seasons to you and yours!

Congrats on your new HDTV and Happy New Year, Ivan!

Beautiful TV, wonderful gift! Mine has some life left to it, but I may hope for such a gift as well within the year! Ivan, did I hurt your feelings by scorning your Dennis the Menace offer? I could send you some tissues to catch the tears -- actually, scorn is a little heavy -- I simply thought some more deserving person might like it (cough, cough). I'm up at 7:34 a.m. New Year's Day because the *#*($* fire alarm went off again and woke me up! Oh well, it's as good a time as any to wish you a great year to come and all the best in the world.