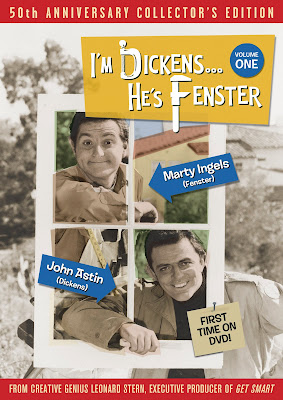 The above is the only thing I asked anybody for this Christmas—the first volume of I’m Dickens…He’s Fenster, the classic (and sadly, short-lived) sitcom starring John Astin and Marty Ingels telecast on ABC from 1962 to 1963.  Even though it’s going to be officially released next April (at Amazon, etc.) I requested this as a gift because those individuals who purchased it early will be acknowledged as “architects” when the second volume of the show is put out later next year.  (Yes, I am starved for publicity.  I would appreciate it if you would transform those piteous looks into something resembling respect.)  Also, by getting in the ground floor on this, I received a free autographed postcard from…wait for it… 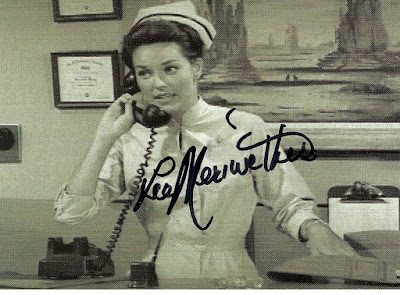 That’s right, friends and neighbors!  Lee “Catwoman” Meriwether!  You are a little bit more impressed…perhaps a little envious, no?  No?  Not even a little...um…okay.
Other DVD goodies received by yours truly include these two sets… 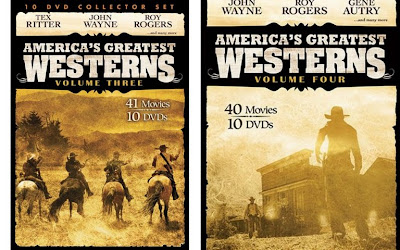 …released by Platinum Disc Collection, they contain a total of eighty-some B-westerns, something I am a sucker for—and the nice thing about receiving these was there was duplication of content in only three instances: I taped one of the movies (The Carson City Kid, with Roy Rogers) off of Encore Westerns sometime back and two of the Three Mequiteers features (Hit the Saddle, Riders of the Whistling Skull) were previously made available to me courtesy of my pal Rodney Bowcock.  The America’s Greatest Westerns (yeah, a bit of a misnomer) volumes were bestowed upon me by my dear ol’ Dad (probably because I always seemed to be watching one whenever he’d come by the old apartment) and even though the prints contained within are not pristine (I watched a Cisco Kid feature, The Gay Amigo, last night and it’s a little…no, it’s a lot blurry) I know I’m going to have a lot of fun watching these.  (Platinum has sort of compounded its public domain crime by sticking their logo randomly throughout the running time of these films as if to say “Don’t even think about trying to copy our free movies!”)

Also on the western front—my BBFF Stacia gifted me with Gunsmoke: The Fifth Season, Volume 2.  This means that if there is a Great Beyond she will be feted like royalty, invited to high tea with folks like Bette Davis and Marie Prevost and getting access to all the classic movies and cheesy horror flicks she can handle.  Thanks again for the present, kiddo. 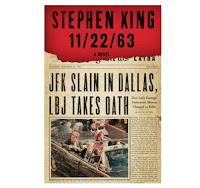 Finally, Mom used one of her valuable Barnes & (Ig)Noble coupons to get me 11/22/63, the new fiction novel by horrormeister Stephen King (I had casually mentioned an interest in reading the book due to its subject matter even though I couldn’t tell you the last time I read one of King’s novels); she also got my father (down goes another coupon) the book that Hardball host Chris Matthews has been shilling like a madman on his program and any other venue that will have him, Jack Kennedy: Elusive Hero,  Now, because my mother and I have nothing else to do with our evenings but wait patiently in the living room until the heat kicks on, we are also held hostage by Chris Matthews, whose Hardball program is watched religiously by Dad and who has been plugging this book (you can’t even begin to imagine my schadenfreude when I read over at Amazon.com that the book has a few factual errors) above and beyond the call of your normal self-promotion.  Matthews will cut a segment short with his guests (usually when the discussion is starting to develop fatal traces of being interesting) just so he’ll have time to do his “Let Me Finish” segment at the end of the show (if there has ever been a time when someone has not let Chris Matthews finish something, send me that info because that person will be my new best friend) where, admittedly, you have to admire the ingenuity he employs to mention that goddamn book at every turn.  His television chyron should read “Completely devoid of shame”; he even got his wife to plug the book in a cutesy instance last week where she “interviewed” him on the show.

Okay, that was a long-winded wind-up to this: my father asks me what King’s is about, and I explain to him that the protagonist in the novel journeys back in time to try and prevent the Kennedy assassination.  He pauses for a second, and then says: “If only that were so.  Then I wouldn’t have this book (Matthews’) in my hands.”  (He’s a panic sometimes.)
I also got some mailing envelopes (don’t ask) and a pair of slippers from my Mom.  All in all, it was a splendid Christmas.  And now…Christmas card roundup!
From Stacia: 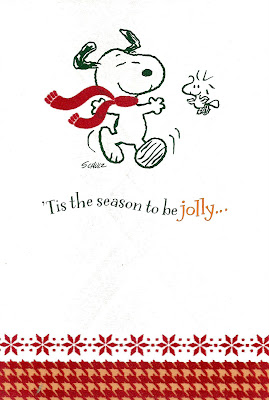 From faithful TDOY reader Dan O. (don’t everyone “awwww” at once): 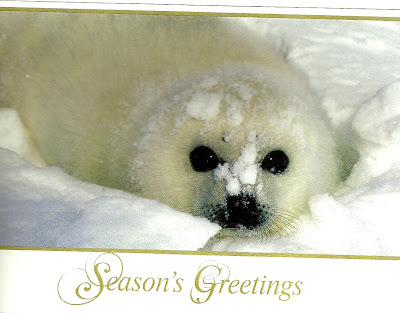 From Laura of Miscellaneous Musings fame (love this card!): 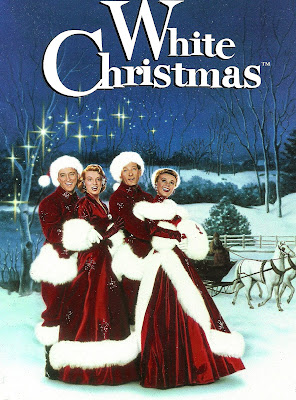 From sister Debbie (I love how the dog gets included—Debbie is just inches away from including one of those yearly “newsletters” that some families write…):

And finally—not a Christmas card per se but a picture of my nephew Davis showing off the fact that he’s one of Santa’s close, personal friends (game on, Best Buy): 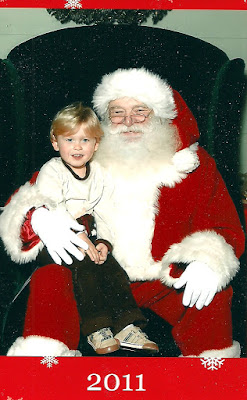 I hope everyone out there in YesteryearLand had as wonderful a Christmas as I did.
Posted by Ivan G Shreve Jr at 10:30 AM

So glad you enjoyed it! Glad you had a merry Christmas, and best wishes for the New Year!

Aw, you scanned the card! I'm glad you liked it and the DVDs. Somewhere in the USPS ether, someone in a Tulip Festival t-shirt is watching the first set of DVDs I sent.

Glad you got some serious swag this Christmas, and I am honestly impressed by the Lee Meriwether autograph.

I remember a Superboy comic book story when he tried to prevent Lincoln's assasination only to be twarted by Luthor.