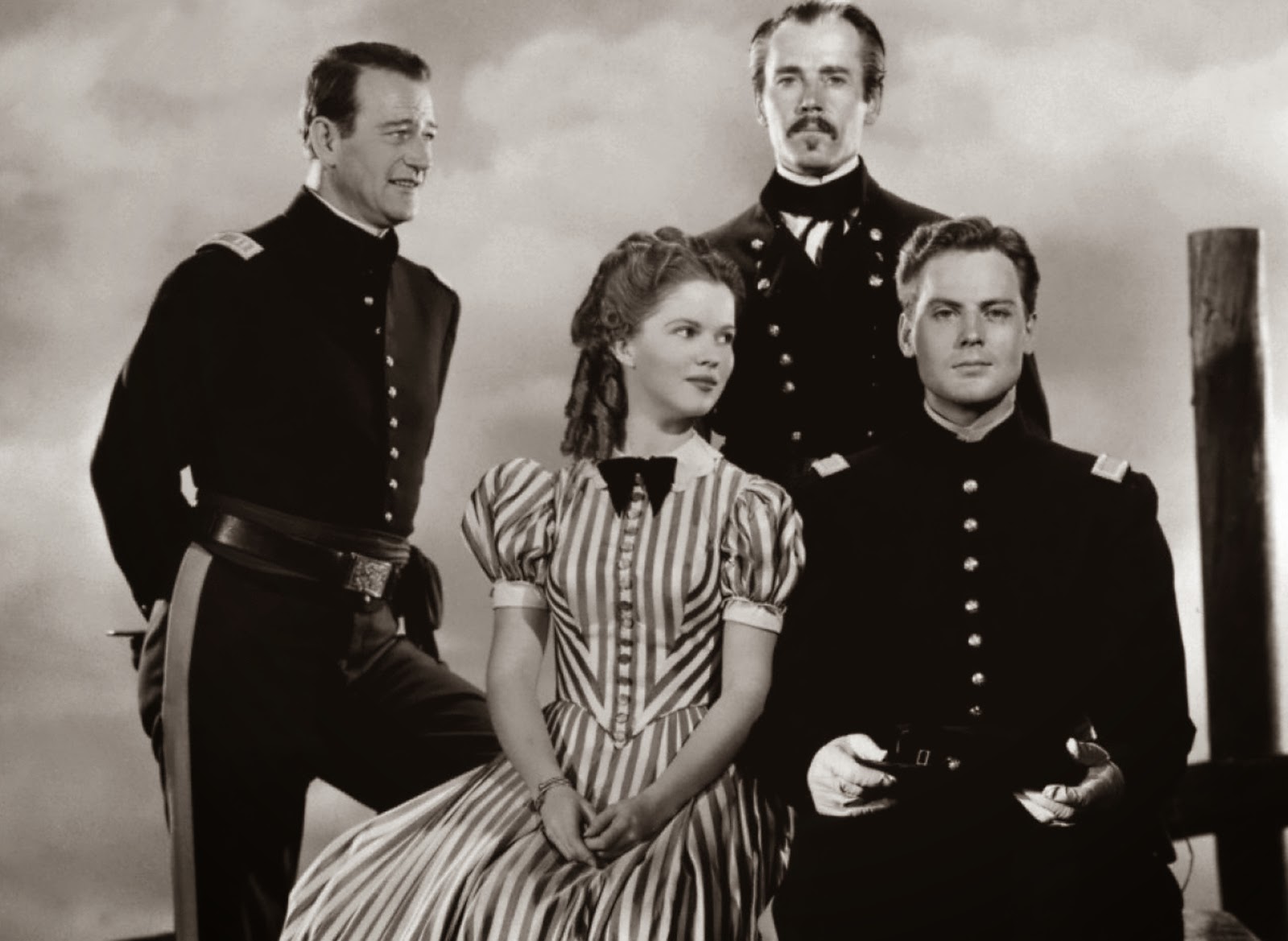 With the recent passing of classic film icon Shirley Temple, I got to thinking about any of her films I may have seen, but only one came to mind: Fort Apache (1948), in which she co-starred with Henry Fonda and John Wayne under the direction of John Ford.

It was the first entry into what has been referred to as John Ford’s “Cavalry Trilogy,” all centering on the same theme of the army out West. Though I’d come across passing mentions of the trilogy, I’ve never taken the opportunity to sit and examine the three films together. 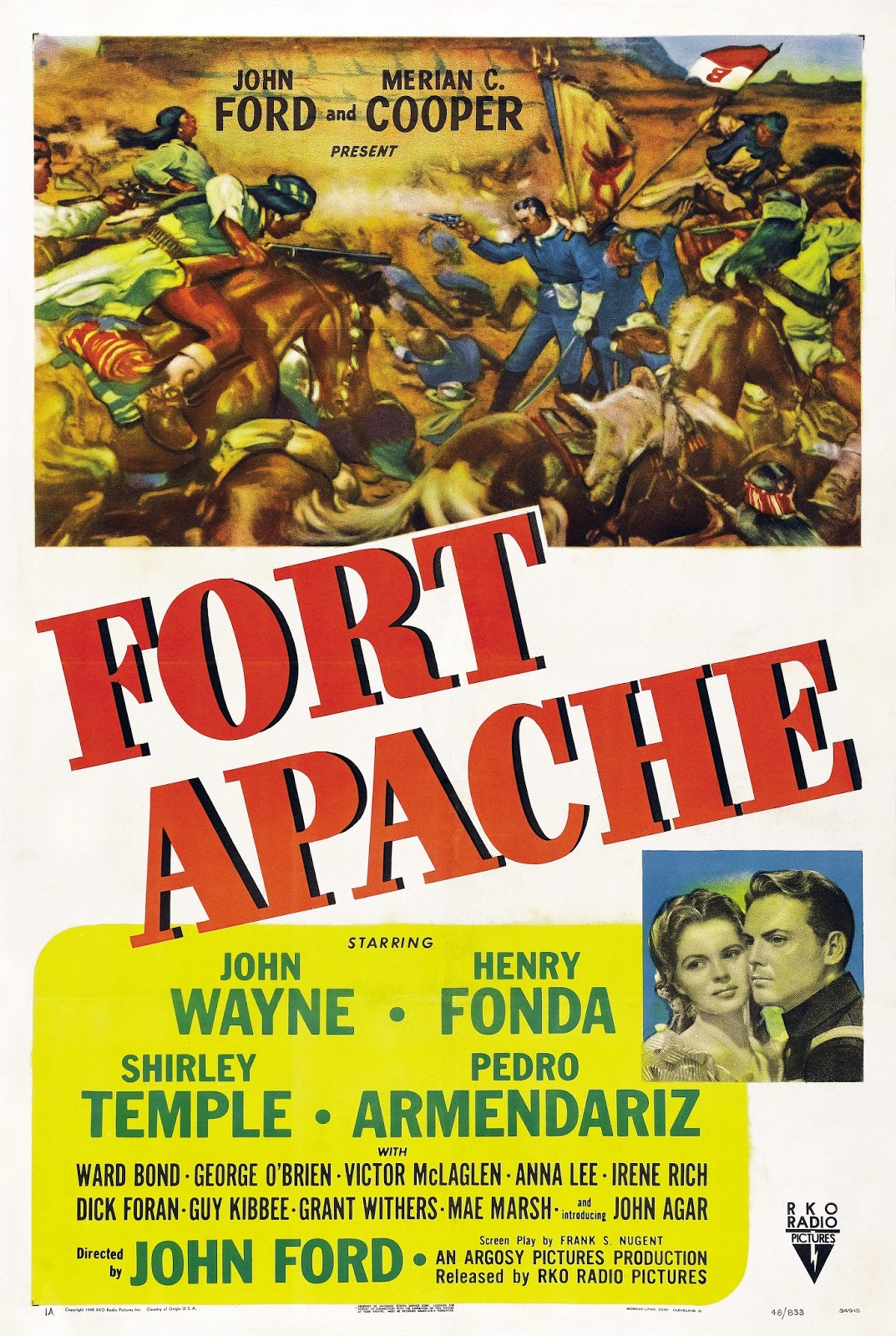 Loosely based on Custer’s infamous “Last Stand,” Henry Fonda plays Lt. Col. Owen Thursday, a career officer now posted to Fort Apache, an assignment he obviously sees as woefully beneath him. But like a good soldier, he follows orders. Joining him in the transfer is his teenage daughter Philadelphia (Shirley Temple), fresh from a finishing school in Europe. She doesn’t mind the assignment to way out West; she’s just happy to be with her father.

At the stagecoach’s last stop, 35 miles from the fort, they encounter a young Lt. Michael O’Rourke (John Agar in his film debut; he and Temple were married at the time). Soon afterward, a handful of soldiers arrive to pick him up. It’s clear from the greeting that they are old family friends, played by Pedro Armendariz, Victor McLaglen and Jack Pennick. Thursday is dismayed that they haven’t been sent for him. 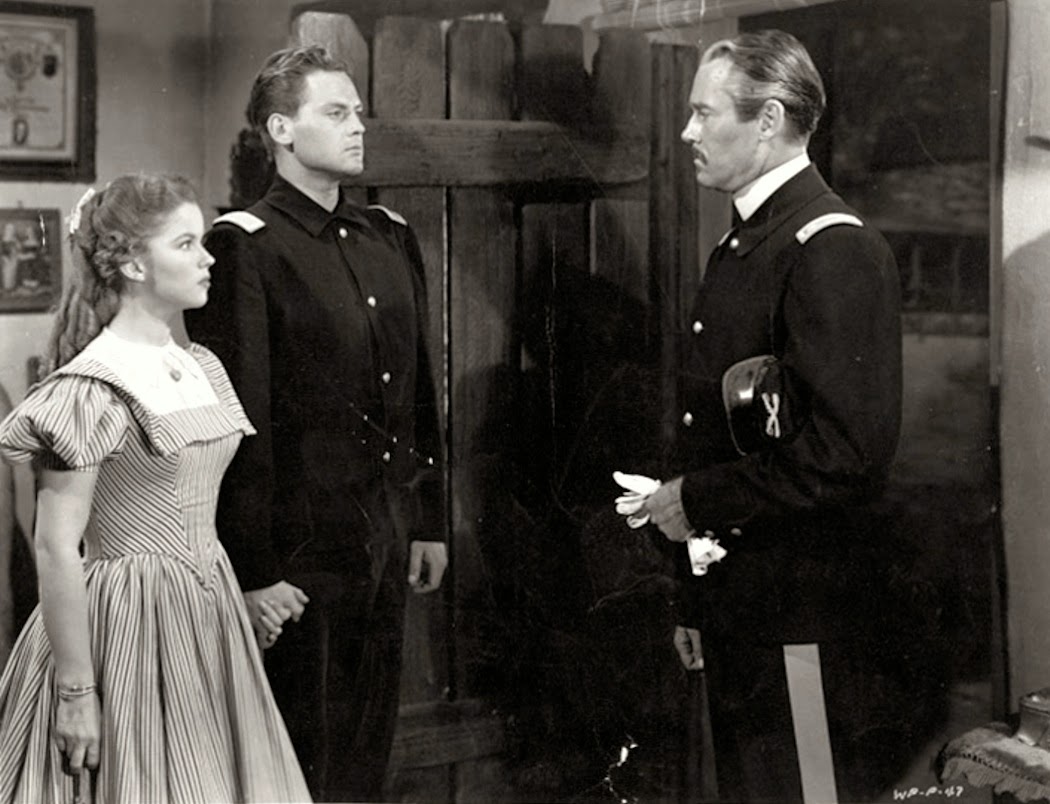 Arriving at the fort, Thursday is further disappointed that the party being held is not for him, but instead in honor of Washington’s Birthday. So he is informed by Capt. Kirby York. Meanwhile, young Lt. O’Rourke, fresh from West Point, is reunited with his father, Sgt. O’Rourke, played by Ward Bond in what is perhaps the most sedate family reunion ever captured on film.

I chalk it up to the overall “Irishness” of the film. Being a descendant of the Old Sod meself, I have the greatest respect for their contributions to the growth of these United States. And I’m well aware of director John Ford’s fondness for his heritage, but watching this film, one might come to believe the West was tamed largely by Sons of Erin, while others, like Lt. Col. Owen Thursday, fell victim to a combination of their own egos and Indian arrows.

Lt. O’Rourke and Philadelphia soon strike up a budding romance, until an early morning ride amidst concerns over Indian attacks requires the colonel put an end to it. At best, he tolerates the young lieutenant, mainly because he’s the only one to adhere to military decorum despite their remote posting. Most of his other officers and NCOs are much more relaxed. 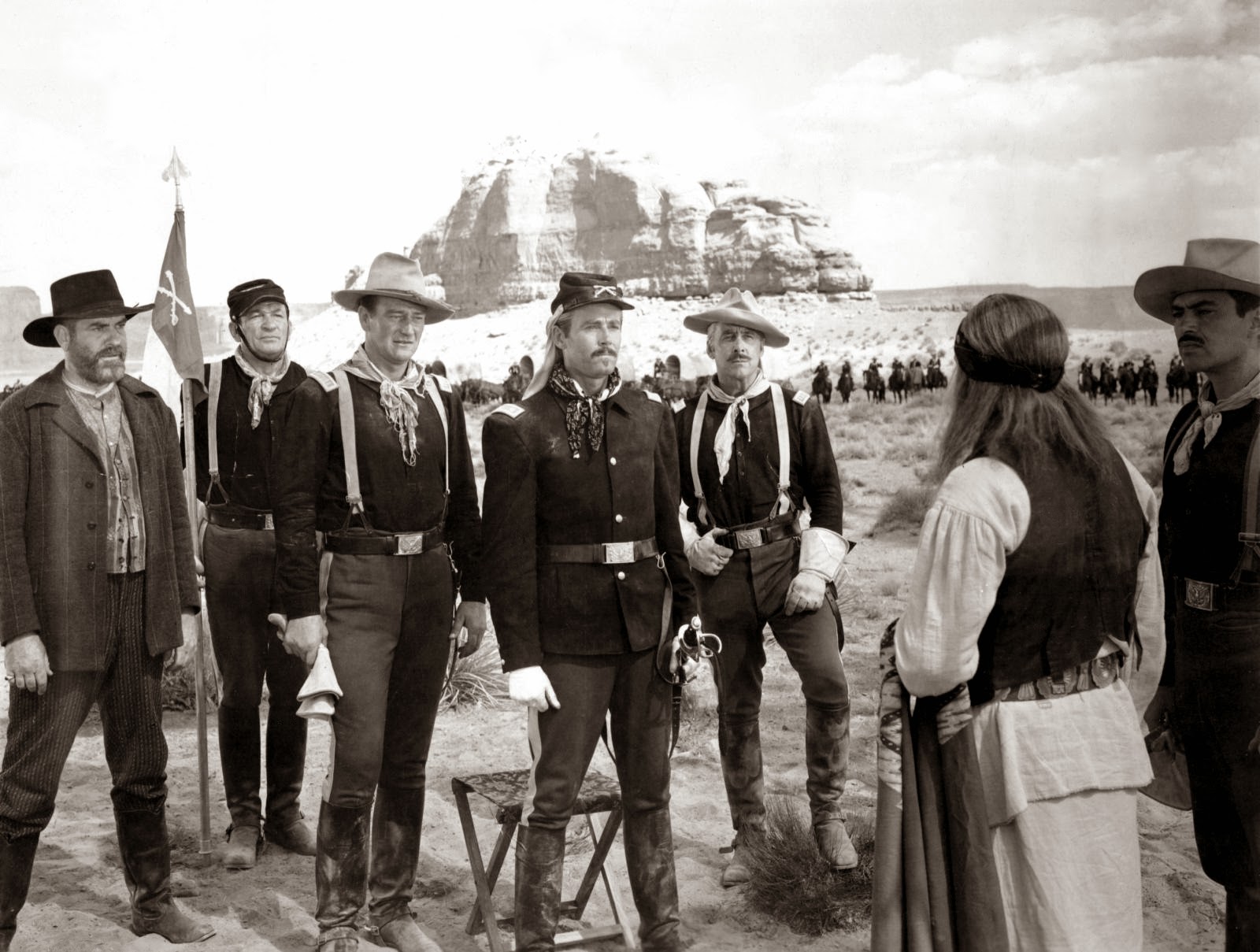 When news arrives of Cochise being on the warpath, Capt. York (Wayne) and Sgt. Beaufort (Armendariz) are dispatched to seek him out in the hopes of convincing him to return peacefully to the reservation. They manage to do so, and learn the source of Cochise’s grievance is a corrupt Indian agent named Meacham (Grant Withers). Cochise and his band seem willing to discuss terms, which include Meacham’s removal.

However, Col. Thursday has other plans. With Cochise’s guard down, Thursday is all too willing take advantage of the opening to run the Indian’s to ground. York urges him not to, and is ordered to hang back with his men while the colonel and his loyal – soon to be dead – officers engage the enemy. The volume of Indians that overrun Thursday and his command is insurmountable, and York is forced to observe the massacre as it happens.

The film’s coda takes place a few years later, as reporters interview the now-Lt. Col. Kirby York regarding his heroic commander. As with a later John Wayne film, he is content to let them print the legend. Philadelphia is now married to Captain O’Rourke, though at this point in the film, Shirley Temple’s appearance seems superfluous. Her character had lost its purpose once the focus shifted to the battle between the Indians and the cavalry. 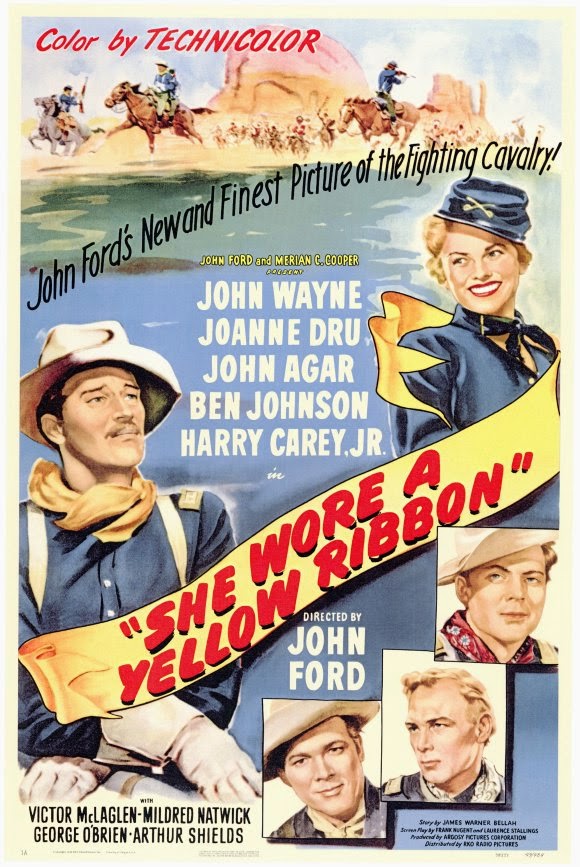 She Wore a Yellow Ribbon (1949) takes its title from the tradition of women wearing yellow ribbons in their hair to signifying their beaus being in the cavalry, as indicated in song throughout the film. The female lead, Joanne Dru, does so, but it regularly remains a question as to whom the yellow ribbon is for.

The story begins with the news of Custer’s Last Stand, or by loose association, that of Col. Thursday in Fort Apache. Everyone is anticipating a renewed Indian war, and at Fort Stark, Capt. Nathan Brittles (John Wayne) is less than a week from retirement when he is ordered out on patrol.

Sent along with him are the wife and daughter (Mildred Natwick and Joanne Dru) of the fort’s commander. Brittles assignment is to see them safely to the stagecoach station for passage east and out of harm’s way. Complicating matters are two squabbling lieutenants, Cohill and Pennell (John Agar and Harry Carey Jr.), both interested in the major’s daughter. 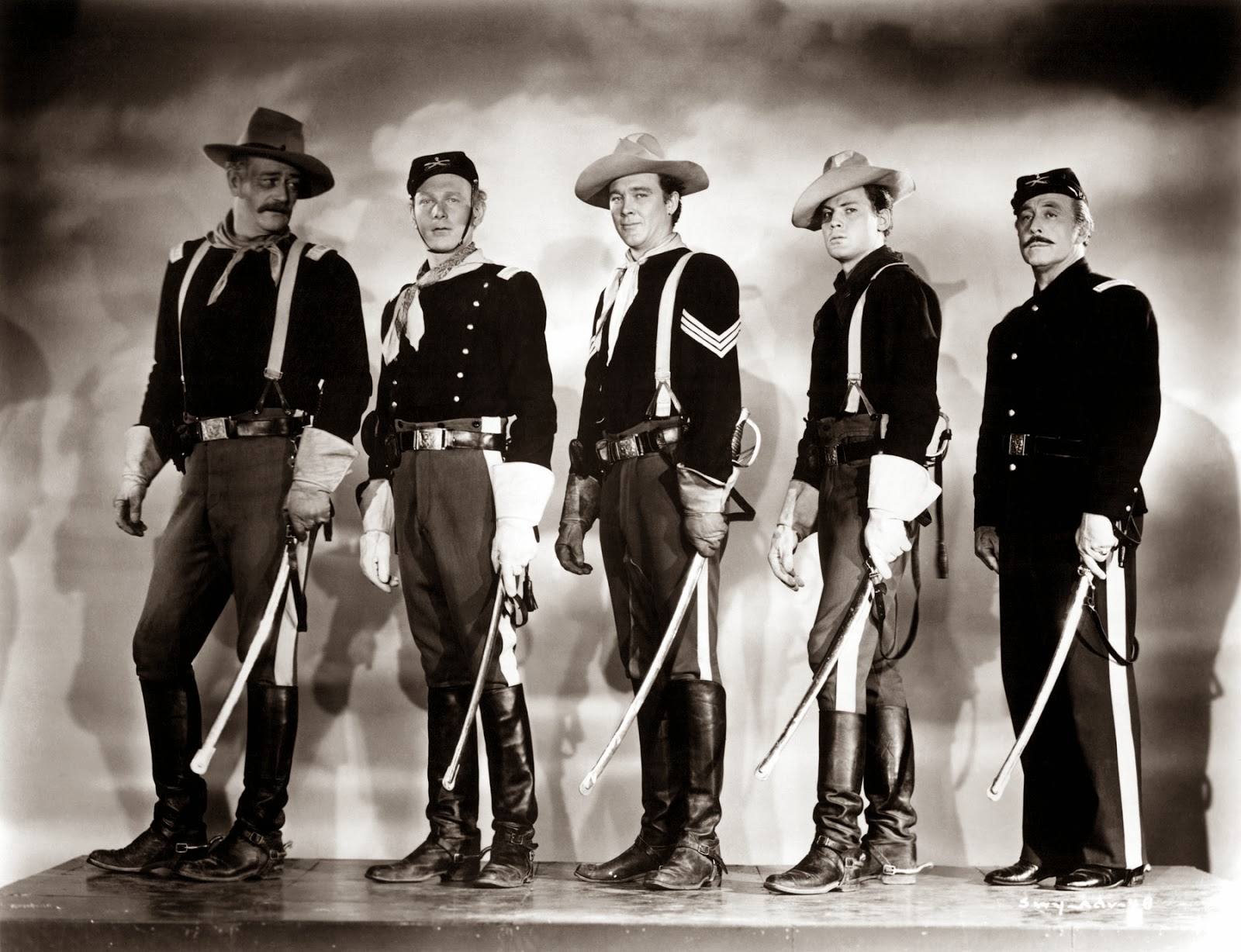 Ben Johnson plays Tyree, an army scout who warns the troops of the movements of the collecting Indian nations. Tyree also keeps Brittles apprised of the actions of Rynders, an Indian agent who is providing guns and ammunition to the Indians.

Brittles’ mission, which comprises much of the center of the film, ends in failure. He is forced to leave a small company under the command of Lt. Cohill behind to cover the retreat of the rest of the expedition. Returning to the fort, Brittles has one day left before his retirement. Unable to allow his final mission to end badly, he rejoins Pennell on his way to collect Cohill.

The three men lead the cavalry to rout the Indian forces in typical John Wayne fashion. Joining Wayne in the production is Victor MacLaglen as his sergeant, Quincannon. While both MacLaglen and Johnson will play characters with the same names in the follow-up, Rio Grande, it should be noted that they may or may not the same characters. I found it helpful for my own sense of continuity to watch the three films out of order, but your mileage may vary. 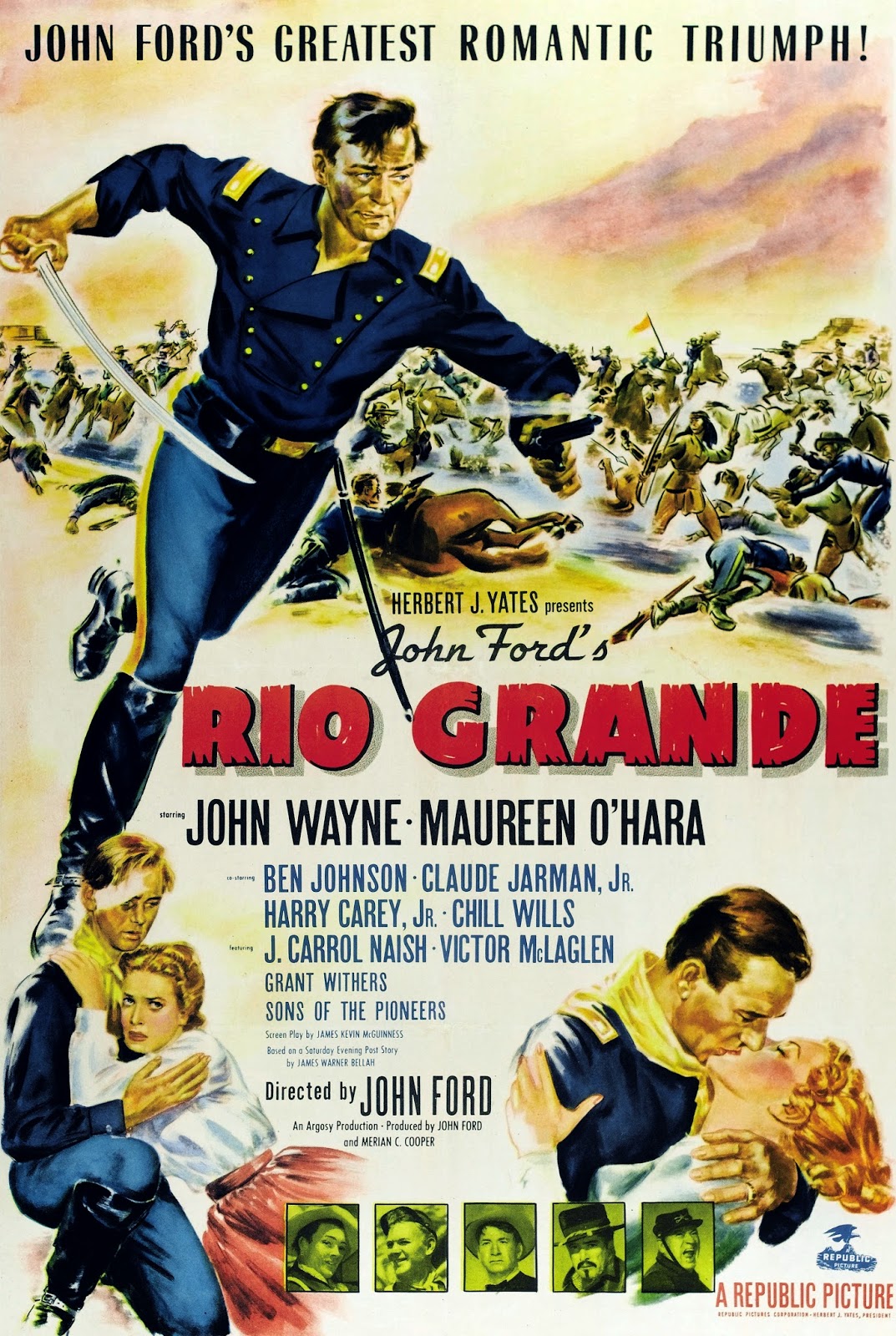 Rio Grande (1950) is more of a direct sequel to Fort Apache, focusing on Wayne’s character, Lt. Col. Kirby Yorke. He is now posted to the Texas frontier, frustrated by constant skirmishes with Apaches who are quick to flee across the Rio Grande beyond his reach.

Further complicating Yorke’s command is the arrival of his son Jefferson (Claude Jarman Jr.). Having just flunked out of West Point, the young man has enlisted, and by chance has been posted under his father’s command. Neither has laid eyes on the other for 15 years, and both are determined not to allow their family relation to influence their roles as soldiers. Trooper Yorke is befriended by two other recruits, Tyree (Ben Johnson) and Boone (Harry Carey Jr.).

As if this isn’t trouble enough, the estranged Mrs. Yorke arrives (Maureen O’Hara), determined to buy her son’s discharge and return with him to Virginia. Her reunion with her son has overtones of “Let me kiss it and make it better,” but to his credit, he is committed to his service.

Meanwhile, Tyree is accused of manslaughter, stemming from an incident involving an insult to his sister. He manages to escape the stockade, stealing the colonel’s horse in the process. 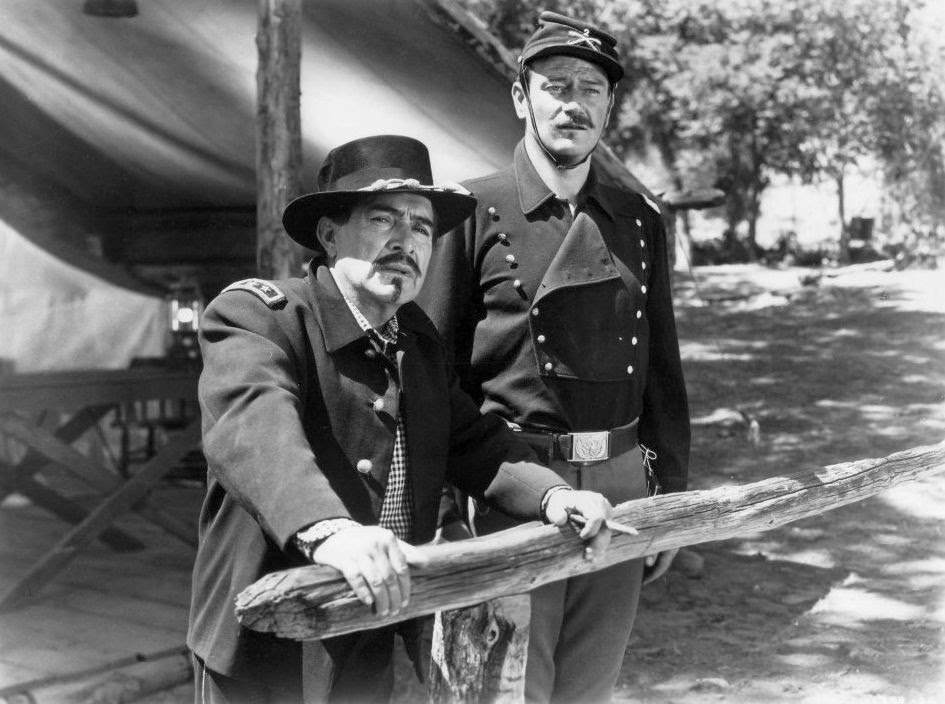 As Col. and Mrs. Yorke begin to renew their marriage while at the same time sparring over their son’s future, the colonel is handed a tough assignment. Gen. Sheridan (J. Carrol Naish) tasks him with crossing the Rio Grande – effectively invading Mexico – in pursuit of the Apaches, to run them down once and for all.

Tyree comes upon Col. Yorke’s troops as they head into Mexico. But the Apaches they’re in search of have captured a wagonload of children headed to the safety of Fort Bliss. Tyree has already reconnoitered the Indians’ camp, where the children are being held in an old church. He convinces Col. York a small group of men will have a better chance of rescuing them than a full-scale assault. He asks for two volunteers: troopers Boone and Yorke.

At the church, they manage to free the children, where one loud-mouth, Margaret Mary (Karolyn Grimes, best remembered as Zuzu in It’s a Wonderful Life) signals for Col. Yorke’s attack by ringing the church bell (“Get me. I’m giving out wings!”). Col Yorke is wounded in the battle, and following his recovery he witnesses the award ceremony as his son receives a commendation for his service. 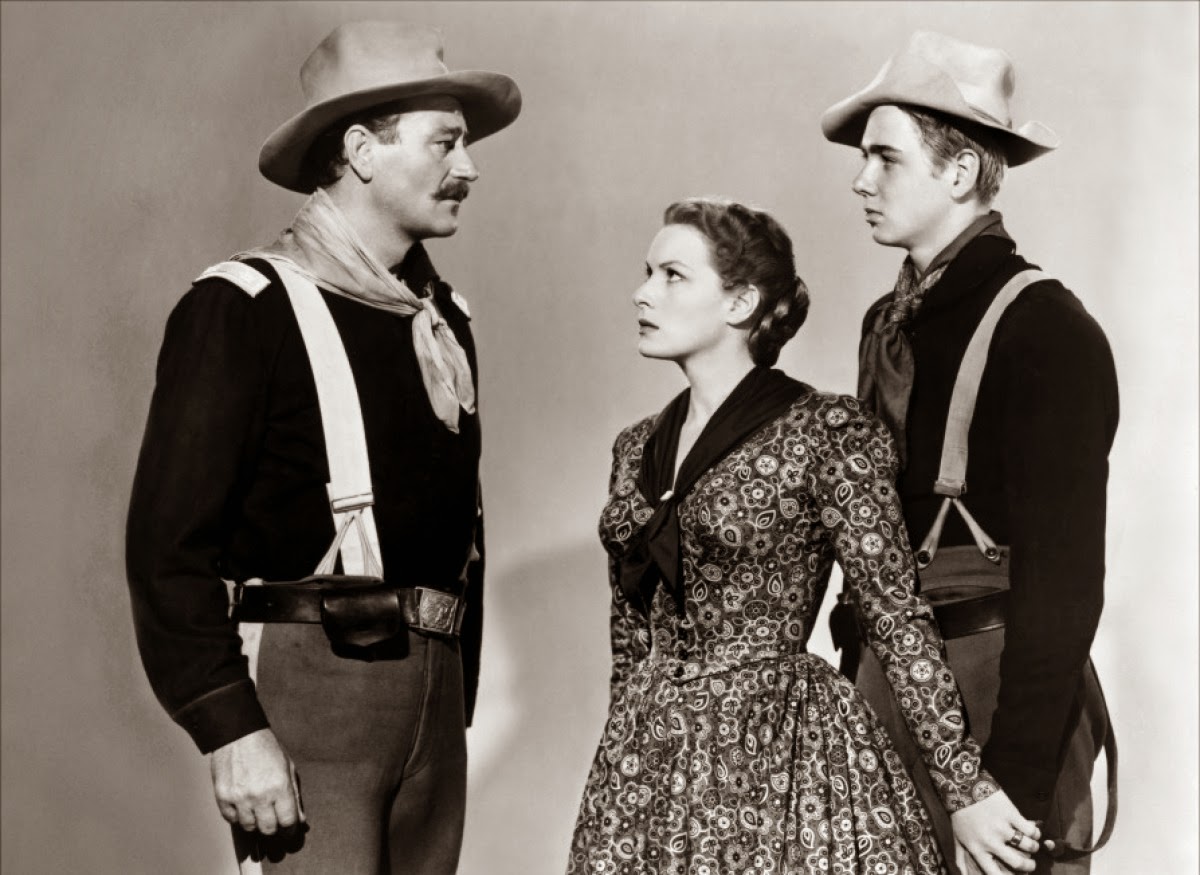 This was the first of five films featuring the on-screen couple of Wayne and O’Hara. Their next project was The Quiet Man (1952), also directed by Ford. Legend has it that Republic convinced Ford to make Rio Grande to make up the money it expected to lose producing The Quiet Man, only for the latter film to become a box office hit.

Modern audiences might find the three films uneven, due to the fact they don’t form one cohesive story. But it should be remembered they were never intended as such.  All three portions of the Cavalry Trilogy were based on stories by James Warner Bellah, who would later write the screenplay for the previously-referenced The Man Who Shot Liberty Valance (1962). The characters he crafted were often tough, heroic but often flawed; well-suited for John Wayne to flesh out on screen, especially under the master direction of John Ford.
Posted by Ivan G Shreve Jr at 8:00 AM

Philadelphia is now married to Captain O’Rourke, though at this point in the film, Shirley Temple’s appearance seems superfluous. Her character had lost its purpose once the focus shifted to the battle between the Indians and the cavalry.


Why is that surprising? Temple was in "FORT APACHE" to serve as a romantic female lead. Joanne Dru served the same purpose in "SHE WORE A YELLOW RIBBON" and Maureen O'Hara in "RIO GRANDE".

Hi,Its been several years since you posted this.My husband is John Wayne fan. We watched Horse Soldiers 5 months ago for 1st time. Since then, Wow I have recorded any John Ford movie on. And many Great movies , Newly discovered by us, Love Them.

I like the cavalry trio. O’Rourke is still a lieutenant at the end of the movie, not a captain. As the first comment mention, Shirley Temple was the romantic interest in the movie. She also illustrated, along with Sargeant Mrs. O’Rourke and Mrs. Collingwood, the stoicism of cavalry wives; it was not an easy life. Lt. Col. Thursby was a perfect example of the arrogant and ignorant cavalry officers who thought nothing of leading their men into death to reap the glory.

She wasn't his daughter, she was his niece in Yellow Ribbon. Tyree stole Gen. Sheridan's horse, not Col. Yorke's horse...