“I ought to fall on you like the sword of God…” 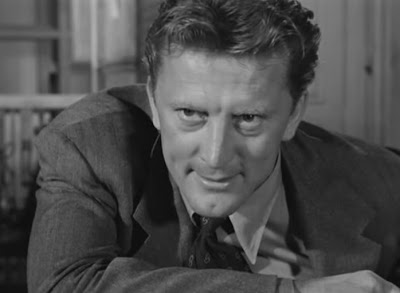 Sixty years ago today, the film Detective Story was released to theaters—a movie adaptation of Sidney Kingsley’s 1949 Broadway stage hit about a dedicated police detective…who’s a little too dedicated, to the point of harboring a world view in which matters are dealt with in purely black or white terms.  It’s another great acting showcase for its star, Kirk Douglas…who had earlier that same year set the bar high for cinematic rat bastards with Ace in the Hole—but I think he actually outshines the skuzzy reporter in that movie with his supercop Jim McLeod, who has a serious stick up in his ass when it comes to law and order, and both a discredited doctor (who’s supposed to be unsympathetic…and they got the right actor for the job, George Macready) and a troubled young embezzler (Craig Hill) beat the brunt of McLeod’s high-horse approach.

You can read a little bit more about the movie at Edward Copeland on Film…and More; I revisited it this past week in order to write the essay and was a little disappointed that it didn’t hold up as well as I remembered.  (I know you’re going to be positively gobsmacked by this revelation—but it’s been over twenty years since I first saw the movie on TBS back in the 1980s and paid it a courtesy call thanks to the 2005 DVD release…which has been sitting unopened on one of my shelves all this time.  What do you mean, you’re not surprised?  Why, I oughta…)  The movie remains a must-see in any filmgoers’ education, however, for the first-rate performances: it’s the movie I always think of when I think of what William Bendix could do when he wasn’t muttering about revoltin’ developments; it’s a dress rehearsal for Horace McMahon’s signature role on TV’s Naked City; and it’s the feature film debut for Lee Grant (who is positively mesmerizing as an anonymous shoplifter), who after winning Best Actress honors at the Cannes Film Festival and scoring a Best Supporting Actress Oscar nom had to ply her trade on TV on shows like Search for Tomorrow because of the motion picture industry’s blacklist (Cornel Wilde was brave enough to cast her in the 1955 film Storm Fear, so good on him).  Both McMahon and Grant came over from the original stage production, and were joined by James Maloney (who plays the boss of Hill’s embezzler) and Michael Strong & Joseph Wiseman as a pair of luckless second-story men.  I highly recommend a purchase of the Story DVD since it doesn’t look like it’s going to turn up on TCM anytime soon (it was conspicuously absent from Kirk Douglas’ Star of the Month tribute in September).

My favorite movie of all time!!!
You feel it didn't hold up???
Why I oughta...right back at you! lol

Actually, I agree with you, Ivan, that the film doesn't hold up...in fact, I probably liked it less than you did. I hate the word stagey (one of the most overused put-downs in all of movie reviewdom), but in this case, I could feel the mechanics of a stage play grinding beneath all the talented performances and it grated on me.

I will admit to being utterly delighted when I realized that I was actually watching Oedipus Rex (that's it, that's the story) in a police station and Kirk Douglas' performance does wonders in making McLeod sympathetic and tragic but...nope, it still doesn't hold up for me.

I've only seen it one time, so I can't say whether it holds up for me on multiple viewings, but I loved it that first time. I picked it up expecting a run of the mill film noir, and it was MUCH better than I expected. Some stiffness on Eleanor Parker's part perhaps (she's much better in other things), but everything else is pretty top-notch.

I have a fondness for "stagey" movies as they are my only opportunity to get a taste of what was popular on the Great White Way way back when. "Detective Story" is a movie that holds up well for me and then on a subsequent viewing slips a bit, and then later on makes a comeback. Only Joseph Wiseman's OTT characterization irks me, but I honestly don't know how else he would play such a character. I'll have to wait and see how things go next time around.