Every once in a while, Netflix adds a bunch of old cheapies to its offerings. I doubt very much this is any kind of service to its subscribers, other than to counter the complaints that they don’t offer any classic (i.e. “old”) films. It’s probably a matter of the price being right.

But I stumbled across two films based on the works of Ed McBain, the pseudonym of Evan Hunter, author of the 87th Precinct novels. They are what is known in the mystery novel genre as “police procedurals.” Instead of a classic whodunit with a drawing room full of suspects, it has more to do with the dogged determination of big city cops.

Cop Hater (1958) stars Robert Loggia as Det. Steve Carelli, in an unnamed city comparable to New York. The story begins with the shooting of a cop, and the case is assigned to Carelli and his partner, Det. Mike Maguire (Gerald O’Loughlin).

Part of the appeal of the 87th Precinct stories is the peek inside the private lives of the cops. Carelli is involved with Teddy Franklin, a deaf mute, but they seem to communicate just fine. Det. and Mrs, Maguire, not so much. It is clear from her introduction theirs is a rockier relationship, largely due to the stress of Mike’s job.

That stress only increases when another cop is gunned down. One theory is it’s some sort of vendetta by the teenage games. A reporter (Gene Miller) follows the lead on his own, but when a patrolman in plain clothes is mistaken for the reporter and beat up, the cops become more involved. They haul in the entire roster of hoodlums, which includes a VERY young Jerry Orbach. 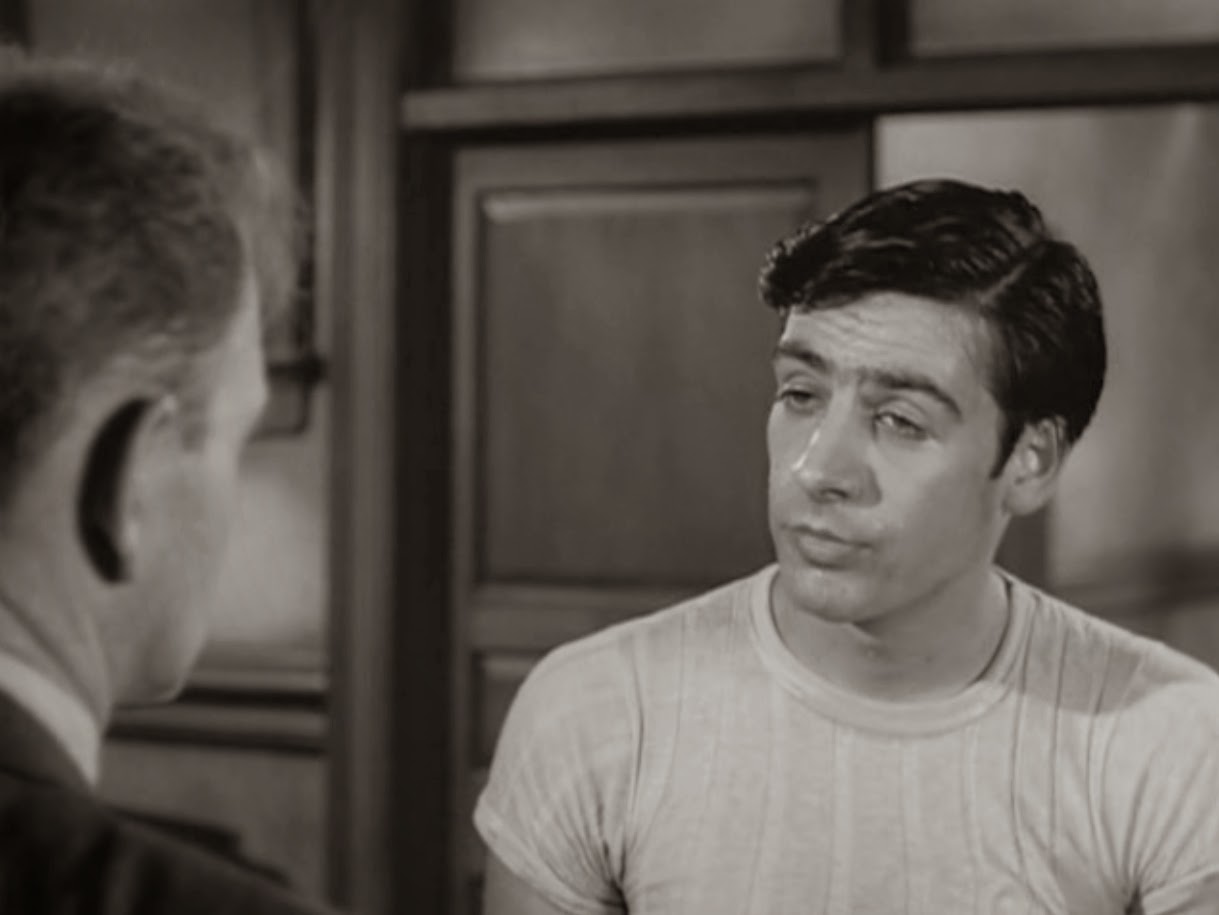 When the same reporter plies him with alcohol, Carelli unwittingly puts himself and Teddy in the crosshairs of the killer. This eventually leads to the capture of the gunman and the source of the killings.

The film was directed by William Berke from a script by Henry Kane. Whether or not it’s a good film is hard to say. Devotees of gritty crime fiction might enjoy it, and it’s relatively condensed so it doesn’t drag. I would compare the film to a hamburger: it does not excel artistically, but satisfies a need quite nicely. As a fan of the 87th Precinct novels, I enjoyed seeing another screen adaptation 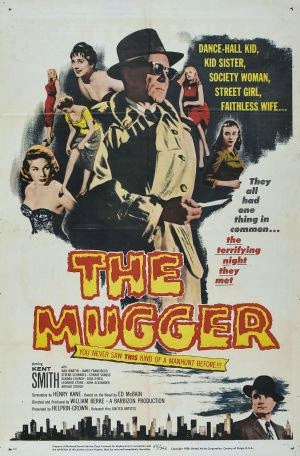 The same could not be said of The Mugger (1958), also directed by Berke from a script by Kane, based on a story by McBain. It’s not an 87th Precinct story but it easily could be the same universe.

Kent Smith plays Dr. Peter Graham, a police psychiatrist working to help capture a mugger with a peculiar M.O.: all his victims are female, from whom he takes their purse and then slices their cheek. Indications are the culprit is educated and almost apologetic, leading Graham to believe the crimes are rooted in psychological affliction rather than the need for easy money.

On his way to follow a lead, Graham is waylaid by cab driver buddy Eddie Baxter (James Franciscus). Eddie, who is in pharmacy school by day and driving a cab at night, has a problem in his wife’s 18-year-old sister, Jeannie (Sandra Page), who lives with them. Jeannie has become defiant, and Eddie and his pregnant wife don’t like that she’s taken a job at the Coquette, an old-fashioned dime-a-dance hall. 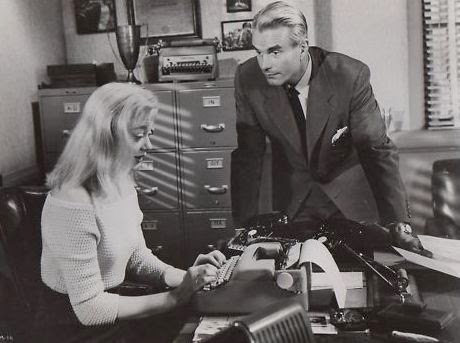 Coincidentally, Graham’s girl, police officer Claire Townsend (Nan Martin), is working undercover at the same club. Graham asks her to keep an eye on her for the duration of her assignment. Later, Claire is assigned as a decoy in the hope of baiting the mugger. This provides a clue, but Graham and his team (played by Dick O’Neill and Leonard Stone, famous as Violet Beauregard’s father) are sidetracked when Jeannie is found murdered, apparently the first fatality of the Mugger.

Investigating the killing, Graham shares with Eddie vital information withheld from Jeannie’s sister: that Jeannie was three months pregnant. Claire meanwhile remembers seeing Jeannie in the company of a young man, but her description could match that of thousands of people. 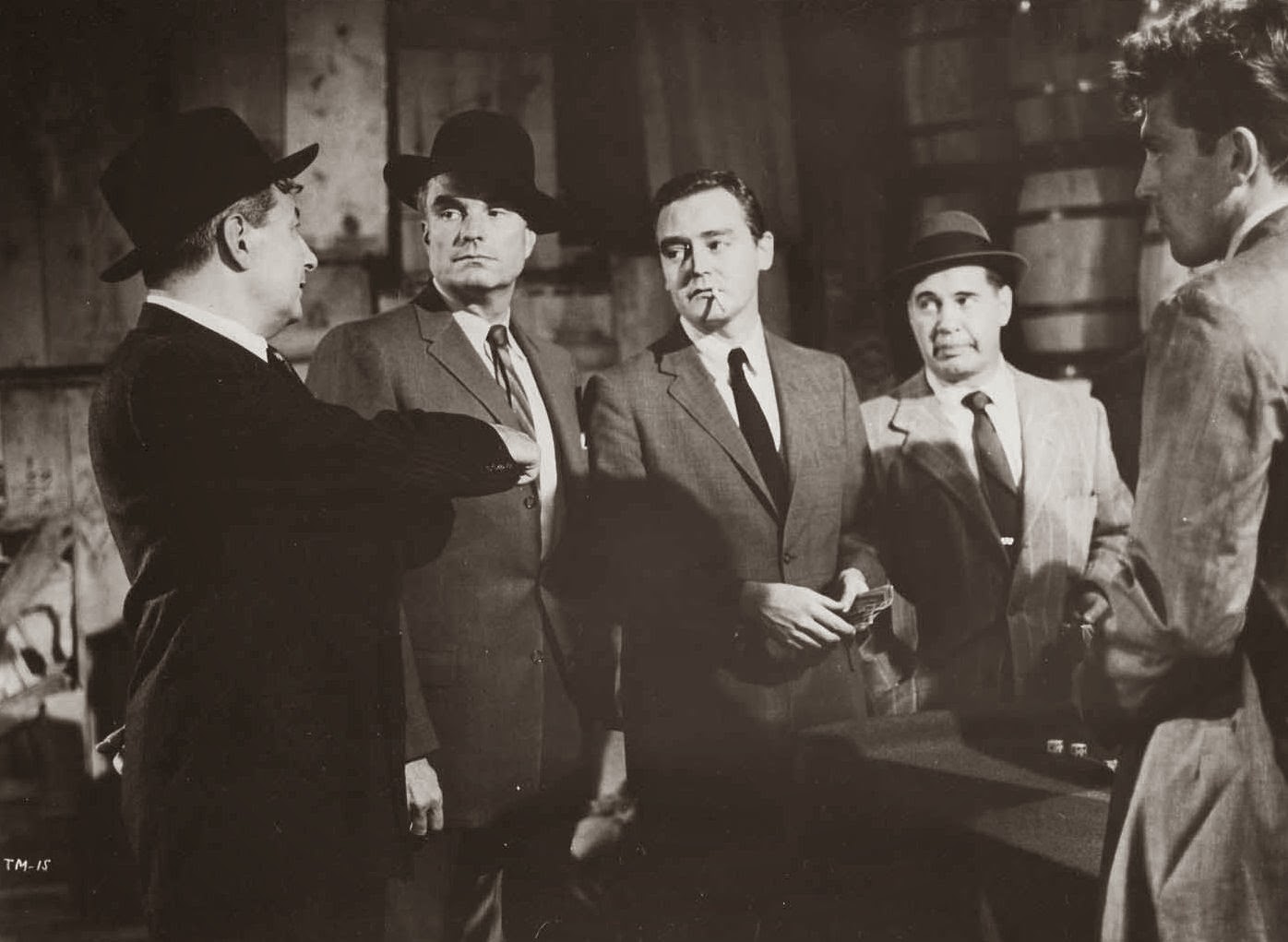 Graham & Co. begin to pursue the mugger leads, and the scope of their investigation narrows. But when they finally catch up to the Mugger, he denies any involvement with Jeannie, or knowledge of her murder. While chasing leads together, Graham and Claire (Phil’s note: This scene really bothered me. It was filmed in part on location, a city street, but alternating shots were filmed using rear projection, in which actors are filmed against a screen displaying a “moving backdrop.” Shifting from location to rear projection was rather jarring, especially as it was so inexplicable. But I digress.) come across the near-solution to the crime, and as they follow-up, the culprit becomes clear. Chase, punishment, the end.

As far as mysteries go, The Mugger is mediocre at best, the solution painfully obvious. To me, the most intriguing aspect of the film was Nan Martin, who clearly was a lovely young woman back in the late 1950s. How she came to be cast as department store owner Mrs. Louder on The Drew Carey Show is beyond me.

But perhaps that can be answered in one word: ACTING! 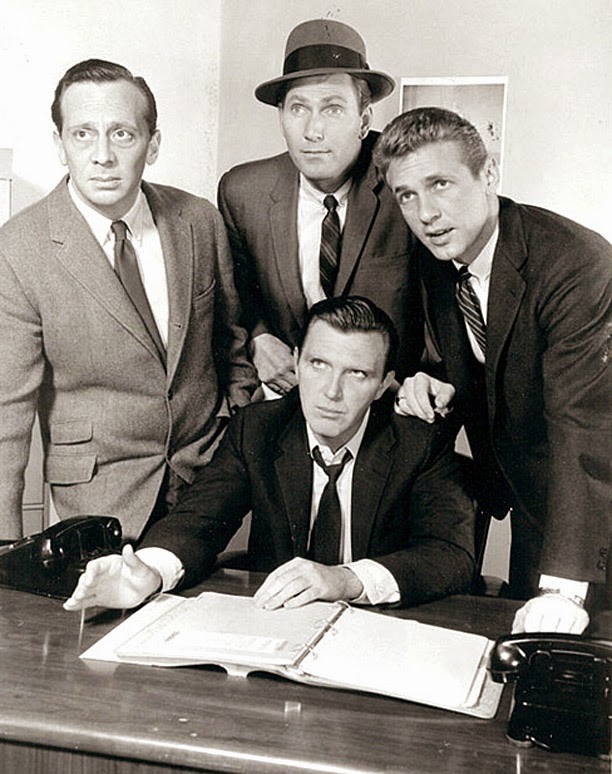 Ivan’s note: Not to steal Mr. Schweier’s thunder…but your humble narrator has penned an essay on the TV series based on McBain’s 87th Precinct franchise, which can be perused here at ClassicFlix.
Posted by Ivan G Shreve Jr at 2:00 PM

I really like the McBain originals but have always been slightly bewildered by the decision to cut the 87th out of THE MUGGER - really enjoyed the post, thanks.