Adventures in Blu-ray: In the Land of the Head Hunters (1914) 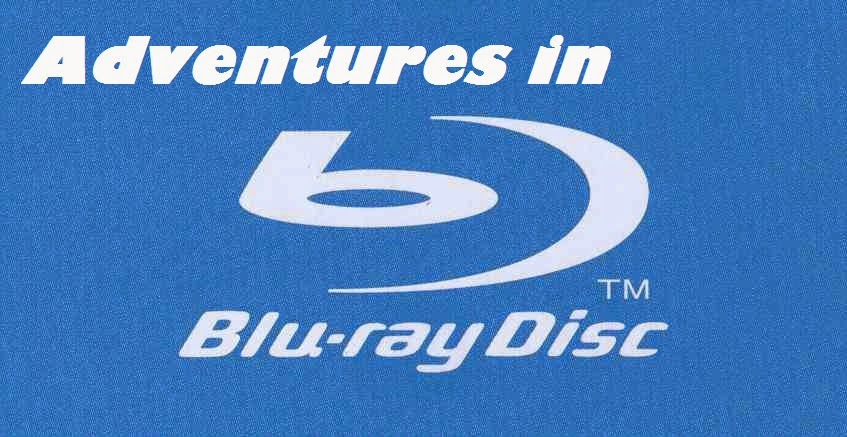 Though technically not a motion picture director, Edward Sheriff Curtis devoted his life to capturing images on film; he was a renowned photographer who chronicled much of the history and culture of both the American West and Native Americans.  Curtis numbered among his friends President Theodore Roosevelt, not to mention a generous patron in John Pierpont Morgan, whose unlimited wherewithal funded much of what would become Curtis’ lasting legacy: a twenty-volume series known as The North American Indian.  Even today, his original photographs fetch staggering sums among collectors. 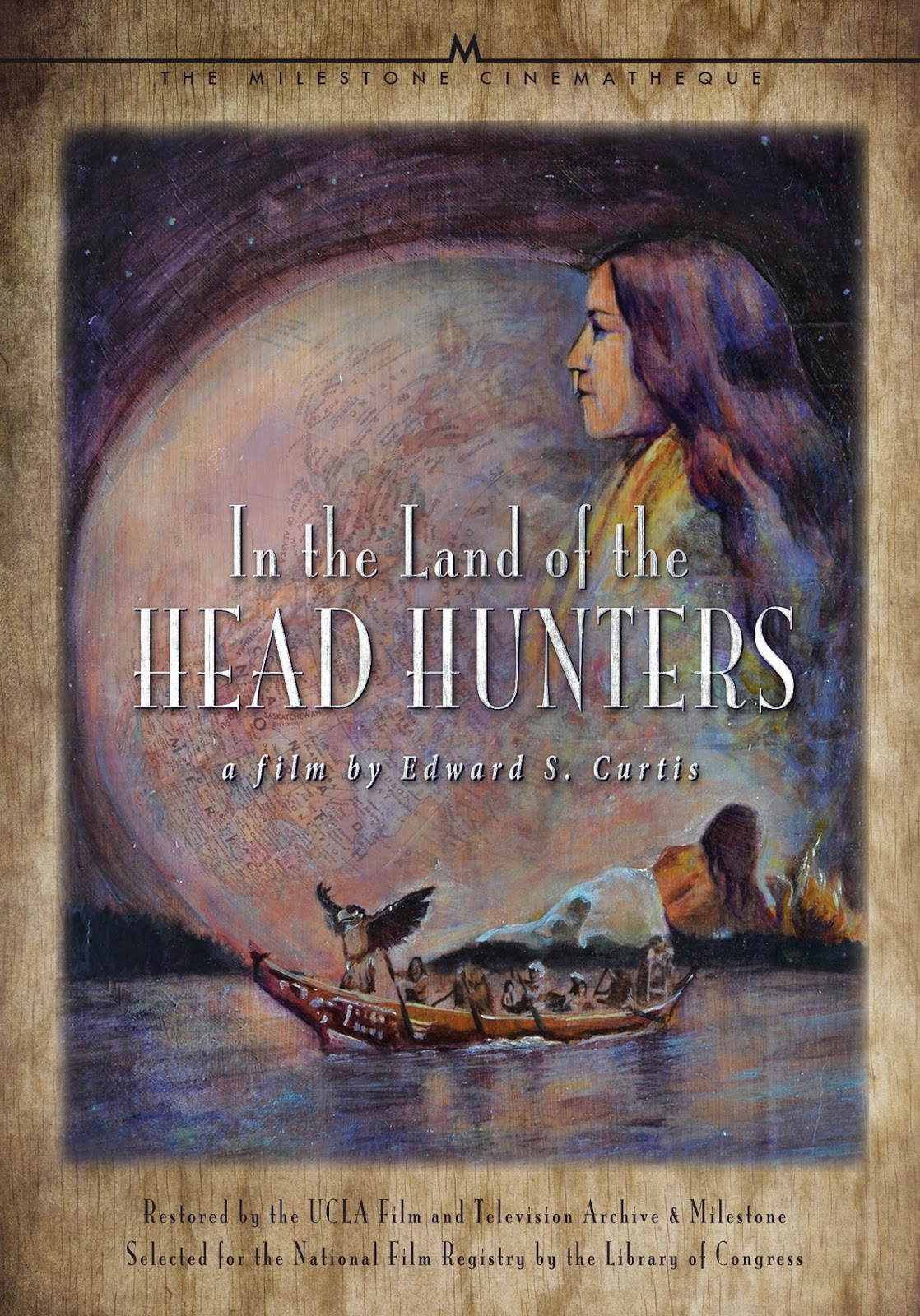 But even with the deep pockets of J.P. Morgan, Edward was flat broke ten years into chronicling The North American Indian.  Curtis had an ambitious plan to cull together investors for a movie project that would provide him security and solvency, and his roll-of-the-dice gamble was a fictional film depicting the life of the Kwakiutl people (now referred to as Kwakwaka’wakw) living on Canada’s Vancouver Island.  Keep in mind the ambitious nature of this project—though a few movie directors were dabbling in longer features, Curtis’ film was produced before D.W. Griffith’s celebrated The Birth of a Nation (1915).  Using several individuals from the Kwakiutl tribe—and relying on his skills and those of his admittedly inexperienced crew—Edward S. put together In the Land of the Head Hunters (1914), a motion picture that opened to much critical praise and respectable box office.  However, a legal dispute with Head Hunters’ distributor—the fledgling and short-lived World Film Company—over who would pony up the funds to take the movie to other markets killed any future opportunities for profit. 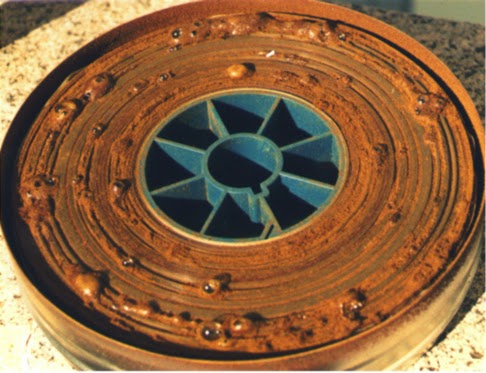 For many years, all that remained of Head Hunters was a shortened 16mm version that was released in 1973, retitled In the Land of the War Canoes.  The original 35mm reels of the movie had succumbed to nitrate decomposition (speeded up by Curtis’ insistence on using color tints and tones in what was labeled “the Hochstetter process”) but fortunately had been transferred to 16mm by the Field Museum of Natural History before they crumbled to dust.  In addition, two 35mm reels had been discovered by film preservationist David Shepard in the 1970s and donated to the UCLA Film and Television Archive.  A lengthy period of “button, button—who’s got the button?” followed, with neither archive certain as to the whereabouts of the surviving materials.  Academics Brad Evans and Aaron Glass eventually recovered the missing elements, not to mention a hefty number of copyrighted film frames that had been placed in the Library of Congress.  (The LOC put In the Land of the War Canoes on the National Film Registry in 1999…even though the original film probably hadn’t been seen in its entirety since the 1940s.)  Along with Glass’ discovery of the film’s original score (by John J. Braham, believed to be the oldest surviving orchestral film scores according to the people involved in the project) at the Getty Institute, a joint effort by the Getty, UCLA and the Field Museum began to restore Head Hunters as close to its original presentation released over one hundred years ago.  Milestone Films released the finished project on both Blu-ray and DVD in February, and once again—due to the kindness of Dennis Doros—I got the opportunity to see this fascinating historical document. 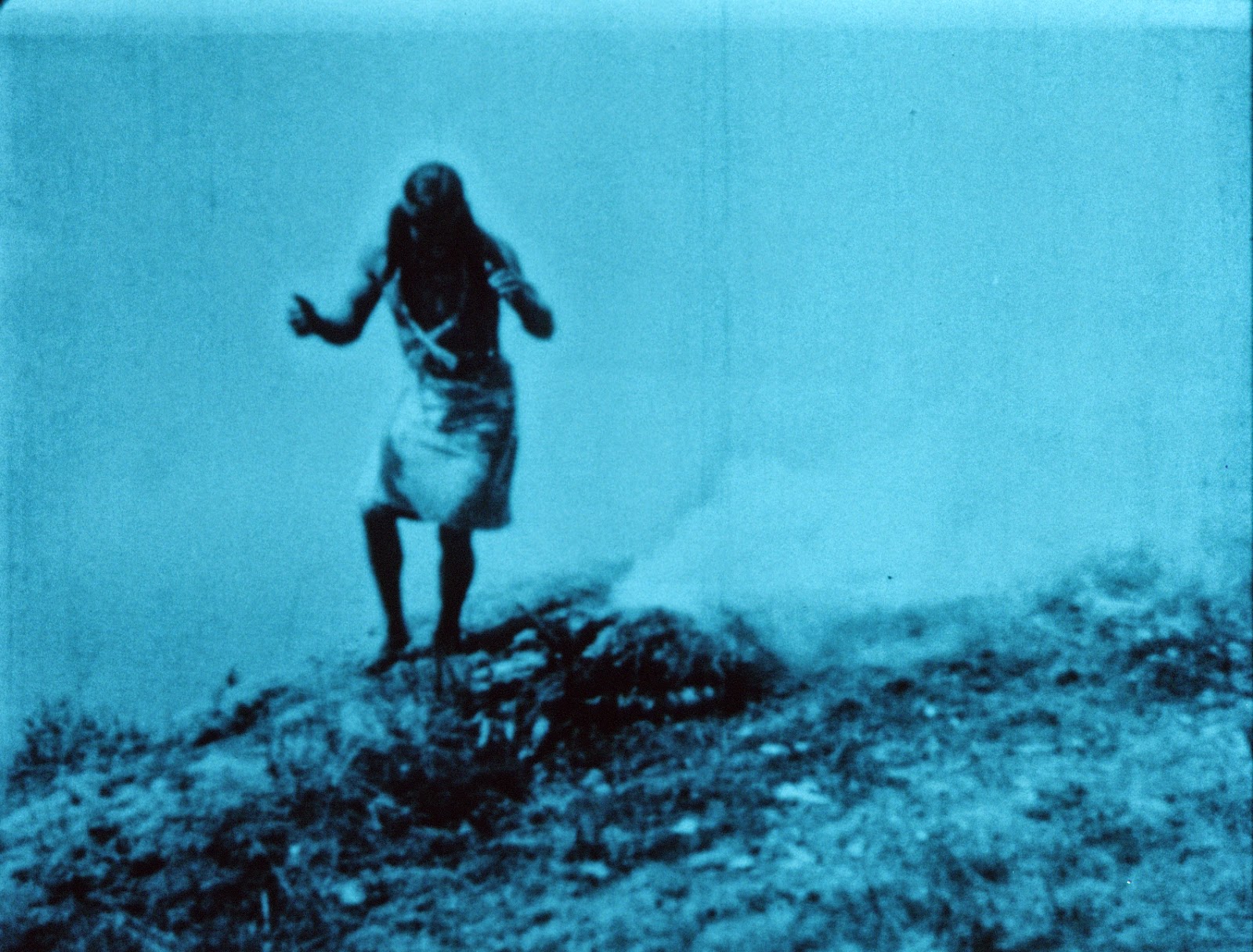 In the Land of the Head Hunters tells a fairly simple story.  Motana, the son of a great chief, heads out on a vision quest that involves the hunting of whales and sea lions.  During his journey, he sees the vision of a princess named Naida, and though he falls for her their love cannot be since she has been bequeathed to a Sorcerer from a rival tribe.  Undaunted, Motana makes short work of The Sorcerer and claims Naida as his bride; they are married, but Yaklus, brother of The Sorcerer attacks Motana’s village on the day of the wedding and spirits the newly married Mrs. Motana away.  This aggression, however, will not stand; Motana reclaims what is his and in following Motana back to his village Yaklus and his men perish in the raging waters of the sea. 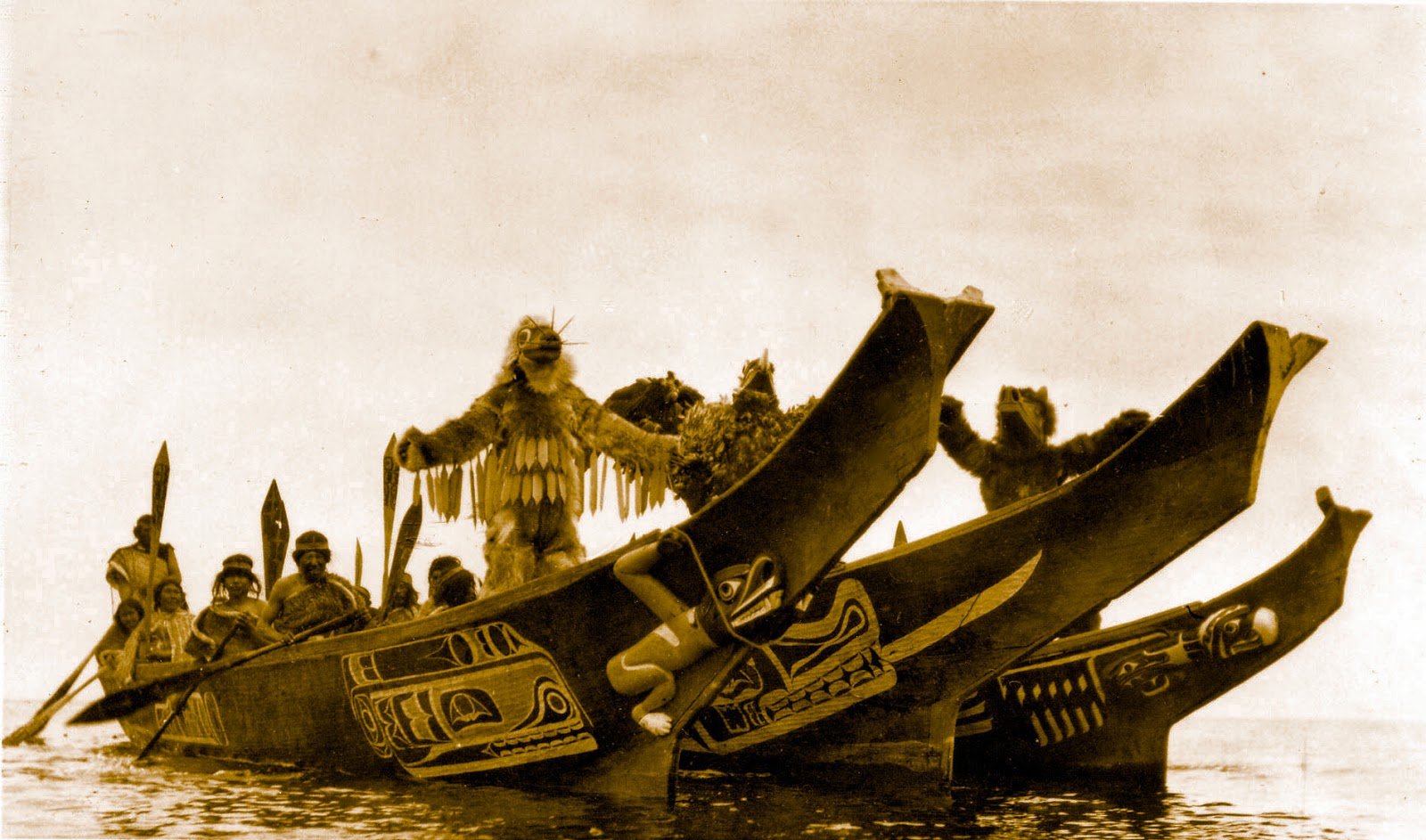 My interest in seeing Head Hunters stemmed from my lifelong love of and fascination with silent films, and Hunters is unquestionably a mesmerizing viewing experience.  I won’t lie to you: it’s not an easy movie to watch, because even though the finished project is as complete as it can be it still has a few gaps in the narrative, and Head Hunters demands patience and attentive viewing.  But the rewards are ample: the film, which in ways echoes the landmark documentary Nanook of the North (1922) despite its fictitious nature, offers an absorbing look at the culture of the Kwakiutl nation—their canoes, their costumes, their dances and their dwellings.  It’s probably one of the earliest examples of what many would call an “art film” (and explains why Curtis wasn’t able to recoup much from his original investment). 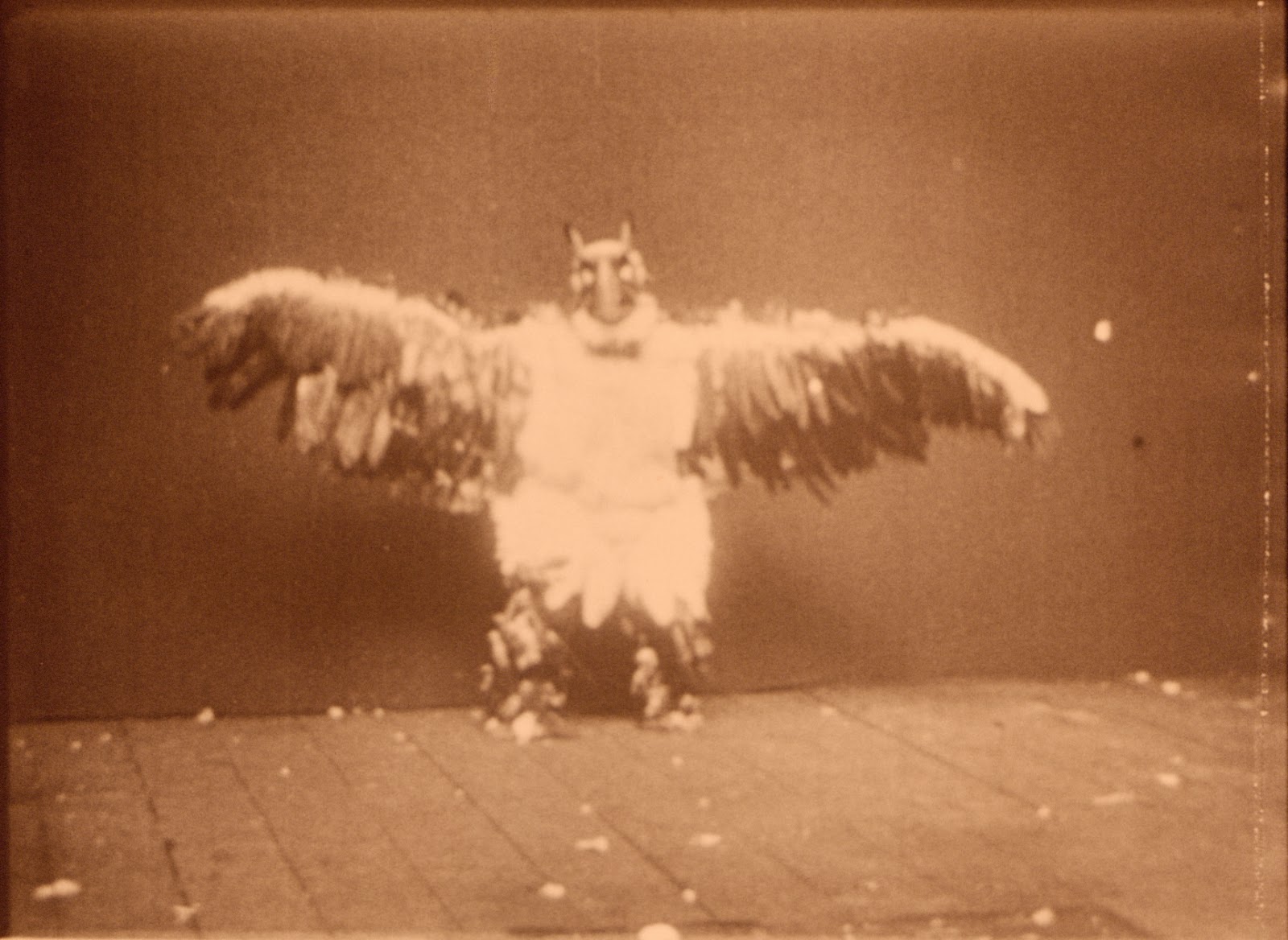 Milestone doesn’t skimp on the extras in their releases (the material here is so plentiful it takes up two Blu-ray discs!).  Included with the presentation of Head Hunters is the shortened 1973 version of In the Land of the War Canoes, as well as “making of” documentaries, a stills gallery and a featurette about the Gwa’wina Dancers, who were part of the presentation when In the Land of the Head Hunters made its return for a public viewing in 2008.  Because I wanted to make certain I had a richer understanding of the material, I opted to listen to the commentary track (featuring Glass, Bill Holm and Andy Everson—whose grandmother played “Naida” in several scenes) instead of Braham’s score (performed by The Turning Point Ensemble, in collaboration with The Vancouver Film Orchestra).  Though I’m not sorry I did this (the score will have to be savored during a second viewing)—there are a lot of interesting tidbits revealed in the commentary, notably how Curtis had his actors don dark wigs despite many of them having light-colored tresses—it helps to have a point of reference for some of what’s discussed there.  A look at the supplementary featurette Documents of Encounter: The Head Hunters Reconstruction Project will help you out enormously in that regard.

In the Land of the Head Hunters provides not only captivating entertainment for the silent film devotee, but it’s a must-see for Native American scholars and students of an important era of history.  For more information on the project to restore this amazing movie, click here.
Posted by Ivan G Shreve Jr at 8:00 AM