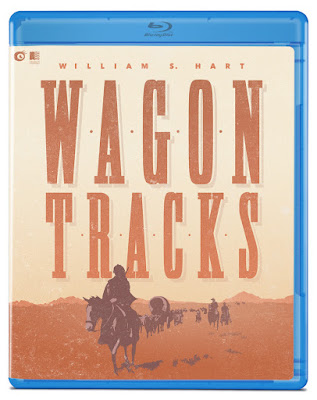 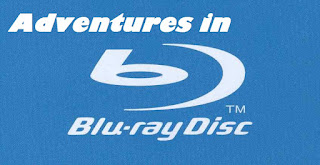 After appearing on stage for many years as a respected actor, William S. Hart made his debut “in the flickers” playing Messala in a 1907 production of Ben-Hur.  This is not, however, what cemented Hart’s cinematic immortality; beginning in 1914, Bill began appearing in two-reel westerns (which later expanded to feature film length when the shorts proved quite popular) for producer Thomas H. Ince.  The market for oaters was pretty much glutted at that time, yet Hart stood out from his cowboy movie brethren and inarguably became one of the first major sagebrush stars in the movies.  Hart made over seventy films between 1914 and 1926; not only as an actor but also a screenwriter, director, and producer.  His movie legacy includes such classics as Hell’s Hinges (1916), The Return of Draw Egan (1916), The Toll Gate (1920), and Tumbleweeds (1926—his final starring film). 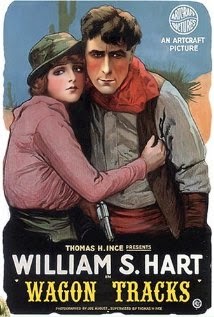 In Wagon Tracks (1919), Bill plays “Buckskin” Hamilton—a desert guide who has traversed the Santa Fe Trail to Westport Landing, MO.  Hamilton’s purpose for his journey is to meet up with his younger brother Billy (Leo Pierson), who’s just graduated from medical school.  Alas, poor Billy will never get the opportunity to take the Hippocratic Oath…for he’s gotten involved in a riverboat card game with crooked gambler Donald Washburn (Robert McKim)—a title card informs us that Washburn had to beat a hasty retreat from St. Louis because of his activities; he’s currently on his way to Santa Fe with his sister Jane (Jane Novak) and her fiancé Guy Merton (future Warner’s director Lloyd Bacon) at his side.

During the game, Billy discovers that Washburn is cheating…and in a mutual exchange of temper, guns are drawn.  Jane steps in to stop things from escalating, but it appears that in her struggle for Billy’s gun she shoots and kills him.  In explaining the incident to the ship’s captain (Charles Arling), Washburn spins a yarn that Jane was forced to gun Billy down after the young man’s intentions proved less than honorable…and conveniently leaves out the part about him trying to rook Hamilton in poker. 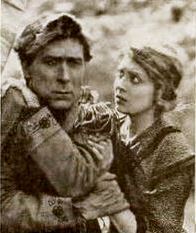 Buckskin is devastated by the death of his brother.  He tells Jane that while he believes it was an accident, he’s convinced there’s more to the story than she’s telling.  Buckskin will get the opportunity to exact a little frontier justice (with the help of a band of Kiowas) when he agrees to head up the wagon train on which Merton and the Washburns are traveling…because during that trek to Santa Fe, Jane eventually reveals the truth.

A morality play set against the background of the “go west, young man” trek in the mid-1800s (the time frame is 1850, shortly after the California gold rush), Wagon Tracks showcases William S. Hart at his Western finest.  The film was praised effusively by film critics at the time of its release, none more so than the Los Angeles Times: “The great desert screen epic is with us at last.  It has been done by William S. Hart and C. Gardner Sullivan, with the aid of a fine cast and superlative photography…”  The reviewer went on to call Sullivan’s screenplay “a masterpiece.”  A little closer to home, the Atlanta Constitution (this is years before it merged with The Atlanta Journal) gushed “No one who sees this picture will soon forget it.  It will be a vivid memory for months afterward.” 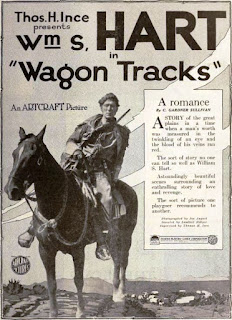 Maybe it was a slow week at the neighborhood cinema when these critics sat down with an overpriced box of popcorn and cup of soda…but Wagon Tracks is a little overpraised.  I don’t want to give the impression that I’m down on the film, however; it is very much worth the time to sit down with it, because the performances and photography are first-rate.  Bill Hart had a very impressive background as a Shakespearean actor, and he is most effective throughout Wagon Tracks—particularly the scene in which he grieves over the loss of his brother.  The movie’s plot also features a nice twist that I will not reveal for those who have not seen it.  Tracks was directed by Lambert Hillyer, an accomplished journeyman whose talent for B-westerns has been discussed previously here on the blog (Gun Law Justice).

Wagon Tracks is important because coming January 24 (this Tuesday), it will be the first of Hart’s films to receive treatment on Blu-ray.  In a press release from Olive Films, Alex Kopecky observes: “William S. Hart was an iconic performer, and it’s hard to believe that he has been missing from Blu-ray collections until now.”  The movie, due to its public domain status, has been available on YouTube and DVD (Grapevine Video, Sinister Cinema, etc.) for several years…but the Olive Films release is the one you definitely have to purchase.  Mastered for home video from an original 35mm nitrate print courtesy of the Library of Congress, this version of Wagon Tracks is positively breathtaking.  (I was very impressed by the film’s tinting—particularly those scenes illuminated by campfires, where the movie is bathed in an orange glow—and the original score composed by Andrew Earle Simpson.) 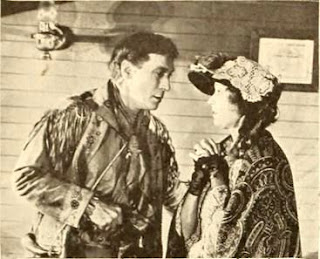 When William S. Hart passed on in 1946, he designated in his will that his 265-acre ranch be transformed into a public park and museum.  “When I was making pictures, the people gave me their nickels, dimes and quarters,” he stated.  “When I am gone, I want them to have my home.”  Hart not only gave us his home, he left behind a rich legacy steeped in the genre we know as the movie Western, and Wagon Tracks is an excellent example of what made “Two-Gun Bill” a solid audience favorite.  (Generous thanks to Olive Films’ Bradley Powell for providing Thrilling Days of Yesteryear with this wonderful screener.)
Posted by Ivan G Shreve Jr at 8:19 AM