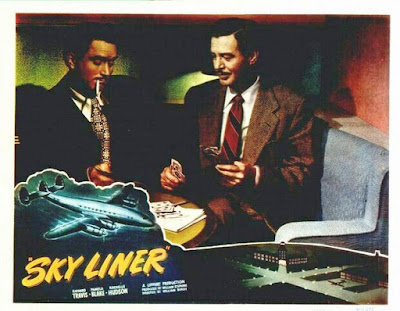 State Department official George Eakins (John McGuire), scheduled to leave for a conference in L.A., receives a sealed envelope containing his orders by courier.  Eakins will never get on that plane to the Coast, however; a shadowy figure enters the office and pistol whips him, rendering him quite dead.  His secretary, Amy Winthrop (Rochelle Hudson), immediately emerges as a “person of interest” because her seatmate (Steve Pendleton) on that plane—identified only as “Mr. Smith”—has told the airline people he’s Eakins.


Smith has another confederate on the same flight—foreign agent Bokejian (Steven Geray), who trades the sealed envelope originally handed to the real Eakins for five large.  Opening the envelope, Bokejian finds its contents consist of several blank sheets of State Department stationery…and because he believes “caveat emptor” to be a steaming pile of bovine excrement, he dispatches his ex-friend Smith to The Happy Haunting Ground with curare concealed in his fountain pen.  (This is not spoiling anything, by the way.  It’s obvious Bokejian is the murderer.)  Fortunately for the remaining passengers, there’s a Fed on board—Steve Blair, who takes quick control of the situation even though he’s played by the same actor (Richard Travis) who was Inspector Bruger in last week’s movie, Roaring City (1951). 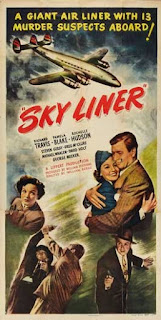 Where to begin with Sky Liner (1949)?  I’ll say this for it—it makes Motor Patrol (1950) look like La règle du jeu (1939).  The tagline for this programmer reads “a fast paced and different kind of mystery thriller,” but there’s nothing remotely “fast paced” about Liner, and as for “different”—well, it would be unfair of me to say, “What makes it ‘different’ is that there’s nothing ‘thrilling’ about it” because it wouldn’t be the first movie I’ve watched that promised excitement and suspense and delivered neither.  It’s a static, talky B that keeps an unblinking eye on a stopwatch until its 61 minutes is up, and then announces it’s time for the wrap party.

Even then, the version of Sky Liner on the Forgotten Noir & Crime Collection Vol. 4 set (available at The Sprocket Vault) is a truncated version of the film, running at 49 minutes (DVD Talk’s Stuart Galbraith IV speculates it might be either a shorter UK release version or a TV cut).  The info on the movie at the American Film Institute mentions there’s an “obnoxious child singer” among the passengers…so it sounds like I lucked out here, because the kid in the print I watched does no singing.  “Amazingly, Sid Melton isn’t in this one,” observes Galbraith…but I was so bored watching the thing I kept hoping Sid would emerge from the plane’s washroom at some point.  Speaking of which: 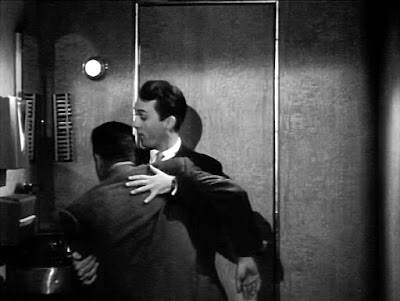 That washroom is larger than one we have here at the house.  There a lot of familiar Lippert faces in Sky Liner—Travis, Pendleton, Pamela Blake (as the stewardess), Michael Whalen, etc. (Margia Dean must have been furious with her agent)—and Robert L. stalwart William Berke (or “Wm.,” as it says in the opening credits) handles the directing chores (with a screenplay by the ubiquitous Maurice Tombragel).  I can’t in good conscience recommend you stop what you’re doing to sit down with this one, but if you’re trapped in a waiting room with fifty minutes to kill…you could do worse.

Next week: the return of Crime Does Not Pay!

"You are trapped in a waiting room for fifty minutes. SKY LINER is on TV, from which there is no... Escape!"


Okay, you're talking about how boring the film is, then complaining that this is a SHORT version!

"The food in this restaurant is terrible----and such small portions!"

RMR pointed to the map:

Okay, you're talking about how boring the film is, then complaining that this is a SHORT version!

"The food in this restaurant is terrible----and such small portions!"

I guess I've never been a "count your blessings" kind of guy.