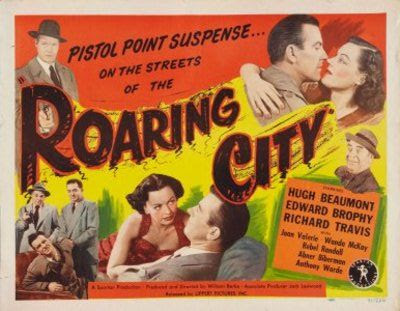 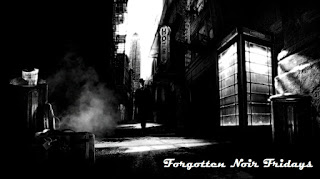 “Murdered men flock to you like flies around a molasses jug, O’Brien,” observes San Francisco cop Inspector Bruger (Richard Travis), having discovered his nemesis, private shamus Dennis “Denny” O’Brien (Hugh Beaumont), lying beside a man who appears to be in the advanced stages of death.  “I could get all the killers in this town by just sticking to you and waiting for the bodies to drop into your lap.”

“You’d be one up on the way you do things now,” is O’Brien’s hardboiled reply…and we’re off to the races with Roaring City (1951)—a Robert L. Lippert-produced programmer whose title seems more fitting for a western than a crime picture.

Roaring City is a B-quickie made up of two unaired television episodes from an attempt to bring the Jack Webb radio classics Pat Novak…for Hire/Johnny Madero, Pier 23 to the small screen.  The above dialogue exchange is from the second half of the film; Novak Madero O’Brien is hired by a damsel in distress (Joan Valerie) to pose as her stepdaughter Sylvia’s (Wanda McKay) spouse for a C-note.  It seems that Bill Rafferty (Anthony Warde), Sylvie’s old beau, is back in town and Syl is worried that Rafferty might do something terribly dangerous once he finds out about their marriage.  The unfortunate shmoe that winds up dead alongside the unconscious O’Brien was first introduced to Denny as her cousin Steve…but in his attempt to clear himself of a homicide rap, our hero learns that “Steve” is in actuality Sylvia’s husband.

The first story in City finds O’Brien hired by skeevy fight manager Harry Barton (Stanley Price) to lay down several $1000 bets on a pugilist named Ham Harper—who’s going to win a fight against Barton’s fighter, Vic Lundy (Greg McClure), because Lundy is going to take a dive in the first round.  Things do not go as planned; Lundy ends up winning the bout (Harper was not in fighting trim…and he had a blood clot near his brain) and is rewarded by being murdered not long afterward.  Like bad Kabuki theater, Bruger is convinced O’Brien is responsible, necessitating that Denny follow the clues pointing to a gambler named Ed Gannon (William Tannen).

DVD Talk’s Stuart Galbraith IV believes Roaring City is the worst film in the Forgotten Noir & Crime Collection Vol. 4 set (available from The Sprocket Vault), forgetting that it has formidable competition with Radar Secret Service (1950) and Motor Patrol (1950), both in the same compendium.  I’m able to cut City a little more slack because I’m so familiar with its source material…while in the same breath recognizing that a TV show based on Jack Webb’s waterfront creations probably wouldn’t have had much success.  The dialogue on Novak/Madero is a hilarious parody of hardboiled detectives…and while City faithfully reproduces this (leafing through a drawer, Beaumont’s O’Brien finds a calendar featuring models “who posed without telling their mothers”), visually there’s very little director William Berke can add to the proceedings.  Seriously, you could close your eyes while this movie is on and miss very little of the action…particularly since O’Brien’s voice-over narration tells you all you need to know (and in more than one instance, is repeated again in dialogue with other characters).


Galbraith disses my man Ed Brophy, whom I have applauded in previous reviews for Danger Zone (1951) and Pier 23 (1951) for attempting to do something out of his wheelhouse in his portrayal of “Professor” Frederick Simpson Schicker, O’Brien’s frequently inebriated confidant:

Brophy's character is a real oddity. The actor had a thick Brooklynese accent that was instantly recognizable; he was short, bald, and bug-eyed - ideally suited for none-too-bright comic henchmen parts. But here someone got the bright idea to cast him as an erudite (if alcoholic) British professor (Red Flag! Red Flag!) who speaks floridly, gesturing like John Barrymore. Brophy plays it with an English accent, but some of the woids don't quite come out right. The effect is bizarre: it's like when Stan Laurel bonked his head in A Chump at Oxford and started talking like C. Aubrey Smith.

Hey…I’ll admit Brophy is no Tudor Owen—but give the man props for not being afraid to experiment.  Next week on the blog: I’ll wrap up the “Forgotten Noir” series with Sky Liner (1949).  When that’s finished—TDOY will resurrect the long-dormant feature “Crime Does Not Pay (As Well as It Used To).”