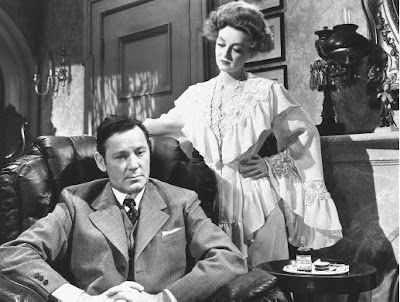 …and now that I have your attention, I just wanted to take a quick moment to shill my latest essay that’s up at the weblog beloved by cinephiles and couch potatoes alike, Edward Copeland on Film…and More— or ECOF, as I sometimes refer to it…particularly when I’m too lazy to type all that out.  Seventy years ago on this date, the film adaptation of Lillian Hellman’s stage hit The Little Foxes was packin’ ‘em in the movie the-ay-ters, and though Hellman’s Broadway chestnut about a really despicable and wealthy Southern family is starting to show a few crow’s feet, it’s still first-rate entertainment…with one of my all-time favorite Bette Davis performances taking center stage (her characterization of Regina Giddens is so pure dagnasty evil I can’t take my eyes off of her anytime she’s on screen). 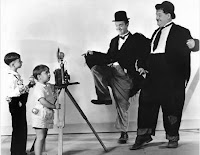 As I was tooling around the Shreve-TV Me-TV website for some pictures to poach…er, borrow for yesterday’s TV-on-DVD post I came across this page that offers up a preview of what’s in store for viewers this fall; I mentioned the Chicago-based cable channel had plans to add Star Trek and Batman to their lineup but they’ve also obtained a few cast-offs from the Retro Television Network in The Rifleman, Peter Gunn and Daniel Boone.  Old TV favorites like Voyage to the Bottom of the Sea, Lost in Space and Mission: Impossible (RTV used to have this back in the days when they were getting their shows from Viacom ‘cause I used to watch it before I hit the hay in the evenings) are also on tap, not to mention (to tie this in to yesterday’s post) the comedic antics of Stan Laurel & Oliver Hardy—I just hope it’s not that godawful show that CBN used to run many moons ago…that presentation was the yardstick by which “abomination” should be measured.

Oh, The Little Foxes! Back-to-back best film with The Letter for Bette Davis, at least in my humble but correct opinion...

I LOVE The Rifleman, Peter Gunn, Daniel Boone -- those were men I just loved as a kid! I'd like to get my hands on those -- the DVDs I mean!

Evil personified, for sure. I love Bette Davis in both films, Becky.

I also loved THE RIFLEMAN, PETER GUNN, etc. Also MISSION IMPOSSIBLE. I've been meaning to have my own M.I. Marathon.

Ivan - I LOVE this line "...that presentation was the yardstick by which 'abomination' should be measured.'

Again, you've made me laugh out loud. Always a good thing.