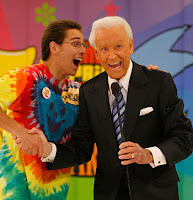 I know that last Thursday that I promised to have the remaining Thrilling Days of Yesteryear giveaway prizes mailed out by last Saturday…and I believe I even stuck in a “scout’s honor” in there for good measure.  Well, I lied.  (And I don’t know if you’re aware of this, but I was drummed out of the Cub Scouts.  Something about fomenting subversion among the other members of the den…they weren’t all that specific when they gave my Mom the news.)  But before you start forming an angry mob, you’ll be happy to know that I did get everything mailed out today.  Yes, indeedy.  Took it all down to the post office, including some books that Mom wanted to get out to sister Debbie that she’s been holding on to since the end of March, so she’s almost as bad as I am.  The reason for my sudden burst of activity is threefold—one; obviously, I needed to get those fabulous prizes out to the winners…so I appreciate everyone’s patience in that delicate matter.  The second reason is that I have some more free swag to give away; the details of which will be announced Sunday…and I’ll just hint and say if you’re a sitcom fan, you’ll definitely want to get in on this.

The last reason is that I myself was the beneficiary of some free stuff, courtesy of my Facebook saddle pal Lloyd at his luxurious Vegas spread of Rancho Mardecortesbaja.  Lloyd recently ordered the Warner Archive box set The Monogram Cowboy Collection,Volume 1 and as luck would have it…they accidentally sent him two copies.  He asked me if I’d be interested in taking the other one off his hands, and I responded with a most emphatic “gimme!” (Lloyd’s a big fan of B-Western Wednesdays here on the blog).  There’s some great rootin’ tootin’ shoot-‘em-up fun on this three disc-set that contains nine westerns starring Jimmy Wakely, Johnny Mack Brown and Rod Cameron…and the best part of it is I only had one of the films on the set (Wakely’s Oklahoma Blues, which I taped off of TCM a good while back) so there’ll plenty of fodder available for our regular Wednesday feature. 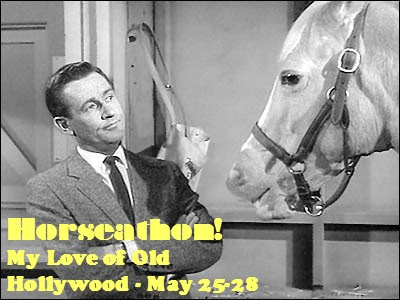 Our good friend and Shirley Temple Fan Club president Page at My Love of Old Hollywood is hosting a horse-themed blogathon in May (which I discussed in this space last week) but the response has been so positive she’s added a fourth day so the dates on that will be May 25-28.  She’s in the process of putting together new banners with the revised date change but I decided to concoct one of my own (above). 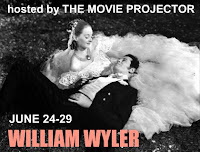 A blogathon that I had planned to mention last week but the details were still being hammered out (and I didn’t want to steal his thunder) is R.D.’s William Wyler Blogathon at The Movie Projector, which will take place from June 24-29.  (The Academy Award-winning film director will celebrate his 110th natal anniversary on July 1.)  There’s an amusing story behind TDOY’s selection for this event (it involves a lot of “e-mail tag”) but I’ll be reviewing 1965’s The Collector (yeah, the one with the creepy guy whose hobby is butterflies) on the 28th—for a full list of the films to be examined and the participants, you’ll find all the pertinent information here.
Also, next week (April 26) I’ll be the “guest linker” at K.C.’s Classic Movies blog.  What will I link to?  Your guess is as good as mine, but since there are no retakes I will simply have to summon forth the requisite intestinal fortitude and pretend like I know what I’m doing. 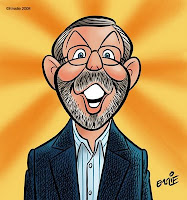 Vulture.com’s review of the travesty that is the new Three Stooges movie featured the headline: “The Farrelly Brothers’ Three Stooges is a Wonder”—which prompted me to crack (via Facebook) “As in ‘I wonder why they made this.'”  Leonard Maltin’s review is not quite as laudatory though also not too disdainful (but Len’s always been a bit squishy—about as mean as he gets is an observation that goes “a really good cover band is still a cover band”)…all I want to say is that such horrible ideas occasionally reap small rewards, as in this honkin’ big DVD box set The Three Stooges: The Ultimate Collection, which will be released June 5th.  (This set features the real Stooges, and contains fewer fart jokes than the Farrelly Brothers flick.) 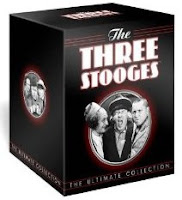 The attraction of purchasing this set is that there are going to be three bonus discs included in the 20-disc compilation; they will include the Three Stooges feature films Rockin’ in the Rockies (1945) and Have Rocket—Will Travel (1959).  But the big draw for us here at Castle Yesteryear is that the discs will contain all of the Shemp Howard shorts—solo, and the ones he did with “The Glove Slingers” and Andy Clyde (only 1938’s Not Guilty Enough is missing)—and the solo shorts with Joe Besser (only 1938’s Cuckoorancho is missing) and Joe De Rita, plus a couple of bonus cartoons released by the Columbia studios (“Color Rhapsodies,” they were called).  At the time the first chronological DVD release of the Three Stooges shorts hit the streets in 2007, there was speculation that these shorts would be put on those sets as extras…so it’s nice to see Sony come through finally on this.  (Some of the Shemp outings, particularly Mr. Noisy and Society Mugs, are first-rate little two-reelers.) 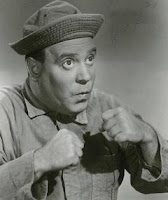 Now…when I first heard the news about this set, my Rage-o-Meter started pegging in the red because I assumed that the company was going to adhere to standard industry practice and make everyone who bought the original sold-separately sets fork over cash for this box set…thus thoroughly pissing everyone off in the process.  The scuttlebutt is that Sony will release this bonus material separately for those who have already collected the earlier Stooge DVDs, so I’m hoping they don’t disappoint.  (Because if they do I’ll give them such a pinch…)
While we’re on the subject of unnecessary remakes, J. Kingston Pierce at The Rap Sheet sums it up better than I possibly could on why this idea for a Vince Vaughn ego-driven Rockford Files remake is wrong in so many ways.  Now, in so many words (see what I did there?), our good friend Yvette tried in good faith to make the case that this wouldn’t be such a terrible thing but a few of her friends (moi included) and a visit from a Mr. Fitch have convinced her that this is just plain crazy talk.  (But, hey…it’s good to talk these things out.)

Speaking of rap sheets, the 14th annual Noir City Film Festival gets underway tomorrow night at the Apollo Theatre in the City of …unfortunately, because of the Film Noir Foundation’s steadfast reluctance to move it closer to my neck of the woods here in the I will not be able to attend.  But Facebook chum, World O’Crap blogger and TDOY mentor Scott C. is standing right outside at the Apollo’s box office as I type, and if he’s able to score tickets he generously agreed to write up a guest review here for us at the blog.  In the meantime, we’ll have something from our guest-reviewer-in-residence (the Honorable Philip Schweier) tomorrow, so you’ll definitely want to stick around for that. 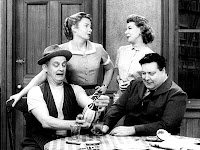 Finally, a Facebook friend who asked not to be identified (she’s up for a promotion, and it wouldn’t benefit her career to associate with unsavory elements such as myself, what with that whole Cub Scout thing and all) was good enough to remind me earlier this past Monday that my fiancée, Me-TV, has put The Honeymooners back on their regular schedule (the change was effective on April 16)…enormously good news for yours truly, as his evenings are rarely complete (and you can check my Twitter feed if you don’t believe me) without The Great One at 10:30, followed by The Twilight Zone at 11 and Perry Mason at 11:30 afterward.  Me-TV is showing “The Original 39” in the slot while relegating “The Lost Episodes” to weekdays (and Sundays) at .  They’ve had to shift a few programs around and say temporary au revoirs to a few (adios, Gomer) so if you’re curious as to what kind of cosmetic work they’ve had done you can check out the revised schedule here (they’ve also added a few classic Saturday morning titles for the benefit of “Mr. Saturday Morning” himself, hobbyfan).
Posted by Ivan G Shreve Jr at 4:30 PM

I don't mind associating with dissident lying Cub Scout rabble rousers. My Cub Scout troop moved without me, and told me (and a bunch of other members from the two old troops that were shut down) not to follow. I always thought that Jacob Cohen - the man who stole his stage name from the Jack Benny Show (Rodney Dangerfield) - could have done something with the story of a kid whose Cub Scout troop left him. And I was just a year from getting my Mountie hat too.

Ivan is going to hate me, but I really enjoyed the new Three Stooges movie, much more than I thought I would. There are some genuine, hearty belly laughs to be found here.

Me-TV's SatAM block starts at the unholy hour of 5 AM (ET). Not only that, but He-Man & She-Ra are still also on RTV, one episode each, from 10-11, and there's no indication that'll change anytime soon. I'd rather they cut Green Screen to an hour and move Gumby & Magoo to 8-9 instead of 5-6. They used to have Green Screen for 3 hours, but I see that's no longer the case.

I've seen The Rebel, and what sucks is that they can't use the Johnny Cash theme on these prints. I'm begging them to pony some coin up to get it right!

I've heard from a heartbreaking number of people on Twitter that the Three Stooges movie isn't completely awful. The trailer looked terrible though, and my general rule of thumb is if they can't make the trailer look good then there is no point watching the film.

I was in the Brownies and never made it to Girl Scouts, having been nudged gently out the door. We went to a paint your own pottery studio and I chose a glaze called Devil's Somethingorother which was a lovely blue with these red bits that expanded into tie-dye looking spots when the piece was fired in a kiln. This was 1978-ish so tie-dye was ostensibly still in. Anyway, the Brownie supervisors were so upset by my choice of the Devil's Somethingorother I was basically kicked out.

I've been a rebel my entire life, even when I never intended it.

Ivan is going to hate me, but I really enjoyed the new Three Stooges movie, much more than I thought I would.

You were right, Kev. I do hate you. And my Mom says I can't play at your house anymore. :-)

Brent found that confession is good for the soul:

My Cub Scout troop moved without me, and told me (and a bunch of other members from the two old troops that were shut down) not to follow.

I was in the Brownies and never made it to Girl Scouts, having been nudged gently out the door.

I've heard from two other people telling me their stories of Boy Scout woe (one of whom is a blogger, and the other who is not). Perhaps we owe a debt of gratitude to the BSA for creating the hostile atmosphere that led people into becoming bloggers like us. (Crowd transforms into a mob) Hey! I was only kidding! Heh heh...