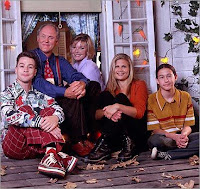 Yeah, just a reminder to the TDOY faithful that if you want to get in on the blog’s giveaway of a free copy of 3rd Rock from the Sun: The Complete Third Season box set you need to dash off an e-mail (with “3rd Rock Giveaway” in the subject header) to yours truly with your name, address and e-mail to igsjrotr(at)gmail(dot)com before 11:59pm EDT this Sunday (April 29) for your chance to win so you can hug it and pet it and squeeze it and call it George.  I’ll draw a winner Monday morning via Random.org and make all the necessary arrangements to get the victor’s prize out to them with all deliberate speed.  (And be sure to stop by here on Sunday—because there’s another contest containing free swag in the works as well.)

If you’re in the neighborhood of Classic Movies today, you might notice that a certain nostalgia blogger was asked to contribute some links of interest to wrap up a week of “guest hosts”—I just wanted to thank K.C. for extending the invitation (she did so at greater personal risk to her reputation—they’ve taken away her library card, for starters) and for the nice words she had for TDOY.  I’d also like to use this portion of the blog to announce that K.C. will be hosting her very first blogathon from June 1-3 (so please…be gentle) and that the subject for that ‘thon will be none other than Mary Pickford herself.  It’s a great topic for blogging (particularly since Mary P. has been in the news lately) and I’ve already signed on for the event…which will allow me to unwrap my DVD of Stella Maris (1918).  If you’re interested in participating (and why wouldn’t you be?) cha-cha on over and leave a K.C. a little “I’m in!” in the comments section of the post.

I mentioned on the blog a good while back about the Kickstarter project instituted by Sam Nelson, son of Rick and grandson of Ozzie & Harriet…who was asking interested people to contribute to a fund that will start the ball rolling on restoring and bringing all fourteen seasons of the television sitcom classic The Adventures of Ozzie & Harriet to DVD.  Like the PBS pledge breaks that are on every week (okay, I am joking about this but honest to my grandma it seems like they are) there were different levels of contributions and because I turned the couches upside down here at Rancho Yesteryear for coinage one of the incentives in the pledge I made was an Ozzie & Harriet T-shirt…which is being modeled by mi madre in the photo at the left.  (The camera loves her.)

It’s been a while since we had any classic TV announcements here on the blog so I thought I’d finish off the checklist with some vintage tube-on-DVD news, starting with an item that I’m sure will attract the attention of oft-TDOY commenter Randy Johnson.  According to TVShowsOnDVD.com, Timeless Media Group is planning to release the classic TV western Yancy Derringer to disc on August 7th in a 4-DVD collection containing all thirty-four episodes of the series starring Jock Mahoney as the foppish N’awlins aristocrat who is in reality a special agent dedicated to riding herd and maintaining law and order.  His Indian sidekick, Pahoo-Ka-Ta-Wah (X Brands), helps him in the good fight despite only being able to communicate with Yance through hand gestures (he lets the shotgun he totes do the talking, I believe).  Derringer only lasted a single season on CBS (1958-59) but is fondly remembered by many classic TV western fans (including my Mom), so kudos to Timeless for scouring the vaults and making this one available.

Also on Timeless’ release schedule is a collection that I am definitely going to have to pony up for in 87th Precinct, the classic crime drama based on the popular pulp novels by Ed McBain (aka Evan Hunter).  This is another series that unfortunately only lasted a single season (1961-62 on NBC) but it’s fondly remembered by many crime and mystery fans and starred Robert Lansing, Ron Harper, Gregory Walcott and Norman Fell.  Precinct will be released in a 6-DVD set containing all thirty episodes and its street date is the same as the Derringer collection, August 7.

CBS DVD-Paramount has more crime drama classics in store for TV fans coming this July 3rd.  First…the good news.  Season 7 of the seminal private eye series Mannix will be released on that date, in a 6-DVD collection containing all twenty-four episodes (from the 1973-74 season) starring Mike Connors and Gail Fisher (and occasionally Robert Reed).  I'm still kicking myself for making the decision not to continue collecting this show; I bought the first season DVD but soon after sacrificed it in The Great DVD Purge of 2007. 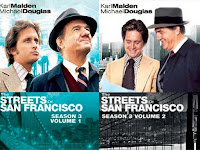 Now…the bad news.  The company will also release Season 3 of The Streets of San Francisco on the same date—and yes, I know this is positive news in some respects (particularly since the word on those streets was that Paramount was ready to drop this one like a bad habit due to the sluggish sales) but the release is going to be one of those furshlugginer split-season deals.  I know, I know—my constant kvetching about this is probably driving you to distraction…but I cannot comprehend how a program like Mannix—which telecast 24 episodes in its 7th season—escaped the split season curse and —twenty-three episodes in Season 3—did not.  Anyway—if you’re interested, both volumes (1 and 2) of Season 3 will be available on the same date (July 3). 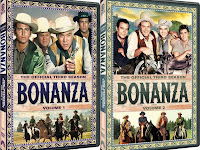 The company is also going to make both split season volumes of Bonanza’s third season available on the same date two weeks later on July 17.  Or as TSOD’s David Lambert notes: “These will be available in stores both separately (for fans who can't afford it all at once), and in a shrinkwrap bundle two-pack (for fans who can't wait to get the entire season as quickly as possible!)”  (You see—they’re just trying to do what’s best for everybody.)  Volume 1 will contain eighteen episodes on five DVDs, and Volume 2 the remaining 16 episodes on 4 discs (plus “special features,” it says in the release). 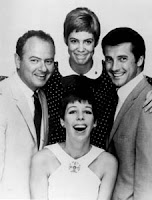 TSOD also has an article up announcing an upcoming release of The Carol Burnett Show to DVD in four—count ‘em, four different incarnations.  A 20-disc box set entitled The Carol Burnett Show: The Ultimate Collection will be released containing fifty telecasts and “ten hours of new, never-before-seen bonus features.”  (I’m guessing the reason why they’ve nixed the idea of season-by-season sets is due to that old copyright bugaboo.)  If you liked the show but are looking for something not quite as pricy, a collection of 18 episodes will be made available (in a 6-disc set) entitled The Carol Burnett Show: Carol’s Favorites.  Stingier individuals might want to invest in The Best of the Carol Burnett Show, a 2-DVD collection containing six episodes from the variety series…and if you never really understood why the show was so popular there’s a single DVD available (also entitled The Best of the Carol Burnett Show) that contains mostly sketches (the Gone With the Wind parody, etc.).  All four of these DVD incarnations are going to be put out by Time-Life on September 25.

In the cold-cereal-and-footy-pajamas department, a company called Film Chest has plans to release all seventeen episodes of the Saturday morning favorite Lancelot Link, Secret Chimp to DVD May 29th…in a 3-disc set whose content was culled from ABC’s original broadcast masters.  These programs (apparently there’s some confusion on just how many shows the series produced, with some sources stating 22) will also contain the music video segments from the group “The Evolution Revolution Band”—but it doesn’t mention anything about the cartoon segments that were originally on the series that featured Daffy Duck and Pepe le Pew.  No one I have ever discussed this show with remembers them…so it’s possible I may be making that up but I could have sworn they were part of the program when it premiered in the 1970-71 season.  To be honest, I wasn’t a fan of Lancelot Link (and the last time I revisited it became painfully obvious why) but the show is loved by others than myself, so it’s nice that they’ll get the opportunity to collect it.

In the “I-can’t-believe-this-is-coming-to-DVD” department, Olive Films has announced that they will release a 2-disc set containing all five—count ‘em, five—episodes of Casablanca…the 1983 TV series starring David “Hutch” Soul as the café owner made immortal by Humphrey Bogart in the 1942 film.  Well…with the 70th anniversary of the movie at the apex of its hype, it probably seems like a savvy business decision to release this now.  I never watched the show (and from the number of episodes telecast it would appear I probably wouldn’t have had time) and I think it might be because I was skeptical as to how the producers would keep Ilsa from getting on that plane every week.  (Okay, I am kidding about this.)  As wacky as a regular Casablanca series sounds, this is actually not the first time the TV industry tried this—there was a boob tube version of the movie that ran briefly during the 1955-56 season as part of the Warner Brothers Presents anthology (the show that eventually gave us Clint Walker’s Cheyenne) starring TDOY fave Charles McGraw as Rick Blaine.  (The first episode of that was made available on a previous DVD release of the movie several years back.) 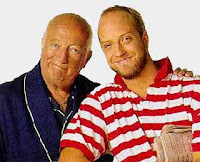 Finally, since we’ve had one or two people wish for such an occasion—this TSOD blurb mentions that in a recent chatty exchange with The Onion’s A.V. Club, actor-comedian Chris Elliott revealed that plans are being made to release his short-lived 1990-92 sitcom Get a Life to DVD sometime in the fall, courtesy of Shout! Factory.  (Yeah, I know this is a little out of my bailiwick, but I wanted to end this post on a positive note.)
Posted by Ivan G Shreve Jr at 12:30 PM

Thanks for the plug. I've already been e-mailed a link for the blogathon, and she said you sent me. Nice work! Thanks for guest linking too. Fun times.

Wow. Go Olive Films! They're really putting out some esoteric, nutty things, and god bless 'em for it.

Just had to say Mannix has one of the greatest theme songs/music ever in TV. Also, I find it troubling that they can't release a complete box set of all of The Carol Burnett Show episodes--that's a bummer!