I don’t really have a lot of items to make up a checklist today—but there were one or two things that I thought needed to be brought to everyone’s attention.  Kristen at Journeys in Classic Film requested in the comments section of a previous “Checklist” post that I plug her Universal Backlot Blogathon, which will get underway from September 14-16.  (Honestly—I didn’t mean to slight her, it’s just that I didn’t find out about it until sometime after I finished the original post.)  She has also asked us to remain quiet and in our seats, and when she finishes the announcement there’ll be punch and cookies: 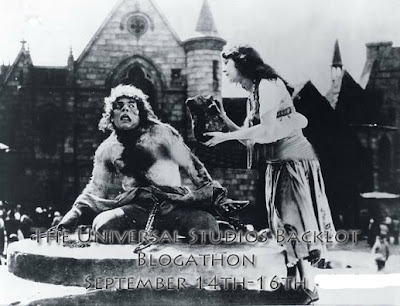 I’m a huge fan of Universal Studios and their backlot tour.  It’s one of the most popular backlot studio tours in the world where movies are made everyday!  In fact films have been made their since the silent era so there’s a lot of history associated with the backlot.  Starting September 14th and running through the 16th, this blogathon will salute this studio tour.  Have a review of a film that used the backlot (either completely or just for a scene counts)?  Interested in the history of the site?  As long as it pertains to Universal Studios Hollywood and the backlot it counts!  You can comment below to sign up or email me at journeysinclassicfilm (at) gmail.com.  Don’t worry if you don’t have a topic right now, I’ll place a formal call for topics about a month before the blogathon.  Also, if you don’t have a blog that’s okay, I’m willing to host your post!

Specifically, here is the complete list of films that have used Universal Studios backlot if you’re looking for a specific film (thanks to Andrew for sending me this).  The Studio Tour also includes information the history of the studio (I’ll be interested to see if anyone writes on the haunted areas of the studio).  There’s a lot that’s happened there and that’s a great resource.

Sadly, Thrilling Days of Yesteryear is going to have to sit this one out…simply because I have too much on my plate right now, including commitments to other blogathons scheduled around that time.  But I’m definitely curious to read everyone else’s input…and of course, if you’re interested in participating be sure to give Kristen a shout-out.

TVShowsonDVD.com has announced that Sony Home Entertainment is going to release the first season of the TV oater The Iron Horse (or as its also known, Iron Horse) to DVD through its MOD program with Amazon.com and the Warner Archive.  Antenna TV viewers know that the 1966-68 western is currently shown on Saturday mornings at 8am and stars Dale Robertson (or as my father derisively refers to him, “Dale Roberts,” whenever he feels the need to get the silent treatment from his first wife) as a gambler who wins a railroad line that isn’t quite yet completed…and so he enlists the help of Gary Collins and Robert Random to pitch in, along with an actress who called herself Ellen MacRae at the time before changing her name to Ellen Burstyn.  The set will be out on October 2nd but the details on pricing and the number of discs in the collection is still a little murky—the first season had thirty episodes (with the truncated second season seventeen) if that helps any.
Posted by Ivan G Shreve Jr at 3:30 PM

Haha, didn't feel slighted at all! I definitely appreciate the shout-out! Thanks a bunch!