Our next serial presentation…and a fabulous prize! 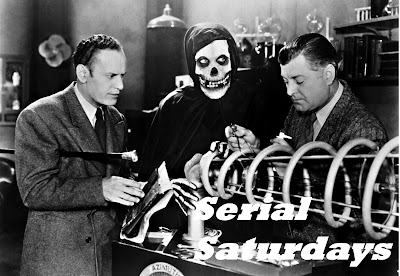 In two weeks, I’ll feature the penultimate and last chapters (one per week) of Adventures of Sir Galahad on Serial Saturdays…and then it will be time to pick another chapter play at which to poke merciless fun.  I’ve narrowed it down to three candidates.

Nominee #1 is a fifteen-chapter serial from entitled Jungle Raiders (1945)…but I need to give you the pros and cons on this one.  The major con is that Eddie Quillan, whom I loathed and despised as the painfully unfunny comedy relief Chuck Kelly in Jungle Queen (oddly enough, released the same year), is in this one as the painfully unfunny comedy relief Joe Riley.  The misery that was Jungle Queen was compounded by Qullan’s presence, and that serial was only thirteen chapters—I’d have to put up with him for two extra installments.

Also, despite its title, Jungle Raiders features very little jungle.  Ed Hulse, Facebook friend and editor of Blood ‘n’ Thunder, says that because the title was probably pre-sold before the script was actually written; its shooting location ended up in the decidedly non-tropical environs of Lone Pine’s Alabama Hills.  (Because of the rapidity of the shooting schedules for most serials, Ed suggests that might be why they assigned this one to director Lesley Selander—Selander was at the helm of a couple dozen Hopalong Cassidy westerns and knew the territory better than anyone.)

The major plus for Jungle Raiders is its cast.  Kane Richmond plays the hero in this one, and my pal Laughing Gravy of In the Balcony fame says it’s “a rare three-babe serial: one good, one bad, and one totally rotten.”  (“The worse they are, the more beautiful, and the totally rotten one dresses like Dorothy Lamour.”)  One of the women is TDOY fave Veda Ann Borg, who, according to serials scholar Hans J. Wollstein, commits an impressive act of grand larceny by stealing most of the proceedings.  (Veda’s villainous boyfriend in this one is played by Charles King, currently being featured in Galahad as comic relief Sir Bors.)  Budd Buster, aka “Jungle Jack” from Jungle Queen is also in the cast, as well as Janet Shaw, Carol Hughes, Jack Ingram and I. Stanford Jolley.  (But despite the presence of those thesps, this may end up being a tough slog.)

Our second nominee is an unusual serial from 1944: The Desert Hawk, a chapter play that I mistakenly forgot to mention when I talked about the scarcity of swashbuckling serials throughout cinematic history in the first chapter of Galahad.  Gilbert Roland—an unlikely candidate to star in a cliffhanger, though he stepped in when Columbia western star James Ellison was injured in an accident during production—plays a dual role in twin brothers Kasim and Hassan.  Hassan is the evil brother who deposes Kasim and usurps his throne, prompting Kas to disguise himself as the titular character to try and retrieve his birthright.

I’m leaning toward this one because author Daniel J. Neyer gives it high marks in “Dissed and Dismissed: Ten Underrated Serials”—which is a chapter in Ed’s book Blood ‘n’ Thunder’s Cliffhanger Classics, a compilation of previous articles from that magazine.  Neyer names two serials on his list that I’ve already covered here on the blog, G-Men Never Forget and The Green Hornet, plus an additional seven entries that are sometimes short-shrifted by cliffhanger fans.  (To be honest, the entire Cliffhanger Classics book is worth both a purchase and your time; I scored a copy of it during a “water sale” at Ed’s a few months ago.)

Also appearing in Hawk are usual suspects Jolley, Ben Welden (in a change-of-pace role from his usual dese-dem-dose gangsters), Kenneth MacDonald, Frank Lackteen and Egon Brecher.  And if that doesn’t sway you…Charles Middleton’s in this one, too.  (The leading lady is Argentine actress Mona Maris.)

The third and last candidate is Don Winslow of the Navy (1942)—a serial that I actually wrote about at the ol’ Salon Blog neighborhood, though I didn’t do a weekly chapter-by-chapter write-up.  Hermitage Hill Media, a first-rate company that releases first-rate versions of serials (they recently put out on disc the surviving six chapters of the 1933 “lost” chapter play Clancy of the Mounted), has a very nice print of Winslow for sale…and it was a definite improvement over my old Oldies.com copy, where the only way I could tell the good guys from the bad guys was that the heroes were wearing Navy whites.

Based on the popular comic strip by Frank V. Martinek (which also had a brief run on radio as well), Don Winslow has a reputation among a few serial fans as being a really good Universal entry; you’ve also got on hand Anne Nagel and Wade Boteler from Green Hornet, as well as Don Terry, Walter Sande, John Litel, Claire Dodd and Kurt Klatch as the villainous Scorpion.  If I do go with this one, it means that I can also schedule the sequel—Don Winslow of the Coast Guard—for a future Serial Saturdays berth.

So here’s the way I’ll do it—in the upper right of the blog is a poll where you can vote on which serial you’d like to see me tackle next.  In the case of a tie…well, I haven’t thought quite far ahead yet, but I’m sure I’ll come up with something.  In the meantime—BBFF Stacia is still kickin’ it with The Phantom Creeps over at She Blogged by Night, and James Vance has just wrapped up the Republic classic cliffhanger Dick Tracy Returns at Shadow Cabaret.  (James was very nice to acknowledge TDOY as his inspiration for tackling Returns in the post for the last chapter…and if I’ve played any small role in corrupting a new generation with snarky serial commentary, I only hope the presiding judge will grant me clemency.)

Speaking of Dick Tracy Returns (oh, I can’t believe how smooth these segueways go)—here is an important announcement!

VCI Entertainment has just released a brand-spanking-new two-disc edition of the first Dick Tracy serial (which first hit theater screens in 1937), which the company has spiffied up considerably for its 75th anniversary.  The chapter play, which is in the public domain (you can probably start watching it on YouTube right now but then you’ll miss the big announcement…and there may be a test on this material), is very hard to find in a really good print but VCI has obtained a first-rate transfer…and just released the new edition of the production this week.

But VCI has also previously released the three sequels in the Republic Tracy franchise: the aforementioned Dick Tracy Returns, followed by Dick Tracy’s G-Men and Dick Tracy vs. Crime Inc.  Serial fans engage in lively debates as to which is the best (well, there's not much argument that the first one is probably the weakest)…but they’re all in agreement that all four serials provide unbeatable entertainment for cliffhanger crazies.  VCI has made available in tandem with the Dick Tracy 75th Anniversary Edition a box set, Dick Tracy: The Complete Serial Collection, containing all four serials: a total of sixty thrill-a-minute chapters on eight discs.

The good folks at VCI were nice enough to send me a copy of this honkin’ big box set…which I would be privileged and pleased to pass along to some lucky member of the TDOY faithful.  (Or even not-so-faithful, as long as you live in the U.S. or Canada.)  All you have to do is send me an e-mail at igsjrotr@gmail.com with “Dick Tracy Giveaway” in the subject header, and make sure you do so before next Sunday (December 2).  Monday morning (Dec. 3), I’ll draw a lucky winner via Random.org and get that person’s prize out to them tuit suite.  If you want to include your snail-mail address in your entry to facilitate quicker delivery, that’s okay-fine…if you’d rather wait until your name has been officially picked (should you win), that's copacetic with me, too.  At a value of $39.99, this is a sensationally cool prize, cartooners—not only do you get all four Dick Tracy serials but there’s also some nifty extras…including the classic Command Performance radio broadcast from February 15, 1945 (“Dick Tracy in B-Flat”) and an episode from the 50s TV series.  But you cannot win if you do not enter.  (Believe me…I have tried, and it does not work.)  So get your entries in (one per household, please) for a chance to get a gift that will fit perfectly on your DVD shelf…or if you’re giving it as a Christmas gift, someone else’s shelf.  Enter today!
Posted by Ivan G Shreve Jr at 10:00 AM

Great post, Ives!
I think I'd enjoy The Desert Hawk. Interesting subject and I'm a huge fan of that dashing Gilbert Roland.

I hope you're having a great weekend.
Page

As you know, Bob, my Firefox doesn't display anything on your sidebar anymore, ever since I lost control of an add-on while on TDoY. So I tried to use IE for your poll and it just yelled at me and sulked, so I'm voting in comments and you can't stop me.

Let the record show that while this is perfectly acceptable (in case anyone out there is having similar problems), I will not count the provisional ballots until the polls have officially closed.

Just don't take as long as Florida or Arizona in counting those provisional ballots!

Since the polls so far show The Desert Hawk in the lead, I'd like to second the nomination of Don Winslow for 2016 (or possibly sooner). :)

If you'd like to cast a vote, Anonymous One -- please feel free to do so! Sorry about having to restrict the contest, though...I'm just a poor blogger.

Nah, it's the one that Blogger supplies...sorry about the trouble you're having with the poll -- I will mark your ballot as "provisional" as well.