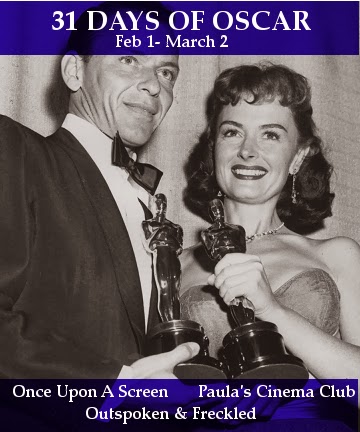 This essay is Thrilling Days of Yesteryear’s entry in the 31 Days of Oscar Blogathon, now underway from February 1 through March 2 (and inspired by the annual event observed by The Greatest Cable Channel Known to Mankind™) and sponsored by Paula of Paula’s Cinema Club, Kellee of Outspoken & Freckled, and Aurora of Once Upon a Screen. 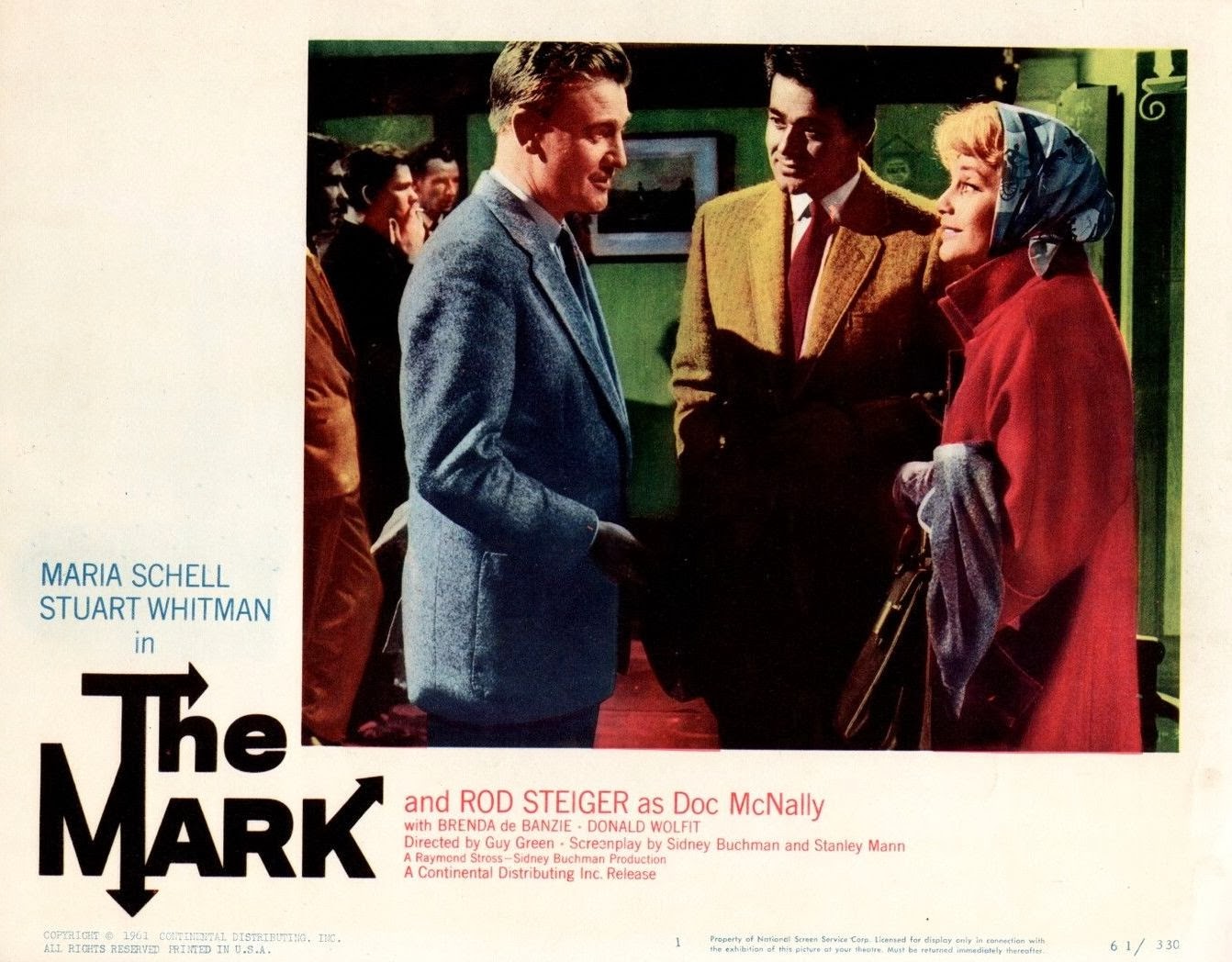 Actor Stuart Whitman celebrated his eighty-sixth birthday on the first day of this month—just in time to see the 31 Days of Oscar Blogathon kick off in high gear.  In the 1960s, Whitman established a solid acting career as a dependable leading man in such films as Murder, Inc. (1960), The Comancheros (1961—with John Wayne), The Longest Day (1962—also with The Duke), Rio Conchos (1964) and Those Magnificent Men in Their Flying Machines (1965).  From 1967 to 1968, Stuart starred in the ninety-minute TV western Cimarron Strip, a series that developed a cult following and was a Saturday morning staple on Encore Westerns a few years ago.  (Whitman also played Jonathan Kent, the adoptive father of young Clark Kent on the 1988-92 syndicated boob tube program Superboy.)

Stuart Whitman’s finest hour on the silver screen was rewarded with an Academy Award nomination for Best Actor—in the 1961 drama The Mark, adapted from the novel by Charles E. Israel.  Whitman plays James Fontaine; an ex-con just paroled from prison who has changed his last name to Fuller and is just getting acclimated to his new surroundings at the start of the movie.  He rents a room from an elderly couple, the Cartwrights (Brenda de Banzie, Maurice Denham), and reports to work at his new job with a public relations firm run by Andrew Clive (Donald Wolfit).  Fontaine’s gig with the company has been arranged by prison psychiatrist Edmund McNally (Rod Steiger), with whom Jim continues consulting as a condition of his parole; the only other individual aware of Fuller’s prison record is Clive’s secretary, Ruth Leighton (Maria Schell)…though she hasn’t been as fully briefed as her employer.

The audience doesn’t get a full reckoning of what sent Fuller to the joint, either, until about a half-hour in…when it is revealed that Jim was convicted as a sex offender.  This presents a number of problems for the protagonist—chiefly the possibility that his past crime will be exposed.  Complicating all this is that both he and Ruth have entered into a relationship; Ruth is a widow…with a young daughter, Janie (Amanda Black).  Despite his unease in light of his previous conviction, Jim eventually becomes comfortable in Janie’s presence.  He takes the girl to a carnival…and it is there that a tabloid reporter named Austin (Donald Huston) snaps a picture of the two of them—the publication of which sends Jim’s life into a downward spiral.

Whitman regarded his role in The Mark as the most challenging of his career…though if Richard Burton had not been committed to a stage play at the time the film was scheduled to go before the cameras, the title of this essay would be entirely different.  (Whitman speculated in a commentary for the DVD’s release in 2001 that Burton might have arranged to be kept busy in the play because he was nervous about the subject matter.)  Stuart was filming a screen test with Lee Remick when his agent told him to get on a plane for Europe, tuit suite.  The actor hadn’t even had a chance to look at the script (adapted by Stanley Mann and Sidney Buchman, who also co-produced) until he was ensconced in his hotel suite, and after reading it realized it was the acting opportunity of a lifetime. Though The Mark was a 20th Century Fox production, much of the filming was done at Ardmore Studios in Ireland; former cinematographer Guy Green, who had previously won an Oscar for his work on Great Expectations (1946), put Whitman and his fellow thesps through their paces (Green would later go on to helm Light in the Piazza [1962] and A Patch of Blue [1965]).

Actor Whitman later observed that he was grateful the film was shot in Ireland because its isolation (away from the hustle-and-bustle of Hollywood) helped him immeasurably in getting a handle on his demanding performance.  He’s able to convey marvelously the tentativeness of Jim Fuller, a man who despite having paid his debt to society is often uncertain of himself, worried that his release may have been premature.  Whitman makes Fuller a sympathetic individual…though in all fairness, he gets an assist from a slight deviation from the source material; in the novel, Fuller/Fontaine was a pedophile—but in the film, the protagonist is guilty only of kidnapping a minor and attempting sexual assault (he’s able to stop himself from completing the vile deed, but offers no defense at his trial because he realizes he’s sick and needs help).  (For an interesting example of a film that does feature a reformed pedophile as the main character, the 2004 film The Woodsman is worth checking out.)

Despite being the main character, Whitman was second-billed to Maria Schell, who was the more popular star at the time (The Brothers Karamazov, The Hanging Tree, Cimarron)…and ironically, the sister of the actor who won the Best Actor Oscar with which her co-star was competing (that would be Maximilian Schell, who triumphed for Judgment at Nuremberg).  It’s a mystery as to why Maria didn’t also receive Oscar consideration for her fine performance in Mark; her Ruth Leighton is warm and loving, and tenderly supportive of Jim even after she’s been made aware of the newspaper photograph (and the accompanying story, which provides vivid details of Fuller’s previous proclivities).  This support disappears in an instant, however, when daughter Janie, after spending the night at a friend’s house, runs to Jim because she’s happy to see him…and is stopped by Ruth’s startled cry of “Jamie…no!!!”

Matching Whitman’s amazing performance is character great Rod Steiger as Dr. McNally, whose tough love approach to helping Jim Fuller also inspires a fierce sense of loyalty to the recovering ex-con: McNally continually backs Jim up whenever the latter is worried that he should have been kept locked up, and never wavers in his belief that Jim is now capable of functioning in society.  (As McNally so memorably explains to his patient: “I can help you…but I can’t solve your problems.”)  Steiger’s sympathetic turn as McNally is an interesting change-of-pace (Whitman remarks on the DVD commentary that a number of psychiatrists and med students told him they use the McNally character as a primer in dealing with those problems) from the less-than-flattering portrayals of these same professionals on shows like Law & Order: Special Victims Unit.

Many of the supporting actors contribute exemplary performances though admittedly I was familiar with only a few of them, like Donald Wolfit and Maurice Denham; I’m a big fan of Brenda de Banzie, however, and it’s incredible what she accomplishes with the small role of Fuller’s landlady—in the early sections of Mark, she’s almost a surrogate mother (and many of the exchanges between her, Whitman and husband Denham echo similar interactions between Whitman’s character as a child, shown in flashback) until she is made aware of Jim’s past…and then her quick transformation into the woman who coldly orders Fuller out of their home is mesmerizing. 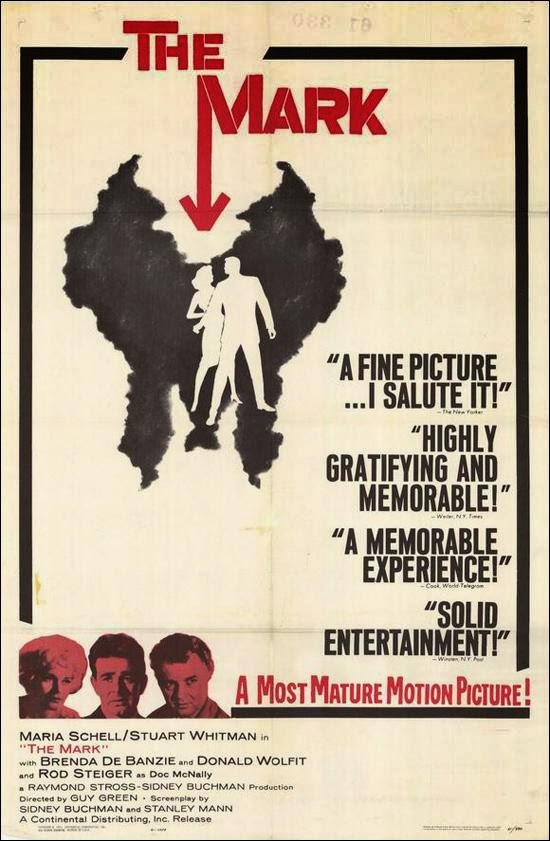 Whitman was told by his fellow actors and others who worked on The Mask that his performance would surely net him an Academy Award nomination; Stuart kept a level head about it all, but was still gobsmacked to be included in the company of Paul Newman (for The Hustler), Schell and Spencer Tracy (Nuremberg), and Charles Boyer (Fanny).  In a less competitive year, the actor might have pulled off an upset; even then, winner Schell told him when showing him his Oscar “This should have been yours”…and explaining to him that he (Whitman) carried his entire picture while Schell’s screen time was somewhat limited.  Schell’s sister Maria wrote Whitman a letter shortly after the nominees were announced, telling him that while she was very fond of him she was completely torn over which actor would get her vote.   Decide for yourself whether or not Stuart could have been “a contendah”; though the VCI DVD is now out-of-print, TCM will air this sleeper on February 21st at 1pm EST.  (Due to mature subject matter, viewer discretion is advised.)
Posted by Ivan G Shreve Jr at 2:30 PM

"The Mark" was one of those movies that I first heard of back in the early 80s, when I saw Whitman's nomination in the Oscar issue of TV Guide.

I'd made it a practice to jot down the names of Oscar-nominated movies I hadn't heard of, and to keep an eye out for them on television. (It wasn't nearly that easy to hunt down these movies in the pre-cable, pre-VCR era.)

I discovered many terrific movies that way - "Tom Jones," "Seance on a Wet Afternoon," "This Sporting Life," "Saturday Night and Sunday Morning," and "Sunday Bloody Sunday" to name a few, and "The Mark" was one of them. Knowing Whitman only from television, it was something of a shock to see him with a Best Actor nomination. Having seen the movie, I can agree that it was well-deserved. He does a fine job with a very difficult role, infusing it with the right amount of empathy. And you're right that Steiger is great in this role as well, really playing against type.

Glad you brought this movie up - it doesn't get as much attention as it should.

I'll have to try to check "The Mark" out sometime. Whitman made some interesting movies back in the early to mid-60s, "Sands of the Kalahari" being one of my favorites.

I'm a big fan of Brenda de Banzie, myself. She was absolutely marvelous as Maggie Hobson.