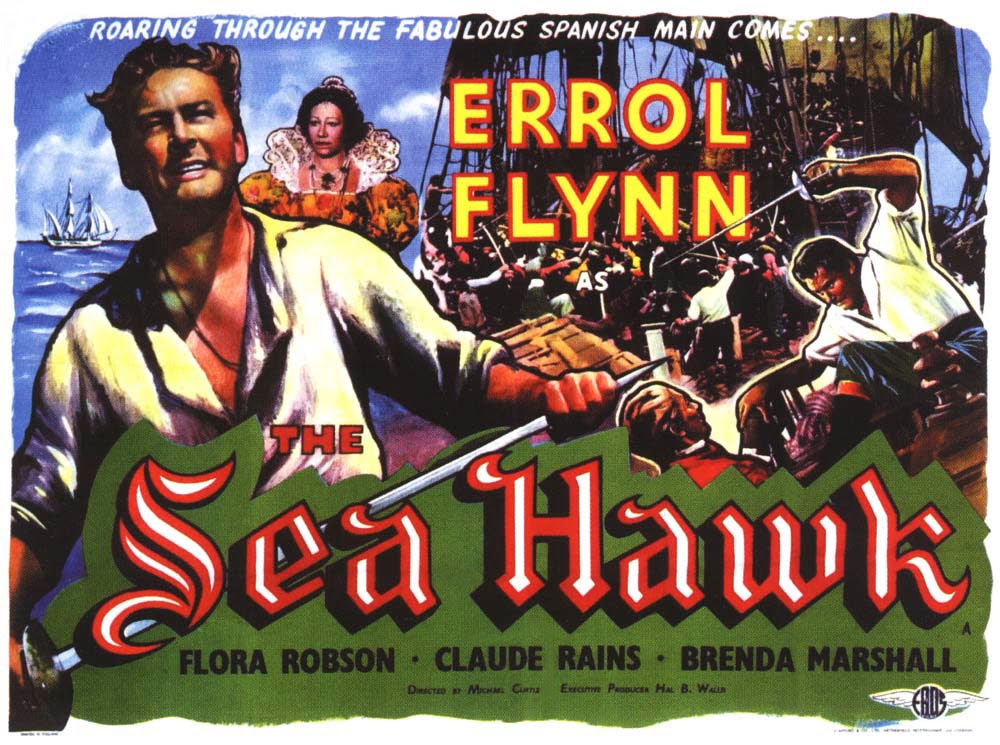 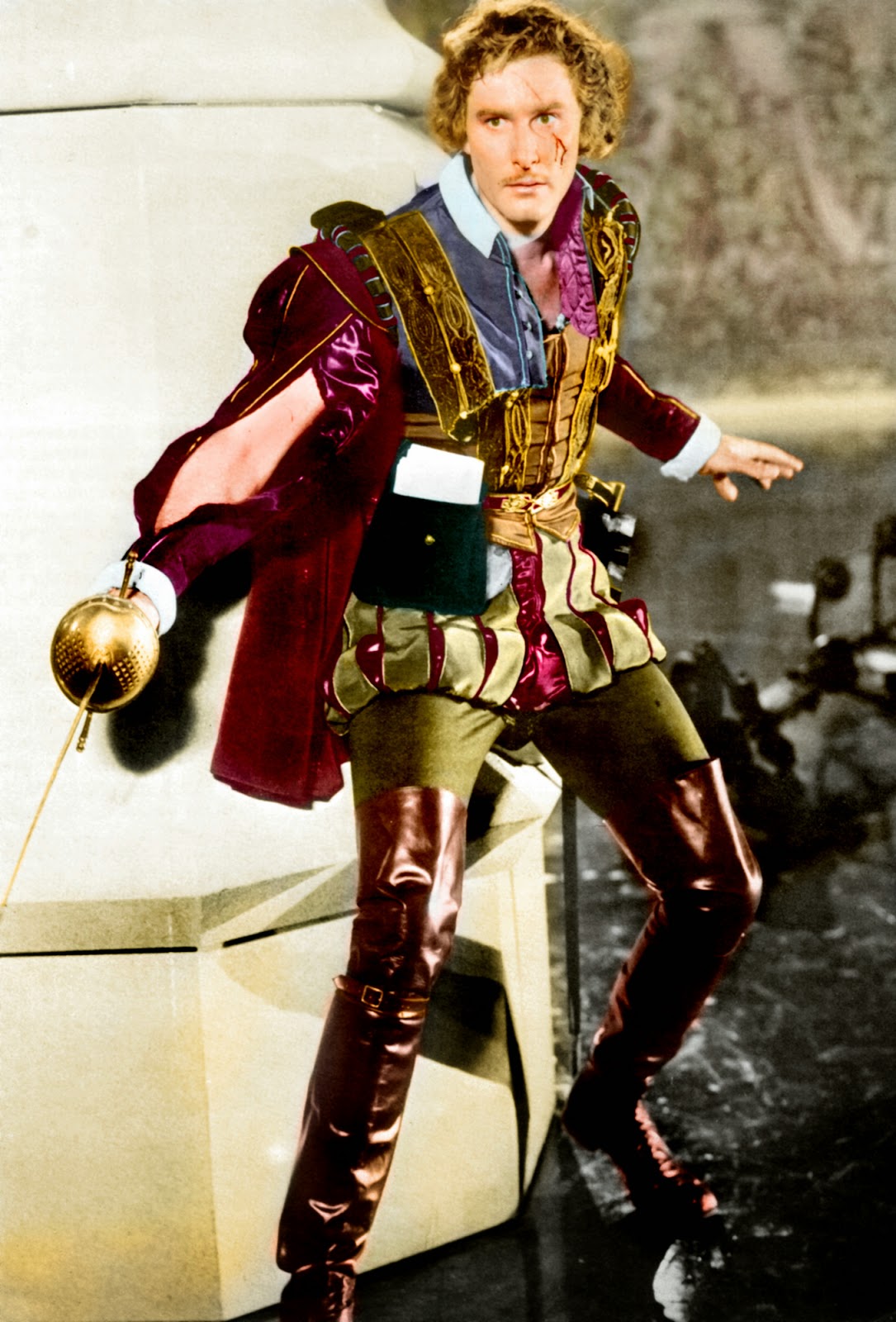 A couple of years back I got a Kindle, and I immediately began filling it with books in the public domain (cuz I’m cheap). Among these were some swashbuckling adventures such as Captain Blood, and keeping Errol Flynn in mind, I also added The Sea Hawk, both books by Raphael Sabatini.

However, I recently got a copy of The Sea Hawk (1940) on DVD, and was surprised to learn the story is nothing like the novel. The movie is instead based on Beggars of the Sea by Seton I. Miller. Sabatini or not, it still makes for an interesting film.

In the aftermath of the success of 1938’s The Adventures of Robin Hood, The Sea Hawk attempted to reunite many of the principals. Michael Curtiz returned to direct, as well as actors Flynn and Claude Rains. Erich Wolfgang Korngold provided music once more. Olivia de Havilland and Basil Rathbone, having been featured opposite Flynn in Captain Blood (1935), chose to pass. 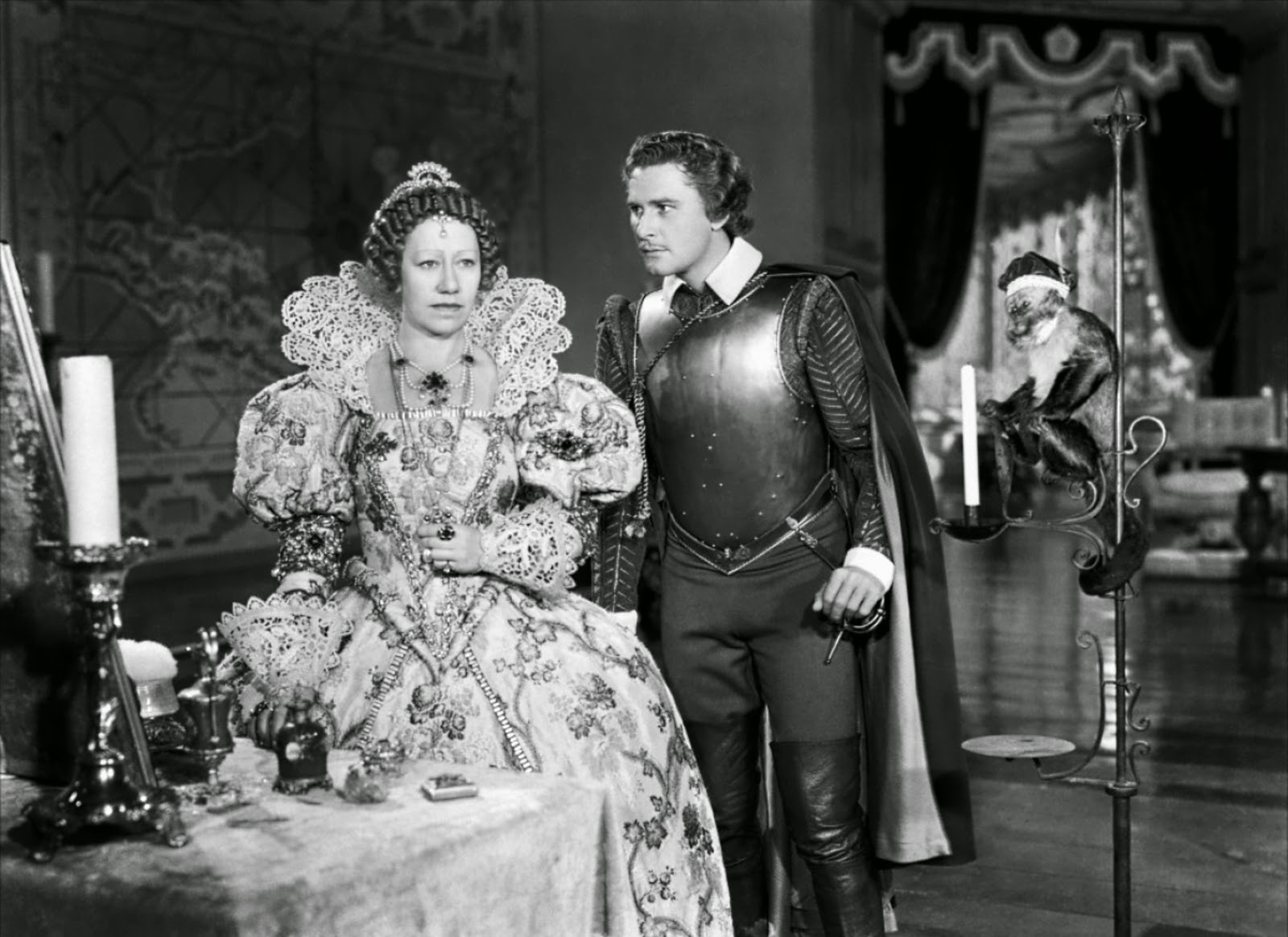 Flynn portrays Capt. Geoffrey Thorpe, a roguish captain whom Queen Elizabeth (Flora Robinson) employs as one of her Sea Hawks, specialized captains who form an elite group of commanders. As Don José Alvarez de Cordoba (Rains) of Spain journeys to England to assume his duties as ambassador, his ship is accosted by Thorpe’s Albatross. Of course the Albatross emerges the victor, and Don José and his niece Dona Maria (Brenda Marshall) are taken aboard to be “escorted” to England. Also taken aboard are a number of English prisoners who had been serving as rowers in the hold of the Spanish ship. Freeing these slaves justifies Thorpe’s attack on a ship flying the flag of a nation with whom England’s relations are tenuous at best. 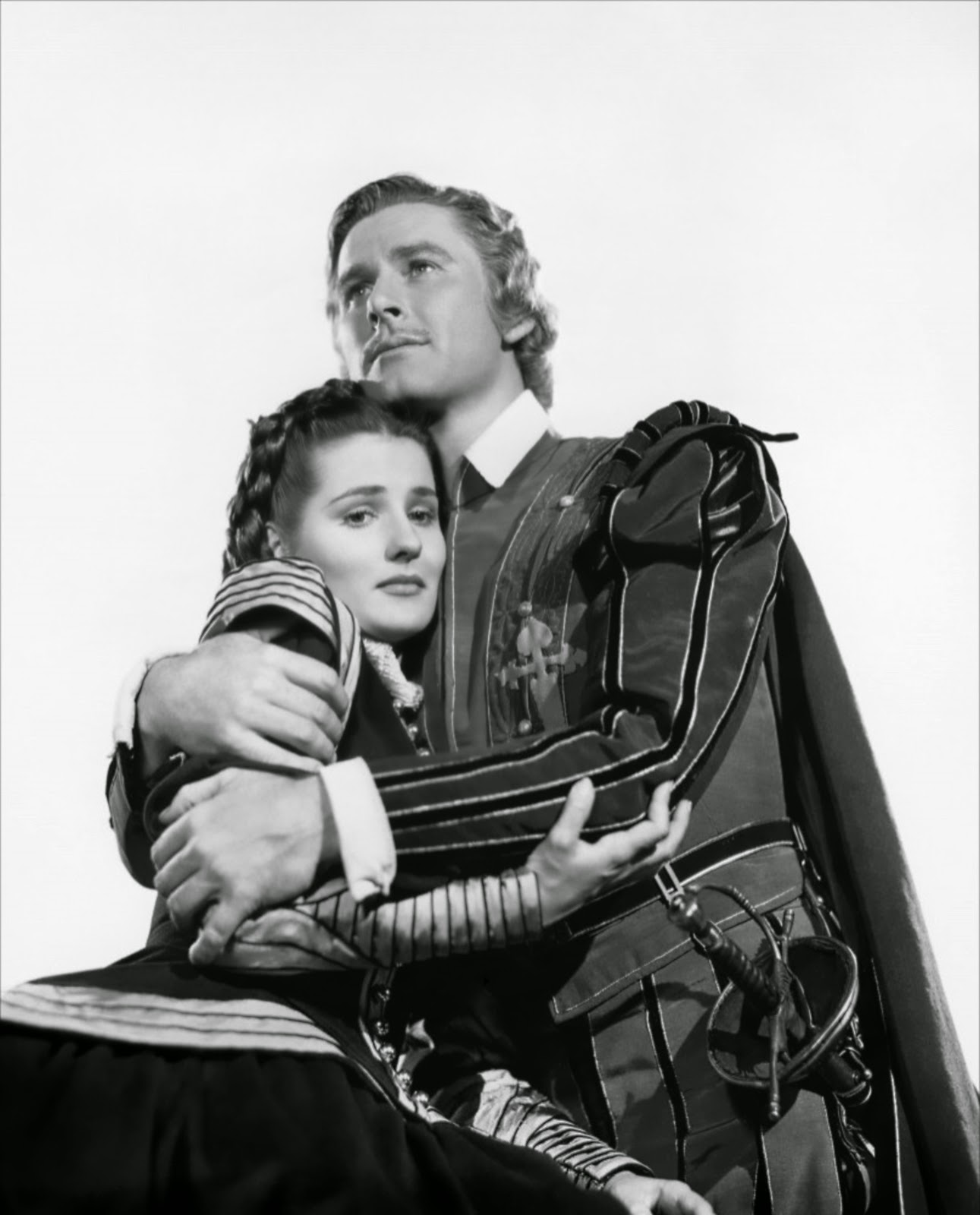 During the voyage to England, Thorpe schmoozes Dona Maria, but she is inclined to give him the cold shoulder. By the time of their arrival, she has thawed somewhat. Nevertheless, the queen’s advisor, Lord Wolfingham (Henry Daniell), is eager to see Thorpe removed. It seems Wolfie is conspiring with Don José to undermine the queen, allowing King Phillip of Spain to conquer England.

In a private audience with the queen, Queen Elizabeth and Captain Thorpe hatch a plan to send the Albatross to Panama, the source of Spanish gold, and hijack as much gold as the ship can manage. All this wealth is intended to finance the development of the British Navy, as a means of defense. But Don Jose and Wolfingham have eyes on Thorpe, and are able to suss out from Thorpe’s chart maker his next objective. They manage to lay a trap for Thorpe and his men, which results in them being chained to oars of a Spanish galleon. 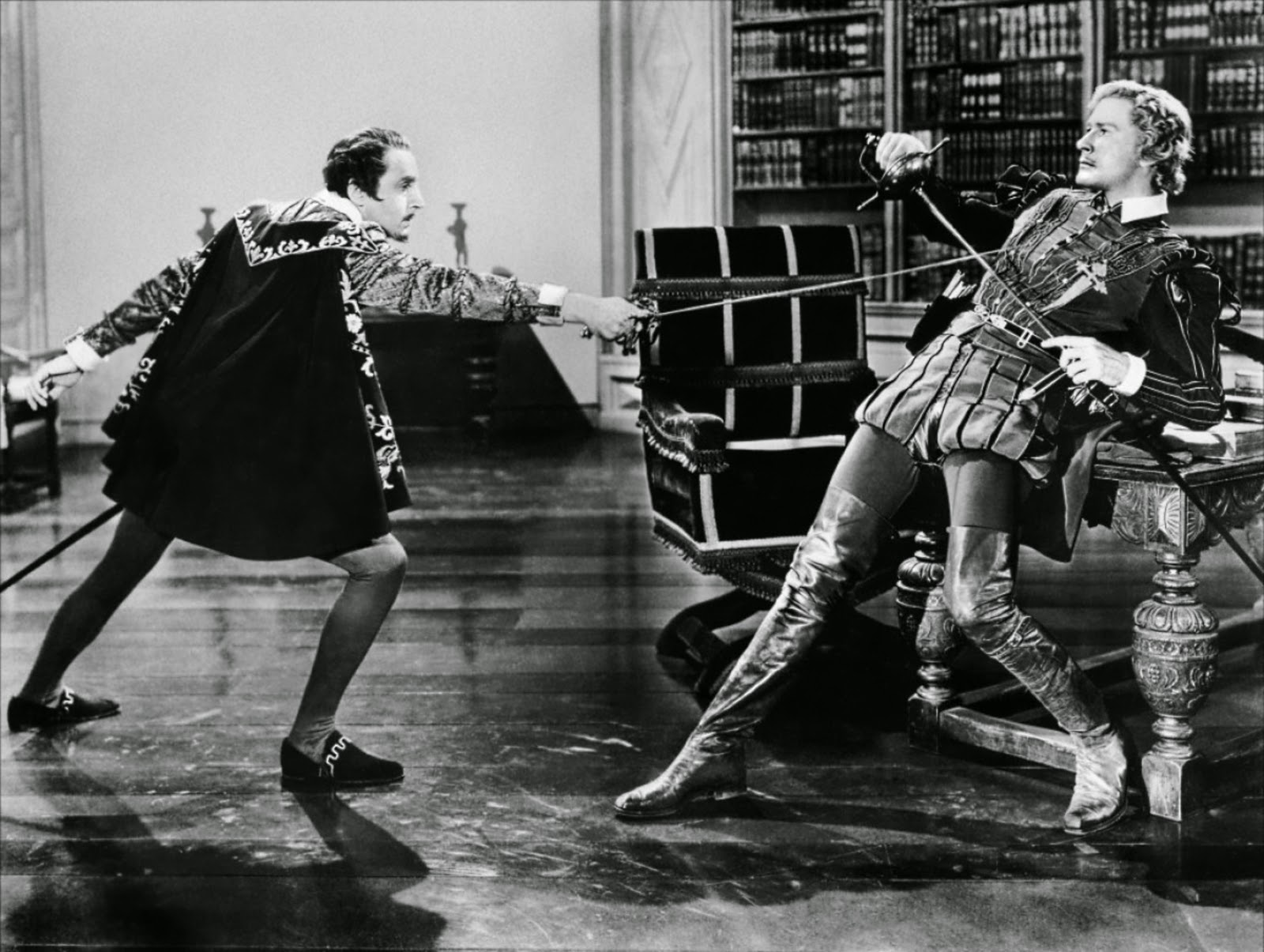 In true swashbuckling fashion, Thorpe is able to lead his men to freedom, and return to England to challenge the traitorous Lord Wolfingham. Dona Maria recognizes the treachery of her uncle, and succumbs to Thorpe’s romantic advances. The film ends with a rousing speech by Queen Elizabeth that, in 1940, could easily have been an allegory to the rising tide of war.

By 1940, some of these adventures had become old hat, especially when starring so many of the same actors. Other veterans from Robin Hood included Alan Hale and Una O’Connor, repeating the same types of roles as before.

The DVD I watched featured a “Warner Bros. Night at the Movies,” which included an intro by Leonard Maltin. I have never cared for Maltin, not since he did movie reviews for Entertainment Tonight back in the late 1970s. He’s always come across as a bit pompous to me, so I skipped the intro. 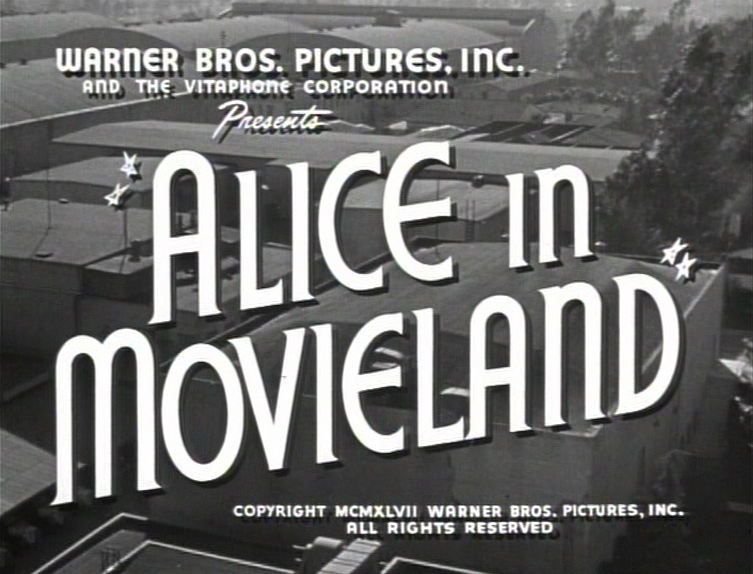 I did watch the newsreel, and the cartoon (a black and white Porky Pig episode). What I really found charming was the short, entitled Alice in Movieland, written by Ed Sullivan (yes, THAT Ed Sullivan). It chronicles the rise of a young contest winner from Nowhere, U.S.A., (played by Joan Leslie) who wins a contest for a trip to Hollywood and the chance to become a star. After bidding good-bye to her town amidst much fanfare, she journeys to Hollywood, where she is met with equal fanfare. She makes the rounds of a number of nightspots before her screen test. The crew is less interested in her, and more in getting another contest winner out the door so they can move onto the next one in time for lunch.

Nothing comes of her screen test, and on the verge of going home, she opens a letter given her by her grandmother (Clara Blandick). “Open it only when you feel you have to come home,” Gramma said. Instead of a train ticket home, Alice finds a letter, encouraging Alice to stick it out despite her frustration. It finishes with the line, “…and if you come home without making it as a star, I’ll wring your neck.” Whoa! Grandma’s showing some tough love. 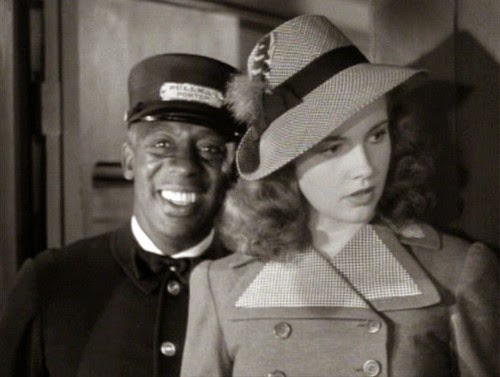 Alice’s stick-to-it-iveness pays off and she soon lands a role as an extra, only to endure the hazing of her more experienced cast mates. Chief among them is the assistant director (played by Martin Burke, who was also featured in The Sea Hawk). She chews him a new one in front of the entire crew, drawing the attention of the director, who immediately puts her on the fast track to fame and fortune. As she collects her Academy Award®, she hears people shouting her name. But it’s only the porter (Clarence Muse) waking her as the train pulls into Los Angeles.

Yes, kids, like most Hollywood fables, it’s all been a dream, but not without its truth. Hopefully, it made one starry-eyed teenager think twice before journeying to Hollywood, only to become another Elizabeth Short (look her up). As for the star of the short, Joan Leslie, she enjoyed steady work in Hollywood, being featured in such films as Sergeant York and Yankee Doodle Dandy. Eventually she moved into television in the 1950s before leaving the business. In the late ‘70s/early ‘80s she returned to small roles on television shows such as The Incredible Hulk and Murder, She Wrote.

I love "The Sea-Hawk", one of my very favourite films, and the one that got me hooked on history as a child. Wonderful score, beautifully filmed, smashing film.

Just a minor quibble: I'd say Maria was already smitten with Thorpe by the time he sailed for Panama. Her attempt to warn him about her father's trap as soon as she learned of it sort of argues for that.

Anyway, Adventures of Robin Hood is fun, no argument there. Gorgeous Technicolor, a great cast and yet another rousing E. W. Korngold score. But somehow it never quite engaged me the way Captain Blood and The Sea Hawk did.

Since I've been fascinated with pirates and sailing ships since I was a young boy, I guess this is pretty understandable. The nautical sets, with their incredible attention to detail, are just one of the reasons I like TSH so much.

But also, more and more, each time I see AoRH, well ... it just looks too damn pretty! And I find myself wincing at stuff like swords that are obviously lighter than steel, don't sound like steel when they clash, and get bent during the swordfights.

Oddly, filming Flynn's two seafaring epics in black-and-white makes them seem more real to me. Especially the tinting they used in TSH for the Panama sequence: that yellowish-sepia tone makes the heat and humidity of the jungle almost palpable. Paired with the awesome, funereal theme Korngold composed for drums and strings, it gives you a near-visceral sympathy for the plight of Thorpe and his men, their misery and weariness as they're hunted through that tropical swamp.

I also think Flynn had matured somewhat as an actor by this point, and gave one of his best performances here. The interplay between Thorpe and Flora Robson's Queen Elizabeth strikes just the right notes.

But de Havilland probably made a good choice in staying out of this one. The character of Maria was too passive to be a good fit with the on-screen persona she'd created by that point. I mean, Marshall could do the haughty and disdainful bit almost as well as de Havilland, but I have a hard time seeing Olivia as the weepy Maria, quietly pining for Thorpe. FWIW, I also think Henry Daniell was a far better choice for Wolfingham than Rathbone would have been, even if he was a lousy fencer.

I think Terry Gilliam must have a certain fondness for this film, too, since The Crimson Permanent Assurance features a brilliant parody of the mutiny-on-the-galley sequence from TSH.

THE SEA HAWK is a very well-made, entertaining film--but I agree that it doesn't compare to THE ADVENTURES OF ROBIN HOOD. And, as you pointed out, it's nothing like the book. WB should have made it in color--Jack Warner was a cheapskate.

The Sea Hawk (1940) is a fantastic Errol Flynn swashbuckler. However, earlier this year TCM ran a silent film The Sea Hawk (1924) which is an actual adaptation of Sabatini's novel of the same name. I highly recommend that version as well, as it was a super-production featuring sea battles with full-sized ships! Some of this footage was recycled into the 1940 Flynn film and may have helped determine the choice to shoot that film in black and white.