“Old Man Depression, you are through—you done us wrong…” 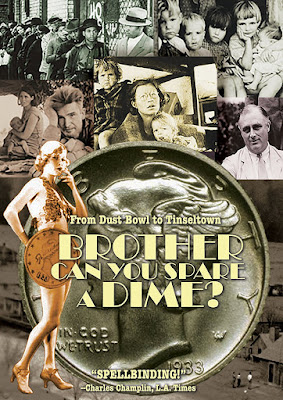 I’ve mentioned a time or two on the ol’ blog that much of my classic movie mania—really, the entire content of Thrilling Days of Yesteryear—sprang forth from the nostalgia craze that swept the 1970s, which played host to my formative years.  Hollywood looked to the past for moviemaking (Hearts of the West, Nickelodeon) and radio stations began rebroadcasting many of the great shows of Radio’s Golden Age like The Shadow and Fibber McGee & Molly.  One of the more interesting features to emerge from that period is Brother Can You Spare a Dime?, a 1975 documentary directed by Philippe Mora and now available on Blu-ray/DVD from the good people at The Sprocket Vault. 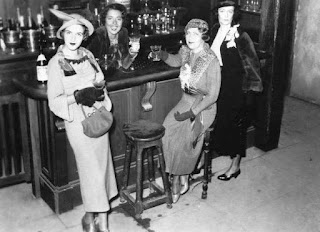 Brother presents a mash-up of clips from classic Hollywood flicks and newsreels in attempt to chronicle the events of The Great Depression…and to be honest, I’m a little hesitant to call the film a documentary because it’s really more of a cinematic mosaic, relying on images, music, and sound bites instead of going the more traditional doc route.  So I’m going to warn you right now: if you’re hungry for something along the lines of a serious Ken Burns-like presentation, you might want to move along because there’s nothing to see here.  But that would be premature (and very, very wrong), because Brother is a lot of fun: it includes a lot of great songs (a couple of classics from Woody Guthrie, not to mention contributions from the likes of Cab Calloway and Billie Holiday) that would make dandy music videos, and it’s most entertaining trying to identify the film clips included in the movie. 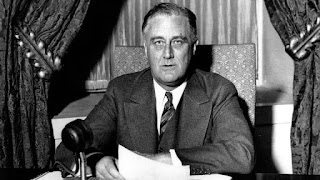 In his 1975 review of Brother Can You Spend a Dime? the late Roger Ebert wrote: “We get a great deal more of Roosevelt than we really need.” Which is kind of silly—FDR was president throughout that era, so it shouldn’t come as a huge surprise that he figures prominently in the movie’s content.  (Now you know why I don’t place Rog on the pedestal that others do.)  Other personalities that turn up in Brother include Huey Long, Joe Louis, John Dillinger, Winston Churchill, and Herbert Hoover along with “more stars than there are in Heaven” via the generous amount of film clips.  (James Cagney gets the lion’s share of these, with nods to vehicles like Taxi! [1932], Lady Killer [1933], and ‘G’ Men [1935], but there’s also footage from TDOY faves like Black Legion [1937—a very effective sequence that blends newsreel footage of the Ku Klux Klan with Bogart’s character’s initiation] and To Be or Not to Be [1942—“Heil myself!”].) 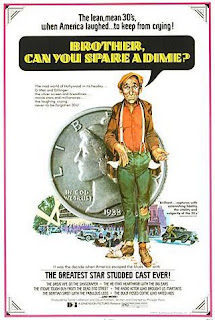 Brother calls it a day once the United States decides to enter WW2 after the attack on Pearl Harbor, and curiously wraps things up with footage of Lee Harvey Oswald and past presidents like Richard Nixon and Gerald Ford.  (Yeah, I didn’t quite understand this either.)  I really think classic movie mavens will enjoy this one, and to sweeten the presentation The Sprocket Vault includes some nice bonus material in the form of fifty minutes of newsreels from Pathe (“On land…on sea…in the air!”).  There’s a lot of great stuff in these time capsules (there’s a notice before the footage that the company is planning future DVD releases of these newsreel compilations), featuring celebrities like George M. Cohan (wowing Broadway in I’d Rather Be Right) and James Stewart (his induction into the service).  The old-time radio fan in me was particularly entertained by the footage of the opening of the NBC Studios at Rockefeller Plaza (a.k.a. “30 Rock”) and a bit with Lucille Ball demonstrating Sonovox (the device used to simulate the “talking train” featured in the Bromo Seltzer commercials of that era).  (I could have done without the footage of “movie czar” Will Hays, though—unless people feel empathy for the charisma-impaired.)

The Sprocket Vault Blu-ray/DVD release of Brother Can You Spare a Dime? has been digitally restored in high definition, and is available exclusively through Amazon.  Many thanks to Kit Parker and his staff for providing TDOY with both the screener and a delightful walk down Memory Lane.

Well, my birthday just passed. Wait! I'm a mother (yeah, two kids) and Mother's Day is just around the corner. Whew. Now I just have to convince folks that they should buy me something. In particular, Brother Can You Spare a Dime.