“I wanna tell ya—I’m thrilled to be here!” 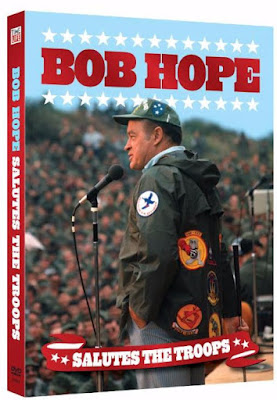 One night in 1973, legendary comedian Bob Hope sneaked into the NBC studios to attend a taping of The Dean Martin Show, where fellow mirthmaker Don Rickles (who we sadly said good bye to this month) was appearing.  The studio audience applauded wildly upon spotting Hope, and when the applause had died down Rickles cracked: “Well, the war must be over.”  Despite a lengthy show business career that encompassed stage, screen, radio and TV, the jokester born Leslie Townes Hope in 1903 established a legacy “performing United Service Organizations (USO) shows to entertain active duty American military personnel (he made 57 tours for the USO between 1941 and 1991),” as referenced at Wikipedia.  I don’t have the quote handy (nor can I give proper attribution, sad to report) but the old joke went something like “It’s not officially a war until Bob Hope shows up.” 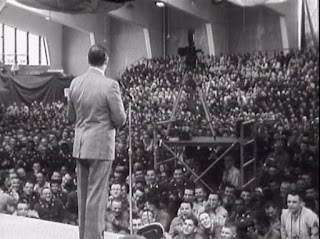 Bob Hope’s dedication to “entertaining the troops” had its origins in radio, when on his May 6, 1941 broadcast he performed at March Field, California.  Hope never wavered from his earnest belief that “GIs are the greatest audiences in the world,” and I take him at his word that he was sincerely enthusiastic about the goodwill that resulted from his many trips overseas.  But a comedian also thrives on being loved and adored, and a complicated man like Bob (once described by his one-time manager Elliott Kozak as “the most self-centered man” he’d ever known) no doubt fed on the approval from what he admittedly referred to as “captive audiences.”  (My comedy idol Fred Allen once joked that his rival “reeked of” self-confidence.)

Hope’s television specials performing on USO shows at Christmas time were always tops in the ratings, and this May 2, Time Life is releasing a three-disc DVD set, Bob Hope Salutes the Troops.  My pal Michael Krause at Foundry Communications was generous enough to send me a screener, which features six telecasts that originally aired between 1963 and 1991.  I should be honest: I had reservations about watching these shows—not due to any political differences (though I can state with confidence that Bob and I have differing views with regards to Vietnam), but because I remember watching the entertainer’s small screen specials in the past and wondering why the man whose movies I adored as a kid (and still do) no longer seemed all that funny.  As author Kliph Nesteroff posits in The Comedians: Drunks, Thieves, Scoundrels, and the History of American Comedy:

By the mid-1960s Hope was one of the wealthiest men in America and one of the largest private landowners in California.  Radio star, television star, movie star—he’d achieved every possible show business goal.  There was nothing left.  And without ambition driving him, the quality of his comedy plummeted.  He was still doing up to six television specials each year, but he was phoning it in.


Despite the questionable quality of his TV work (his dependence on cue cards, uninspired writing, etc.) I found a few nuggets among the dross.  The earliest special on this set is from January 16, 1963, as Bob and his troupe entertain audiences at nearly a dozen military bases in the Pacific.  Lana Turner is the big draw here, dancing the Bossa Nova and trading quips with Hope in a sketch that casts her as a captive in the clutches of an Asian warlord (Bob), but Janis Page is also in Bob’s entourage (she plays a counterculture chick in a WTF sketch with Bob as a bass-playing beatnik), as are singer/future orange juice pitchwoman Anita Bryant and Amedee Chabot—Miss USA at the time.  (Hope’s tendency to feature plenty of females in his shows was later satirized in the “Playboy bunnies” sequence in 1979’s Apocalypse Now.)  Hope’s radio sidekick, “Professor” Jerry Colonna, and Stan Freberg regular Peter Leeds handle much of the comedy along with Bob, with music by Les Brown and His Band of Renown.

I have always admired Les—not just because he began with Hope in his radio days (Les also brought along his band’s female vocalist, Doris Day), but because he was seemingly able to play Thanks for the Memory over and over and over again all those years without getting sick of it.  He figures in a funny exchange with Bob and Lana:

Brown glances at Bob…then glances at Lana…then breaks his baton in two, hands it to Bob, and walks off the stage arm-in-arm with Lana.  Doris Day credits Bob Hope with teaching her everything she knows about comedy, and it’s nice to see Les stuck around for a few classes, too.


A January 15, 1965 telecast is next in the lineup—with Paige, Bryant, Colonna, Leeds and Brown all returning.  (Bryant attempts to seduce a pair of MP’s with You’re Nobody Till Somebody Loves You, which made me chortle considering her later morality crusade.)  Jill St. John, Hope’s co-star in 1967’s Eight on the Lam, leads off the eye candy in this one; there’s even an amusing exchange (and a prescient one) in which Jill answers Bob’s query as to how an intelligent girl like her (she had an I.Q. of 162) could play so many daffy redheads in the movies.  “Isn’t it ridiculous?” Bob asks her.

“Well, you’re still playing romantic leads—aren’t you?” St. John shoots back, echoing a concern many critics noticed at the time.  (St. John returns to make a guest appearance in a January 17, 1972 special; she’s fresh off the set of Diamonds are Forever, the 1971 James Bond film in which she played “Tiffany Case.”)  To me, the star of Hope’s 1965 Christmas special is the madcap Colonna; there are three routines featuring him and Bob in this telecast, all resonant of the splendid work they did during Hope’s radio years.  Bob, doing a monologue, notices that Jerry is reclining on a coach in the audience:

BOB: Pardon me, sir, but—who are you?
JERRY: I’m the base psychiatrist…
(Wild applause from crowd)
BOB: Well, you don’t look like a psychiatrist to me—I have a hunch you’re a fraud!
JERRY: That’s me—Sigmund Fraud!
BOB (to the audience): I think he shrank his own head… (To Colonna) What are you doing on a couch in my audience?
JERRY: Can you think of a better place to sleep?


The Bob Hope Christmas Special: Around the World with the USO (01/16/69) is a great little special, and its appeal can be summed up in two words: Ann-Margret.  (Or is that one word?)  My Dad, not a Hope fan by any measure of the yardstick, has had a thing for Ann for many, many years (he often jokes that they “went to different schools together”) and Ann is entertainment with a capital “E” performing Dancing in the Streets.  My favorite part of this telecast, however, is Bob and The Golddiggers’ rendition of Perfect Gentleman—the show-stopping musical number performed by Jason Robards and Norman Wisdom in one of my favorite movie comedies, The Night They Raided Minsky’s.  Also appearing in this one are Linda Bennett (a one-time child actress who worked with Bob in The Seven Little Foys), ex-football-player-turned- warbler Rosey Grier, Penny Plummer (Miss World), and Honey, Ltd…as well as ol’ reliable Les and his Band.


Despite the approval of Bob’s “Christmas with the Troops” specials with TV audiences, the entertainer eventually found that the unpopularity of the Vietnam War discouraged a lot of entertainers from taking him up on an offer to hit the USO circuit—not to mention his own views on both the controversial conflict and the rise of the counterculture back home.  (Some of the bases began to reject the idea of the comedian performing there, and a 1969 appearance in Long Binh found the crowd of soldiers flipping the cameras the bird and giving power salutes.  None of this was shown on American TV, of course.)  But the celebrity wattage had dimmed a bit by the time The Bob Hope Christmas Special: Around the Globe with the U.S.O. aired on January 17, 1972.  This is the show that Jill St. John makes a guest appearance on, but the lineup includes luminaries such as Don Ho (three guesses as to what he performs—the first two don’t count), baseball’s Vida Blue, and former astronaut Alan Shepard.


It’s fitting that Bob closes his time in Vietnam with a January 17, 1973 telecast that comes to a wow finish with a duet of Cabaret with Lola Falana and a nice retrospective of all the celebs who appeared with Hope on his past USO Christmas specials.  (It’s not all peaches and cream—the comedian is still doing stale jokes with people like football’s Roman Gabriel.)  But there is an amusing sketch with guest Redd Foxx (I’ll bet NBC put a gun to his head) that’s worth the price of admission:

BOB: Come on—crank it up and let’s get started here, huh?
REDD: Okay…if you want to work a man who’s old and…sick…and tired…
BOB: If you’re sick, how did you get in the Navy?
REDD: Instead of a physical, they gave me an autopsy…
BOB: Hey—can you imagine giving a man with my I.Q. a job like this?
REDD: Well, what’s your I.Q.?
BOB: Twenty-three…
REDD: Twenty-three?  I didn’t know you were a college man…


Included on Bob Hope Salutes the Troops is a January 12, 1991 special, Bob Hope's Christmas Cheer in Saudi Arabia.  With a war everybody liked (well…almost everybody), Hope was able to persuade some big names to appear in this one: The Pointer Sisters (they sing I’m So Excited), Marie Osmond (Crazy), Ann Jillian, and Khrystyne Haje (Head of the Class), who does an amusing routine with Hope (I noticed that Bob, now in his late eighties, has cut back considerably on the leering with regards to his female guests) in which he mentions her environmental activism and in particular, her commitment to the California redwoods.  “You planted them…the least the rest of us could do is try and preserve them,” she cracks, producing a king-sized titter from your humble narrator.  Country singer Aaron Tippin is mentioned in the opening credits of this one though he’s nowhere to be found in the special…which is a shame, since they could have snipped a rather unfunny exchange between Bob and Johnny Bench and let Aaron do a tune or two.  Mrs. Hope, Dolores Reade, is also on hand; she was Bob’s only “Christmas cheer” in Saudi Arabia because the government wouldn’t let the other women in the country (they performed on U.S. naval vessels along the coast).

A bonus feature, Bob Hope: Memories of WWII, is also included on the Salutes the Troops collection; first airing in 1995, the Hopes reminisce about Bob’s early years “doing his bit” for WW2 and his first USO tour.  Frances Langford and Patty Thomas are also on hand…though curiously, they’re never shown in the same shot as Bob and Dolores despite it being edited as if they’re all having a conversation.  (For a real reunion between Bob, Frances, Patty, and guitarist Tony Romano check out the DVD Entertaining the Troops, which I reviewed here at the Radio Spirits blog.)

If you’re a fan of classic television, Bob Hope Salutes the Troops is a disc you’re going to want in your collection; it’s the kind of variety special that they literally don’t make any more, though my strong advice would be to watch these telecasts sparingly as Bob likes to recycle jokes from time to time.  Considered by many to be the greatest entertainer of the 20th century, the comedian demonstrates that through his tireless efforts overseas for many so far from home “there was no one like Hope for the holidays.”
Posted by Ivan G Shreve Jr at 7:00 AM