Update: “This case has more angles than a six-pointed star…” 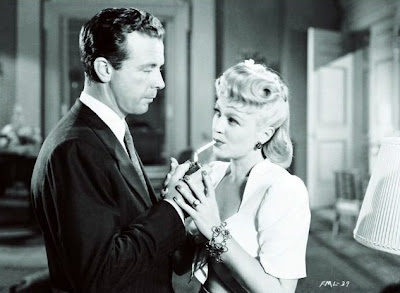 Sixty-seven years ago on this date, actor Dick Powell convinced sponsor F.W. Fitch (the shampoo magnate whose sponsored musical-variety series The Fitch Bandwagon was a Sunday night smash thanks to its plum time spot of following The Jack Benny Program) to allow him to do a detective drama during Bandwagon’s summer vacation, written by Ray Buffum and directed by Dee Englebach.  Powell, who was experiencing a career resurgence from his recent star turn in the 1944 film noir classic Murder, My Sweet, appeared as a hard-boiled gumshoe named Richard Rogue in a program whose official title was Bandwagon Mysteries…but is remembered by old-time radio fans today as Rogue’s Gallery.  (Gallery premiered less than two weeks after Powell reprised the role of Philip Marlowe in a Lux Radio Theatre broadcast of “Sweet” on June 11.) 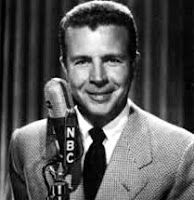 Rogue’s Gallery did well enough over the summer to be renewed at the beginning of the 1945-46 season (though the show switched from NBC to Mutual in the fall, and then back to NBC when the series again replaced Fitch Bandwagon for its summer hiatus), but shortly after the program’s 1946 summer run Dick Powell moved on to other things, and the part of Richard Rogue was taken up by Barry Sullivan when the show had another run during the summer of 1947.  It had one more go-around on ABC from 1950-51, with actors “Boston Blackie” Morris and Paul Stewart trading off as Rogue…and then the show rang down the curtain on November 21. 1951.

A handful of Rogue’s Gallery broadcasts are in circulation among OTR collectors today, and I even did the liner notes for a CD collection of the series released by Radio Spirits a few years back.  The important thing about Gallery—even though some might consider it a lesser series—is that it provided the blueprint for an even more successful crime drama that Dick Powell had a hand in: Richard Diamond, Private Detective, which ran on NBC and ABC from 1949-52, with a short revival on CBS in the summer of 1953 (that was essentially comprised of reruns when the show was sponsored by Rexall).  Radio Spirits has released several CD sets of this first-rate detective show (Dead Men, Trouble, etc.), the latest being an 8-CD collection entitled Surplus Homicides…with liner notes by little ol’ me.

I had originally written a nice essay on Powell and the impact that Murder, My Sweet had on his radio career for The Cinementals…but because that lamented collaborative classic film site has vanished before our very eyes (if it ends up in Blog Heaven, I hope it says hello to my old TDOY Salon blog) and I stupidly destroyed the draft I saved, I was forced to fall back on Plan B with this post.  (Update the Second: Former Cinementalist Irish Jayhawk brought out the Ouija board this morning and was able to locate my post via the underworld of the blogosphere.  You may read it if you so desire, but I do want to mention that if you still want to enter the giveaway, please don't indicate as such on Twitter: I can't guarantee I'll see your tweet.) I'll also take time to announce that thanks to the generosity of Radio Spirits, I have copies of Surplus Homicides to hand out to two lucky Thrilling Days of Yesteryear winners.

The rules, as always, are very simple (in keeping with the guy who pens this blog): all you need to do is send me an e-mail (with “Diamond Homicides” in the subject header) at igsjrotr(at)gmail(dot)com with something equally simple, like “I want to win this, you mug” before 11:59pm EDT next Sunday (July 1).  The next morning, I’ll select two winners via the Random Number Generator (generously donated to the Internets by Random.org) and inform them of their good fortune, mailing out their prizes with all deliberate speed.  You need not supply a snail mail address when you send in your entry unless you’re certain you’re one of the winners…and it’s just good manners (and cricket) to sit this one out if you’ve won something on the blog within the past thirty days (though I think it’s been so long since I did a giveaway that might not apply to anyone).  (Update: Phil Schweier pointed out to me that I have once again typed my e-mail address incorrectly.  I have made the correction.)

If you’re not familiar with the Richard Diamond series, you’re in for a real treat—it’s a wonderful little show with Powell at his saucy best (and even if you don’t care for Dick as wisecracking tough guy he harkens back to his Warner Brothers chorus boy days by singing a song at the end of the show practically every week), with wonderful support from future Oscar winner Ed Begley (as Lt. Walt Levinson), Virginia Gregg (as Helen Asher, Diamond’s socialite girlfriend) and Wilms Herbert (who doubles as the stupefyingly dense Sgt. Otis Ludlum and Francis, Helen’s butler).  The scripts are a splendid blend of action and humor…which is what you would expect from the creator and writer of the series, future director Blake Edwards—who would later incorporate elements of Diamond into TV’s Peter Gunn.  This eight-disc collection is valued at $31.95 and would make a lovely gift for the crime aficionado, film buff or OTR fan in your household.  Enter today for a chance to win!
Posted by Ivan G Shreve Jr at 8:00 AM

Ivan, I'm a sucker for detective shows a la RICHARD DIAMOND, PETER GUNN, 77 SUNSET STRIP, and other shows of that ilk! At his best, Blake Edwards really knew how to blend suspense, comedy, and sheer cool. I really enjoyed your ROGUE'S GALLERY post -- and what the heck, I just might try my hand at the contest, too! :-)