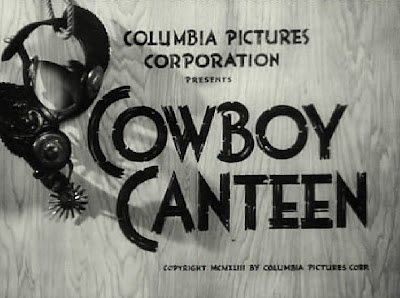 During World War II, American and Allied servicemen who found themselves in Manhattan could often avail themselves of the recreational services provided by the Stage Door Canteen, a “home away from home” club that provided free grub and other entertainment, financed by the American Theatre Wing and served up by luminaries such as Lunt and Fontanne, Katharine Cornell and Helen Hayes.  The Canteen was even made the background of a feature film in 1943, as was the franchise—known as the Hollywood Canteen, founded by Bette Davis and John Garfield—in 1944.  Both movies are crammed with celebrities and stars, and offer up diverting musical and comedy moments for those of us who like our nostalgia spread thick like peanut butter.

Columbia Pictures took a whack at starting their own version of the Stage Door/Hollywood Canteens with Cowboy Canteen, a 1944 quickie that features B-western cowboy favorites and their sidekicks sprinkled with much comedy relief and musical/novelty acts.  The plot is paper thin: female vocalist Connie Gray (Jane Frazee) and her best gal pal Vera Vague (as herself) go west (young man) to the idyllic hamlet of Lost Cow, California on a ranching vacation, accompanied by their theatrical troupe consisting of a female chorus known as The Tailor Maids and former Three Mesquiteer Max “Alibi” Terhune, who plays a magician-ventriloquist named “Professor” Merlin.  The group’s trip by train is shown at the beginning of the picture, where they are entertained by Jimmy Wakely and His Saddle Pals, stationed on a nearby Army base.

Arriving in Lost Cow, Connie, Vera and the rest are greeted by Spud Harrigan (Guinn “Big Boy” Williams), foreman of the “Lazy B” ranch on which they have signed on to work.  Taking the newcomers to the ranch via horse and wagon, Spud loses control of the team and all are rescued through the efforts of the Lazy B’s owner, Steve Bradley (Charles Starrett), and his rival/nemesis Tex Coulter (Tex Ritter).  Steve is livid that his new ranch hands are greenhorns, and voices his displeasure about the situation…but seeing as how he and Spud are scheduled to report for the Army in the morning, he must make do with what he’s got.  takes an immediate shine to Connie, and tells Steve he’s planning to win her heart.

While Steve and Spud are in boot camp, Steve receives letters from his mother (Edythe Elliott) informing him that despite their inexperience, Connie and the troupe are doing a first-rate job at running the farm…and that Tex, who’s also agreed to help out while Steve is away, has become a completely changed man—dedicated to spending equal time at hard work and courting Connie.  Though Steve told he could have free reign with any sort of romantic designs on Connie, he’s started to develop feelings for her himself despite their many disagreements.

Steve and Spud get a chance to see Connie and Vera when their commanding officer (Herbert Hayes) assigns the two of them to oversee the construction of a “canteen” in a barn at the Lazy B, where acts like Roy Acuff & His Smokey Mountain Boys (and Girls) and the Mills Brothers are rehearsing.  (Okay—it’s …they can’t afford the big names like Warner’s Hollywood Canteen.)  Steve confronts Tex and tells him that he’s fallen for Connie, and the two of them brawl caveman-style in order to decide who will win her…something that doesn’t set at all well with Connie, who refuses to be treated like a prize at a rodeo.  But despite behaving like a real wanker throughout most of the picture, Steve finally sweeps Connie off her feet…and the two of them will marry when Steve returns from overseas, assuming he hasn’t had his ass shot off by then.

If you’re a B-western fan, you’ll probably get a kick out of Cowboy Canteen.  You’ve got two of the movie cowboy greats, Charles “The Durango Kid” Starrett and Tex Ritter, squaring off against each other (several characters comment that the two of them have been scrapping since they were kids)—but what I thought so odd about this is that I found myself rooting for Ritter over Starrett, simply because I’ve always thought Tex was more the charmer.  (I’ve only seen a handful of Starrett’s westerns, and I’m just not as sold on him as other people.)  Frazee, a veteran of these B-musicals like Hi’ya, Chum and Kansas City Kitty (she also appeared as leading lady to Roy Rogers in a few of his films), was never what one would call a commanding screen presence but she was always easy on the eyes (and a great vocalist to boot).

There’s the added bonus of future Monogram hero Jimmy Wakely being on hand, though he admittedly doesn’t do more than warble a tune or two; he figures very little in the actual plot.  But the addition of stellar sidekicks like Williams, Terhune and Dub “Cannonball” Taylor is a plus; as each man has a moment in the spotlight to trot out comedic hi-jinks (Williams is the object of Vague’s affection and acts the lunkhead accordingly; does an amusing bit with a counting horse).  Terhune performs with his dummy, Elmer…but it doesn’t come off nearly as creepy as when I watch it in the Mesquiteers films.  I liked this part of the routine, which sort of serves as a reminder how funny Edgar Bergen and Charlie McCarthy were in the 1943 film version of Stage Door Canteen and how couldn’t afford Bergen-McCarthy money:

ELMER: Did you know I’m kin to Charlie McCarthy?
PROFESSOR: Charlie McCarthy?
ELMER: Yeah…
PROFESSOR: What kin?
ELMER: Stepbrother…
PROFESSOR: Oh, stepbrother…?
ELMER: Yeah… both made out of the same doorstep…
PROFESSOR: Well, how do you like Charlie?
ELMER: I hate the s…
(The Professor puts his hand up against Elmer’s mouth to censor him)
PROFESSOR: Here now…wait a minute!  Now, how about Mortimer Snerd?
ELMER: Oh, he’s a dumb…
(The Professor again places his hand against Elmer’s mouth for the sake of the Hays Office)
PROFESSOR: Now, Elmer…sit up here…they’re both good boys…
ELMER: Good for what?
PROFESSOR: Well, they’re just naturally good boys…if I had a dummy like Charlie, I’d get somewhere…
ELMER: Yeah, and if I had a ventriloquist like , I’d get somewhere…

But the comedy honors in Canteen go to TDOY fave Vera Vague—known outside of movies, radio and TV as “Barbara Jo Allen,” of course (Vera/Barbara and I share a birthday) but she was being billed by her better known nickname by this time (made popular on Bob Hope’s radio program) and more than likely got the gig because she was making comedy two-reelers for Columbia when this picture went before the cameras.  Vera is a real delight; eliciting chuckles even when the scripting is weak (it was written by Paul Gangelin, with noticeable lines and bits of business contributed by gag man Felix Adler, a veteran of the studio’s two-reeler department).  Vague is paired up with Williams in this one and they share some great scenes—my favorite is the one where Williams has offered to help Vague with the supper dishes and as she washes each dish and hands them to him to dry, he’s so infatuated with her that he keeps slipping them back into the water.  Vera even does a brief comedy exchange with Tex Ritter before she breaks into song (You Man You, written for the film by Saul Chaplin and Walter G. Samuels):

: Vera, what are you gonna do tonight?
VERA: Nothing, you dear boy…I’ll meet you right after the show…
(laughing): No…no…you don’t get me—I mean…uh…what’s your specialty?
VERA: Men…eighteen to forty-five, and no dependents…
: What I’m tryin’ to ask is…are you gonna sing, or dance, or…can you tell a joke?
VERA: Certainly…I recognized you the moment you came out!

Most of the original tunes written for Canteen are pleasant but unmemorable; but there are nice highlights from the Mills Brothers (they sing both and Paper Doll) and the King of Country Music himself, Roy Acuff (Night Train to Memphis).  (The downside is that you also have to sit through a couple of acts that offer up prima facie proof while vaudeville died: one of them is a guy [Bill Hughes] who does a ventriloquist act with a “crow” and the other is billed “Buck, Chickie and Buck”…despite there only being two people in the act.)  Nevertheless, the production breezes by in an hour and ten minutes, and connoisseurs of cowboy stars and lowbrow comedy will find it to their liking, directed by B-movie auteur Lew Landers (the poor man’s William Beaudine).
Posted by Ivan G Shreve Jr at 10:30 PM