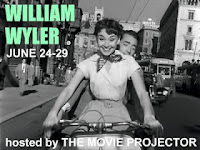 With The Cinementals being vaporized like Alderaan (little joke for the movie nerds out there) and the fallout from The Great Twitter Skirmish of 2012, the positive effect for Thrilling Days of Yesteryear is that I’ll have a little free time to take care of bidness not only here but at my gig at the Radio Spirits blog as well.  (I’ve been good at keeping up with Mayberry Mondays and Serial Saturdays…but Overlooked Films on Tuesday has definitely taken on some damage.)  In fact, this Thursday TDOY will be contributing an essay to The Movie Projector’s William Wyler Blogathon, which started today and will be the focus at that fine blog until June 29. 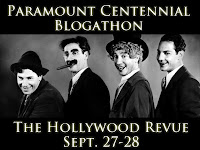 Angela at The Hollywood Revue has also got a blogathon going in the old classic movie crockpot: come September 27th, she will be inviting all interested bloggers to participate in The Paramount Centennial Blogathon, in honor of the 100th anniversary of the studio.  I’ll let her explain what it’s all about (Alfie).

If you don’t know what you want to write about yet, don’t worry about it, you don’t have to sign up for a topic.  If you’re interested in participating, just either leave a comment or send me an e-mail at HollywoodRevue AT gmail DOT com.  If you have any questions, please let me know.

I told Angela on Twitter (and made it official in the comments section of her announcement post) that I was definitely in for this one…still trying to narrow down my topic but with so many classic film comedies produced there it shouldn’t be too hard to tie one down.

Well, it’s a shortened checklist because I’m working on both an outside-the-blog project and the latest edition of Mayberry Mondays.  But I did want to close by revealing that I have finally learned how to spell Cliff Aliperti’s name correctly.  Have a great week, and the Milk Duds are on me.
Posted by Ivan G Shreve Jr at 6:00 PM

Man! Thanks for keeping us that reside in a cave informed Ivan!
Hope you're having a fantastic weekend.
For the record I have always been able to spell Cliff's last name correctly. Now if only I could get proper grammar and punctuation down on my blog.
Page

Until I saw that Twitter convo after the fact, I didn't realize I also had been spelling it incorrectly. Not sure how you spelled Cliff's name, but I spelled it "Alpierti." Sorry, Cliff.

I'm proud to say that I have always spelled Cliff's name correctly. However, it has taken me days to realize that The Cinementals is gone. What the heck happened? That is really sad.