“Is it bigger than a breadbox?” 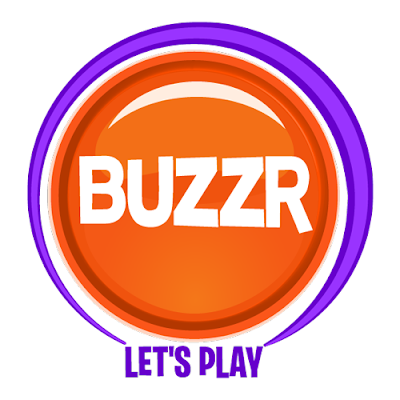 The night that I wrestled with the meshuggeneh desktop computer—the one that eventually had to be hauled into the repair shop so that the hard drive could be replaced—I was stuck for something to do while the diagnostic tests were running, so I grabbed the bedroom TV remote and started in with the channel surfing.  Imagine my delight when I learned that DISH has added a new channel to its lineup: BUZZR (channel 245), the Fremantle Media-owned subchannel that offers up classic game shows to those couch potatoes jonesing for a fix of Match Game or Family Feud.  Wikipedia says that DISH added BUZZR in May of this year but I’m still a little skeptical about that only because I go “round the horn” on a frequent basis if I can’t sleep at night, looking to see if I can find anything that won’t require a lengthy time investment.  It seems to me I would have come across BUZZR sooner, but…what the hey. 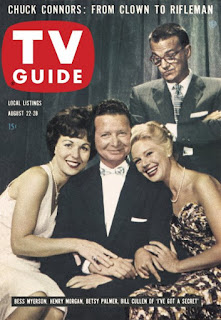 I’m not a big game show fan as a rule.  I watched a lot of them as a kid, and then eventually grew to understand that most of them are vacuous, insipid, and a clear threat to my logging as many classic movies under my belt before I’m summoned to that Great Movie Palace in the Sky.  Still, I have a soft spot for the panel shows of the classic TV era like What’s My Line?, I’ve Got a Secret, and To Tell the Truth…because there are celebrities on these vintage telecasts that are idolized by your humble narrator like Fred Allen (a panelist on Line from 1954 until his death in 1956) and Henry Morgan (Secret).  The Game Show Network used to run these repeats in the 1990s until Sony’s contract ran out…but by that time, GSN was starting to shift toward their own homegrown programming anyway.  (This resulted in people of my vintage reclining in our porch rocking chairs and grumbling about how great things used to be “back in the day.”  “Remember when AMC and TVLand used to be good?  Those were the days…”) 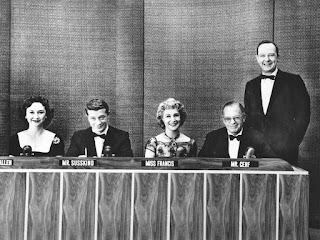 I can’t quite put my finger on it…but something tells me that unless you subscribe to one of DISH’s major packages (America’s Top 200, America’s Top 250, etc.) BUZZR isn’t going to be around Rancho Yesteryear for long.  (We have the Flex package, see, which—thanks to member of the TDOY faithful Barry—allows us to get channels we’ll actually watch and insulates the ‘rents from any potential danger resulting from my succumbing to The Greatest Cable Channel Known to Mankind™ withdrawal and running after them with a butcher knife.  Okay, I am kidding about that.  Nobody runs in my family unless we’re chased.)  So I am currently DVRing every episode of Truth, Secret, and Line that I can lay my hands on; it will make marvelous filler for when I’m dubbing off movies to discs.  That’s three down and seven to go…Arlene?