Ode to the little brown Chic Sale out back 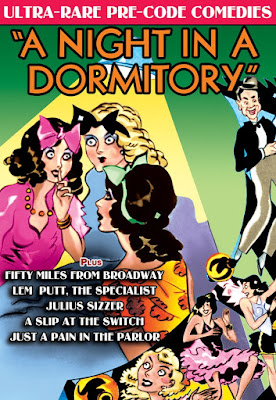 You never really get a handle on how gosh-darned huge the Internets are until you use The Google to research the career of Charles Partlow ‘Chic” Sale (1885-1936), a vaudevillian who began his film career in the silent era…and might be recognizable to fans of The Greatest Cable Channel Known to Mankind™ for appearances in such features as Stranger in Town (1931), Men of America (1932), and Treasure Island (1934).  Sale frequently performed in old-age makeup that gave the illusion he was a grizzled old codger (I’m quite fond of his performance in 1931’s The Star Witness, in which he plays a cantankerous Civil War veteran who comes to the aid of his family when they’re threatened by mobsters) when he was really only in his mid-forties; Chic died far too young at the age of 51 from pneumonia, his last movie appearance being a small role in one of my favorite films directed by Fritz Lang, You Only Live Once (1937). 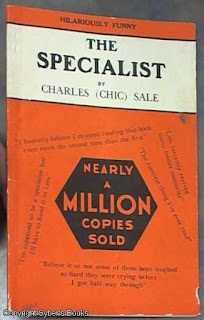 But back to that “how vast is the World Wide Web?” thing.  There is a website devoted to Chic: chicsale.net.  There you can buy a copy of his main claim to fame: a 1929 publication entitled The Specialist.  You see, Chic created a fictional character in “Lem Putt”—based on a man he knew in his former stomping grounds of Urbana, Illinois—whose occupation was the construction of privies (outhouses).  It began as a monologue that Chic would perform at Rotary gatherings, and when the material became well-received by audiences Sale decided to incorporate it into his stage act.  Because vaudeville was notorious for having comics “liberate” material from their fellow funsters (*cough* Milton Berle *cough*), Charles Sale decided to publish the material in book form in 1929 so it would be protected by copyright.  The book became a best seller, and a follow-up that Sale penned, I’ll Tell You Why, was also warmly received by the book-buying public.  You can purchase both books at the site, by the way; according to the site The Specialist is “now in its 26th printing, it has sold over 2,600,000 copies worldwide.  It has been translated into 9 languages and published in 12 countries.”

The Specialist inspired Lem Putt, the Specialist (1930)—one of six two-reel comedies available on the latest release by Alpha Video of their Ultra-Rare Pre-Code Comedies series (Volume 3).  You could say, in a small way, that Chic Sale is the star of this collection because another one of his two-reelers, A Slip at the Switch (1932), is also in this collection.  (For reasons that have me bamfoozled, neither of these shorts are listed in Sale’s filmography at the [always reliable] IMDb.)  Switch is a diverting little romp that casts Sale (his character is named “Lem”—but I don’t know if his outhouse salesman got a promotion or not) as a station agent who tangles with a pair of tramps (Bud Jamison, Charlie Hall) who have robbed him.  Monte Collins is also in this one (as a telegraph operator), which helps a lot; the entire concoction was directed by Mark Sandrich, who would later go on to helm many of the Fred Astaire-Ginger Rogers musicals: Top Hat (1935), Follow the Fleet (1936), etc.  (Sandrich also held the reins on two of the best Wheeler & Woolsey films, Hips, Hips, Hooray! [1934] and Cockeyed Cavaliers [1934], not to mention one of my favorite Jack Benny vehicles, Buck Benny Rides Again [1940].)  Sandrich also died young, succumbing to a heart attack at the age of 43 in 1945.

Switch is a lot more entertaining than Specialist, to be brutally honest.  Having someone talk about the fine art of building privies isn’t truly all that funny to me, and it’s a static presentation to begin with—it might have helped if they had done Sale’s “talk” as a one-reeler…but believe you me, he’s no Robert Benchley.  While The Specialist proved to be a positive boon to the comedian’s career, Chic wasn’t particularly enthusiastic about the fact that his name—“Chic Sale”—was often used as shorthand for “outhouse.”  (That should explain the joke in this header, a reference to my fellow Appalachian highlander Billy Edd Wheeler song smash which hit #3 on the country music charts in 1964.)

The funniest short on Ultra-Rare Pre-Code Comedies, Volume 3 is Just a Pain in the Parlor (1932), a very sprightly two-reeler starring Harry Sweet.  Who is Harry Sweet and what does he do when he’s not tending bar, I hear you ask.  Sweet was a writer-director-performer—whose career also got started in the silent era—who played a large role in the establishment of RKO’s shorts department.  He instigated the Edgar Kennedy “Mr. Average Man” series, and supervised comedies starring Clark & McCullough…but at the risk of starting a noticeable pattern in this post, Harry is another name on the “much too soon” list, perishing in a plane crash in 1933 at the age of 31.  Parlor is a delight, as Sweet plays an Olympic athlete who’s “adopted” by a man named Smith (James Donlan), fearful that Mrs. Smith (Cecil Cunningham) is going to strenuously object.  Told by one of his fellow athletes that being invited to Casa del Smith is a ruse to get him to break training, Harry puts up quite a fuss when the Smith’s butler, Collins (Monte again!), tries to prepare him for presentation before Mrs. Smith and her party guests.  Monte gets an assist helping Sweet into the bathtub from no less than four sub-butlers (including Charlie Hall and Irving Bacon)—a hilarious scene—while violinist Billy Gilbert attempts to keep his cool during his recital.  Having Vernon Dent make an appearance as the speaker who urges the adoption of the athletes is the cherry on top of the sundae; the whole concoction was directed by George Marshall.

Benny Rubin, who was present and accounted for the previous Ultra-Rare Pre-Code Comedies release (Volume 2), also makes an appearance in Julius Sizzer (1931)—a gangster parody that lets Rubin tackle two roles, brothers Julius and Liddle Sizzer.  (That’s the caliber of the material, friends and neighbors—and what’s more, both brothers converse in heavy Yiddish accents.)  Someone at the (always reliable) IMDb wasn’t too fond of this one, but even though I thought The Messenger Boy (1931, from Volume 2) funnier I’d be lying if I didn’t snicker once or twice during Sizzer (I have a fascination with dialect humor).  I have a handicap in that I give Benny more leeway because I always enjoyed him on The Jack Benny Program (one of his great bits was playing the “Information” clerk who’d always answer Jack’s questions with “I dunno!”).  In fact, I watched The Shaggy D.A. (1976) the other night (it was on BYU-TV, of all places) and giggled when I saw Rubin as a waiter who gets plastered with cherry pies.  (Go on.  Shame me.  I deserve it.) 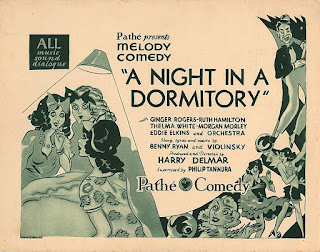 If not for the presence of Lem Putt, the Specialist, Fifty Miles from Broadway (1929) might give it some competition in the “worst short in this collection” department; it’s an early talkie that looks as if someone pointed a camera at a dinner theatre production, with the impending marriage of a boy and girl threatened by their fathers’ ongoing feud.  The remaining short on this set is A Night in a Dormitory (1930—spoiler warning: it’s mostly set in a nightclub), which boasts one of Ginger Rogers’ earliest movie appearances as she sings Why Can’t You Love That Way? and I Love a Man in Uniform in Helen Kane-fashion, and features Si Wills (billed as Morgan Morly) and Eddie Elkins doing jokes in a routine that might have made Abbott & Costello wonder out loud: “I don’t know about these jokes, fellas…”  (Wills would later marry and write material for his more famous wife, Joan Davis.)  Dormitory is worth the watch to see the young Ginger, and overall the material on Ultra-Rare Pre-Code Comedies, Volume 3 is a must-own for those folks (like me) who have a thing for offbeat two-reelers.