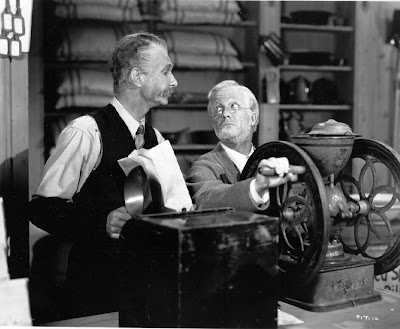 Over at the Radio Spirits blog (the paying gig), glasses are raised in tribute to the eighty-second anniversary of Lum and Abner, one of the true delights of the Golden Age of Radio and, as I stated in the first post on this blog (that would be the non-paying gig) so many years ago, the very first old-time radio program I listened to.  (It was broadcast over WCAW in the city of my birth, —and according to my paisan , is still heard weekday mornings around on WVOW in .)  Nothing puts a smile on my face than visiting from time to time with the residents of Pine Ridge and for those of you who are interested RS has several collections available of this one-of-a-kind comedy serial. 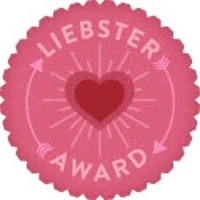 Some outside RS projects are going to keep me occupado for the next couple of weeks, so I won’t be able to get to any of the usual shenanigans involving Don Winslow or the gang that make up Mayberry Mondays.  I do, however, want to thank a couple of my fellow classic film scribes for doling out coveted blog trophies to TDOY within the past few weeks or so: from the irrepressible Brian Schuck (I don’t actually know if he’s irrepressible—I just like using that adjective) at Films from Beyond the Time Barrier (dun-dun-DUN!!!), the highly-sought-after and green-with-envy-coveted Liebster Award.  (“Liebster” is German for “meme,” by the way.)  I profusely apologize for not thanking Brian earlier for this award (he slid it my way back in the early part of April); I had it in my “to-do” box and for one reason or another kept ignoring it until it finally grew to gargantuan proportions and went on a rampage, heckbent on destroying the world!  (Well, in keeping with the theme of his blog and all.) 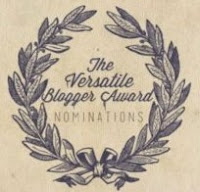 Just when I was convinced that this couldn’t possibly be topped, at Once Upon a Screen risked certain embarrassment and ostracization through cue card reading by bestowing upon this ‘umble scrap of the blogosphere the Versatile Blogger Award.  ( also maintains a classic TV blog, How Sweet it Was—I need to remind myself to mention this more often.)  Multiple mea culpas to her for not acknowledging her kind gesture in a more timely fashion...and suffice it to say, both of these honors have left my gob positively smacked.

And now here’s the disappointing part: I’m supposed to be a good net citizen and pass these on to other worthy blogs but I’ve just recently started a rebellious phase whereupon I’m breaking all the rules.  Seriously.  (Just yesterday, I only waited a half-hour to go swimming after eating.  Born to be mild, baby.)  These awards also want people to reveal things about themselves, and I’ve just run out of interesting things to say about me.  (I could make some up—“I’m married to…uh…er…Morgan Fairchild...yeah...that’s the ticket!”—but it wouldn’t be right.)

Besides, if you’re curious to hear me prattle on about myself, I invite you to walk, single file, over to All Good Things—where my friend Monty had me over as the subject of his monthly “Be My Guest” feature.  I had a lot of fun answering his questions despite the fact that I always get a little self-conscious about things like that…as a famous cartoon rabbit once remarked: “Oh, I’m so unimportant!” 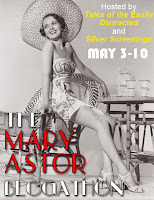 The next time we get together on the blog, it will be to talk about a classic episode of the TV series Checkmate, “Brooding Fixation” ()—which I will be writing as my entry in The Mary Astor Blogathon, sponsored by Dor at Tales of the Easily Distracted and Ruth at Silver Screenings.  (I’m scheduled for May 7.)
Posted by Ivan G Shreve Jr at 4:00 PM

All accolades earned by you and TDoY are truly deserved. You're a fine writer, Ivan, and I always enjoy your blog (even if I leave fewer supportive comments than I should).

Whoa daddy, check out the beard on Ivan in his new facebook photo (right margin).

Man, I am so gonna tug on that if we ever meet face to face, Ivan.

All accolades earned by you and TDoY are truly deserved. You're a fine writer, Ivan, and I always enjoy your blog (even if I leave fewer supportive comments than I should).

Thanks, Rick! (Uh...the check's gonna be a bit late this month--the landscaper cost a bit more than the 'rents and I estimated.)

Whoa daddy, check out the beard on Ivan in his new facebook photo (right margin).

Pay no attention to the man on the Facebook badge! ("Badges? We ain't got no badges. We don't need no badges. I don't have to show you any stinkin' badges.")

Wait ... I could have tugged on the beard???? I missed a golden damn opportunity!!! (But you really ARE Santa, right, Mr. Shreve?)

But you really ARE Santa, right, Mr. Shreve?

Sleeps with the whiskers outside the covers-- the cold air makes them grrrrrrrow!