The old house looks the same 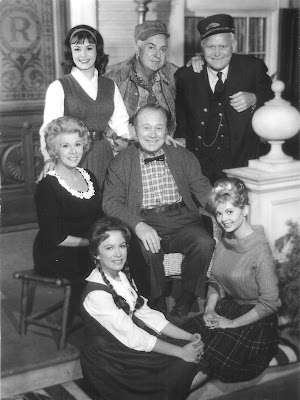 (Throat clearing) Well…I’m not entirely certain where I should begin.  Except to acknowledge that, yes, I have been away from the blog for a while…too long, according to those pesky stats that turn up on this thing from time to time.  Part of it is outside activity, but a large portion must be chalked up to what my BBFF Stacia cleverly created as The Laziness Vortex™…which I have trademarked and will continue to do so until I’m reasonably sure she’s not reading.

There’s been news both good and not-so-good going on here at Rancho Yesteryear; the bad news I’d rather not talk about but the good news is that I’m hoping to get a chapter of our irregular Serial Saturdays feature, Don Winslow of the Navy (1942) up this weekend as well as a visit to America’s favorite TV small town on Mayberry Mondays.  (I think I’ll be able to apply myself to these two tasks.)  In the meantime, Radio Spirits asked me to commemorate the 107th natal anniversary of one of the premier radio comedy actresses of all time, Bea Benaderet, over at the paying gig.  Here’s an interesting tidbit that I learned the other day that will either have you saying “Yes…that is interesting” or “That boy has entirely too much free time at his disposal.”  Anyway, Benaderet relinquished her assignment as the voice of Betty Rubble to actress Gerry Johnson at the beginning of the primetime animated hit The Flintstones’ fifth season, ostensibly because her new gig as the star of Petticoat Junction was taking up much of her time.  Gerry Johnson and Bea Benaderet share the same birthday.  Incredible but true!  (So this would have been Gerry’s ninety-fifth birthday…she passed away in 1990.) 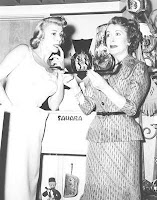 I am, of course, one of the world’s most devoted Bea Benaderet fans—as my paean over at the RS blog will no doubt testify.  I’d like to see CBS-Paramount get on the ball and continue with the Petticoat Junction releases (they quit after the first two seasons) because although I realize that even if it’s a show even blander than Mayberry R.F.D. my love for Bea will not allow me to rag on it…and if I catch anybody doing so on the blog I will ask the offending party to step outside.

CBS has announced (these segueways—smooth as glass, I tells ya!) that they’re nearing the end of the road as far as the venerable legal series Perry Mason is concerned: the first of two volumes that will comprise the ninth and final season have a street date of June 11, according to TVShowsOnDVD.com.  There were thirty episodes in Mason’s valedictory season, so this first volume will feature fifteen of them; sadly, the company is not going to do what it had been doing for sometime now and release both volumes simultaneously.  The price of the 4-disc set is $45.98 and your first born.  (Okay, I’m only slightly kidding about that.)

There’s going to be a glut of classic TV westerns headed for Disc Gulch in the upcoming months—the biggest announcement is probably that the Warner Archive has got the first season of Sugarfoot in the works according to this TSOD announcement: a listing at Planet says a 4-disc set (with a of $49.99) will be out May 7 containing all twenty episodes of the show’s freshman season.  Will Hutchins stars as would-be lawyer Tom Brewster…whose nickname “Sugarfoot,” I was once told, was a degree lower than a “tenderfoot.”  I haven’t seen too many episodes of this show that ran for four years and a total of sixty-nine episodes, save for the occasional stray rerun on GoodLife TV or whatever they call that channel now; there’s an episode entitled “The Return of the Canary Kid” that’s been available on a few public domain western TV collections, and I think I have it somewhere in the stack o’discs here at the house. 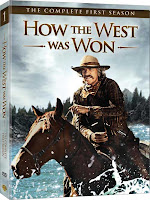 Warner Home Video will also release the first season of the 70s series How the West Was Won to on July 9th in a 2- set that will run you a of $19.98.  That’s because the “first season” consists of the 1976 TV-movie The Macahans and the subsequent three-part miniseries.  The Encore Westerns channel was running this on Saturday mornings shortly before the time I moved to the new House of Yesteryear in 2011—they might still have it on but I’m too lazy to look it up.  (Okay, I lied—I looked and they don’t have it anymore.)

Oh, and there’s also a quick blurb at TSOD that the eighth season of The Virginian will be released (via Timeless Factory Video) on July 16, according to a mention on James Drury’s website.  (The ninth season of that show, The Men from Shiloh, was released earlier.)  The Virginian used to be on Encore Westerns but I think has it now. 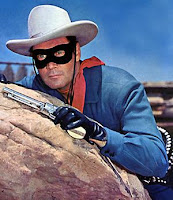 Now for the really gi-normous western news.  My pal FederalOperator 99, who runs the blog Allure, messaged me on Facebook one day to ask if I knew of any other major releases of The Lone Ranger other than the 75th Anniversary Collection that Classic Media put out in 2008.  The only other release that I was aware of was a Rhino set that contained some of the color episodes from the final season (which is now OOP and fetching the seller’s weight in gold at Amazon and other points south); I just happened to have a copy because my mother is a Lone Ranger nut.  But now comes word—hot on the heels of that abominable Disney film that’s due out this summer, he editorialized without having to see it—that according to a pre-order listing at Amazon, a box set entitled Lone Ranger: Collector’s Edition will be released on June 4…containing thirty discs with a (possibly estimated) running time of 5500 minutes—which would correspond to 221 episodes (according to TSOD, who did the math), the entire run of the series.  It’s got a $199.99 …and while I’m sure I could pick that up cheaper if I shopped around a bit, I’m wondering how this will play with the lady who runs Rancho Yesteryear, a.k.a. Mom.  Mom’s a fan, but she has also editorialized from time to time that I, quote, “have too many goddam ’s.”

But FederalOperator 99 told me he’s going to “pull the trigger” on this one…adding “Of course, I’ll only shoot to wound not kill.”  (Well, it made me laugh.)

A couple of quick announcements and then I’m off to other pursuits: the second season of Combat! will be released to stores on May 14th and Season 3 on June 4—these aren’t technically brand-new announcements, just repackaged releases (since the originals were doled out in the beginning as split-season sets)…but if anyone has any info on whether the shows on these are in better condition that the ones released the first time around please don’t hesitate to let me know because I’d be willing to pay for better copies.

Finally, the long-awaited news that the short-lived 1975 sitcom When Things Were Rotten—a cult favorite that came from the off-kilter mind of Mel Brooks—may be finally coming to .  The details are kind of sketchy, but TSOD reports that a pre-order listing has surfaced on Amazon that would feature all thirteen episodes on a 2-disc MOD set at a of $24.95.  (Once I got wind of this announcement, I was unable to get the theme song from the series out of my head for the rest of the day.)

So I will try to have the Serial Saturdays and Mayberry Mondays entries up this weekend…and next week, there will be guaranteed activity on the blog because TDOY will be participating in The Movie Projector’s Cagney Blogathon (April 8-12) with a review of Kiss Tomorrow Goodbye (1950).  Oh, and I informed our friend Dor at Tales of the Easily Distracted via the Twitter machine that I’ve called an audible with regards to her May Astorthon: instead of Smart Woman (1931), TDOY’s entry will be a March 14, 1962 episode of the TV series Checkmate entitled “Brooding Fixation” that guest stars Mar and blog fave Frank Overton.  Be there.  Aloha.
Posted by Ivan G Shreve Jr at 8:00 AM

Hey, welcome back! I've missed seeing TDOY pop up in my reader :)

I remember "When Things Were Rotten"...that -is- going back a ways, for sure.

Hope you're sticking around and that all is well.

Thanks for the welcome back, Mark! (My dreams are my ticket out.)

Sorry about being away from the blog for so long - I hope to have some more stuff up here soon,

"The five o'clock whistle's on the blink,
The whistle don't blow and whaddya think,
My Pop is still in the factory,
'Cause he dunno what tiiiiiiiiiiiiiiiiiiiiiiiiiime it happens to be!"

wow. I love the Lone Ranger. was so happy to see that they are coming out with all the seasons. great site this is. lots of good stuff.