Doris and the riders get the week off 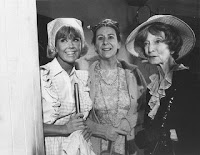 With the new computer arriving at Rancho Yesteryear Thursday (I decided putting it together would work better the following day) and the scheduled blogathon participation this week, I decided to give a short vacation to Serial Saturdays and Doris Day(s)…so you’ll need to look for them to return beginning Saturday the 20th.  Actually, you’ll need to knock wood as far as Doris goes—I put the disc containing the first eight episodes of Season One in a paper DVD sleeve…and now I’m having trouble locating where it is.  I would blame the famed Bedroom Disappearing DVD Vortex but I think it may have been scooped up by my mother, who gathered up a lot of loose paper sleeved discs and shoved them into storage boxes on the new DVD shelf in the dining room.  Every time she walked past that shelf and saw all that unused space…well, you can’t blame her for going out of her way to fill that up.  It's a Mom thing.  (It’s like walking into a room and seeing a picture hanging crooked…she is powerless to ignore it.)

As for the new computer—well, it’s lovely being able to do things at blazing speed, but the Windows 8 is a bit of a nagging toothache.  Interestingly enough, I use the wireless mouse to navigate more than the touch screen.  I was a little disappointed that the transfer cable and software didn’t grab everything off the old computer (nor did it let me know what it could and could not grab) and I will eventually have to hook up the old PC to see if there’s anything I missed.  I tried downloading an old version of a movie database software that I paid for but I can’t get it to work on the new Windows so I may have to buy the newer version…and seeing as I’m too freaking cheap, I’ll probably look around a bit.

In any event, Thrilling Days of Yesteryear’s entry for the Barbara Stanwyck Blogathon (sponsored by The Girl with the White Parasol) will be posted on Tuesday (July 16) and the Me-TV Summer of Classic TV Blogathon entry (courtesy of The Classic TV Blog Association) will be up the following day.  (Looks like I picked the wrong week to think about sleeping.)