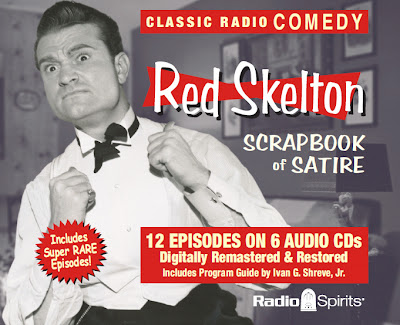 Over at the Radio Spirits gig—or what my mother reverently (perhaps irreverently) describes as “the groceries money”—we roll out the three-tiered cake (with buttercream frosting, even!) to celebrate the centennial birthday of Vincennes, Indiana’s favorite son: Richard “Red” Skelton.  My association with Radio Spirits has allowed me to be able to contribute liner notes for three separate CD collections of classic Skelton broadcasts—including the one pictured above, which has just rolled off the assembly line in time for Red’s one hundredth.  It’s a great little set, one that I endorse most heartily…and if you’re good and don’t draw on the walls I might have one or two of them to give away on the blog sometime in the near future. 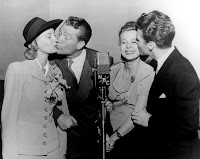 When Red started broadcasting for Raleigh cigarettes on October 7, 1941, two of the supporting performers on the program would soon be known as “America’s favorite young couple”: Ozzie and Harriet Nelson.  As luck would have it, Harriet Hilliard is also celebrating a birthday (born in 1909); that must have been a lot of fun, celebrating dual natal anniversaries during the time they were on the show.  If you’re curious as to who else is having cake and ice cream, why not add @ClassicFlix to your follow list on the Twitter machine?  (It’d be a lot cooler if you did.)

And I haven’t forgotten that I promised to look at the Coming Distractions for August last week…but it’s been a very hectic one, what with all the blogathon activity and all.  I will cobble it together for tomorrow, while I continue the hunt for the elusive Doris Day Show DVD.

Skelton's brand of humor in DuBarry was a Lady (1943) is enjoyable. He's a Schmoe who simply reacts to life's problems. He's not reaching for a joke; life is a joke to him and he's bent on having fun.

I've not heard his radio shows, so this would be a good time to start.

Ooops! I commented on your blog; isn't that like writing on your wall? :) I'm a naughty, little cheesy blintz, ain't I?

When I worked at our local PBS station, I was lucky enough to meet Red Skelton. He was gracious and personable; carried a cane with a gold carved top (can't exactly remember the shape). Red was one dapper fellow!