This week at Thrilling Days of Yesteryear

I am diligently working on getting this week’s Doris Day(s) up for tomorrow…but I wanted to give you a heads-up that it might not post at the usual time.  There have been some pretty big doin’s here at the House of Yesteryear—notably the acquisition of a bookshelf that my sister and her partner could not take with them to their new West Coast digs.  (I also inherited shelf space on a previous unit that formerly held the toys my nephew would play with whenever he came over to the house.)  With an empty shelving unit at Rancho Yesteryear, naturally it would not be long before my mother started nagging gently suggesting that I relocate to the vacant space several stacks of DVDs that were cluttering up my room.

I’d estimate that I’ve cleared out about 95% of the discs that were piled up on my worktable, the only other chair to sit on, the floor, etc.; I’ve still got a stray box or two to round up but otherwise it is a marked improvement.  Mater gave me the seal of approval when she poked her head in and dryly remarked: “Hey!  You have a piece of furniture I didn’t know was there!”  (She was referring to my dresser.  She’s a real doodle, that one.) 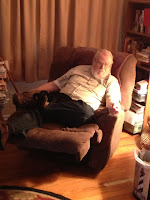 …okay, I stuck that in there for comic effect—the computer was originally purchased from Gateway in 2002, and a new one was sorely needed since I’m rarely able to do more than one thing at a time (I believe the kids call this “multitasking”) on the present one due to its skimpy memory.  I am looking forward to the arrival of the new PC with a mixture of excitement and dread—the “dread” part is because it is equipped with Windows 8, which I have heard from countless numbers of people is the Prince of Darkness’s operational system of choice.  I got a pretty good deal on the computer (it’s a HP Envy 20-d030 TouchSmart All-in-One) but it wound up draining pretty much everything in my credit union account so I’m temporarily low on funds for a while.  How low, I hear you asking?  (And to be honest…that’s being kind of nosey…)  Well, my father offered to spring for a transfer cable—a rare offer of generosity that forced my mother to lie down for a few minutes—in order to make it easy to move some of my files on the old PC to the new one, it says here. 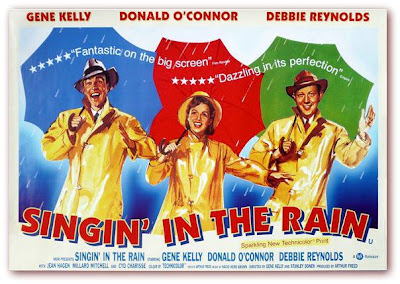 The reality of being skint (as they say on the other side of the pond) also means that I’ll have to miss the premiere of the Summer Classic Movie Series at the ’s premiere movie revival house, the Ciné-Athens Bar-Café.  They’re going to kick things off on July 11 with Singin’ in the Rain (1952), a movie I would dearly love to see on the big screen (Mom made a face when I mentioned this, which just adds more proof that I was adopted).  After that, the schedule will be as follows:

I may have to miss out on SITR, but I am definitely planning to squeeze in a showing of The Searchers…and I might even check out Bugs’ birthday as well.

There are a couple of upcoming blogathons that are worthy of mention—and because TDOY is planning to participate, that makes it all the more worthier (that actually got past SpellCheck)… 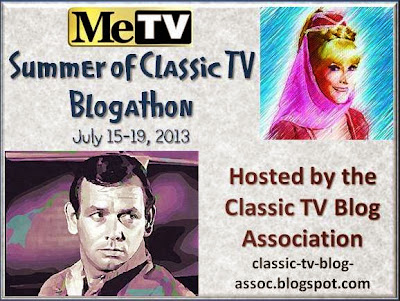 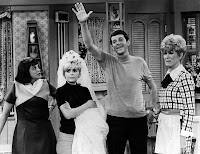 The Classic TV Blog Association will be hosting a swanky event in conjunction with my wife, Me-TV, entitled Me-TV’s Summer of Classic TV Blogathon from July 15-19.  You don’t have to be a member of that august body (even though they’re hosting it in July…nyuk nyuk nyuk…) to participate—but you do have to decide on a topic (if you plan to participate) by July 12.  The guidelines are very simple: the topic has to be on one of the shows currently showcased on the premier TV nostalgia channel…and it can be either an overview of the series, a profile on a member of the cast or just a favorite episode in general.  The CTVBA has already got a schedule of who’s in, and you’ll see that TDOY is on deck Wednesday, July 17 when I’ll take a look at one of the unsung sitcoms of the 1960s, The Mothers-in-Law. 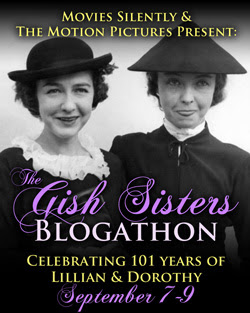 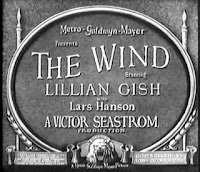 Movies, Silently announced this morning that they—along with Lindsey at The Motion Pictures—will host The Gish Sisters Blogathon this September 7-9 in honor of the 101st anniversary of Lillian and Dorothy’s motion picture debut.  The topics for discussion to participants are boundless: it can be a review of a film either sister appeared in (or both, if that strikes your fancy), an overview of their stage careers, a biography or anything else that is pretty much Gish-related.  (Your Gish is their command, in other words.  Okay, put the chair down…)  TDOY has RSVP’d, and I’ve decided that I’ll talk about one of the…well, I hesitate to use the word since it suffers from overuse—but “masterpiece” is really the only way to describe one of the finest of all features from silent cinema, The Wind (1928).

There is one additional blogathon I need to bring to your attention…but I’ll save the specifics for later this week, when I’ll have a Coming Distractions post up for in August.

And the last item on the agenda…back in June, I did a review of the recently released Accidentally Preserved —a disc that came to fruition thanks to the generosity of a number of people who funded the release through a Kickstarter project initiated by silent film accompanist and historian Ben Model.  Ben sent a note out to the Kickstarter backers this morning to deliver the sad news that he will not be using Kickstarter to raise money for an Accidentally Preserved sequel.

Now, now…dry those tears!  It’s because he doesn’t have to!  The response to the has been tres encouraging: through royalties of Amazon sales and the income Ben’s generated from selling the disc at various venues over the past month, enough revenue has been raised to produce a second volume of rare and/or lost silent film shorts.  (Ben writes: “I had to look at the numbers a few times myself to make sure I wasn't hallucinating...I wasn't.”)

It’s a little premature to announce when Accidentally Preserved II: Texas Blood Money will be ready…but Ben guesstimates it will either be by the end of the current year or early in 2014.  He thanked everyone for the positive word of mouth (posting about the disc on either Facebook or Twitter, blog articles/reviews, etc.) and I for one am pleased as Hawaiian Punch that a second of cinematic rarities will be a go without having to pass the hat around.  As always, I will keep you posted when I hear breaking news.

If computers were cars, you'd be trading in your 1927 Franklin for a 2013 Ford Focus. I was going to write "1928 Porter," a la "My Mother The Car," but I'm not sure the Porter was an actual automobile make. (I know the Franklin is real, since it was produced in my hometown of Syracuse, N.Y.) Welcome to modern times.

As far as Windows 8 being "evil," that title better applies to Windows Vista. (And Microsoft is introducing Windows 8.1, to assuage those who prefer the old-style "start" button.)

I was going to write "1928 Porter," a la "My Mother The Car," but I'm not sure the Porter was an actual automobile make.

Got to come clean, VP...I would have laughed harder at the Porter joke (and probably started singing the theme song). But you are right, the Porter was a made-up car.

As far as Windows 8 being "evil," that title better applies to Windows Vista.

Well, the people telling me about Windows 8 are people who are prone to dislike anything from Microsoft, so I have been tempering their opinions somewhat. Brian at Films From Beyond the Time Barrier told me on Facebook: "...it's like playing with colorful blocks all day long. You will either tap into new wellsprings of child-like creativity, or regress to an infantile state."

So all the time I've spent with my nephew on the Lincoln Logs and Legos should help me with this. And if not...well, don't be surprised if a lot of my posts consist of "Goo."

So all the time I've spent with my nephew on the Lincoln Logs and Legos should help me with this. And if not...well, don't be surprised if a lot of my posts consist of "Goo."

As long as you don't feed any to Joy Harmon; we know what that stuff does to her.

I'm happy you got a new computer. I bought an all-in-one last month. I love the space savings and no more cables. I don't think it'll last 11 years though. They generate a lot of heat inside the case, so I use a fairly aggressive "sleep" setting (1/2 hour) since I leave it on all the time.

Speaking of Texas Blood Money, this is soooo off topic but I want to share it anyway: the Mountain Goats' first album was called Taboo VI: The Homecoming. It appears I am genetically predisposed to bond with anything that utilizes the Horror Movie Title With Roman Numeral: Vaguely Sinister Phrase for Secondary Title construction.

The Wind is indeed one of the finest films I have ever seen. I am anxiously looking forward to your post, I cannot wait.