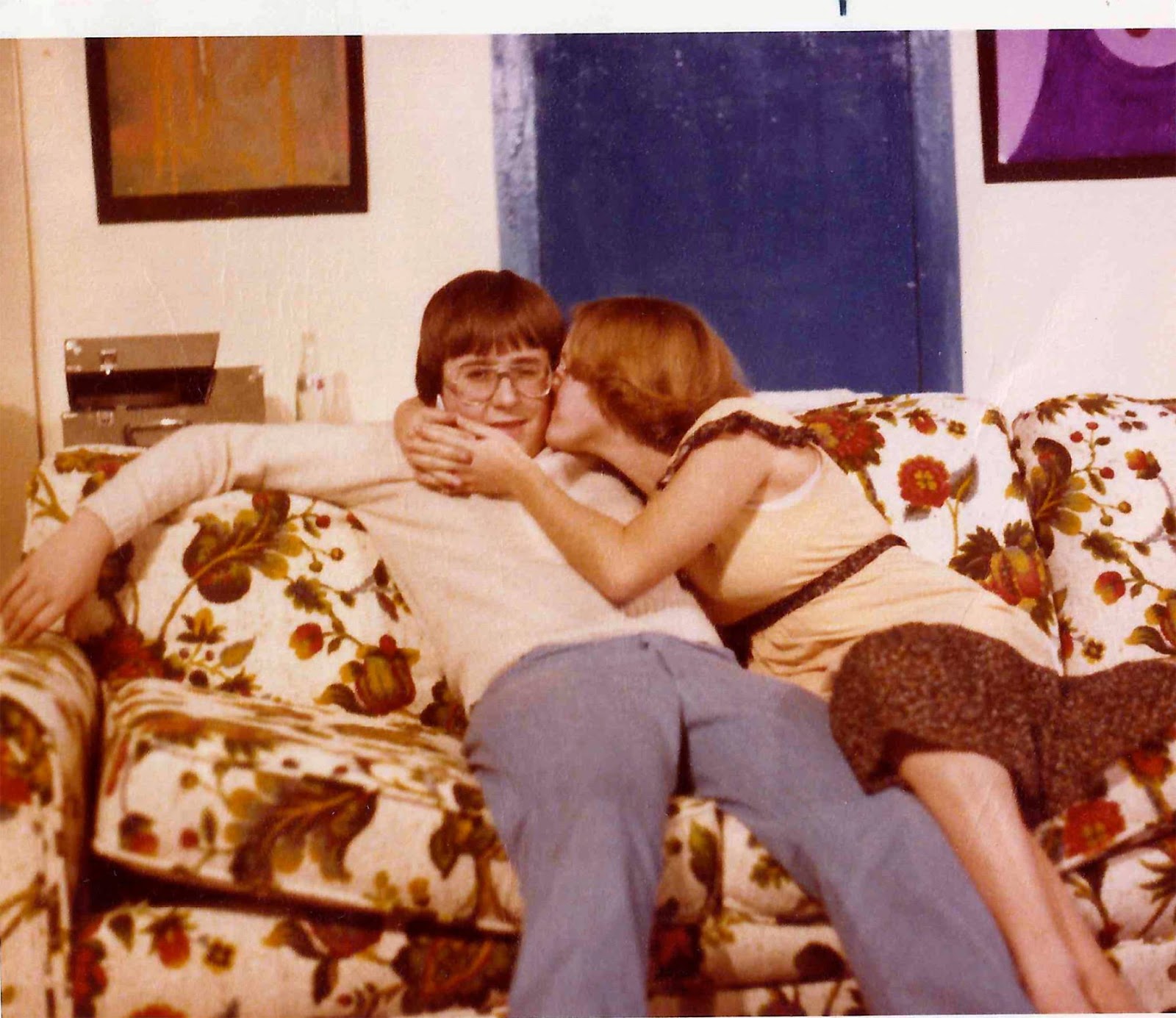 A few people who I invented for the purposes of this blog post fictionally e-mailed me to ask about my illustrious career as an ACT-or! during my four year existence in Ravenswood Penitentiary High School.  The above photograph is a publicity photo taken for a play I was in during my freshman year, a production of Peter Shaffer’s Black Comedy.  The woman nibbling on me posted this on Facebook a week or so ago, much to my surprise in that I was told the negatives would be destroyed once the check cleared.

For those of you not familiar with Black Comedy, you can check out the Wikipedia entry here.  For those of you who’d rather not, the play is a farce in which an impoverished artist has swiped furniture from his neighbor’s apartment and furnished his own digs in order to impress his fiancée’s father…but the neighbor arrives home early for the weekend, and so said artist must return the furniture in complete darkness because—surprise!—the electricity is out in the building.  Complicating matters is the arrival of the artist’s slutty girlfriend, who decides to have a little fun in the dark—though not in the way you dirty-minded people are thinking right now.

When the play opens, everything is presented in darkness…and when the lights “go out,” the production is suddenly illuminated so that the audience is able to see what’s going on even though it’s supposed to be taking place in pitch black.  Several people in the audience at these performances never did catch on to this (well, it was Ravenswood—the town who felt a second stoplight was too “progressive”) and to make things worse, our drama teacher wanted us to wear blindfolds while performing the play because he felt we weren’t convincing enough playing people fumbling around in the dark.

I thought this was kind of an idiotic idea—and my suspicions were confirmed when during rehearsals one of my blindfolded co-players nearly stuck a lighted match up my nose (it’s not easy blowing out matches while blindfolded, folks).  Further validation came in the form of the same audience members who didn’t understand the premise of the play asking me: “So why were you blindfolded?”  During one performance, I decided to see if I could get a reaction out of the director by purposely falling off a riser and landing in a recliner below.  The gasp from the audience was very gratifying (I felt like Buster Keaton for one brief moment) though my mother later groused: “You could have broken your neck!”—a refrain with which I was quite familiar ever since my tree-climbing days. 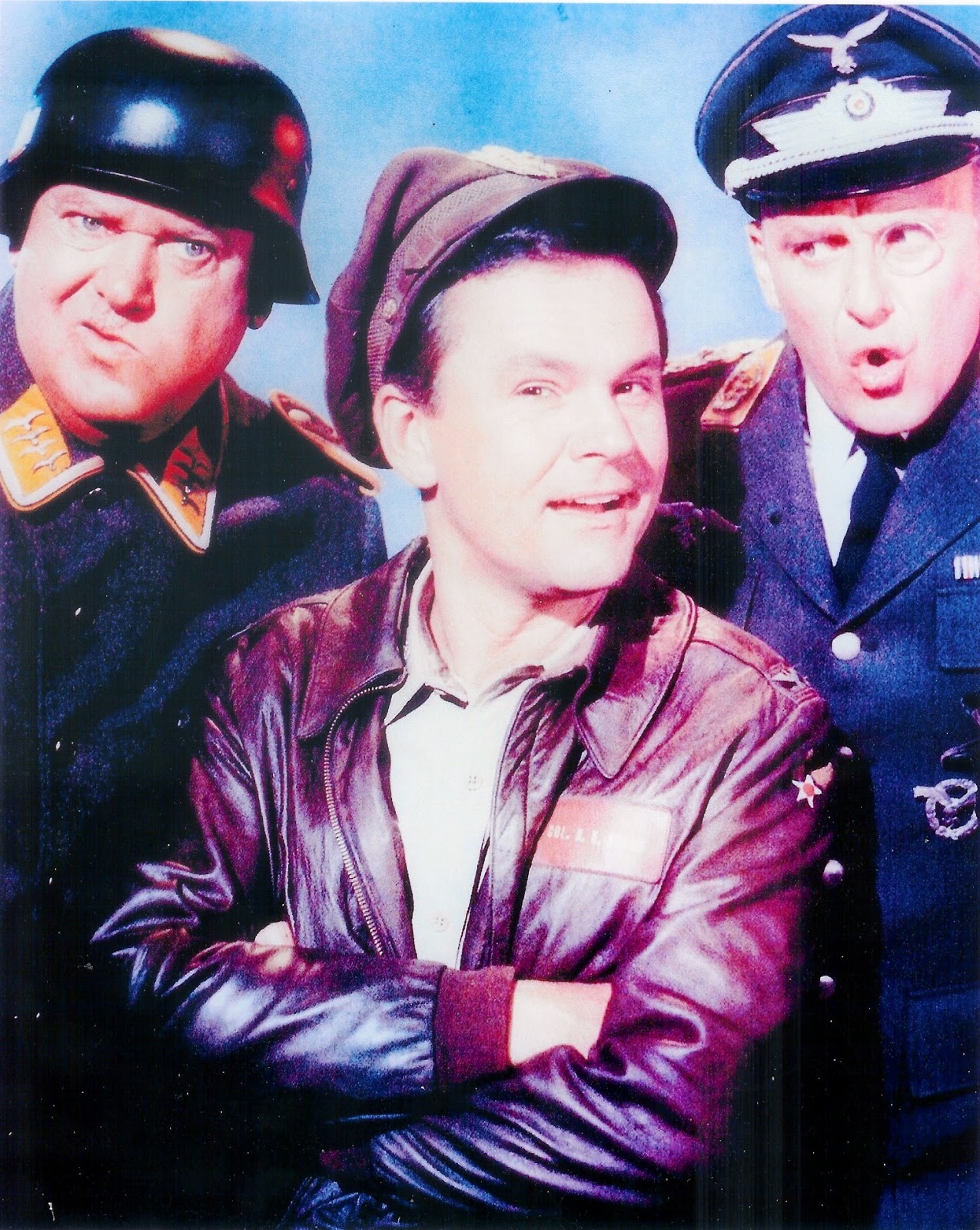 To add insult to injury, I was cast in the leading man role in this one...and I just wasn't able to make it work.  I was originally supposed to play a German electrician (all those years of watching Hogan's Heroes reruns paid off) but the instructor asked me to take the lead when the first actor had to bow out for forgotten reasons.  (I guess my teacher thought all those years of Monty Python's Flying Circus reruns would pay off as well.)  But a man's got to know his limitations, and I really sucked as the artist.  I kind of cooled it as far as high school plays went (I wouldn't appear in another production until my senior year).

Well, enough sharing.  There are a lot of doin’s going on this week in the House of Yesteryear.  For starters, over at the Radio Spirits blog, there’s cake and ice cream in celebration of what would have been the 102nd natal anniversary of actor Raymond Edward Johnson.  The respected radio thespian emoted on such series as Cloak and Dagger, Crime Club, Don Winslow of the Navy (“...anchors aweigh…”) and Mandrake the Magician—but he’s best remembered as the first host of Inner Sanctum Mysteries from 1941 to 1945.

After months of sawing, sanding and pounding nails, the new ClassicFlix site is finally taking shape—and there are a number of fine articles and reviews (with more to come) already in place written by longtime friends of Thrilling Days of Yesteryear.  I encourage any and all to peruse the new digs and leave a comment if you desire—I’ve even got a look at the 1948 noir Pitfall in what will be a continuing series highlighting neglected little cinematic gems on DVD (entitled Where’s That Been?).

With the barn raising of the new ClassicFlix, I’m going to issue a caveat here and say that the activity at TDOY may not be as vigorous as it has in the past because of my new duties and all.  Hopefully the ClassicFlix Community will be able to fill in the void—particularly we’ve got a splendid stable of writing talent.  Meeting adjourned!
Posted by Ivan G Shreve Jr at 8:00 AM

You're a better man than I, Gunga Din. Last time I was on stage was the elementary school Christmas play, and even though Richard Nixon was still president at the time, it's not long ago enough for me.

That's impressive. I didn't make it past playing the Cowardly Lion in the 4th grade production of The Wizard of Oz.

Ha! I really enjoyed reading this. Too bad you didn't star in other productions just so we could hear the tales now. You haven't really changed that much from your photograph either, except for that bushy beard. ( Lucky you, I'm not wearing my glasses ). I see I'll have to check out ClassicFlix too...Best Years of Our Lives came out on BLU-RAY and nobody told me about this???