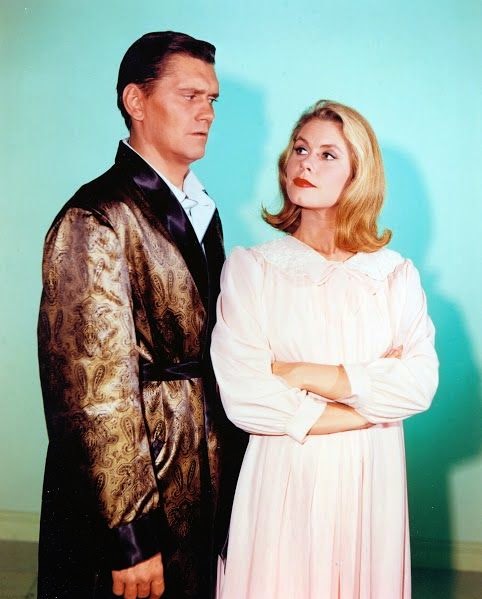 This past September 17th marked the fiftieth anniversary of the TV debut of Bewitched, the phenomenally popular fantasy sitcom chronicling the happy-ever-after of married couple Samantha (Elizabeth Montgomery) and Darrin Stephens (Dick York, Dick Sargent).  For the benefit of those of you who’ve been in a state of Rip Van Winkle suspended animation all this time, the hook of the long-running ABC series (1964-72) was that Samantha was a witch and Darrin a mortal, and in between the fantastic elements of the show (magic spells, etc.) was the subtle observation that while “mixed marriages” were fraught with complications, these problems could be addressed and eventually overcome with doses of love and tolerance.

The show was created by veteran OTR writer Sol Saks (Duffy’s Tavern, The Adventures of Ozzie & Harriet), whose only job after crafting the pilot apparently involved jogging down to the mailbox every now and then to pick up what was surely a substantial check.  It has been noted that two movies inspired Bewitched: one being 1942’s I Married a Witch (starring Fredric March and Veronica Lake) and the other 1958’s Bell Book and Candle (with Kim Novak and James Stewart).  A half-century after the program’s debut, Bewitched continues to enjoy popularity in retirement; it airs (as of this writing) twice a day in hour-long weekday blocks on Antenna TV (at 11am and 7pm) and an additional hour (8pm) on Saturdays. 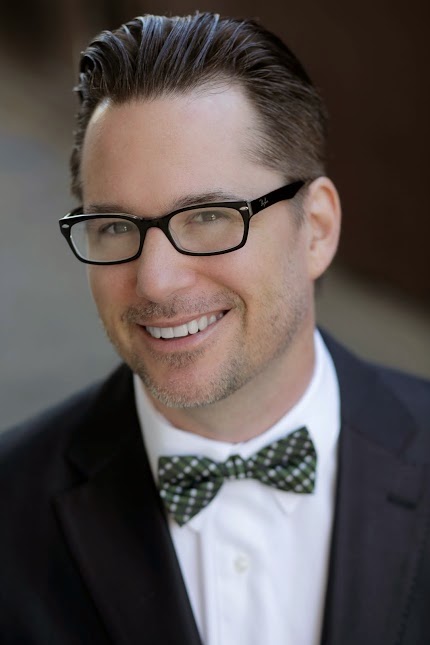 I kicked off this post with a little background on Bewitched only because The Bewitched Continuum: The Ultimate Linear Guide to the Classic TV Series states upfront that it’s not intended to focus on the history of the television show (lengthy cast member bios, behind-the-scenes production details, etc.).  There are other books that cover that subject in swell detail, and we invite you to peruse the shelves of your friendly neighborhood bookstore in your quest.  Instead, author Adam-Michael James has taken advantage that with the sitcom’s entire run released to DVD (which began in 2005 with the debut of the first season), an opportunity is presented to dissect each of the series’ 254 episodes and ask the naggingly important questions.  How is it that Samantha is able to cast a spell in one episode and powerless to repeat the same feat in others?  What rules guide the casting and uncasting of these enchantments?  (As the book explains, this principle is fairly flexible.)  Through the magic of DVDs, James is able to put each installment under a microscope and thoroughly explore the inconsistencies. 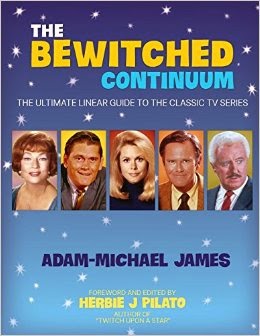 I realize that as someone who’s had similar fun doing this on the blog with such sitcoms as Mayberry R.F.D. and The Doris Day Show, I’m sort of throwing stones at a glass house when I say that a lot of this comes off as a bit pedantic.  Bewitched was a TV show, not a documentary—and what’s more, it was a TV show that depended on a rather fantastic premise, so there’s bound to be contradictions and irregularities from time to time.  (A show like Mayberry R.F.D. opens itself up to petty carping because it wasn’t meant to be fantasy—it just turned out that way).  In his defense, James admits that while some of this does fall under the category of nitpicking, he knows that much of this was dictated by the nature of TV production itself: episodes filmed out of order, etc.  In addition, you never doubt for a moment Adam-Michael’s genuine fondness for Bewitched, a classic that cast its spell (oh, come on—you knew the pun was coming) over him when he first watched it in syndication in 1977.  (I feel uncomfortable dating myself, but I’m old enough to remember watching it while it was still on the air.) 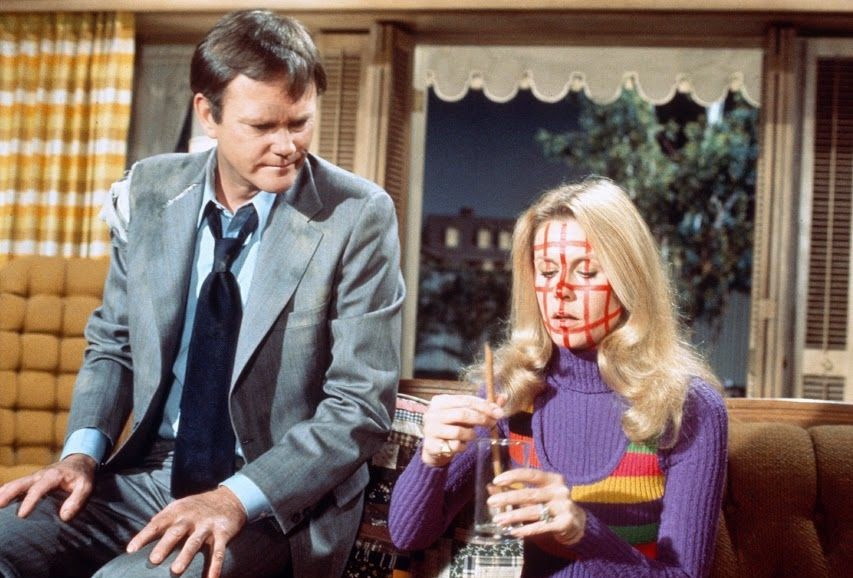 For me, the more interesting aspects of The Bewitched Continuum are the meticulous tabulations of its arcane trivia.  Darrin’s mother-in-law Endora (the incomparable Agnes Moorehead) had a tendency to refer to him as “Durwood” a lot (133 times) but there are fourteen occasions when she gets his name right.  There’s also a tally of how many times Samantha blurts out her trademark “Well?” and Larry Tate’s (David White) references to Darrin as a “son of a gun!”  In addition, the reader is provided a database of the clients who advertised with McMann & Tate, plus a list of transformations (who gets turned into what) and so much more.  James’ list obsession even includes his picks for best and worst episodes; he lists “Allergic to Ancient Macedonian Dodo Birds” in his best Top Ten (as #7; it’s #1 among my favorites) and “Samantha’s Secret Saucer” in his worst list (ranked #6).  “Secret Saucer” has my vote as the all-time worst; the first time I saw this as a kid I probably did my first eyeroll (and kids are not particularly well-known for their discriminating tastes in television). Adam-Michael also offers up an interesting bit of speculation on how he believes the sitcom should have wrapped things up (the show never had the opportunity to do a “final episode”).  He’s a little more optimistic than I would be regarding the ultimate fate of the characters, believing that Samantha and Darrin’s union (and the whole witch relatives thing) would eventually be accepted by the series’ supporting characters (the Tates, the Kravitzes, etc.).  I’m a little more pessimistic about the nature of prejudice and the human condition, and wouldn’t have been a bit surprised if during Bewitched’s series finale witch burnings broke out en masse at Morning Glory Circle (see The Twilight Zone’s “The Monsters are Due on Maple Street” for further reference). 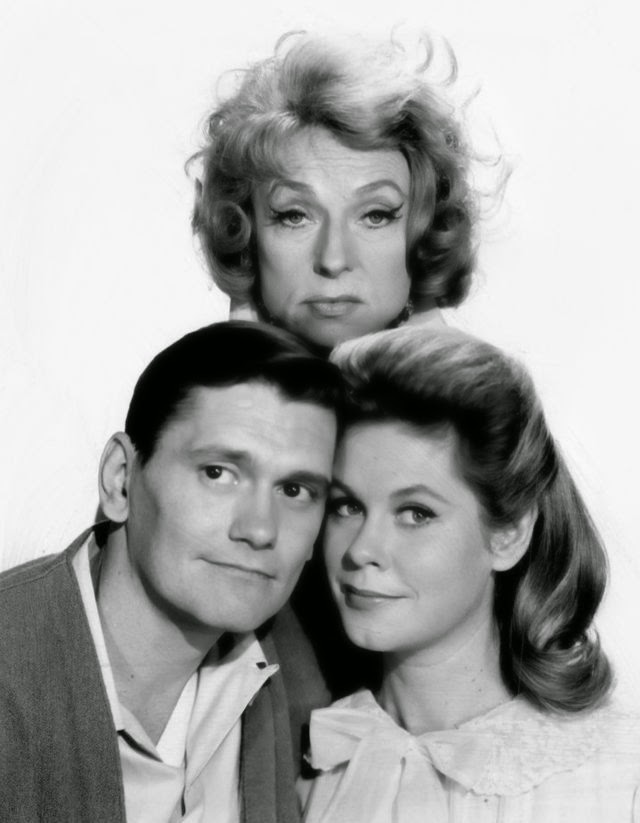 I need to issue a small caveat with regards to The Bewitched Continuum: since Bewitched ran for eight seasons and 254 episodes, coverage of same lends itself to a tome of New York City phonebook proportions.  (I’m sure our postal carrier, who is by no means the yardstick to measure the efficiency of the USPS, probably threw a tantrum delivering my copy…and my mother grumbled a bit when she lugged it into Rancho Yesteryear as well.)  But because I am a fan of Bewitched (despite what you may have heard from my BFF The Duchess and Brent McKee), I think Continuum is a great book and will most assuredly provide reading delight during hours of perusal.  (Many thanks to Laurel Lambert of the SPWR Group for furnishing me with a review copy, and for more information on the author and his projects click here.)
Posted by Ivan G Shreve Jr at 11:30 AM

Something that has stuck in my memory ever since I read it when it first appeared in print 50 years ago (in TV Guide?) was Sid Melton saying how a sitcom based on real people like Make Room for Daddy will outlast silly premises like being married to a witch.

You might be able to make a case for Sid's observation. Make Room for Daddy/The Danny Thomas Show was on the air longer than Bewitched (eleven seasons), and in fact the only reason the Thomas show left the airwaves was because its star wanted to hang it up (it was still a Top Ten hit in its final season).

Sadly for Sid, Bewitched has the edge as far as syndication popularity goes. And in a comparison of both show's last seasons, I think Bewitched had a bit more gas (I watched a few of those "lost" Danny Thomas shows on FETV this year and except for the ones with Bill Dana I don't recall chuckling too often).

My favorite nagging BEWITCHED question: which church could possibly have had both Samantha (a witch) and Gladys Kravitz (her faith should be fairly obvious) in attendance?

Considering that Samantha kept her powers a secret from most, it probably doesn't matter.

On the MAKE ROOM FOR DADDY vs. BEWITCHED syndication popularity: no doubt BEWITCHED has been rerun more, but is it due to the appeal of the premise, or the fact that BEWITCHED has well over 150 color episodes to air while DADDY's entire run is in B&W?

I DREAM OF JEANNIE, which has the majority of its run in color (one season in B&W), probably is a more popular rerun than DADDY as well.