Christmas swag and other items 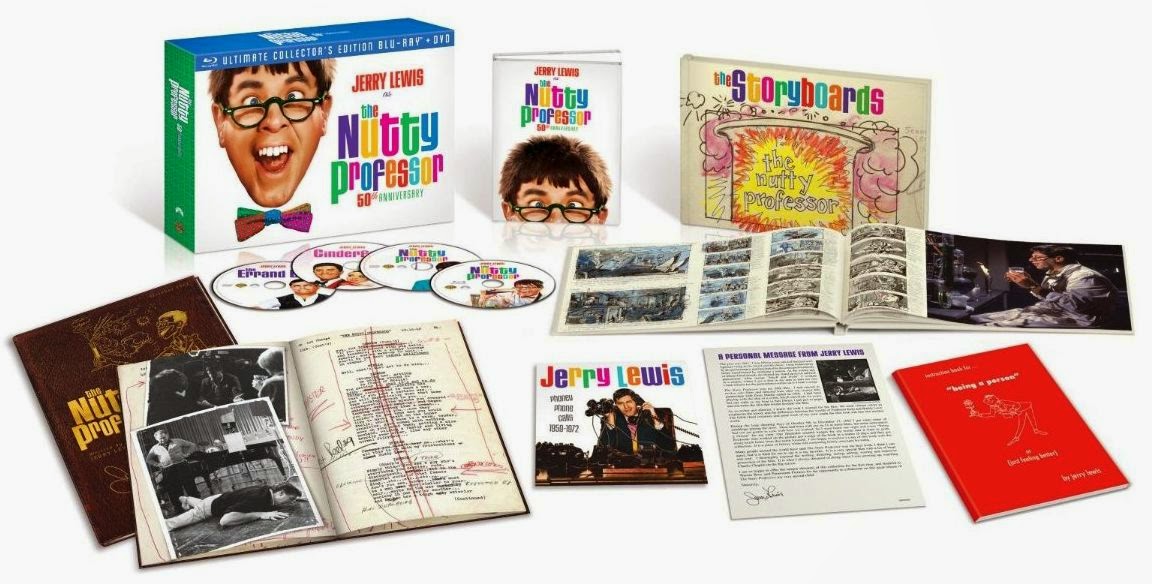 Unless I’m struck by an inspiration bolt from the blue within the next few days, this looks like it’ll be the last post here at Thrilling Days of Yesteryear in 2014.  I won’t lie to you—I was disappointed with my output on the blog this year, and the fact that there were 162 posts to last year’s 174 is proof that my intentions to work on TDOY a lot harder fell short of my personal goals.  I suppose I could offer up the defense that my other outside assignments (my latest “Where’s That Been?” entry is currently up at ClassicFlix) compete for my time…but who am I kidding?  Most of the time, my inactivity is due to just pure dagnasty laziness.

The lethargy and the holidays contributed to why I didn’t cobble together an edition of Serial Saturdays yesterday and why there won’t be a Doris Day(s) tomorrow.  We had an exceptionally grand Christmas; my sister Debbie, her husband Craige and my niece Rachel visited for the occasion and they presented me with enough Amazon gift card largesse to be able to purchase a Blu-ray player for our main TV in the living room (we’ve not been able to watch DVDs since I moved the DVD recorder back to my boudoir—and I don’t have the right cordage to hook my spare DVD player up, since it’s an older model).  The Double K’s sent me the Collector’s Edition Blu-ray/DVD set pictured at the beginning of this post and this replica of a major award… 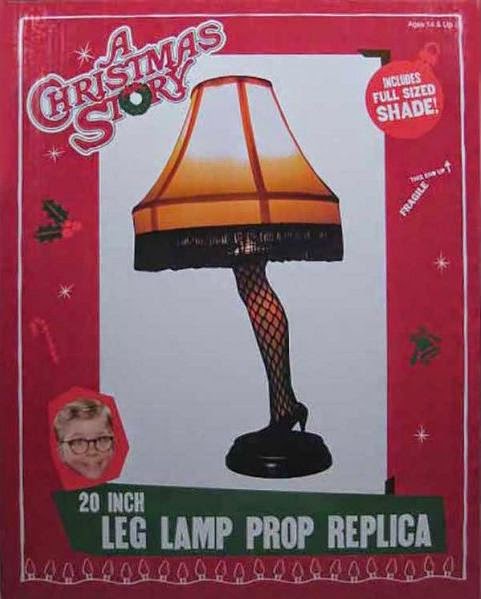 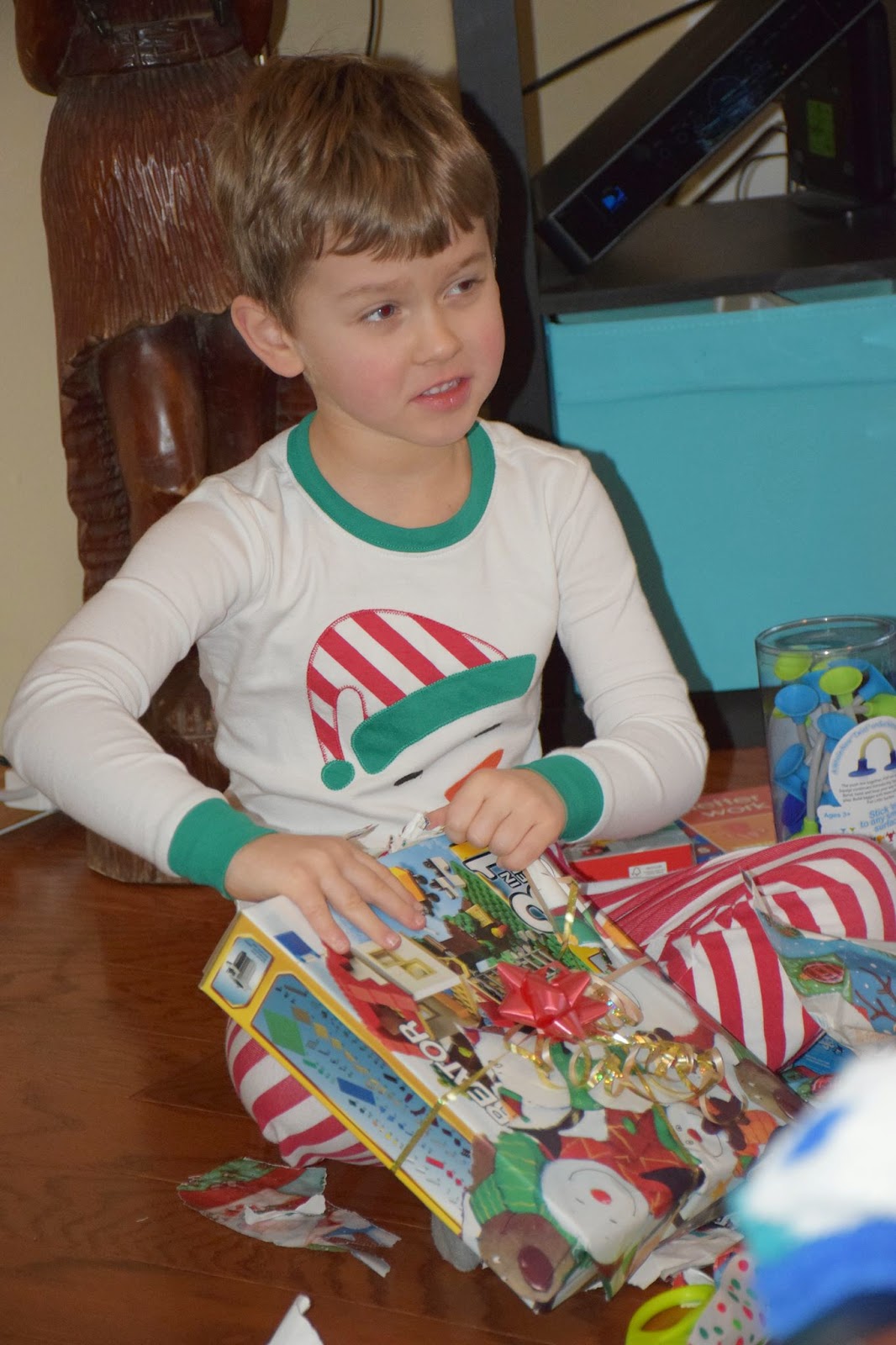 …and my nephew Davis (seen here opening up the Lego Treehouse I sent him) gifted me with an Elvis ornament which plays I’ll Be Home for Christmas very loudly when you press a button so I’ve only pressed it once.  Mi madre got me a copy of Showbiz Politics: Hollywood in American Political Life and a Darden Restaurant gift card…which, coupled with the Red Lobster gift card she received from sister Debbie—and some Olive Garden cards she already had on hand—means that we’ll be taking my Dad to Longhorn for twenty-pound butt steaks (with lobster chasers) on his birthday in February.

Also, too: there were mimosas.  Many mimosas.

I learned during my sister’s visit that she has been furthering my niece’s classic movie education: Debbie took Rach to see Gone with the Wind (1939) on its 75th anniversary showing in December and Rach thought it quite good.  (Well, she’s young.)  Rachel was also inducted into my mother’s adoration for The Lone Ranger; she watched with “Nana” some of the reruns on FETV and pronounced them tres awesome.  FETV ran the first three LR “origin” episodes Friday, but Rach didn’t get to see those—I told her I’d send them on to her because I had them on DVD.  “Of course you do,” she cracked, followed by a rimshot.  (I also gave her a copy of the Radio Spirits collection Six Gun Hero that I wrote the liner notes for a while back, so that she could experience the radio Ranger and also brag on her uncle a bit.) 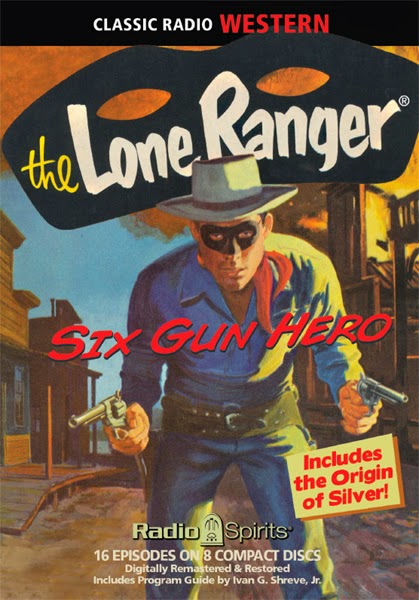 Los Parentes Yesteryear and I watched a Lone Ranger repeat Friday night that I have to tell you about: the title is “Sawtelle Saga’s End,” which originally aired on March 24, 1955.  You have two outlaw brothers, Peter (Peter Hanson) and Benjamin (Robert Foulk), who are responsible for a perplexing series of payroll robberies in and around the town of Sandstone—the only reason why they’ve not robbed the Sandstone Wells Fargo office is because Sandstone is their home base of operations, and they don’t want the heat of being under investigation.  They return to their hideout—the Sawtelle Ranch—where we learn that they’re merely the henchman of the real brains of the outfit… 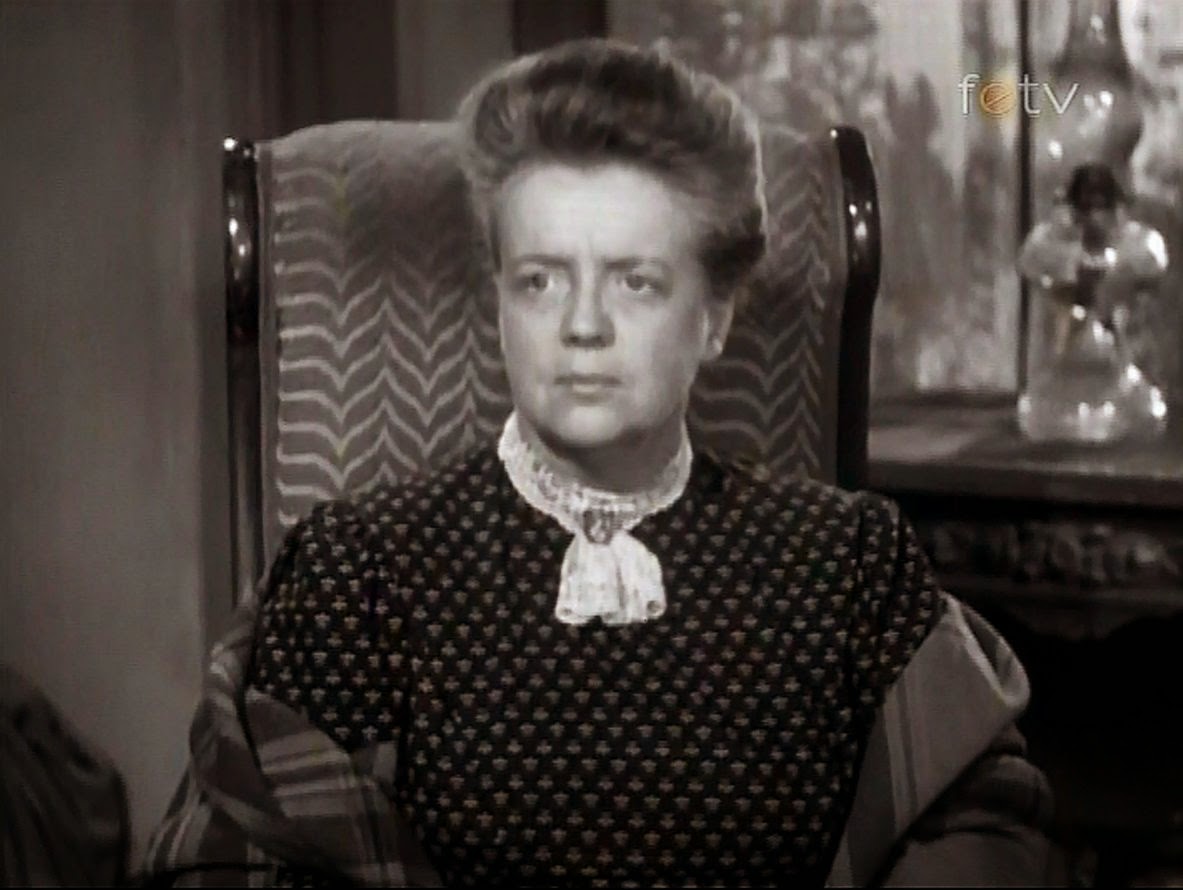 “Aunt” Maggie Sawtelle, played by none other than Frances Bavier.  When I caught sight of her I shouted “I knew it!”—because I have posited during many a previous write-up on Mayberry Mondays that Beatrice “Aunt Bee” Taylor was twisted and evil, yet with nothing truly substantial to back up my assertions.  Aunt Maggie has instructed her nephews (they’re redopted, by the way) in a life of crime and is getting ready to pull out of Sandstone…but she directs “her boys” to rob the Wells Fargo office before they skedaddle.  Andy Griffith Show fans will really get a kick out of this episode: Bavier’s kindly persona is mostly an act to stave off any suspicions of her true identity as a criminal mastermind (“Why don’t you wash your neck now and again,” she scowls at Peter.  “My, but you’re an untidy boy.”) 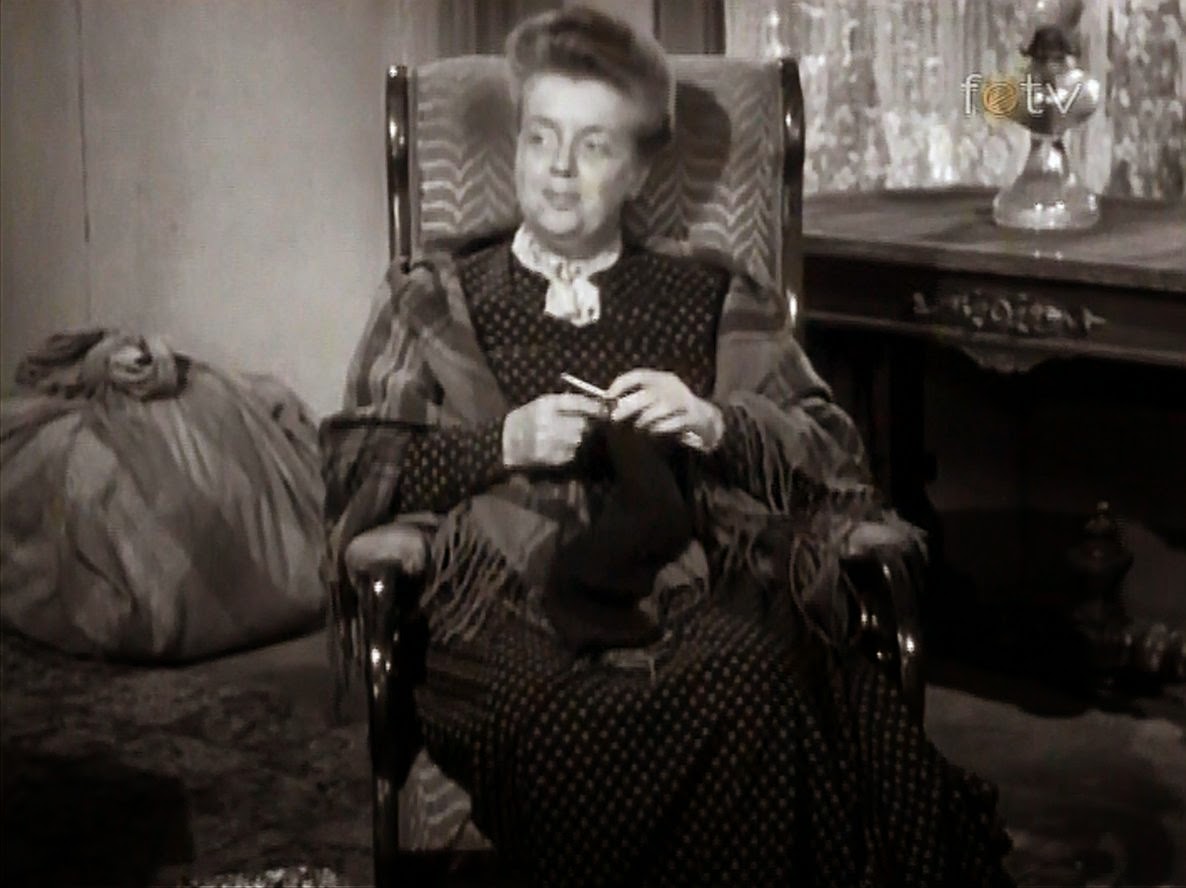 The Sawtelle boys carry out her instructions but Benjamin is wounded by the Ranger in their getaway…and though he’s tossed into the pokey, he’s not talking.  After chatting with—I swear I’m not making this up—Sheriff Taylor (William Forrest), the Lone Ranger and Tonto head out to Aunt Maggie’s to see if she has the skinny on what’s become of Ben’s accomplice.  (The Ranger says to Maggie “We’re friends of Sheriff Taylor’s” as means of introduction, much to my amusement.)  Maggie plays the innocent old lady in attempt to fool the two men—but though the Lone Ranger may have been born at night, it wasn’t last night; he saw quite plainly Peter’s horse outside on the way in.  So Maggie whips up a lie: yes, Peter was here but he left—she had no idea those boys were in such trouble! 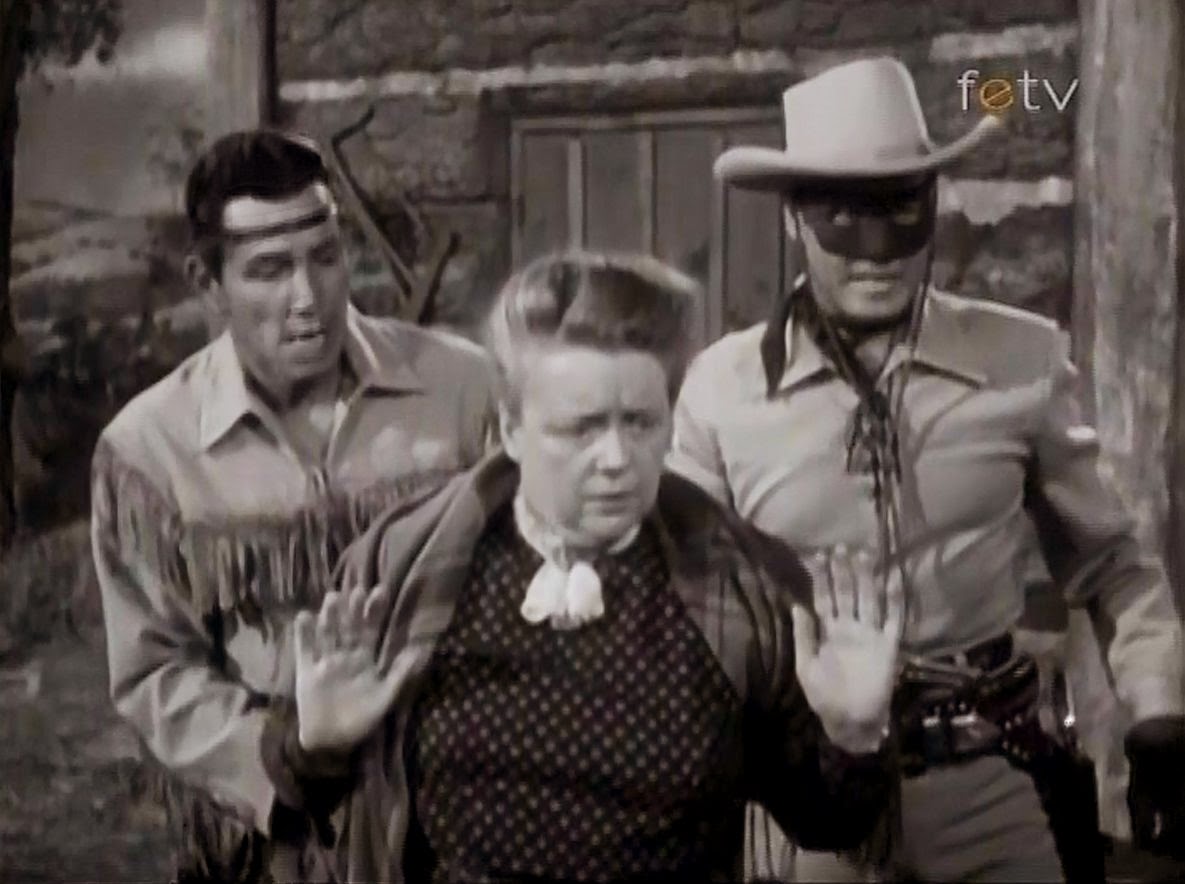 LR still isn’t buying it—Peter left his saddle behind on the outside horse—but by that time, Maggie’s got him and Tonto locked in a shed and she orders Peter to grab a kerosene lamp for the purposes of making that shed burn, baby, burn.  (A prospect that she, by the way, enjoys with unbridled glee—you can understand what Andy Griffith meant when he subtly suggested Bavier could be a real rhymes-with-witch at times.)  Our heroes escape via the roof (they chop an exit with an axe) and tackle Peter; while the Ranger gives the bandit a proper pummeling, Tonto has to deal with Maggie kicking his shins.  He then says to the Ranger in a line that had us all in hysterics: “Next time me take easy job—fight man, you fight woman.”

All in all, 2014 was a swell year—and I’m hoping 2015 is a most worthy sequel.  Special thanks to my BBFF for the hilarious card (and swell DVD present of Gunsmoke’s seventh season) as well as to Doc Quatermass, Kim, Rodney, the Kelleys, Laura, Brandie and Martin for the wonderful Christmas sentiments as well.  From all of us (the ‘rents and me) at Rancho Yesteryear—Season’s Greetings and a Happy New Year!
Posted by Ivan G Shreve Jr at 7:00 AM