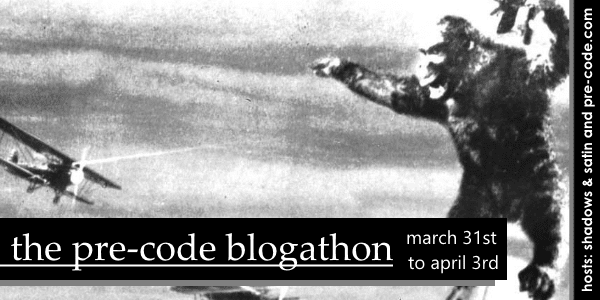 The following essay is Thrilling Days of Yesteryear’s contribution to The Pre-Code Blogathon, currently underway from March 31 to April 4 and sponsored by Danny at PreCode.com and Karen at shadowsandsatin.  For a complete list of participants and the films/topics discussion, click here. 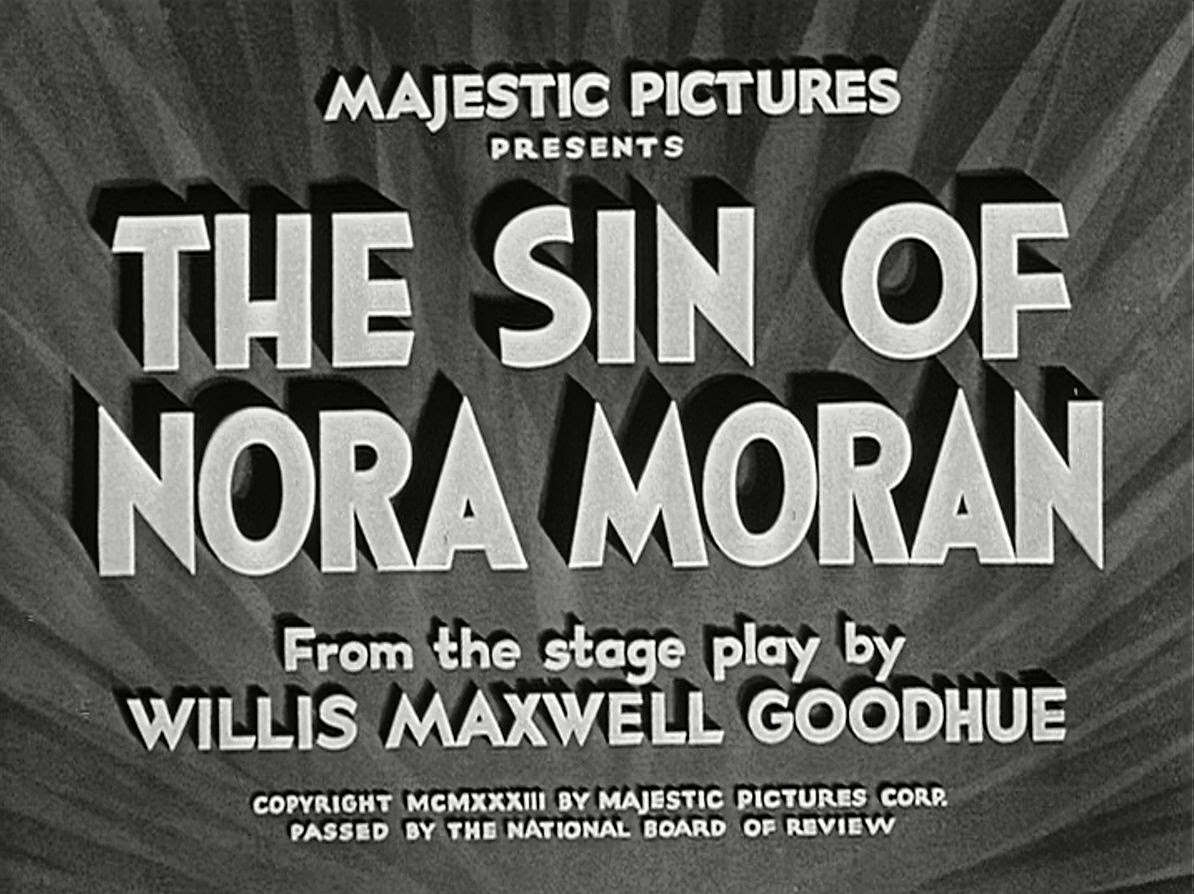 Nora Moran (Zita Johann) is a dead woman walking.  I wouldn’t blame you if you got angry at me for not giving you a spoiler warning, but the truth of the matter is: young Nora has been sentenced to die in the electric chair for the murder of her former boss, a brutish circus owner named Paulino (John Miljan).  Adopted by an elderly couple (Otis Harlan, Aggie Herring) as a young girl, Nora pursued a career in dance after the Morans were killed in a tragic automobile accident.  Upon graduating from the academy, Nora was long on determination but short on experience…so she wound up taking a job with Paulino’s circus when she was just about out of money.  The circus gig went swell for a while, until the ruthless Paulino forced his amorous intentions on her one night.  With money gifted to her from one of the other performers, Nora makes her way to the big city and into a nightclub job. 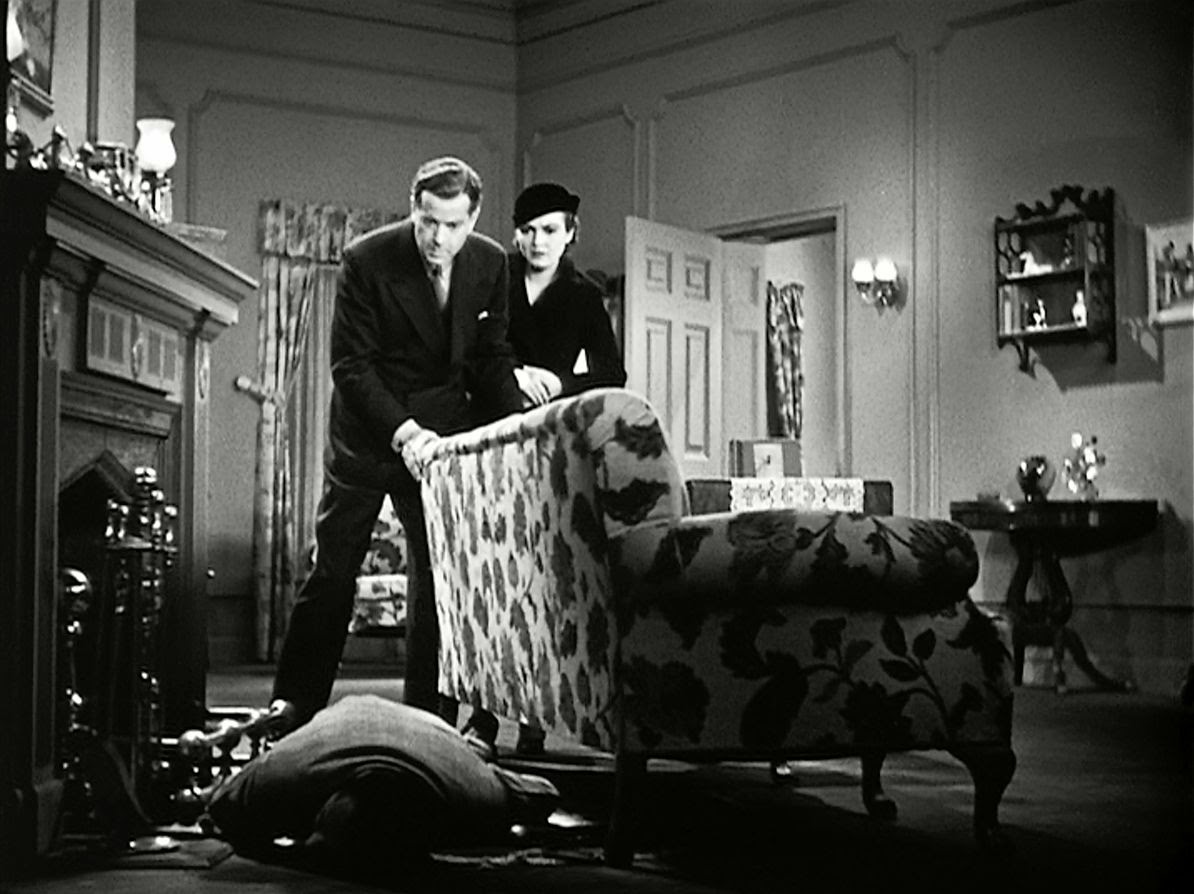 It is there Nora meets an ambitious politician in Dick Crawford (Paul Cavanagh)—though it would be more accurate to say that Dick’s ambition is more in the hands of his brother-in-law, District Attorney John Grant (Alan Dinehart).  Grant and his sister Edith (Claire du Brey) want to see her husband take the oath of office as the state’s governor…and that’s going to be difficult when Nora is seeing the would-be guv on the side.  D.A. Grant confronts the couple one night with their extracurricular romantical activity…and Nora, not wanting to scotch Dick’s political career, pretends that Dick is just one of many in a long line of suitors.  Dick bolts from their domicile, followed by John—yet when John returns, he learns from Nora that the circus is in town…and that’s Paulino lying dead on the floor.  To protect Dick’s reputation, Nora and John concoct a scheme to dispose of the deceased Paulino…but it doesn’t quite work out the way they planned, which takes us back to Paragraph One. 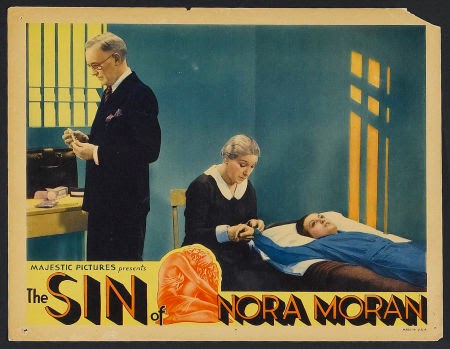 Based on the short story/stage play “Burnt Offering” by Willis Maxwell Goodhue (who co-wrote the screenplay with Francis Hyland), The Sin of Nora Moran (1933) was described by the late, great John Cocchi in his invaluable reference book on B-movies (Second Feature) as “a completely bizarre, fascinating, stream-of-consciousness presentation, the best independent feature of the Thirties.”  It’s why “the great reveal” that I described in the previous paragraphs really won’t take away any of your enjoyment in watching this offbeat picture.  Just when you think you know what’s coming…there’s still a surprise or two up its celluloid sleeve. 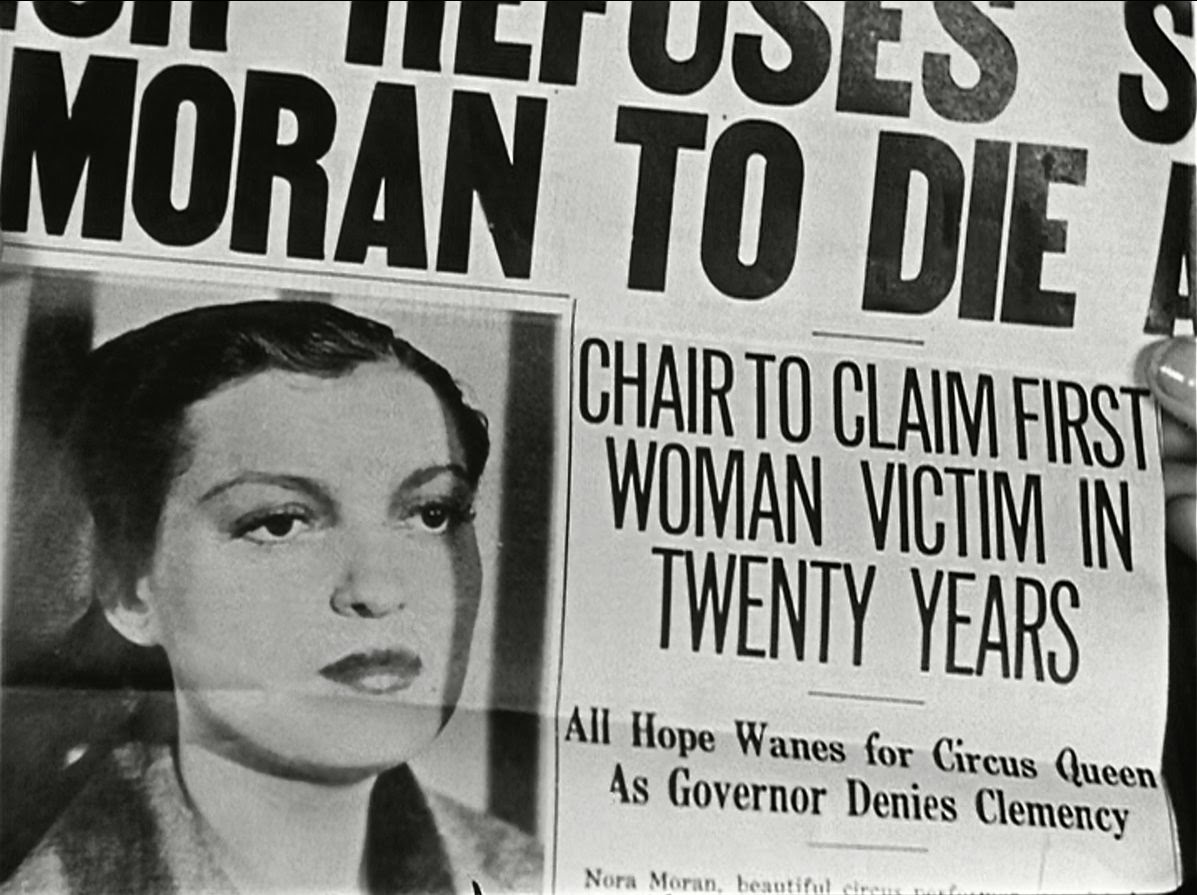 Nora Moran was produced at Majestic Pictures, a Poverty Row independent that had a reputation for making better-than-average programmers; one of Majestic’s fondly remembered pictures, The Vampire Bat (1933), was filmed on Universal Studio sets and spotlighted an impressive cast that included Lionel Atwill, Fay Wray and Melvyn Douglas.  Majestic’s modus operandi: cast a few up-and-coming actors along with some past-their-prime veterans and take advantage of location space whenever possible.  (A large portion of Nora Moran was purportedly filmed at the Mack Sennett Studios at Silver Lake in Los Angeles.) 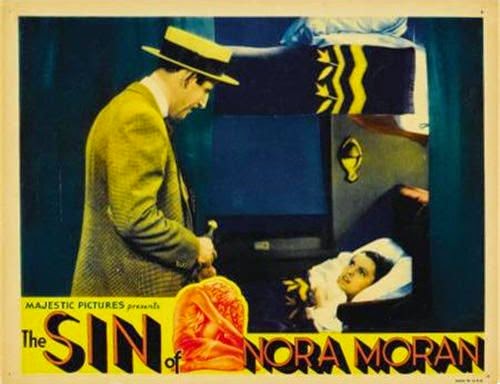 In the director’s chair on The Sin of Nora Moran was Phil Goldstone (the producer of the aforementioned Vampire Bat).  He had a fairly prolific career as a director in the days of silent cinema, but by the time the talkies came roaring in, Goldstone had settled into the role of producer, and even played a part in forming the Independent Motion Pictures Producers Association (IMPPA) in 1932.  MGM hired him to do some production work in the mid-1930s, so he called it quits with his directorial career following the anti-syphilis tract Damaged Goods (1937).  It is a pity that Goldstone abandoned motion picture directing because Nora Moran is proof that the man certainly possessed a style that transcended most independent quickies of that era, in that many are often turgid and dull.  Goldstone, to steal a famous observation that John Landis once made about the legendary Edgar G. Ulmer, “made chicken salad out of chicken shit.” 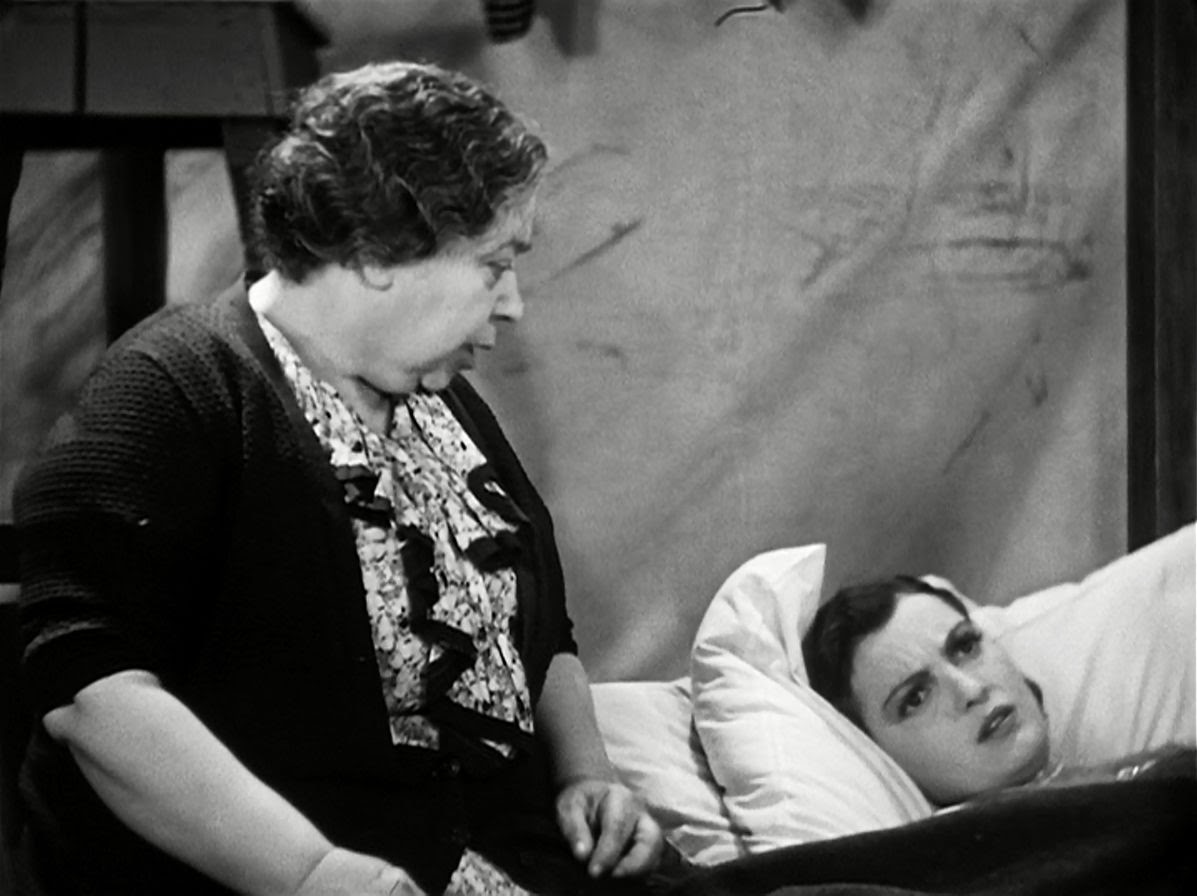 The strength of Nora Moran lies in its narrative technique: we learn the tragic story of our heroine through flashbacks, told in three separate points-of-view by Nora, Grant (who narrates the bulk of the picture) and Dick (in a letter that Grant reads to Edith).  It’s Nora’s reminiscence of the events that proves most interesting; after being given a sedative hours before she is to be executed (the preparations for which are outlined in a series of fast camera shots focusing on the prison employees who do the grunt work), her life story is replayed in a dreamlike fashion.  But when she thinks back to that time when her circus pal Sadie floated her a C-note so that Nora could escape her situation with Paulino, Sadie is reluctant to give her the money.  After all, if Sadie holds out on the hundred bucks, the wheels set in motion for Nora’s relocation to the big city will come to a screeching halt. 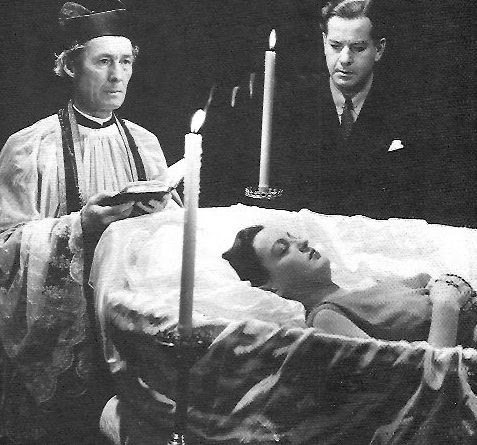 Sadly, Nora is unable to change her destiny with Sadie’s money any more than she is able to stave off the inevitable evening she’s spending with Dick.  Circus music outside reminds her of the tragic events to come, and she pleads with Dick to leave.  Then the doorbell rings, and knowing that it’s Grant at the door, Nora decides not to open it.  Alas and alack, she’s unable to change her destiny.  Dick experiences a similar situation when it’s his turn to recollect what happened to Nora: he has a vision where he and Grant are standing over Nora’s corpse as Father Ryan (Henry B. Walthall) says a prayer.  His attempt to stop Nora’s execution finds him distracted by her disembodied head visiting him in his office, assuring him that everything will be all right. 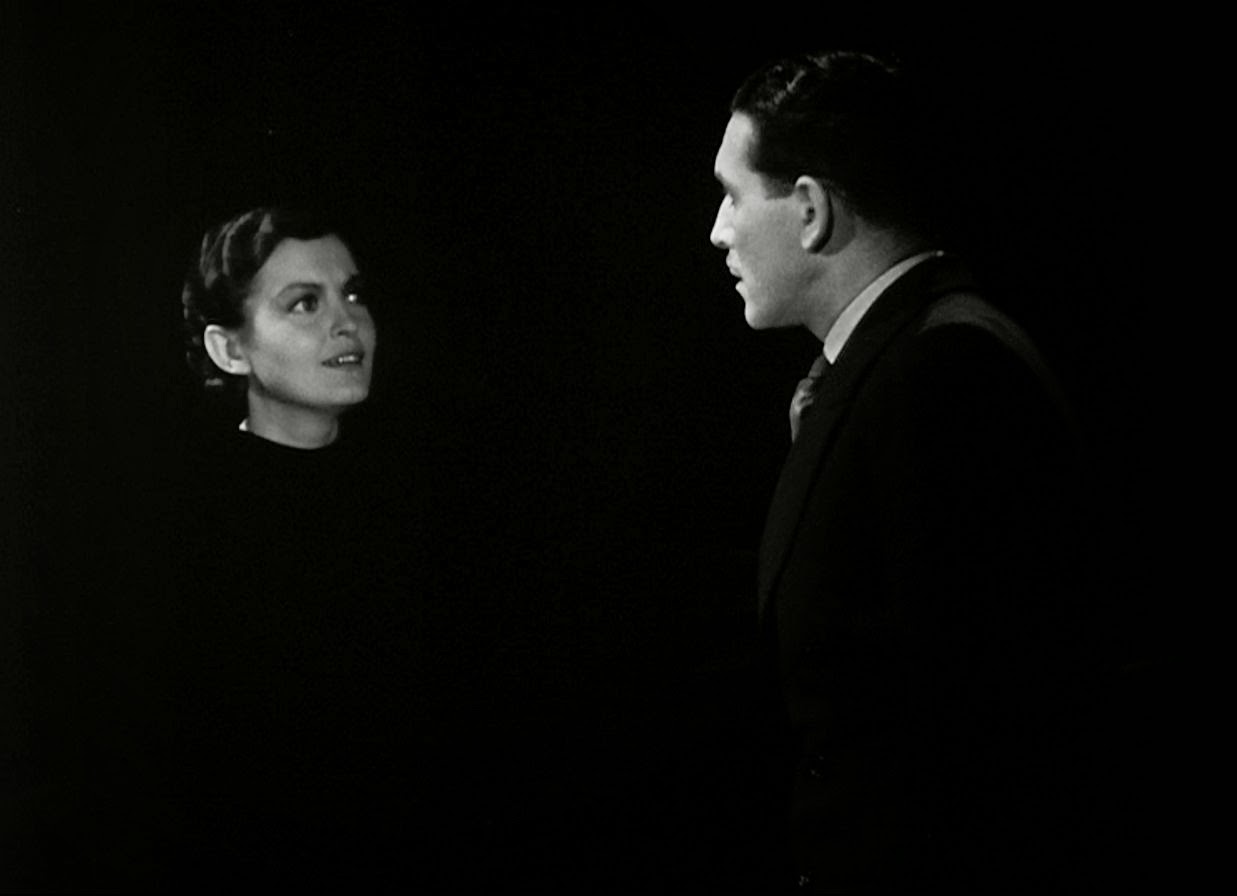 This innovative flashback technique with multiple narrators was reworked in Citizen Kane (1941), and while it’s been suggested that borrowing it for Kane might have originated with the fact that actress Johann was married to John Houseman at the time Nora Moran was in production, more than a few critics noticed that it was similar to that in The Power and the Glory (1933), a Fox release that came out at about the same time.  The montage work on Nora Moran is also quite impressive, even if they did go a bit heavy on the stock footage from time to time. 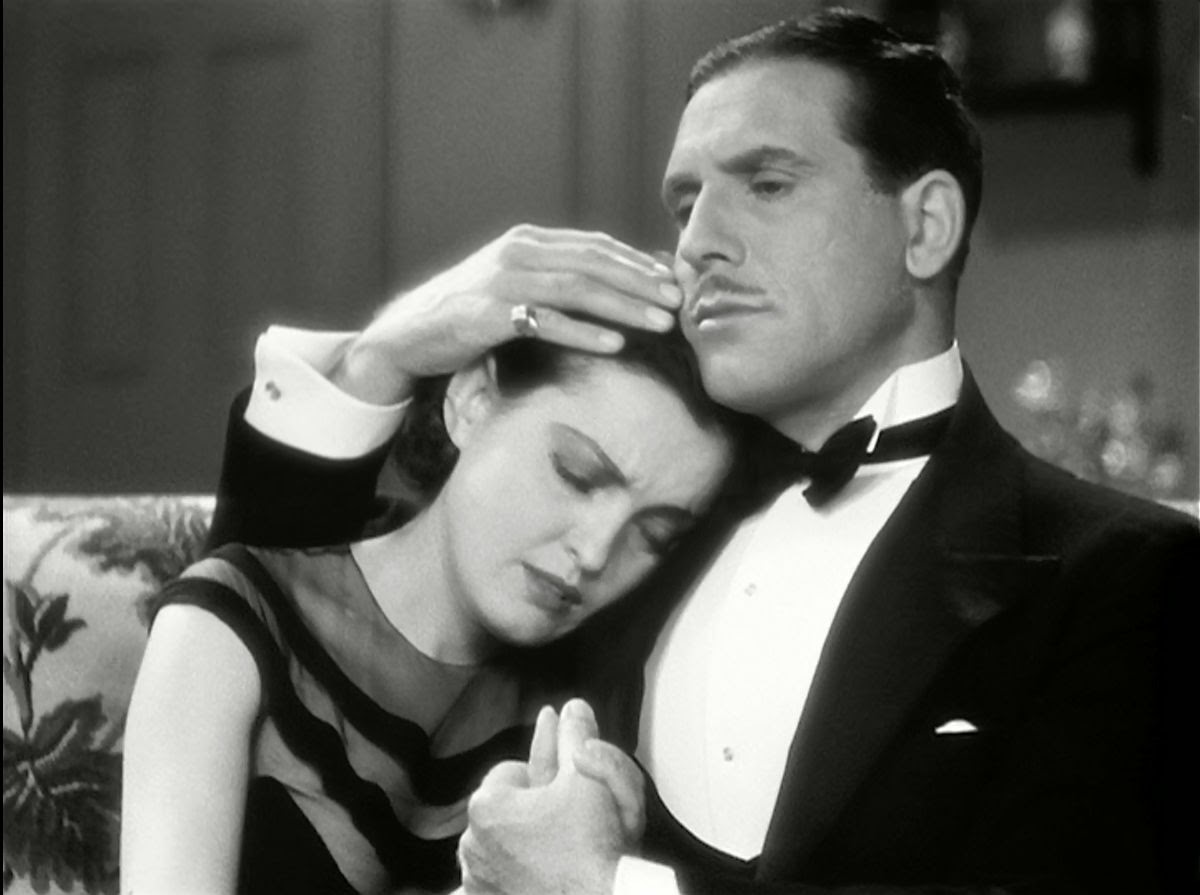 While I certainly wouldn’t want to discourage anyone from checking out The Sin of Nora Moran, the film does admittedly have a few weaknesses.  Because of its brief running time (I clocked it at 64 minutes), a lot of the character development had to either be rushed or discarded and I’m convinced that had there been a little more care put into fleshing them out we would have been left with a truly remarkable film.  The acting is sufficient, but save for Zita (best remembered for her leading lady role in 1932’s The Mummy) in her penultimate 1930s turn (she made only one additional movie before going back to the stage) most of the supporting players don’t really stand out all that much.  If anything, the one reason why Nora Moran remains memorable for classic film buffs is this iconic poster (illustrated by Alberto Vargas): 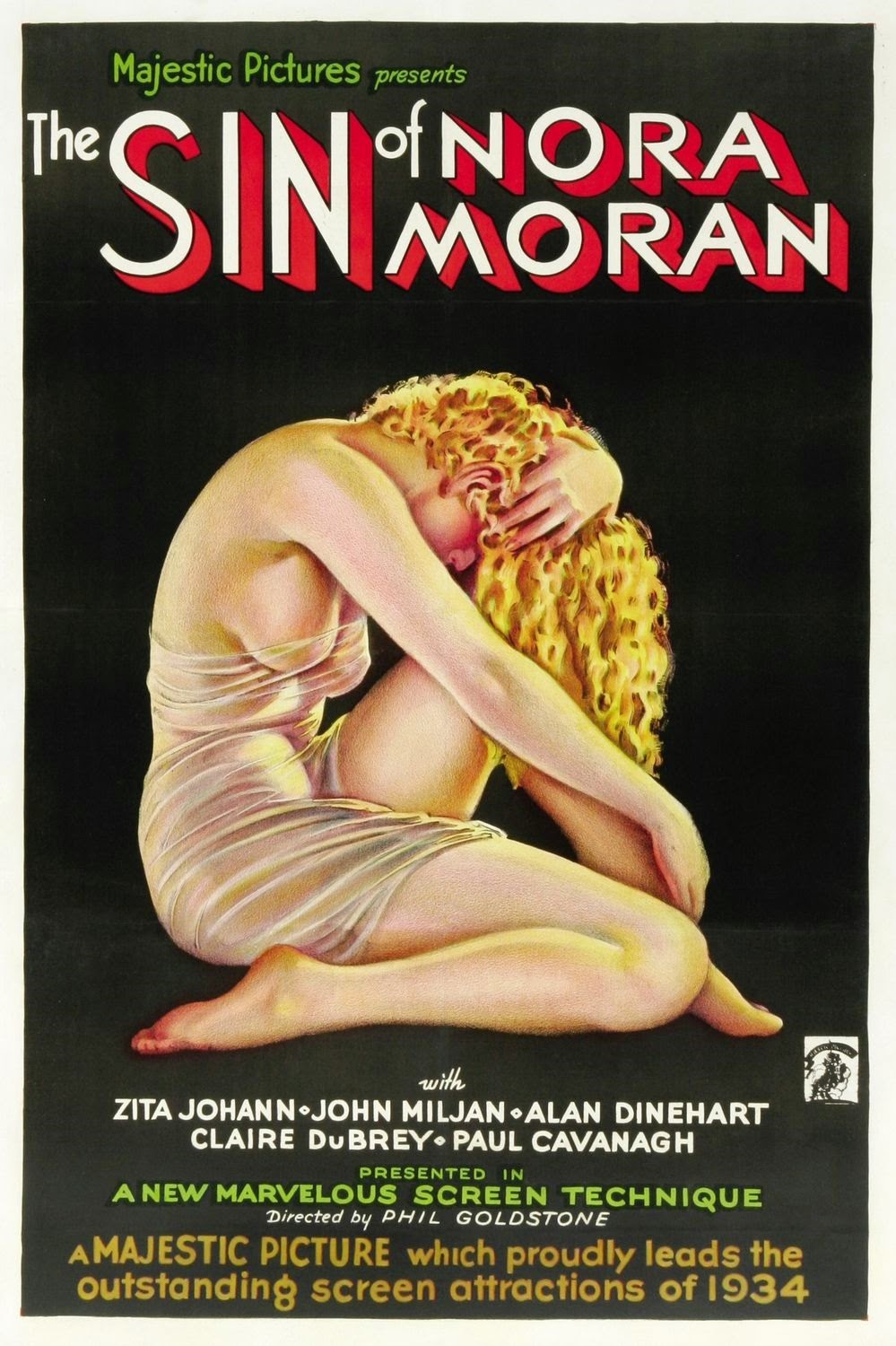 Leonard Maltin notes in his Classic Movie Guide that Nora Moran is “more notable for its ambitions than its achievements,” and I think that’s a pretty fair assessment; it’s a pleasant little jewel that gets an A for effort and a C- for execution.  There are public domain copies of the film floating hither and thither (and it’s also on YouTube) but if you get an opportunity to track down the 2001 Image Entertainment DVD you’ll not only be rewarded with a striking print (it’s the UCLA Film and Television restoration) but it’s paired with another first-rate little B in Prison Train (1938).  (Prison Train stars Linda Winters, who changed her name three years later to Dorothy Comingore and appeared in that Citizen Kane picture I mentioned earlier.  According to Train writer/co-director Shepard Traube, Orson Welles screened the picture prior to casting Kane.)

“It may be true that no one ever set out to make a bad movie,” observes Cocchi in Second Feature, “but quite a few turned out that way.”  That’s the wonderful thing about checking out the fascinating realm of B-programmers: every now and then you’ll find a picture that makes you sit up and take notice, and The Sin of Nora Moran is without a doubt Exhibit A on that score.
Posted by Ivan G Shreve Jr at 12:00 AM

I always applaud the "A for Efforts" that come my way. I'll have to get acquainted with Nora.

Hi, Ivan -- I've only seen this film once, and I wasn't terribly impressed; I think I wasn't ready for its, shall we say, uniqueness. I plan to give it another try one of these days -- maybe I'll have more of an appreciation the second time around! Thanks so much for this great pick and for contributing to the blogathon!

Man, I've been meaning to see this ever since I first read about it on another site. But I've found it on YouTube & bookmarked it. I've bookmarked your site, too, to use as a reference when I'm watching it. Thanks!

Now that's a pre-code movie poster if ever I saw one ;)
Must admit I've been meaning to watch this for a while but have been putting it off as I think I'd pre-judged it as OTT and hysterical. Happy to see your review prove me wrong!

I watched this one recently and really enjoyed as well. Really fascinating presentation that gives the movie several layers to explore as well as a great central performance. Thanks for picking, it deserves to be more well seen!