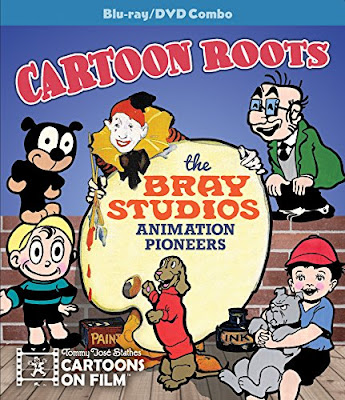 Back in September 2016, I beat the drum for an Indiegogo project instituted by Tommy José Stathes—early animation historian, archivist, preservationist, and societal gadabout—that would bring to DVD/Blu-ray fifteen early animation shorts starring the irrepressible Bobby Bumps, a beloved cartoon tyke who headlined a good many one-reelers for the John Randolph Bray cartoon studio between 1915 and 1925 (Bobby was created by J.R. Bray animator Earl Hurd).  Stathes, who owns one of the largest silent film cartoon collections in the world, has made it his mission to share these goodies through his home video company Cartoons on Film; the organization is dedicated, to quote the website, “to shar[ing] these masterpieces and prevent[ing] them from being forgotten ever again.” 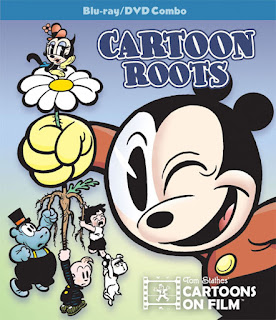 One of Cartoons on Film’s previous DVD/Blu-ray releases, Cartoon Roots, was reviewed by yours truly at my “Where’s That Been?” column at ClassicFlix back in April of 2015…and in the interim, I had purchased its sequel Cartoon Roots: The Bray Studios – Animation Pioneers with every intention of writing it up in this space at Thrilling Days of Yesteryear.  The delay on this requires a bit of an explanation: I have two Blu-ray players here in Castle Yesteryear.  One of them is connected to the desktop computer in my bedroom…but it no longer plays new Blu-rays because the software that came with the computer insists I pay for an update before it will commence with the Blu-ray thing.  (I simply refuse to submit to this kind of extortion.  It’s akin to paying for sex.)

The other player is in the living room…and since the TV out there is often held hostage by my MSLSD-obsessed father, it’s a little difficult scheduling time to watch any Blu-rays.  I try to do it after he’s officially called it quits for the day (and has headed off for sleepy bye) …but by the time, I’m usually too exhausted to watch anything myself.  (Also, too: my mother suffers from insomnia, and she’s been known to wander out into the living room at that time of night after getting the full two hours of shuteye.  I know the last thing she’s going to want to do is watch silent cartoons.)  It wasn’t until I finally decided that I would stop putting it off and just tear off the shrink wrap that I realized—this is a DVD/Blu-ray combo.  I could have watched this on the DVD player in my bedroom.  So mea maxima culpa to you, Tom…but as I have noted so often here on the blog in the past—I can be a real idiot at times. 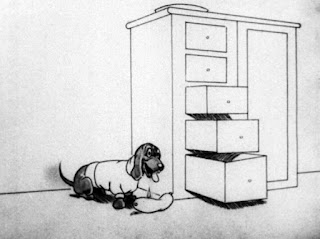 As befitting its title, the content of Cartoon Roots: The Bray Studios focuses on shorts produced at one of the most inventive of the cartoon factories (and the first successful animation company in America).  The Bray Studios’ first effort, The Artist’s Dream (1913; a.k.a. The Dachshund and The Sausages), kicks off the proceedings; this famous short is a delightful little outing in which a little cartoon weiner dog drawn on an artist’s easel ingenuously gobbles up a plate of bangers…much to the animator’s bewilderment.  The Artist’s Dream was featured on The Greatest Cable Channel Known to Mankind™ in October of 2012 on a presentation of early New York animation shorts hosted by cartoon guru Jerry Beck and TCM oracle Robert “Bobby Osbo” Osborne. 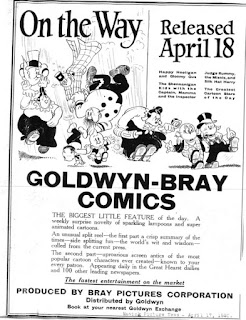 The House of Yesteryear was probably in one of its frequent non-TCM periods at the time the previously mentioned special was televised…but I was able to catch the 100th Anniversary of Bray Studios two years later, which is where I saw one of the DVD/Blu-ray’s other ‘toons, A Fitting Gift (1920).  Gift stars Judge Rummy, who was the subject of a popular comic strip by Tad Dorgan (from 1910 to 1922) that was adapted by the Bray Studios in a series of shorts from 1918 to 1922.  Accompanied by his sidekick Silk Hat Harry, His Honor browses various corsets in a shop to find a suitable one for his wife.  Wacky complications ensue.  J.R. Bray brought several personalities from the “funny papers” to the big screen, represented on Cartoon Roots: The Bray Studios with characters like Krazy Kat (The Best Mouse Loses [1920]) and Jerry on the Job (The Tale of the Wag [1920]).  Even the popular Bobby Bumps series had its origins in comic strips; creator Earl Hurd drew an embryonic version of Bobby as “Brick Bodkin” for The New York Journal from 1912 to 1914.  (There’s one of Bobby’s cartoons on this set: Bobby Bumps’ Pup Gets the Flea-enza [1919].) 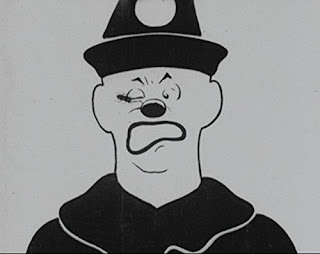 A chief reason why I—and by that rationale, so many others—find silent cartoon shorts so fascinating is that they were truly inventive little creations…and not just geared to juvenile audiences (some of the material is a little on the risqué side).  How Animated Cartoons are Made (1919) is a jewel, starring animator Wallace Carlson as himself in a short that “documents” how he put together a typical “Us Fellers” cartoon (a short-lived Bray series featuring a daydreaming tyke who answered to “Dreamy Dud”).  Granted, the short deviates a great deal from reality (it leads you to believe producing cartoons was a one-man show…which it most assuredly was not) but it’s most entertaining in its skillful blend of live action and animation.  This would be one of the Bray Studios’ hallmarks; directors like Max Fleischer and Walter Lantz used the live action-animation device often, and are represented on this release with The Tantalizing Fly (1919—with Koko the Clown!), The Pied Piper (1924—starring Dinky Doodle and his pup Weakheart), and The Lunch Hound (1927—Pete the Pup).  It will come as no surprise that Fleischer and Lantz would later start their own studios; Terrytoons’ Paul Terry was also a Bray employee (and his legendary Farmer Alfalfa appears in the 1916 outing Farmer Alfalfa Sees New York.) 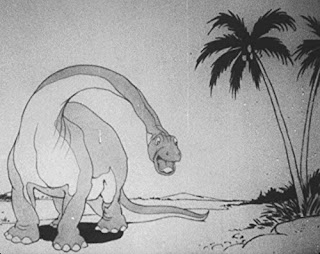 Rounding out Cartoon Roots: The Bray Studios are Col. Heeza Liar’s African Hunt (1914), The Police Dog on the Wire (1917), Chemical Inspiration (1921), and The Point of View (1921)—an interesting public service announcement about the need to see your optometrist regularly.  Fans of Winsor McCay might get a chuckle out of Diplodocus (1915), a cartoon that was clearly inspired by McCay’s famous Gertie the Dinosaur (1914).  (There is a lot of gossip and speculation as to what Bray “liberated” from McCay in terms of animation techniques—I won’t get into it here.)  Cartoon Roots: The Bray Studios is also stuffed with a lot of lovely extra goodies (promotional art, trade paper items) and is supplemented with a “program guide” with detailed information on each short as well as informative essays from Stathes, Beck, David Gerstein (who scored several of the shorts), and Facebook compadre Thad Komorowski.  Animation fanatics will want a copy of this so that they can hug it and squeeze it and pet it and call it “George” …but classic movie fans in general should hie themselves to Amazon and grab one for its indispensable historical value.