In his 2008 biography on silent screen icon Douglas Fairbanks, author Jeffery Vance notes about The Three Musketeers (1921): “The story’s D’Artagnan was a role Fairbanks was born to play.  He had an emotional connection to the character—it was his touchstone; he looked to the exuberant Gascon youth as his ideal screen self (so much so that he would revisit the character for his silent screen valedictory, The Iron Mask).  The importance of Fairbanks’ The Three Musketeers lies in the fact that it was his career leap to the kind of action film popular today.” 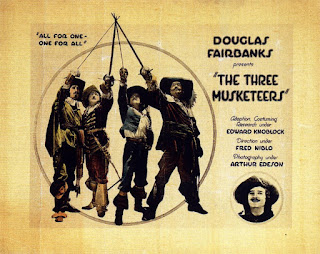 Vance succinctly sums up the reason why the 1921 version of The Three Musketeers remains so entertaining today; it’s a perfect vehicle for the actor that silent film fans associate with stunts and athletic derring-do, and Doug is unquestionably having the time of his life.  Even if you haven’t read the famous Alexandre Dumas book (as my blogging compadre the Mythical Monkey once joked: “The Monkey has spent most of the summer reading the collected works of Alexandre Dumas—or, more accurately, The Three Musketeers which is long enough to feel like the collected works of Alexandre Dumas…”) it’s so ingrained in popular culture that even as kids we were pretending to have swordfights with sticks with very little knowledge of what was in the damn novel.  (My mom always insisted we fight with discarded cardboard wrapping paper rolls…less chance of putting an eye out that way.) 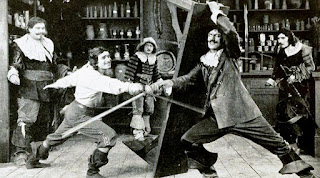 The 1921 Musketeers concentrates on the palace intrigue aspect of Dumas’ novel (the book itself is over 700 pages long), with the elite swordsmen of King Louis XIII’s (Adolphe Menjou) musketeers—Athos (Leon Barry), Porthos (George Siegmann), and Aramis (Eugene Pallette)—taking young cadet D’Artagnan (Doug) into their tutelage.  D’Artagnan’s inexperience is dwarfed by his bravery, loyalty, and expertise with the ol’ cheese slicer…and he’ll be pressed into service when he must retrieve a diamond buckle for Queen Anne of Austria (Mary MacLaren) in time for Her Majesty to wear the bauble for the Court Ball.  Anne has been targeted by Louis’ trusted adviser, Cardinal Richelieu (Nigel De Brulier), who seeks to diminish the Queen’s role in counseling her husband by revealing to the King the identity of her lover—The Duke of Buckingham (Thomas Holding).

Fairbanks’ The Three Musketeers is now nestled snugly in the public domain, which is why you can easily find it available on YouTube.  But you would be doing yourself a great disservice if you watched it this way (in fact, do not click on that YouTube link—I forbid it!) rather than checking out the new DVD release from Undercrank Productions (in tandem with verdoux-vision), which came out in December of last year.  It’s been digitally restored (by Marcus Johnson, from the original restoration by Karl Malkames and a transfer by Helge Bernhardt) and best of all, it’s supplemented with an original theatre organ score by the hardest working accompanist in the silent movie business, Ben Model.  (Ben co-produced the disc with fellow Facebook compadre Bruce Lawton.) 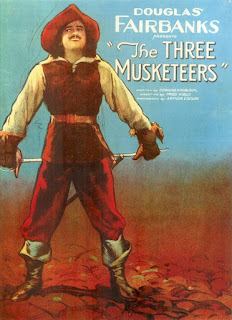 You’ll find it for purchase at Amazon.com; I bought a copy about a week before its official date of release (I was gifted with a discount coupon due to my past support for Ben’s releases), and that Friday following its release (December 13), I checked the USPS website and learned that it was waiting for me in the mailbox outside Rancho Yesteryear.  I mosey down to the box…and it’s not there.  The official ETA was 3:09pm; I was out at the box ten minutes later, and it vaporized.  Surely someone couldn’t have done their Christmas robbing that early.

Though I initially suspected that my arch enemy Smock Lady was up to her old tricks (Andrew “Grover” Leal told me via Facebook that he’s convinced she’s branched out to his neck of the woods), the DVD eventually arrived the following Tuesday (I asked Becky, our postal person, how something like this could happen—she was just as perplexed as I was).  I had a Plan B as backup, by the way; I have the Kino version that I bought during one of their $9.95 sales (clearly, I have no will power).  A quick glance at the Kino site turned up no mention of their disc, so I would unhesitatingly recommend you invest in Undercrank’s release; Model’s score is magnifique (don’t be surprised if you find yourself speaking a lot of French, Tish, after you’ve watched this one). 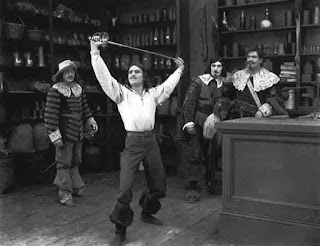 The Three Musketeers would pave the way for some of the finest silent epics of that era, all starring Douglas Fairbanks: Robin Hood (1922), The Thief of Bagdad (1924), The Black Pirate (1926), etc.  (It also bestowed upon Fairbanks the “lip toupee” that he sported until the end of his days.)  Doug may have been too old to play D’Artagnan (he was thirty-eight at the time) …but when he executes that famous one-handed handspring to grab his weapon during a swordfight, you may find yourself doing a golf clap in the privacy of your TV room.  “In the final analysis,” declares Vance, “the reverberations of this production upon the life and career of Douglas Fairbanks can scarcely be overestimated.”