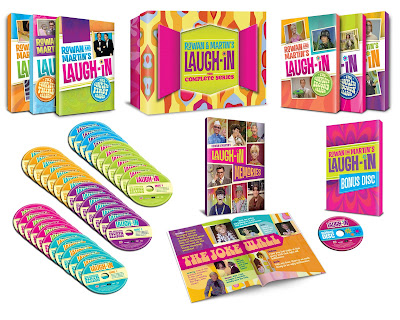 When Rowan & Martin’s Laugh-In premiered as a one-shot NBC-TV special on September 9, 1967, several of the show’s best remembered cast members were already on board: Judy Carne, Arte Johnson, Henry Gibson, Jo Anne Worley, and Ruth Buzzi, to be precise.  Larry Hovis also appeared in the special, taking a sabbatical from his regular gig as Sgt. Andrew Carter on Hogan’s Heroes (he would return to Laugh-In later in the show’s run, along with his Heroes castmate Richard Dawson), as did Barbara Feldon—who might have become a Laugh-In regular if her Get Smart duties hadn’t limited her participation to a handful of the early telecasts.  What you may not know (then again, if you’ve read my Facebook compadre Hal Erickson’s book you might) is that Ken Berry was also in the pilot.  Just imagine.  If they had kept Berry in the cast, we might have been spared Mayberry R.F.D.  (Just can’t catch a break.) 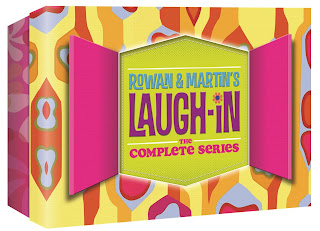 If you’re curious as to my sudden interest in Rowan & Martin’s Laugh-In, it’s because I received an e-mail last month from my good friend Michael Krause at Foundry Communications that the iconic comedy hour—which aired over NBC from January 22, 1968 to March 12, 1973, and was television’s #1 show in the 1968-69 and 1969-70 seasons—has made its home video debut in a ginormous DVD collection available from Time Life and Proven Entertainment.  All 140 telecasts are present (including the final season, which until they recently resurfaced on the Decades channel had long been MIA) and accounted for in this 38-disc set, along with scads of bodacious extras and a 32-page collectible booklet—Rowan & Martin’s Laugh-In: The Complete Series can be ordered right now at www.timelife.com/laughin: the tariff is $249.95 (for the budget-minded, there's a 40-episode "Best of" set priced at $99.95).  (Fans of the show have my permission to discard their “Best of” Rhino DVDs they may own—eBay operators are standing by.)

Like most couch potatoes of my generation, I dropped in on the show’s legendary “cocktail party” from time to time…though admittedly, it was in the show’s declining years, when most of its famous cast members had moved on to bigger and better things and Laugh-In was having to rely on the high-wattage comedy contributions of Moosie Drier.  I’m more familiar with the whittled down half-hour version of the program which aired for a time on Nick at Nite (the series’ original hour-long syndication package consisted of 70 hours culled from the first three seasons, along with the pilot and a few Season 4 installments) but to be honest—I never could figure out what all the fuss was about.  I think Laugh-In’s reputation for hip irreverence is somewhat inflated; creator-producer George Schlatter describes it as “a free fall of television without a net.  It was dangerous.  It was controversial.  It was totally unpredictable and always funny.”  Well, not really.  It was little more than sped-up vaudeville hokum—a mixture of the irreverence of Olsen and Johnson’s Hellzapoppin’ and the technological wackiness of television comedy innovator Ernie Kovacs.  (Schlatter was and still is married to Jolene Brand, a cast member of Kovacs’ show.)

Laugh-In was critically praised for its “representation of the counterculture” …but in this superb article by Kliph Nesteroff (who recycles some of this material in his indispensable The Comedians: Drunks, Thieves, Scoundrels and the History of American Comedy), the argument is convincingly made that the show was nothing more than The Establishment’s idea of The Counterculture (if you read Kliph’s piece, you’ll learn that Laugh-In head writer Paul Keyes played a large role in making Richard Milhous Nixon palatable to TV audiences).  “Laugh-In is commonly considered a reflection of the late sixties youth sensibility, but closer examination reveals a much different picture,” Kliph writes.  “It was, in essence, an establishment show, profiting from the anti-establishment sentiment running through America.  Moderated by the comedy team of Dan Rowan and Dick Martin, Laugh-In was old in style, but draped in the popular fashion of the day.  It effectively garnered a genuine hippie aesthetic, but any actual connection to the counterculture was mostly smoke and mirrors.  The bulk of Laugh-In consisted of eye-catching vaudeville bits that mostly ignored the war, the riots and the protest.  It embraced the look and sound of the hippies and had no problem making references to getting high, but generally glossed over political issues.”

This assessment goes a long way in explaining why I experienced disappointment with Rowan & Martin’s Laugh-In as I got older: I was looking for something that was never there in the first place.  So I need to temper my criticism from the previous paragraphs with this caveat: if you’re looking for the biting political satire of such 60s shows as That Was the Week That Was or The Smothers Brothers Comedy Hour, you’re not going to find it on Laugh-In; its humor was more of the toothless Jay Leno-Tonight Show variety.  (In fact, if you read Nesteroff’s article in its entirety you’ll learn that hosts Rowan and Martin eventually bought out producer Schlatter’s interest in the program because the two stars “were very heavily into Nixon.  They actually had a quota of Daniel Ellsberg jokes, a quota of anti-New York Times jokes, and a weekly segment on the [left-wing] distortion of the news.”)  Yet if you look at the series through the prism as one of those classic television variety hours that they sadly don’t make any more, Laugh-In can be pretty amusing from time to time.  (Television to me has become a vast repository of “reality shows” …which you can actually lay the blame for at Schlatter’s feet for creating the successful Real People in 1979.)

The “big names” on the show had already vamoosed during the period I watched Laugh-In although Lily Tomlin was still on the show; she joined in the show’s 1969-70 season, and became phenomenally popular with her characterizations of Ernestine (“Have I reached the party to whom I am speaking?”), Edith Ann (“And that’s the truth…thbthh!!!”), and Mrs. Earbore, the “Tasteful Lady.”  Tomlin probably enjoyed the biggest post-Laugh-In career—she garnered an Oscar nomination for her performance in the 1975 film Nashville, which also featured Laugh-In alum Henry Gibson—save for Goldie Hawn, who took home her Academy Award trophy (for Best Supporting Actress in 1968’s Cactus Flower) while she was still performing on the show.  (I’ve watched a few of the early telecasts featuring Goldie, and was amused that her persona of the giggly blonde ditz took a show or two to develop—in her early appearances she plays it perfectly straight.  Also hooty: Hawn was on the show at the same time her Private Benjamin co-star Eileen Brennan was also a regular.)  Laugh-In featured some truly funny comic actresses: Judy Carne (the “Sock it to me” girl who would be doused with water or dropped through a trap door whenever she uttered the show’s phrase), Ruth Buzzi (“I just want to swing!”), and Jo Anne Worley (“Bo-ring!”), who only has to start in with that infectiously goofy laugh to make me chuckle (“Is that a chicken joke?”).

On the distaff side, there was Henry Gibson (the poetry guy with the flower), Gary Owens (the old-style announcer with his ever-present hand cupped to his ear), Alan Sues (sidesplitting as “Uncle Al, the kiddie’s pal”), and Larry Hovis (I loved his David Brinkley-like newscaster).  I didn’t find Arte Johnson as hilarious as some of my contemporaries (his German soldier shtick—“Verrry interesting”—got old quickly) though I did like his interactions with Buzzi’s Gladys Ormphby (“Care for a walnetto?”).  (Actually, the funniest thing about the old man was that his official name was “Tyrone F. Horneigh” …though they had to pronounce the last name as “Hor-NIGH” for obvious reasons.)  And I still have a soft spot for Dave Madden, who made me titter as the dour deadpan guy who threw confetti as a reaction to punchlines…because his “Reuben Kincaid” on The Partridge Family is one of my role models.

Rowan & Martin’s Laugh-In has been released to DVD to coincide with the commemoration of the show’s 50th anniversary, and while I couldn’t score a screener of the set I did receive a wonderful consolation prize that I’ll discuss in a bit more detail in a future post.  What I could sample was a delightful surprise in that the show still manages to be entertaining despite the inevitable dating of the material, and I would not hesitate to recommend a purchase for true Laugh-In diehards—it’s timeless TV.  (You bet your sweet bippy!)

Since last fall, the Decades digital channel has been running Laugh-in twice daily, in the afternoon and evening, in original broadcast order.
It's been an education - in some unexpected ways.

What I've been noticing a lot is the topical references, which I've been using as a memory test for myself; I mean, 50 years is fifty freakin' years!

I'm old enough to remember when Laugh-In was in first-run.
When we watched the premiere, the Monday after The Man From UNCLE went dark, and one of the first things we saw was Leo G. Carroll as the bartender at the Party ... well, for my family, that was the tone-setter.
Surprise and speed were what we were liking then; messages were of little importance.
What was great about early Laugh-In was that anything went - and anybody could play.
The Bad Stuff didn't start happening until later in 1968 - but that's another story ...

Watching the Decades reruns, you know who I'm really appreciating?
Dan Rowan and Dick Martin.
Their crosstalk, twice a show (or more, when the occasion demanded).
You wanna talk about timing?
(That's funny, so do I!)
Dick's non sequiturs are funny, but watch how Dan steers him through the bits.
Quote from Dick Martin, after Dan Rowan's passing:
"We just developed this wonderful ability to read each other's minds."
Put datedness aside, where it belongs; Dan and Dick are Just Plain Funny.

In the years since, I've read many of the accounts of What Was Really Going On backstage at Laugh-in; much of this has to be filtered through the agendas of whoever was doing the writing.
It helped lead me to my current attitudes about partisan politics (on both sides), as best expressed in that New Yorker cartoon with the kid at the dinner table:
"I say it's spinach and I say the hell with it."
Now to reorganize my finances and see which of these collections suits my needs (or whatever).

I remember one of the 1968 "News of The Future" segments that began: "Dateline 1980, Washington, D.C...President Ronald Reagan said today..." and the studio audience erupted in laughter.

I remember one of the 1968 "News of The Future" segments that began: "Dateline 1980, Washington, D.C...President Ronald Reagan said today..." and the studio audience erupted in laughter.

I saw that episode...and had the same reaction!