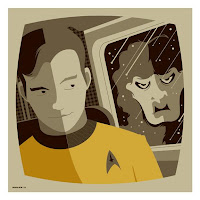 First off—my humblest apologies for not getting in on the ground floor to participate on the inaugural Shatnerthon festivities; ShatFest being sponsored, of course, by my trusted colleague and compadre, Chuckie Award-winning blogger Stacia Jones at She Blogged by Night. I had e-mailed her last week to let her know that while my initial foray into this monumental blogathon event might be stalled due to the July 4th weekend activities taking place at both Rancho Yesteryear and the Double K Ranch (my sister Debbie and her family dropped in for a wonderful visit) that I would do my darndest to catch up with everyone on Day 2. And here we are.

I gave careful consideration as to what I should post regarding the Shat and decided to concentrate on some of his memorable television appearances…but not, as might be expected, his signature work on Star Trek, T.J. Hooker or Boston Legal. No, Thrilling Days of Yesteryear has dug into its voluminous dusty archives to unearth some first-rate guest shots of the young William Shatner, back when he was toiling to put groceries on the table and before he went where no man has gone before. Today, I’ll look at the two episodes from Thriller (1960-62), the classic horror anthology hosted by TDOY god Boris Karloff—so leave us kick things off with the first of Bill’s appearances…”The Hungry Glass,” originally telecast on January 3, 1961 and based on the short story by Robert “Psycho” Bloch.

(By the way—I apologize profusely for the poor quality of these screen caps. As has been reported here and elsewhere, Image Entertainment is releasing the entire run of Thriller to DVD in August…and the pristine quality of those prints can’t come soon enough, as far as I’m concerned.) 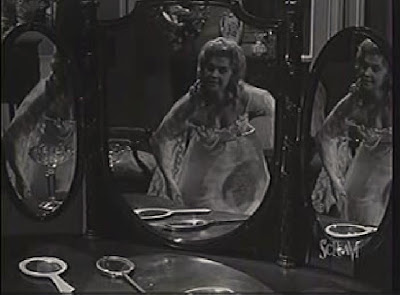 Before the story gets underway, there’s a brief coda at the beginning that shows us a beautiful young woman gazing at her reflection in a series of mirrors …said woman is played by Donna Douglas, still a year-and-a-half away from her signature role as Elly May Clampett on The Beverly Hillbillies. (“Glass” was adapted and directed by television veteran Douglas Heyes—who also helmed the classic Twilight Zone episode “Eye of the Beholder.” He needed a striking young woman for that role as well…and said female was also played by Douglas.) There’s a knock outside the door of the woman’s house…and when she comes to the front door… 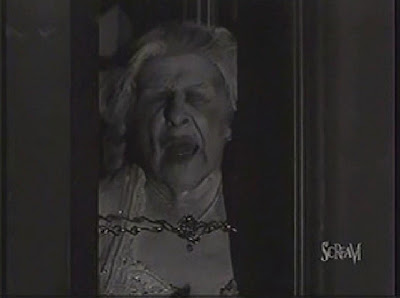 Whoa! Talk about not having your game face on. The scene then cuts to host Karloff, who stands beside a large mirror as well: 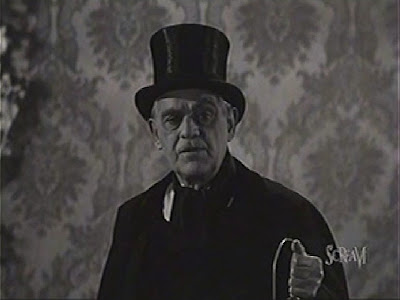 A beautiful young face in the mirror…a pitiful old face in the door…could they have been one and the same? Some people say that mirrors never lie…others say that they do, they lie, they cheat, they kill….some say that every time you look in one…you see death at work. But most of us see only what we want to see…and perhaps it’s best not to see too deeply into the darkness behind our mirrors…for there live things beyond our imagination as sure as my name is Boris Karloff… 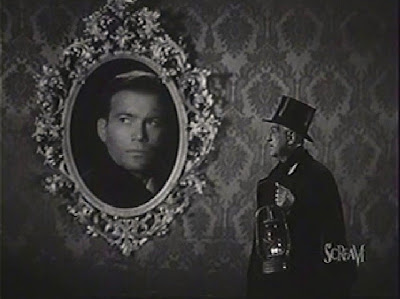 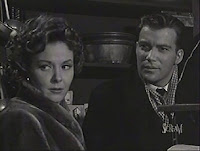 The four principals of this piece—Shat, Joanna Heyes (yes, the wife of the director…rank nepotism!), Russell “The Professor” Johnson and Elizabeth Allen—then appear as images in the mirror next to Karloff…a novel way to introduce the actors, I thought. We’re then whisked to a cape in a part of New England where people inside a general store struggle to sound like Parker Fennelly as they patiently wait out a thunderstorm. Gil Thrasher (Shatner) and wife Marcia (Heyes) arrive on the scene; they’re there to meet up with their friend and real estate agent Adam Talmadge (Johnson), who’s just sold them a house in the area. But the residents of this unnamed town are a notoriously superstitious lot—one of the old codgers (B-western veteran Clem Bevans) is trying to spook them with tales of the old Bellman place, ominously informing them as to the fact that there are no mirrors in the jernt. When Talmadge arrives, he asks the storekeeper (Pitt Herbert, who has the worst New England accent I’ve ever heard) for some light bulbs to take up to the house—even though the storm has knocked out the electricity. 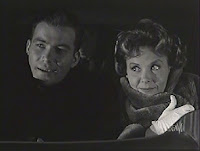 Gil, Marcia and Adam meet up with Adam’s wife (Allen) in their station wagon, and the four of them jokingly speculate that the house must have been previously owned by vampires since there are no mirrors around. Well, technically that’s not quite true—there were mirrors found on the property…but they had all been shattered; the house the Thrashers have purchased was being sold at such a bargain price because of a series of “accidents” that occurred around the place.

GIL: Adam…the truth now…the people who built that place—where were they from?
ADAM: The Bellmans? Pennsylvania, I think…
GIL: You sure it wasn’t Transylvania?
(The four of them laugh…)
ADAM: The mirrors…so that’s what the old coots were bending your ears about…
GIL: Now, look…I’ll admit that you warned us that the roof leaks and the cellar floods and the shutters go BANG...but…what’s this about no mirrors?
ADAM: Didn’t I tell you why you got the place so cheap?
GIL: Yeah…you said the local characters think the place is unlucky…
ADAM: Well, unlucky because of the broken mirrors…Gil, you have no idea how these people can build up a story…seems that there were some nasty accidents up there years ago…couple of people killed by shattered glass…so now the yarn’s been worked around to where they actually murdered by the mirrors…with malice aforethought…
MARCIA: Seems logical…
GIL: Sure…some mornings when I’m shaving, the guy in the glass looks pretty deadly…especially with a razor in his hand…
(More laughter)
ADAM: Well, I hadn’t thought about it, but…I’d better get you some sort of mirror, at least until you get settled… (He starts to get out of the car)
MARCIA: Never mind—there’s one in my traveling case…
GIL (snuggling up next to his wife): Oh, Marcia couldn’t live without her mirrors…
MARCIA: What woman could? 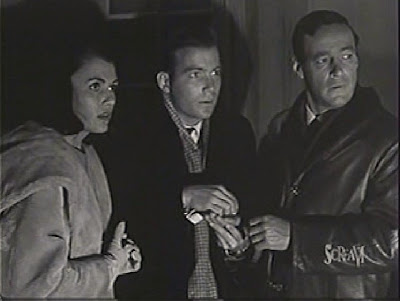 The four of them arrive at the house…and it’s quite the showplace, with a breathtaking view of the ocean from a gorgeous bay window; both Thrashers are tingly with exhilaration because the property is going to reap them large benefits (he’s a photographer, she’s a decorator) once they’ve worked their magic on the fixer-upper. But Liz is spooked when she sees the reflection of a figure reaching for Marcia in the window, and her shrieks causes Adam to drop a housewarming gift of a bottle of champagne, cutting his hand in the process. 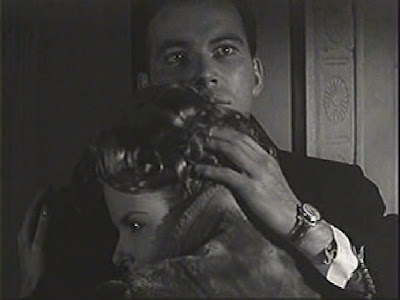 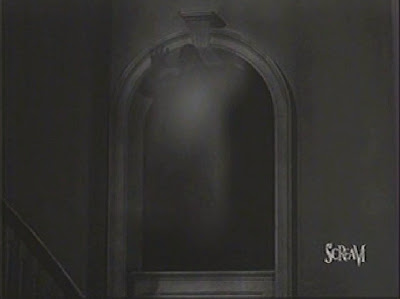 I hope their homeowner’s insurance covers that. Also, Gil’s taken a photograph that contains an image of a little girl… 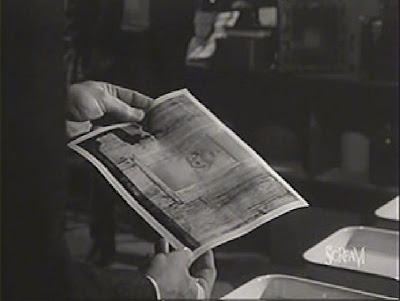 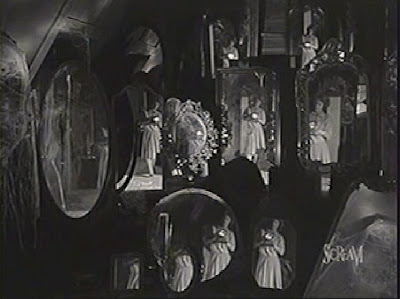 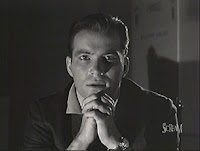 I don’t want to give away the rest of the plot for those who haven’t seen it because not only is this episode one of the best Thriller has to offer—it’s one of the scariest hours of horror I’ve ever watched on television period. Shatner is amazing in this; a fine showcase of the talent he displayed when he was a first-rate actor and not the overbaked ham he would become as a result of his stardom on Star Trek. His Gil Thrasher is sort of a dress rehearsal for his tour-de-force turn as airplane passenger Bob Wilson in another classic Twilight Zone episode, “Nightmare at 20,000 Feet” (10/11/63). In “Nightmare,” Wilson has spotted a “gremlin” on the wing of the airplane he and his wife are traveling on…but because he’s been a recent guest in a cracker factory he must first convince himself that he’s perfectly sane and saw what he saw what he saw. In “Glass,” his character has a similar situation: he’s a Korean War vet, and during the conflict he came down with a bout of “the fever”—so he’s not completely sure at first as to whether the events occurring inside the house are real or just his feverish imagination. 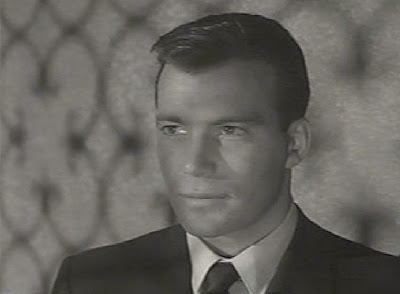 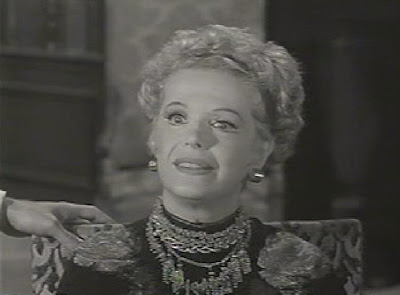 Beatrice has also acquired the titular painting, a work by the accomplished artist Henri Radin…who hung himself shortly after completing it (this is shown to us in a brief prologue that features character greats Fifi D’Orsay as Henri’s landlady and Henry Daniell as Henri’s pop). The painting is allegedly cursed, and Paul is concerned about what’s going to happen to his aunt since the Reaper is now in her profession—every previous owner of the Grimster met with a particularly violent and nasty demise. But you can’t say the painting doesn’t play fair; before the person is about to croak it warns the victim through a sort of stigmatic bleeding emanating from the scythe it carries in the portrait.

Again, I don’t want to spoil the resolution of this nifty little chiller for those unfamiliar with it—but I will say that while “Reaper” isn’t quite as good as “Glass” (Shatner’s motives in this one are all-too transparent) it’s still worth a look-see, particularly the wow of a denouement. Author Robert Bloch, whose short story was used for “Glass,” adapted Harold Lawlor’s short story here, and the supporting work from Schafer, Merrill, D’Orsay, Daniell, Paul “M Squad” Newlan and Robert “Picket Fences” Cornthwaite is top-notch. Elizabeth Allen, who played Russell Johnson’s wife in “Glass,” is in this one as Schafer’s secretary (I don’t know if she’s wearing a wig but she’s pretty hot as a blonde).

And if you’ve ever wondered what Night Gallery would have looked like with Boris as host—here’s a suggestion: 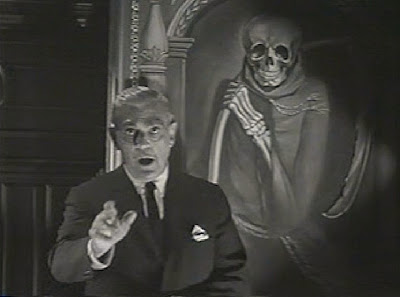 Of course, Shatner wouldn’t have been a slouch as the Gallery curator, either… 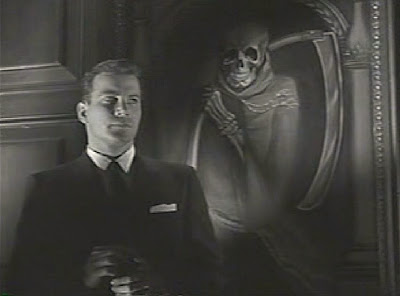 Tomorrow: There are eight million stories in the Naked City…and William Shatner is two of them. I’ll review his appearances in “Portrait of a Painter” and “Without Stick or Sword,” two episodes from the seminal 60s TV crime drama as Shatnerthon continues.

Nice job, Ivan. I've missed your posts of late. Man can subsist on birthday announcements only so long! :)

I haven't seen an episode of THRILLER since it was on the air and am jonesing for the box set!!! Even more, I think, than the TWILIGHT ZONE collection as I don't remember these at all, although I suspect I will once I see them again.

Shatner, while no Sir Larry Oliver, definitely had his moments, pre-Trek, can't wait to watch him in this!

Woo! I can't wait until "Thriller" is released. Also, Fifi D’Orsay AND Henry Daniell in one delicious package is too good to be believed.