This essay is Thrilling Days of Yesteryear’s contribution to the Nicholas Ray Blogathon being hosted at Cinema Viewfinder this week from September 5-8.  If you’ve stopped by here in the past, you realize that scholarly commentary is simply not what I do best here…so for better-written and insightful entries in this outstanding event, skate on over here for details.

Before I start, I need to explain my choice of Nicholas Ray’s feature film, A Woman’s Secret (1949), as my entry in the blogathon that bears his name.  Originally, I wanted to write an essay on Johnny Guitar (1954)—specifically, why Guitar was responsible for instilling in me a love for the western film genre.  But I ran into a roadblock when I remembered that my DVD copy of the film was a Region 2 disc (from the ), and that would make it a mite difficult to do screen captures.  So when I started digging into some boxes located in the dusty Thrilling Days of Yesteryear archives, I came up with two DVD-Rs of Ray-directed features that could substitute in a thrice: Secret and Born to Be Bad (1950).  Then I remembered that I had written about Born sometime back, and so Secret came off the bench to play in the game.
My good friend Cullen Gallagher wrote a first-rate essay on A Woman’s Secret three years ago at Not Coming to a Theater Near You, and he tabs the movie “one of the most maligned and ignored films of his career.”  And I think there’s a perfectly logical explanation for this.  The movie isn’t very good.  Secret was actually filmed before the director’s celebrated debut, They Live by Night (1949), so I’m perfectly willing to cut him a little slack being his first time at-bat and all.  (I promise, the sports metaphors are going to stop now.)  Then again, it’s not too difficult to see why Night was released before Secret—it’s clearly the superior film. 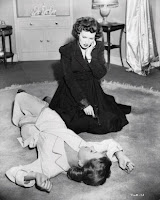 Based on the novel Mortgage on Life by Vicki Baum (who is perhaps best-known as the authoress of the play Menschen in Hotel, the basis for the 1932 film Grand Hotel), Secret unfolds with scenes of a singer named Estrellita (Gloria Grahame) signing off her weekly radio show and returning home to the dwelling that she shares with Marian Washburn (Maureen O’Hara).  Estrellita’s real name is Susan Caldwell, and Susan announces to Marian that she’s quitting show business due to exhaustion…a decision that does not set well with friend Marian.  Washburn follows Susan to her room, and moments later a gunshot rings out through the house—a domestic (Virginia Farmer) rushes upstairs and upon opening the door finds Marian hovering over Susan’s body.

Luckily for us Grahame fans, Susan isn’t dead…but for those of us who also enjoy staring at Maureen O’Hara for extended periods of time it would appear that Mo is up to her loveliness in trouble when she’s arrested for attempted murder.  .Melvyn is on hand as mutual friend Luke Jordan, a piannah-player and aspiring songwriter, who’s convinced that Marian is innocent and attempts to persuade Inspector Jim Fowler (Jay C. Flippen) of the same.  In a series of flashbacks (screenwriter Herman J. Mankiewicz recycles the technique he used for Citizen Kane), Jordan relates to Fowler the tale of how Marian and Susan met—Marian was at one time an accomplished vocalist whose promising career was derailed when she developed laryngitis—according to Luke, “a rare type of laryngitis that the doctors knew nothing about.”  (Damn those backward medical researchers!)  Susan enters the picture when she faints on the stairwell of a rehearsal hall where Marian and Luke fortuitously happen to be, and in taking her home to Marian’s apartment for some warmth and sustenance they learn that the naïve Sue is barely getting by working at a perfume counter…but possesses a pair of pipes that with the right training and guidance will make her a S-T-A-R.  Marian, who has transferred her dreams and desires into her young protégé, soon begins to resent that Luke seems to have developed a thing for Susan…which the horndog swears is not the case.  Susan, on the other hand, begins to chafe under Marian’s tutelage and finally decides that she wants to hang it up.
Is that “a woman’s secret”?  Or does it have something to do with Marian’s confession to a crime she apparently did not commit?  Or could it be that the two women were a little bit more than just mentor and mentee (I so much wanted this to be the reason, so you can imagine my extreme disappointment...though the subtext certainly does linger).  By the time A Woman’s Secret calls it a wrap, you probably won’t care—or as critic and blogger David Cairns remarked on Facebook last night (he also wrote about this movie for the blogathon): “[T]he best thing about it is I still don't know what the secret was, which woman had it, or why she kept it.” 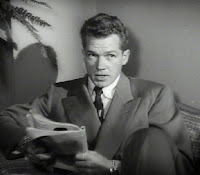 A Woman’s Secret is the kind of sudsy melodrama that motion picture studios used to tab as “women’s pictures” (the modern-day equivalent might be “chick flicks”) but which revisionists today insist on referring as “film noir.”  I could detect nothing by way of a noir pedigree (it’s more like Secret is strong enough for a man but made for a woman), and as much as I wanted to like this film I quickly lost interest in its rather maudlin dramatics.  Melvyn Douglas has always grated on me—I prefer his performances from the latter part of his film career, like Hud (1963) and The Candidate (1972)—and his macho persona in Secret is a bit hard to take.  It gets even worse when he’s matched with Bill Williams, who plays a soldier that Grahame and O’Hara became acquainted with during a sojourn in .  (The two men soon engage in a kind of machismo steel cage death match throughout the picture.)

There are some redeeming qualities about Secret that make it worth a look-see, however.  Danny Peary once observed that the reason why he preferred the films of Nicholas Ray to those of someone like John Huston was that unpredictable things happened in Ray movies…and there are some nice offbeat, clever touches in the film, notably the scene where Grahame faints on the stairs at the rehearsal hall…and two ballet students leap right over her out-for-the-duration body.  There’s also an amusing bit where and Flippen are having coffee at a diner ( is telling the cop the story of Marian and Susan via flashback) and he knocks over a glass of water, spilling it on Jay.  (I just found that funny for some reason.) 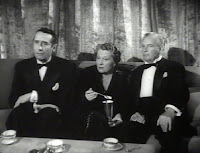 Flippen’s performance as the cop on the case is one of the saving graces of Secret, particularly when he’s teamed up with Mary Philips, cast as Fowler’s wife Mary.  (No imagination.)  Their domestic scenes where they discuss the case are a treat, and in fact it’s Mrs. F (who fancies herself a detective in her own right) who actually figures out the “secret” before her husband.  (Flippen’s detective has a funny line when the wife pays him a visit in his office, claiming she was “just happened to be in the neighborhood”: “Nobody just happens to be in this neighborhood, unless you’re a bondsman.”)  The other acting turn I enjoyed belongs to veteran character great Victor Jory, who plays a lawyer with money to invest and who takes a great interest in Grahame’s burgeoning career.  I liked Jory in this because he sort of plays against type; his “Brook Matthews” is a bit of a mama’s boy…and to see the man who played Injun Joe in The Adventures of Tom Sawyer (1938) or “The Shadow” in the 1940 serial of the same name being kept on a tight leash by the matronly Ann Shoemaker struck me as endearingly odd.

Regular visitors to TDOY know that when getting through a movie like this is a tough slog you have to fall back on keeping an eye out on character favorites in order to cope…and Secret is no exception; at least Emory Parnell is on hand as an irascible desk sergeant (Parnell cracks to Douglas toward the end of the film that “You’ve been a headache right from the beginning,” followed by my applause and cheers) and Ellen Corby turns up briefly as a mousy nurse.  But the most important lesson that I took away from this movie is that in a battle for screen time between two of my favorite actresses…bet on G-L-O-R-I-A.  In fact, the only positive thing that resulted from Grahame’s work on Secret is that she met and married the director—and even though that union didn’t last long their temporary collaboration produced one of Ray’s finest films, In a Lonely Place (1950).  I definitely believe it was worth it.

“a rare type of laryngitis that the doctors knew nothing about.”

Ha! I love lines like that, it always makes me wonder just what lead up to such lazy writing. Do they figure no one will notice? I don't ask that facetiously, I honestly wonder.

This blogathon is making me angry that Johnny Guitar isn't out on US DVD.

Ivan, you have my utmost sympathy for being forced to sit through this stinker and have to concentrate enough to write about it. I agree with the guy who said he did't know what the secret was. Neither did I, and I didn't care.

Stacia's remark made me laugh, and the line she quotes reminds me of Edward D. Woods, Jr.'s famous "The future is where we are going to spend the rest of our lives." Huh? (Poor Ed!)

You are kind to give respect and some kudos to some characters, and I suppose that's true, but I don't think I was paying enough attention after the first 10 minutes to notice much. Your post is the best thing ever engendered by this movie, (other than the fabulous "In A Lonely Place" of course). And my favorite line of yours is "it’s more like Secret is strong enough for a man yet made for a woman." That gave me a real horse laugh! Good one, Ivan!

Haven't seen this one, but man, a script must be pretty bad to make Maureen O'Hara and Gloria Grahame (with lesbian subtext!) into dullsville.

Can't agree with you about Melvyn Douglas. Ninotchka wins me over every time.

"...It’s more like Secret is strong enough for a man but made for a woman)" And this is why we love you.