A swarm of B-movies

I talked about TheB-Movie Celebration in a previous post, and because the festival kicks off tomorrow in Franklin, IN (and runs until September 25th), I thought the TDOY faithful might be interested in a warts-and-all look at this event…and so Cub Reporter Tom Stillabower jotted down some recollections from some of the previous BMC’s he’s attended in the past.  Please put your hands together and join me in welcoming a special guest post from the esteemed Mr. Stillabower…

My wife and I have been attending the B Movie Celebration in , In. for the last few years now. Four years ago, on a Saturday, we went up to just for a visit and to get out of for a couple of days. 's my hometown. I grew up there. When we get into town, we're always on which intersects with , where the Artcraft Theater is located. Whenever we drive past, I always look to see what's playing on the marquee. These days, the Artcraft is only open on weekends and shows classic films. We sometimes go up there if they're showing something of interest. Now imagine my surprise when I see: B Movie Celebration up there on the marquee. When we got to my mom's house, I got on my sisters computer to do a little investigating. Sorry to say, I wasn't able to get down there right away, but I did manage to get down there later in the evening. They were playing Poultrygeist: Night of the Chicken Dead (2006) in the theater (I didn't watch the film, but I could hear it in the lobby. Sounded like a fun movie), but it was who I met in the lobby that held my interest. I met Mr. Lobo, a movie horror host from . We chatted for a while (a great guy, by the way), bought a couple of videos from him. Then I got to meet Conrad Brooks of Plan 9 From Outer Space fame. Got an autograph and bought a movie from him. Didn't get to see a movie, but I did have a good time nonetheless.
Three years ago, my wife & I attended the celebration proper. We bought our tickets and watched some movies. Met Mr. Lobo again. Bought some more movies from him. Had a great time. Two years, the celebration was being held in both & nearby Shelbyville. Attended Friday evening at the Artcraft, and went to Shelbyville on Saturday. The main road connecting the two towns was being worked on, so it was detour time for us, cruising through some back roads (I swear I could hear banjo music). Saw some good films, no Mr. Lobo, and did not have as good a time as the year before.

Last year, the celebration was only being held in at both the Artcraft and at the Canary Creek Cinema. Thank God. Friday evening, before the first movie started, they had a live performance by singer Jane Jensen. It was loud, but once I got used to it, she was alright. The first movie shown at the Artcraft was a light comedy called Monster Cruise (2010), filmed in and around the city of . Direction by Jim Wynorski. After the credits (with a pre-title sequence featuring Hal Fryer, known to many of us as Harlow Hickenlooper, who hosted the Three Stooges shorts on Saturday mornings back in the '60's), the main character gets up, goes running out of his apartment house, late for work. As he is running down the outside steps of the apartment house, my wife leans over to me and says, "hey, isn't that your mom’s house?" I took a good look. Yeah it was, The exterior of his apartment house was my mothers house. That was a trip. The film itself was pretty good. Next up was The Good, the Bad, the Weird (2008), an oriental western. A lot of fun. We left after that one because my wife, who had worked overnight as a patient sitter, was getting tired, so we packed it in for the night. 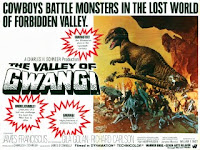 The next morning, I was up and out the door at back at the Artcraft for The Valley of Gwangi (1969). I've seen part of the film before, but this was the first time I had seen it from beginning to end. Not a great Harryhausen film, but a decent time killer. Didn't make it to any of the panel discussions. I was there mainly for the films. That afternoon, I went over to the Canary Creek cinema for the afternoon (my wife wanted to do some shopping with my mother). First up was Robo-geisha (2009). That's right, Robo-geisha. Geishas were turned into bionic killing machines and it took another one of their own kind to stop them. It was a dumb as it sounded, but it was a lot of fun. Almost wish we had a packed house for that one. Would have made it a lot more fun. Next up was The Hitch-Hiker (1953), a low budget film directed by Ida Lupino. A very good film. After that was over I stopped back by my mom's house for a visit. In the evening, we went back to the Artcraft for the Golden Cob awards. I don't remember the name of the band playing (they weren't bad), but they delayed the awards show, and we had to leave if we wanted to get to the Canary Creek Cinema (they also have a drive-in outside the theater) for The Rocky Horror Picture Show (1975). Sorry to say, the attendance for it wasn't better. Back in the 80's, I used to go to Rocky Horror a lot. Been a while since I've seen it. I was a bit rusty on the lines I used to yell back them. They're running it again this year, but at another location. If I make it there, we'll see if I can do better than last year. The following film at the drive-in was Nomads (1986) starring Pierce Brosnan. An okay thriller and Brosnan was all right in the part. I will say this for the Canary Creek Drive-In. You do get the drive-in experience. In between the films, they had the 10 minute intermission, which the closest drive-in to , In. doesn't do. They give you a trailer, then the movie. After the first movie is over, they automatically start the second feature.

The next day, my wife and I went back to the Artcraft for an early afternoon viewing of Ma and Pa Kettle at the Fair (1952). Now, I watched a fair number of the Ma & Pa Kettle films growing up, but I found this film absolutely funnier than I was expecting it to be. After it was over, we joined my mother to go out to the local flea market. It was uneventful until I noticed a book on one of the shelves called: They Came From Outer Space. 12 Classic Science Fiction Tales That Became Major Motion Pictures. Normally, a book like that would fly under my radar (I work in a used book store after all. I see a lot of books on any given day.), but it was edited by Jim Wynorski. Could that be the same Jim Wynorski who directed Monster Cruise? I paid my money and I took my chance. When we went back to the theater for the last movie we saw before heading back home to , I took the book up to Mr. Wynorski and asked him if he edited the book. He did indeed and he signed it for me. How cool was that? Anyway, our last movie was Rocketship X-M (1950). A classic sci-fi b-movie from the early 50's starring Hugh O'Brian & Lloyd Bridges.
There were several other movies that were shown at the Celebration that we did not have time to peruse. But that goes with the territory. I did buy one of the movies shown at there (Death of the Dead [2011]. A horror comedy that wasn't too bad). Anyway, this years is almost upon us and I have been looking forward to it practically since last year. It's a good way to relax, get away from the daily grind, see a movie or two (or three, or four, etc....) with a group of people with similar interest.

I LOVE the Ma & Pa Kettle Movies, own the complete set on DVD (even the post-Kilbride ones). Unfortunately, I've never seen them on a big screen, so I envy your luck! Sounds like it was a fun festival.

Mr. Stillabower, this was a good write-up of what sounds like a blast. I live only a hour from Franklin, Indiana, have not checked on the Artcraft Theater lately because of illness, and have a packed weekend coming up -- so I guess I'll have to miss it! Darn it! Next year for sure! I love the Artcraft -- it is so much fun. The concession stand is inexpensive, you get an old-fashioned ticket-stub drawing for prizes, a skit put on for the genre of whatever is showing, singing the National Anthem and cartoons. Even the ladies room has not been changed since the 50's, and half the toilets don't work. It's just marvelous!

I too am a huge Ma and Pa Kettle fan. I LOVE their movies. My favorite lines are: PA: "Have to get around to that one of these days." -- MA: (after a closet opens and millions of things fall out all over) "Oh, just leave it lay. It's as good one place as another." My very own housecleaning motto!