Sweeping out the back of the store 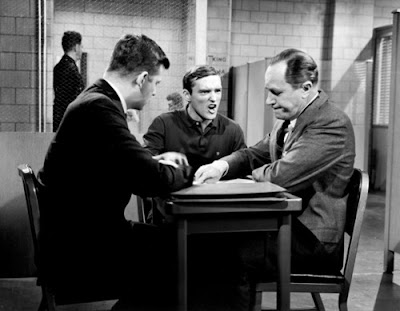 I really don’t have an alibi handy—I’ve been away from the blog for far too long now, and the only possible excuse I can feebly offer up in my defense is that I have been working on other projects.  One of them is up at the blog universally beloved by cinephiles and couch potatoes alike, Edward Copeland on Film and More…, and it celebrates the 50th anniversary of a television show that the once tabbed as "perhaps the most socially-conscious series the medium has ever seen."  The Defenders, a program created by author and playwright Reginald Rose (Twelve Angry Men), debuted in the fall of 1961 and detailed the exploits of a father-and-son legal team played by E.G. Marshall (before he started closing the creaking door on The CBS Radio Mystery Theatre) and Robert Reed (pre-The Brady Bunch…and pre-Mannix, too, come to think of it).  Lawrence (E.G.) and Kenneth Preston (Reed) spent Saturday nights (and later Thursdays in its fourth and final season) in courtrooms doing just what the series’ title implies…but rather than engage in courtroom theatrical flourishes like the more celebrated (and longer-running) Perry Mason, the Prestons assisted people who were not particularly popular or well-liked (atheists, abortionists, neo-Nazis, pornographers) but needed legal representation all the same. 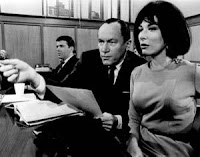 I’d like to be able to celebrate the golden anniversary of this landmark TV drama by getting out some DVDs later today and watching some of The Defenders’ highlights…but unless you’ve acquired the services of a reliable bootlegger, you won’t be seeing episodes of the show on disc any time soon.  (And if you do a look-up for “the defenders” in any DVD search engine more likely than not you’ll end up getting last season’s CBS-TV series starring Jim Belushi and Jerry O’Connell as legal representatives operating out of Vegas…and you don’t want that—trust me.)  Here’s a show that had a fairly impressive run on a major network in the 1960s (four seasons, 132 episodes)...winning a fistful of Emmy Awards while garnering respectable ratings...and yet in all likelihood will probably never see the light of day because its content just isn’t commercially viable.  (Plus…I’ve heard a nasty rumor that the show was filmed—*gasp*—in black-and-white.)  Fortunately, some thoughtful soul has blessed You Tube with a rerun of “The Iron Man,” a first-season episode (starring Ben Piazza and character great Edgar Stehli...and you'll also spot a pre-Dallas Ken Kercheval) that is admittedly not one of the strongest outings in the series.  (The show really didn’t “find its voice” until after the classic “The Benefactor”—the production history of which you Mad Men fans might remember was used as a basis for one of its episodes.)  But beggars cannot be choosers, and I have embedded this video below. 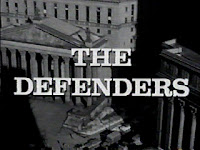 The essays I contribute to my good friend Ed’s blog are always important to me—but this one in particular really stands out as a labor of love…and I consider myself blessed and quite fortunate that I was able to enlist the help of television historian Stephen Bowie, who will forget more about The Defenders than I’ll ever learn.  He went above and beyond the call of duty in assisting me with some of the details on the show’s history, and I am most grateful for his assistance…he is a true mensch.  He blogs, of course, at The Classic TV History Blog…and if you’re not a regular visitor to this one wonderful repository of boob tube history may the fleas of a thousand camels find your cable-ready tent. 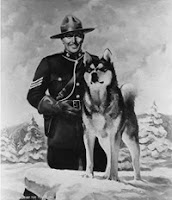 The “big projecto,” as I like to call it around Rancho Yesteryear (I’m sure there’s a reason…in fact, I wrote it down somewhere but I think it may have been accidentally tossed), got wrapped up yesterday—liner notes for a future Radio Spirits release that I’m all-kinds-of-excited about because the collection will contain sixteen broadcasts of previously uncirculated broadcasts of Challenge of the Yukon, the third member of the juvenile adventure triumvirate created by Detroit’s WXYZ (the other two being, of course, The Lone Ranger and The Green Hornet).  I know that a lot of people are a little dismissive of the series (author Gerald Nachman once called it “the Lone Ranger on ice”—something I can’t disagree with) but I find it positively charming; a well-preserved relic of the good old days when we looked at the world in black-and-white.  (Plus the Quaker Puffed Wheat and Puffed Rice commercials—“the breakfast cereal shot from guns!”—are hard to resist.)

I’m going to try my darndest to get my entry finished for Pussy Goes Grrr’s Juxtaposition Blogathon today and with the CMBA Guilty Pleasures Blogathon up a few days later I hope there’ll be some regular-type activity on the blog.  I’m waaay behind on TDOY’s weekly “The Passings Parade;” I’ve got a few TV-on-DVD announcements to trumpet (including one of my Mom’s favorite shows when she was a young’un); and there’s a “Coming Distractions” post waiting in the wings as well.  I’ve been so doggone busy that I’ve even neglected my precious Shreve TV Me-TV…in fact, when I finally took a breather one night to flop out on the bed and watch some of the offerings on my favorite channel I found to my surprise that my TV was no longer picking up the station.  A lesser man would have panicked…so as that lesser man, I predictably began screaming and threatening to slash its tires if it left me…but when I re-searched the selections on my TV set I discovered to my relief that Me-TV had just been moved to a different digital channel.  (A close one, to be sure…)

Where on earth have I been? I just commented on your Juxtaposition article, and then saw this one, which I also missed. I never miss yours -- must have been drinking too much lately...

I've already seen and talked about my opinion of your Defenders article on the Copeland blog, and will just repeat here how special it is. I hope you get a lot of traffic for that article, because it is one of your best.