There’s an episode of The Brady Bunch—it’s a fifth-season outing entitled “Two Petes in a Pod”—in which middle son Peter Brady (Christopher Knight) meets a new transfer student at his school named Arthur Owens…who, strange as it may seem, is a dead ringer for Peter (Owens is also played by Knight).  The newly-introduced “twins” capitalize on this stroke of unbelievably good fortune by switching identities back-and-forth, pranking their families (those rapscallions!)…until a situation arises where Peter really does need the services of Arthur as he’s unable to break two dates in one evening and so his double is roped into helping him keep up the charade…with the usual wacky complications ensuing.

The Germans describe a doppelganger (“double walker”) as, in the words of Wikipedia, “a paranormal double of a living person, typically representing evil or misfortune.  In the vernacular, the word has come to refer to any double or look-alike of a person.”  (Ivan’s note: What’s so interesting about the Brady Bunch episode is that Peter’s double is not particularly evil—in fact, he’s just as bland and nondescript as the real article.)  While there have been on occasion instances of people being the victims of mistaken identity in real life, the old saw about “everyone has a double” is rightfully limited to fiction and folklore.  But situation comedies have taken this concept and ran with it on countless occasions as fodder for their shenanigan-stuffed plots…and I never seemed to mind much as a kid, since despite what many of my friends think sitcoms and documentaries are two separate entities.

You wouldn’t think a “normal” series like The Brady Bunch would have to resort to the doppelganger trope…but Brady was created by Sherwood Schwartz, who recycled this three times on his previous Gilligan’s Island: look-alikes for Mr. Howell (“Will the Real Mr. Howell Please Stand Up?”), Gilligan (“Gilligan vs. Gilligan”) and Ginger (“All About Eva”).  As a point of fact, while skeptics were always bitching about how the show was far-fetched because the castaways never could seem to patch a hole in their boat or had enough clothes to last them as long as they did (even though it was a three-hour tour) I pondered the weightier issues considering the astronomical odds of three people also being shipwrecked on the same island as people who looked exactly like them.  (The Brady Bunch did do variations of this, though—“Sergeant Emma” focuses on a cousin of ’s who may look like the beloved housekeeper but proves to be a bit more of a hardass in the “domestic engineer” department.)  Another series to explore the nature of doppelgangers was F Troop—the character of Corporal Randolph Agarn seemed to have a reservoir of cousins and family members who strongly resembled him (Lucky Pierre, Col. Dimitri Agarnoff, Pancho Agarnado)…and Captain Wilton Parmenter (“Wilton the Kid”) and Sergeant Morgan O’Rourke (“Did Your Father Come from Ireland?”) also boasted of kin that bore more than just the usual shared family DNA. 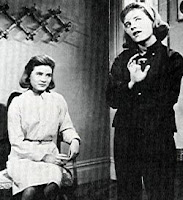 The doppelganger trope was best used in safe capacities when applied to people with familial ties: Samantha had a look-alike cousin in Serena (who was, as the French would say, tres smokin’) and Jeannie had an evil sister, too.  The ne plus ultra of all this was showcased on The Patty Duke Show, on which you not only had identical cousins in Patty and Cathy Lane—but there was an episode entitled “The Perfect Hostess” where the characters on the show got a visit from evil southern belle Cousin Betsy (Patty Duke in a blond wig), demonstrating what happens when cousins are three of a kind.  (My head is exploding!)  This notion of someone just stumbling across a person who looks exactly like you (and possibly being evil…eeeevil!!!) is one of the reasons why I love sitcoms as passionately as I do…and the other day, as I was watching a few reruns of The Joey Bishop Show to commemorate the fiftieth anniversary of its debut on NBC in 1961, I was able to visit Doppelganger Land again (though what makes this “twisted” is that you’d never expect something like this popping up on such a bland, inoffensive Danny Thomas Show-clone like Bishop’s). 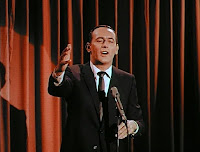 Comedian/talk show host Joey Barnes (Bishop) is entertaining inmates at a state prison…and if you’re expecting the old joke about “a captive audience” you will not be disappointed, though it turns up after he finishes his performance for the incarcerated.  Instead, he’s reduced to gags like “I was a second story man…if the first joke didn’t go over, I told a second story” and because he’s doesn’t receive a shiv in his back during the routine one can safely assume that he “killed.”  At one point during his act, however, he does a routine about what would happen if an old vaudevillian were in “the joint” (a searchlight is shone upon him and he breaks out in a few choruses of Mammy) and as the setup to the bit, we see a shot from back stage, in which a man watches our hero intently… 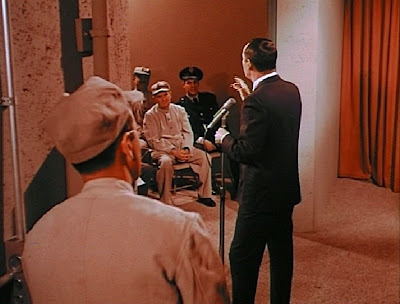 …and then we’re clued in to the stranger’s identity… 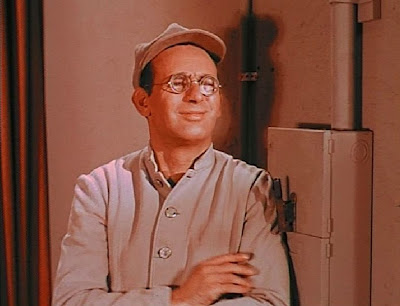 Son of a gun!  The guy could be Joey’s twin “brudder,” providing you remove his Coke-bottle-lens glasses.  (So much for telegraphing the clumsy, heavily-labored plot.) 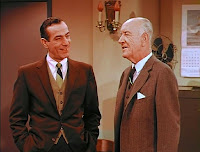 Joey and his manager/best buddy Freddy (Guy Marks) return to the warden’s office—and the CEO of the prison is played by serial stalwart and TDOY fave Addison Richards.  Joey sends Freddy off to bring the car around, and then mentions to the warden that his suitcase and coat are missing.  Laughing, the warden tells his guest that “the boys” put Mr. Barnes’ effects in his office for safekeeping, and then he takes his leave by telling Joey that he needs to conduct a security check… 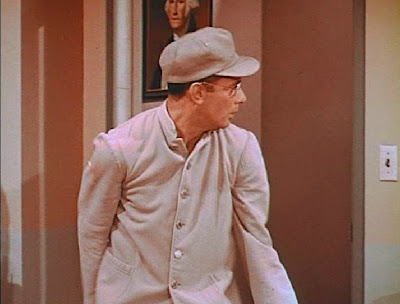 …which, as we can see, apparently was successful beyond the warden’s wildest imagination…since faux-Joey has been allowed to enter the office and…

…quickly dispatch our star with a blow to the head.  (You can’t see it in the preceding picture, but faux-Joey—whose character’s name is “Light-Fingered Louie” is carrying a sap-like object, almost as if he knew where and when the real Joey Barnes would be changing back into his street clothes, and allowing him to truncheon him into a stupor.) 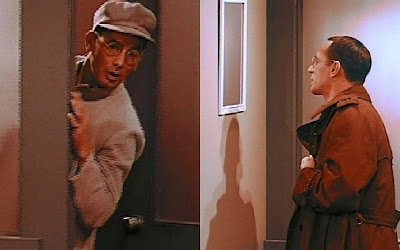 So having successfully switched places with the popular talk show host, Louie admires himself in the mirror (and even practices Barnes’ trademark “Son of a gun!”) and prepares to head for sweet freedom.  But there’s a teensy snag…

…two of the guards in the prison are on the alert that there’s a convict missing!  Hokey smoke, Bullwinkle—it looks like the jig is up for Louie…except that these two schmucks are completely fooled by the convict’s ruse, even taking time to ask for autographs…and not batting an eyelash when the imposter signs his name “Joie.”  (Hoo boy.)

Well, you can pretty much guess where this is going—Louie can only keep up the masquerade for so long (he gets as far as Barnes’ apartment but without his glasses, he mistakenly flags down a patrol car instead of a cab) before Joey has been released when the warden realizes there’s been a huge screw-up.  What this episode can’t explain to my satisfaction is why the warden, upon first meeting Joey Barnes, didn’t say to himself “You know, this entertainer bears an uncanny resemblance to one of the men incarcerated here…could I be taking a chance on letting him continue his act?”  I’m also a little fuzzy on just how Joey managed to convince the guy in the first place that he’s not Louie the Convict if the warden and the men in his employ are that dense.  There’s something ironically bittersweet about this—Georgia sends a man who may have been innocent to his death this week, and Joey is set free simply by telling the prison warden: “Boy, do you have a situation on your hands—I’m Joey F**king Barnes!”

I am, of course, reading a bit too much into all this—because the episode does contain some funny stuff…the highlight is when Joey is taken back to “his cell”…

I’ve slept in hotel rooms that were smaller than that.  (Any resemblance between this cell and what they’re like in real-life is purely the scriptwriter’s imagination.)  Now, in all fairness, it may be a tad roomy because Louis has a roommate, played by an actor who I’ll bet was a friend of the producer: 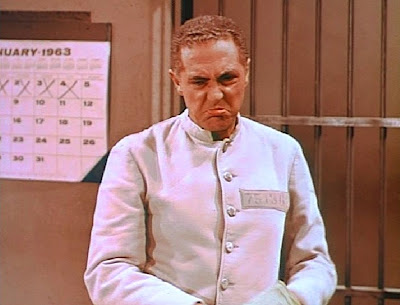 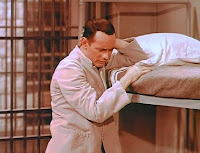 Well, he is a friend of the producer—it’s Sheldon Leonard, of course…though he goes uncredited.  Leonard plays an inmate named Kowalski who responds to a still-disoriented Joey’s queries (“How come I’m wearing a uniform?”) with that trademark “Look-at-me-fellas-I’m-handin’-out-wings” sarcasm (“That shows you made the varsity!”) of his: 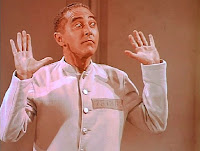 JOEY: Who are you?
KOWALSKI: Well, you see…this is a library, and, uh…I’m Marian the Librarian… (Sotto voce) Keep your voice down, people want to study…
JOEY (after looking around): This isn’t a library, it’s a prison cell!  Hey, I don’t belong in here…I didn’t commit any crime!
KOWALSKI: Yes, you did—don’t you remember?  I had ya picked up ‘cause you owed two cents on your library books!  (After a pause) Come on…take a rest, will ya?  Relax…
JOEY: I don’t know about you, but I’m getting out of here… (He tries to open the cell door, with little success) Hey, the door is closed…how come the door’s closed?
KOWALSKI: Well, you see…they do that because when they don’t do that, it’s very drafty in here… 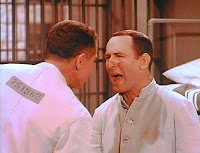 Joey tells Leonard who he is, which prompts the veteran actor-director-producer to crack: “Congratulations, I am Sophie Tucker!”  After a few more choice wisecracks from Leonard’s character, Joey runs to the cell door and yells “Let me out!  I’m Joey Barnes!”  An inmate yells back: “Big deal!  I’m Frank Sinatra!  And I’d like you to meet my roommate, Dean Martin!”  (Thus crossing another Rat Pack in-joke off the list, though Leonard tops it by asserting he’s “Bob Hope” and he’s “just here to entertain the boys in uniform.”)

Look at you, Mr Prolific Pants. You've posted more this week than I do in a month.

I have never seen a second of the Joey Bishop Show. Bishop is not a funny guy; he dragged Who's Minding the Mint down every time he was on screen, even when he was in the background. And he sucked on Match Game. Yeah, I said it, and I'll say it again if I have to.